Accessibility links
Review: 'Loathe At First Sight,' By Suzanne Park Suzanne Park's debut adult novel is a crackling romance starring a young woman trying to make it in the extremely male-dominated gaming industry — can she find love AND a career? Signs point to yes. 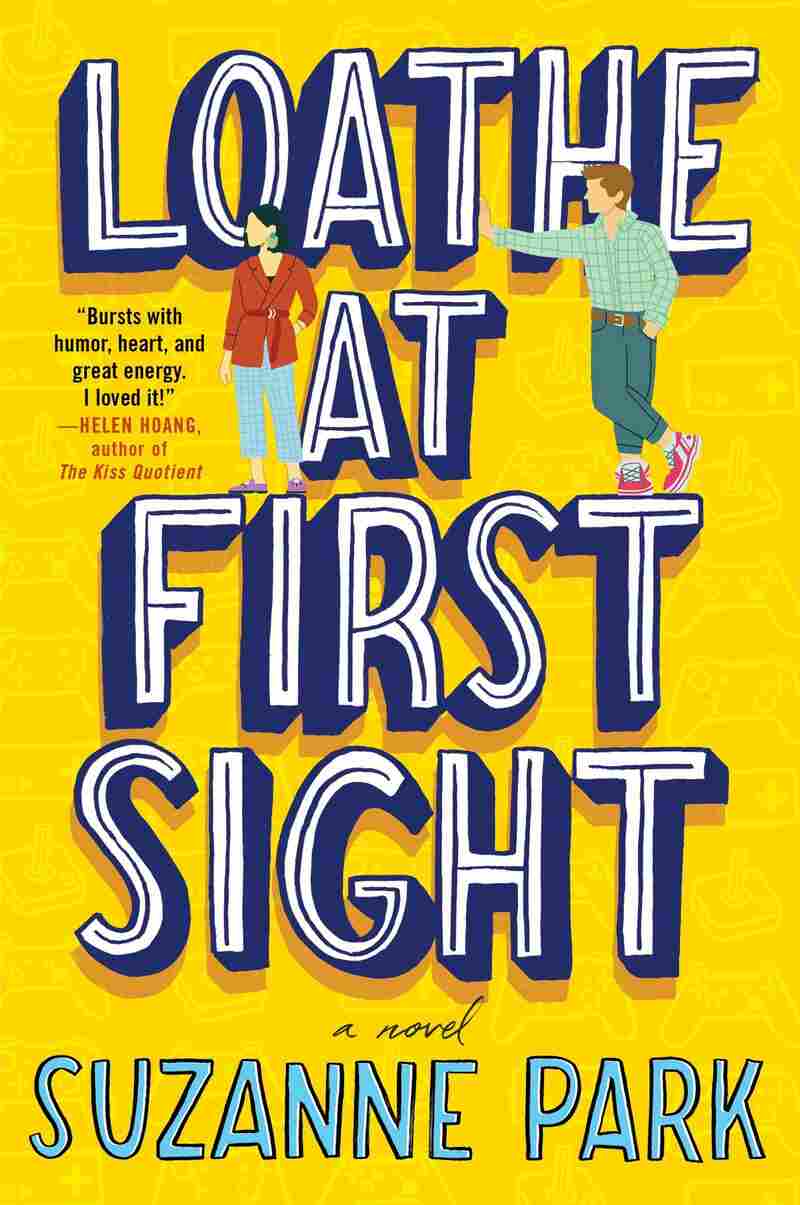 A genuinely funny and charismatic heroine shines in Loathe At First Sight, the delightful and eye-opening debut adult novel by Suzanne Park.

Don't be fooled; the story isn't the trope-laden tale you might expect from the title. Sure, several characters speed onto the enemy lane. Still, Park — a former stand-up comedian — negotiates her energized plot masterfully, with an engaging main character who doesn't hold back when faced with a sexist boss, an Internet stalker, or a belligerent officemate.

Melody Joo, a Korean American, is a new production assistant at Seventeen Studios, her first job in the very male-dominated gaming industry. She doesn't expect it to be easy — and still, she's shocked, offended, and angry when struck at the blatant sexism and racism at Seventeen, which flows directly from the desk of CEO Ian MacKenzie.

Melody's first week is a cautionary tale about how a situation can go from bad to worse to Oh. My. God. She gets kicked out of her cubicle in favor of the CEO's nephew, Nolan MacKenzie, to whom she gives a middle nickname that's — let's just say it's NSFW.

Later, she runs into the nephew and calls him by his new full name — including the part she added. It could be an embarrassing moment, but Melody's not that concerned. She just wishes she were better at self-censorship. In other words, she speaks her mind more often than not, and lets the bitcoins fall where they may. Her tongue is just as sharp when she faces off with her new officemate, Asher, an arrogant, monosyllabic manchild (and yes, I relived an old workplace bully courtesy of Asher).

Soon, Melody gets a remarkable opportunity: The CEO appoints her production lead for the launch of a new game targeting women. Melody likes a challenge; she's excited, but only somewhat, because the appointment puts her right in the lion's den. Co-workers (Asher!!) want to know how, why, and what she did to win the lead spot. Rumors and innuendo fly that her skills as a team leader had little or nothing to do with her new position.

The price for notoriety is another subject Park explores: Jealousy runs wild at Seventeen Studios, and Melody's harassment in and out of the workplace quickly escalates from annoying to disturbing. Melody is written about, talked about, stalked and targeted by gamers online who make disparaging remarks about her and her game. She is even doxed, leaving her wondering who she can trust.

Trust is a theme with lots of bandwidth in Loathe At First Sight. Melody trusts her abilities, but not her co-workers. She is most comfortable on her own, not working with a team. On the other hand, outside the office, Melody's two BFF's — Candice and Jane — are her rock. Despite their differences, the close-knit trio are in each other's corners, particularly as they deal with the considerable changes in their respective lives.

Melody also trusts her parents — in a way. She trusts them to give her a hard time about not having a husband, not pursuing a career they can relate to, and not calling them often enough. Her mother, in particular, is quick to share her displeasure about Melody's life choices. But none of the criticism is spiteful or cruel. Melody's parents are authentically endearing; their concern comes from a love and affection that makes readers take them seriously.

'Loathe At First Sight' is a sweet romance about a young woman's quest to gain her stripes in an industry she loves — and a good man who doesn't mind taking a back seat and letting his heroine shine.

I am not a gamer, which may explain why I initially found Park's gaming world jarring. The back-stabbing, the in-your-face racism, the misogyny, the name-calling, egos-on-steroids — but then I Googled. And I learned that Parks' inspiration for Loathe At First Sight could well have been pulled from the headlines.

And oh yes — this novel is a romance, but there are so many coworkers to loathe at Seventeen Studios. Not sure which way to turn, I didn't want to fall in love with a prospective suitor only to learn Melody was 150% right about him in the worst way. So when I fell, anxiety plagued me. What if I was wrong? What if it turns out he's not the guy for her? Then again, what if he is? My advice — keep reading, you'll love finding out.

Loathe At First Sight is a sweet romance about a young woman's quest to gain her stripes in an industry she loves — and a good man who doesn't mind taking a back seat and letting his heroine shine.

In the end, Park delivers a multi-layered happy-ever-after where our heroine is not only a wizard in the gaming industry, she's pretty magic at romance, too.