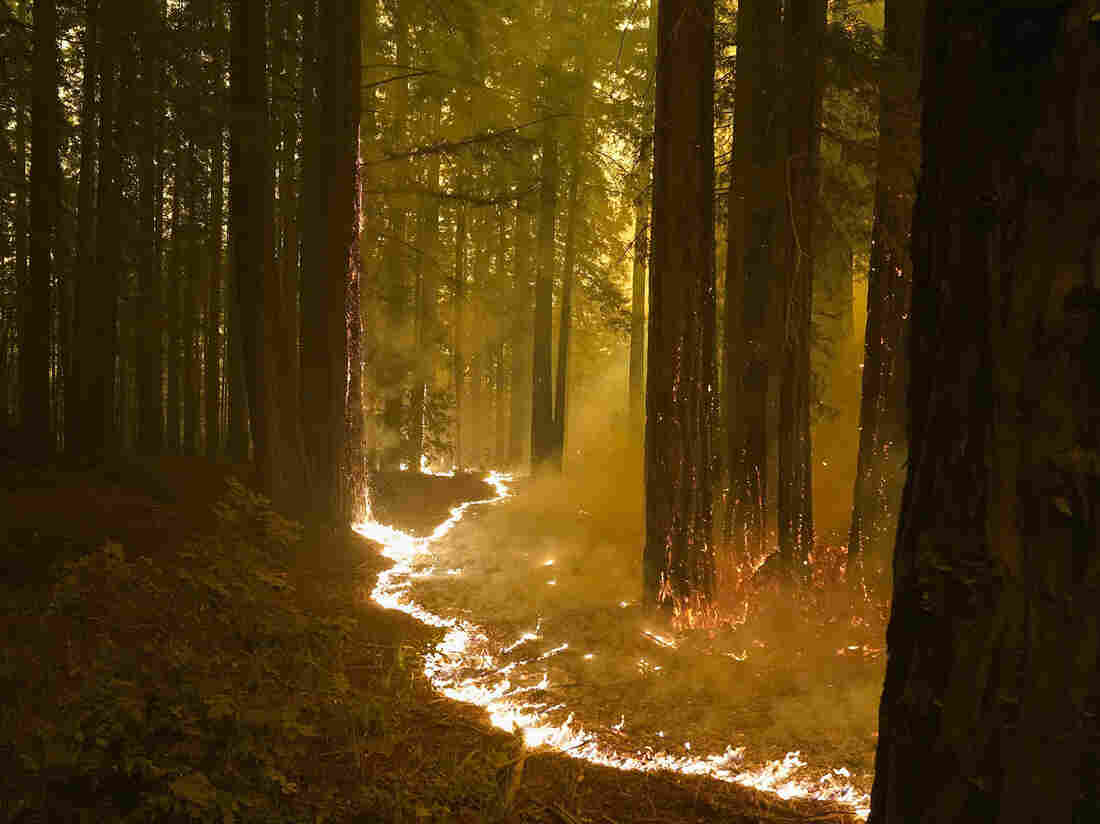 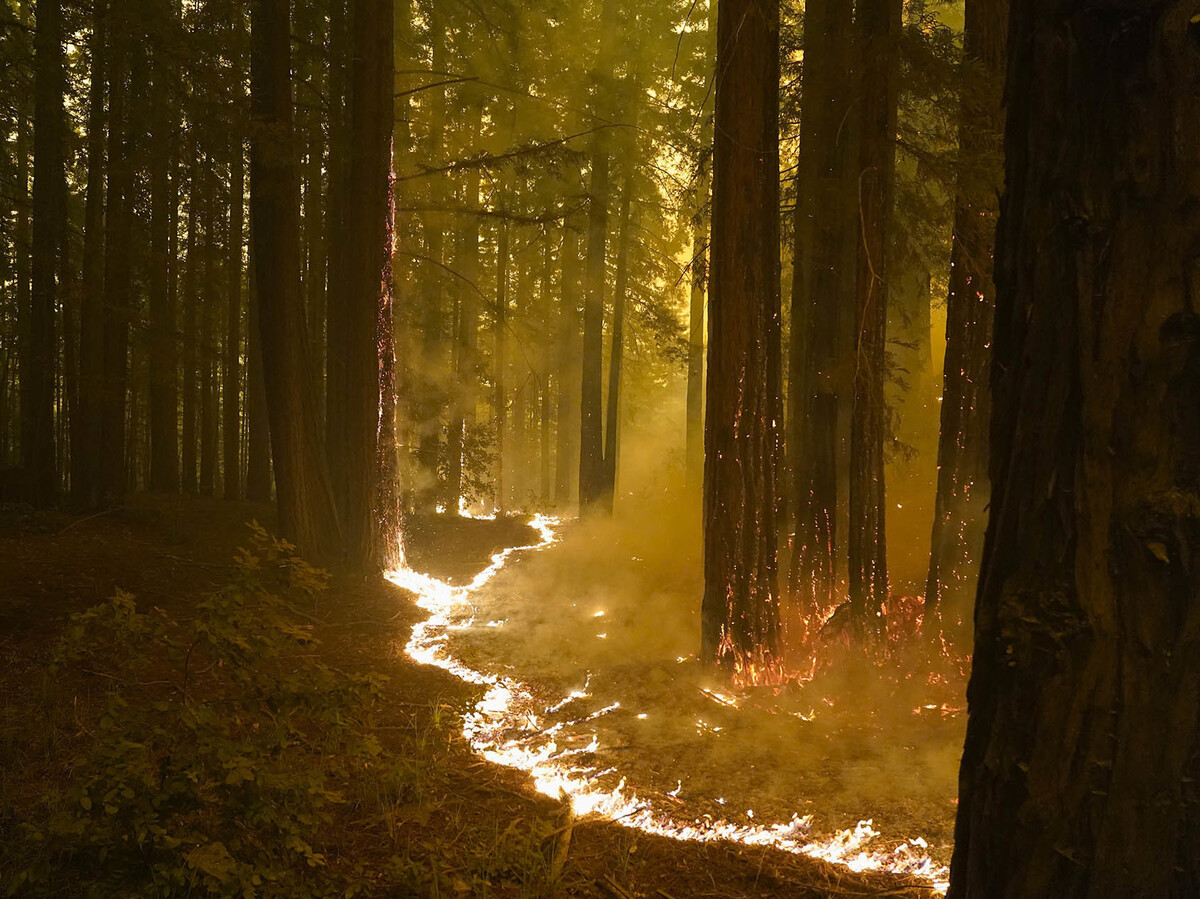 A redwood forest caught in the CZU Lightning Complex Fire on the Northern California coast.

At 3 a.m. on Friday morning, biologist Kelly Sorenson was awake, nervously watching the live webcam feed of a California condor nest on the Big Sur coast. He could see a 5-month-old chick, still unable to fly, as the flames of the Dolan Fire came into view.

"It was just terrifying," Sorenson said. "Having the live-streaming webcams was both a blessing and a nightmare because we had to watch the fire as it burned through the canyon."

California's massive wildfires have burned more than 1,000 homes and buildings over the last week, destroying irreplaceable possessions and memories for some residents. At the same time, the fires are also threatening some of the state's rare ecosystems and wildlife.

Biologists are watching closely as the blazes encroach on old-growth redwood trees in Northern and Central California, where some giants are more than 1,000 years old and are known by individual names. While some seem to have been spared, Big Basin State Park — the oldest state park in California — saw significant fire damage.

Still, biologists say there are reasons to be hopeful, because redwoods have incredibly thick bark that can withstand wildfires. Even fully charred trees can sprout again.

The larger question is whether ecosystems can fully bounce back after extreme fires given that the climate change, already driving the current wildfires, can also make recovery difficult through heat stress and drought.

For the endangered California condors, recovery is still tenuous. In 1987, just 27 birds remained. Scientists brought them into captivity to begin a breeding program. Today, there are about 100 condors free-flying on California's Central Coast. The Ventana Wildlife Society, where Sorenson is executive director, has been carefully tracking and releasing them.

The massive birds, with a 9-foot wingspan, are still threatened by lead poisoning since they feed on the carcasses of animals that have lead bullet fragments from hunters.

Of the eight condor nests with chicks this year, Sorenson says five are within the fire zone.

"Even just four or five birds would be a huge loss," says Sorenson. "It's just really nerve-wracking now, not knowing."

Still, Sorenson is hopeful some chicks made it. In 2008, condor chicks survived a wildfire in Big Sur, protected by the tall redwood trees they nested in.

"We were convinced there was no way the chicks could survive the fire," he said. "Sure enough, a chick survived and we named it Phoenix."

Redwood trees are built to survive fires, insulated by bark up to a foot thick. While lightning-caused fires aren't as common in coastal redwood habitat as they are elsewhere in California, burning is still a natural cycle in the ecosystem. Native American tribes often set regular fires to shape the landscape and encourage certain plants to grow.

"Because of their resilience, I feel a lot more hopeful than super worried about the trees," said Kristen Shive, director of science for Save the Redwoods League. "The trees really are so incredibly tough when it comes to fire. Most of them will persist and survive."

Even trees that look significantly scorched are still alive and can regrow from their base. Many of the largest redwood trees growing today show burn scars.

"If a fire is hot enough to consume the entire crown of a tree, in a pine tree, that tree is most likely dead," Shive said. "But in redwoods, they have these buds that lie dormant under their bark and they can sprout after the fire."

Still, the younger generation of redwood trees may be more at risk. Around 95% of California's redwoods were logged, so the majority growing today are newer, "second-growth" trees. Those forests tend to be denser, allowing wildfires to burn hotter and spread more easily.

Much like other California landscapes, vegetation in some redwood forests is heavier than it used to be. As wildfires were suppressed in the modern era of firefighting and Native American tribes were removed by settlers from their land, there were fewer regular fires to clear out the forest floor.

Shive says setting controlled or "prescribed" fires in redwood forests will be even more essential as the climate warms, to prevent wildfires from doing too much damage. While redwoods are able to bounce back, they're already stressed by hotter temperatures and drought at the southern end of their range, potentially interfering with their recovery.

"We still need to be setting these forests up to be as fire-resilient as possible, since, as we've seen in this last week, this warmer and drier future is already upon us and it's going to get worse," she said.