4:56
To Manage Wildfire, California Looks To What Tribes Have Known All Along 4:56

Elijah Knight of the North Fork Mono tribe lights grass on fire as part of a broadcast burn, which is a controlled application of fire to fuels.

On a cool February morning, around 60 people gathered in the Sierra Nevada foothills to take part in a ceremony that, for many decades, was banned.

Men and women from Native American tribes in Northern California stood in a circle, alongside university students and locals from around the town of Mariposa. Several wore bright yellow shirts made of flame-resistant fabric. For the next two days, the group would be carefully lighting fires in the surrounding hills.

Also sprinkled throughout the crowd were officials from the state government, which a century ago had largely prohibited California's tribes from continuing their ancient practice of controlled burns.

Fire has always been part of California's landscape. But long before the vast blazes of recent years, Native American tribes held annual controlled burns that cleared out underbrush and encouraged new plant growth.

Now, with wildfires raging across Northern California, joining other record-breaking fires from recent years, government officials say tackling the fire problem will mean bringing back "good fire," much like California's tribes once did.

"We don't put fire on the ground and not know how it's going to turn out," Ron Goode, tribal chairman of the North Fork Mono, tells the group. "That's what makes it cultural burning, because we cultivate." 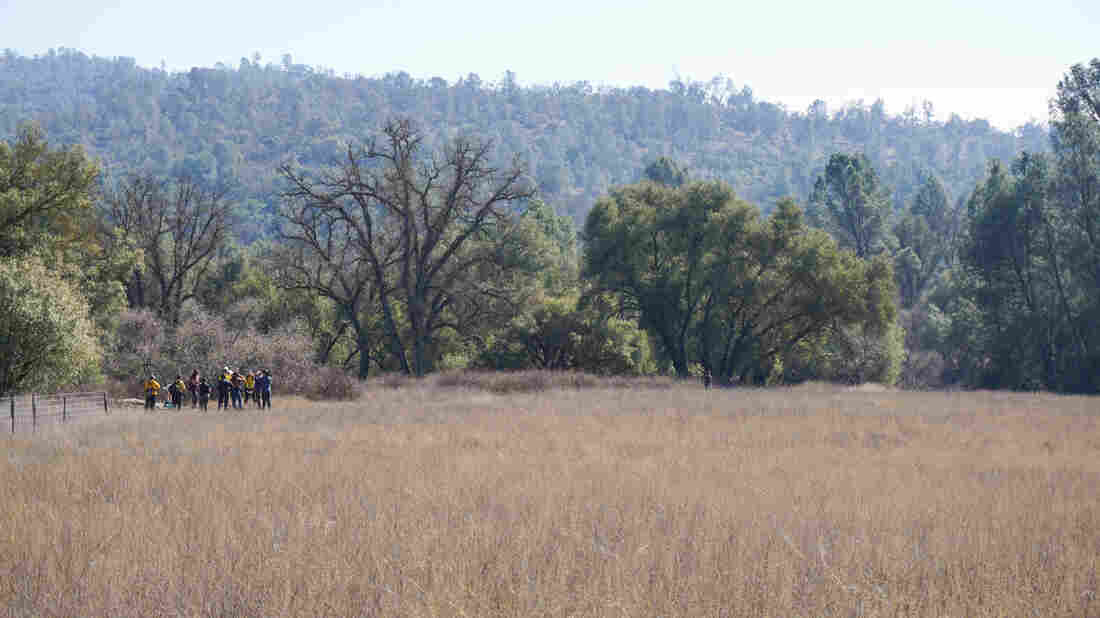 A group of men and women from Native American tribes in Northern California, university students and locals from around the town of Mariposa gather at the beginning of two days of lighting fires in a series of controlled burns. Lauren Sommer/NPR hide caption

But fire suppression has only made California's wildfire risk worse. Without regular burns, the landscape grew thick with vegetation that dries out every summer, creating kindling for the fires that have recently destroyed California communities. Climate change and warming temperatures make those landscapes even more fire-prone.

So, tribal leaders and government officials are forging new partnerships. State and federal land managers have hundreds of thousands of acres that need careful burning to reduce the risk of extreme wildfires. Tribes are eager to gain access to those ancestral lands to restore traditional burning.

"This is old land," Goode tells the circle. "It's been in use for thousands and thousands of years. And so what we're doing out here is restoring life." 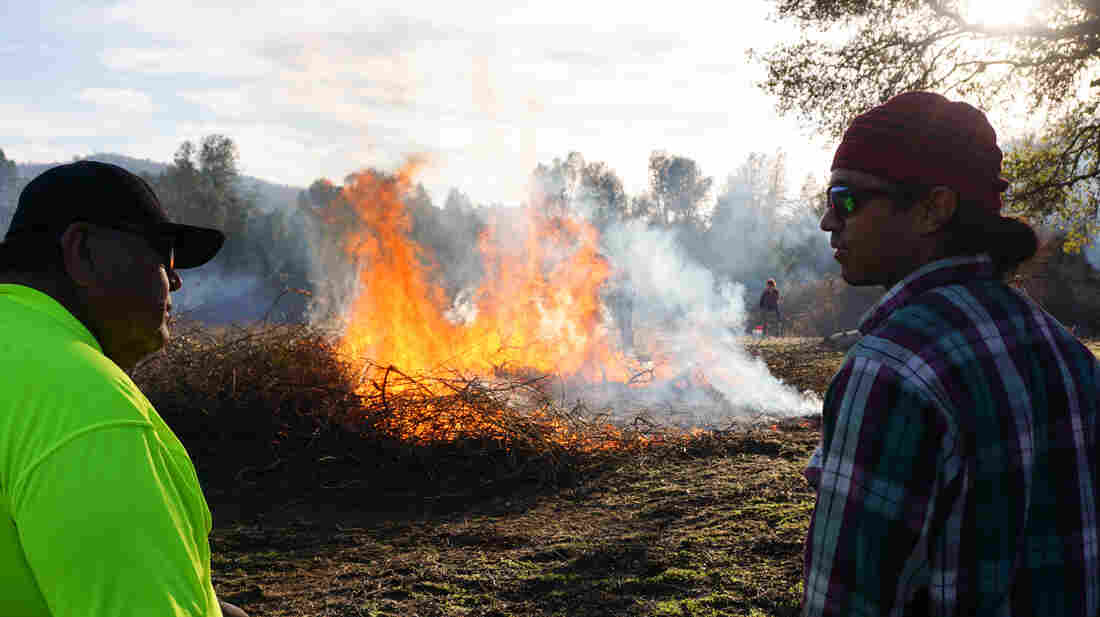 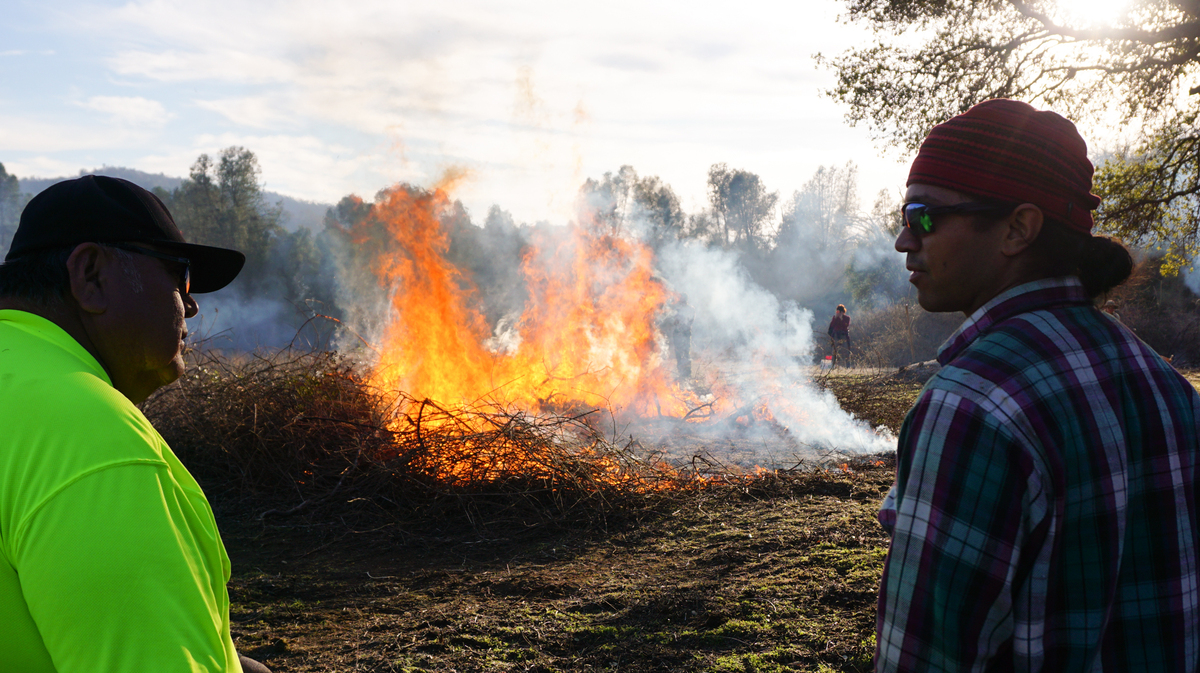 Ron Goode and Ray Gutteriez keep an eye on a burning sourberry bush.

After a blessing, the group grabs shovels and chainsaws before heading out into the brush. It's late winter, and Mariposa's oak woodlands are dry and largely dormant, which is when controlled burning is safest.

The group begins harvesting the long branches, which are used in traditional basket-weaving. It can take hundreds of branches to create just one piece.

Ray Gutteriez then takes a lighter to burn the plant, which encourages new growth that produces the flexible, straight branches prized by weavers. The plant is adapted to fire. Its root stock remains intact after burning and will quickly resprout after spring rains.

"All of our basket material needs to be tended to in some way," says Gutteriez, an ecologist and member of the Wuksachi Band of Mono Indians. "So they need to be burned, and they're used to being burned. And then next year, we'll probably have sticks that are 6, 7 feet tall in one year."

The group also burns a large field, several acres across, which is choked with dead grass.

"When I was a kid, I learned from my mother," Goode says of when he first started doing cultural burning. "But my mother got in trouble when she burned because the fire department didn't want her doing what we're doing today."

Althea Walker rakes the ashes of a sourberry bush. Raking is an important step, so the ashes are mixed into the soil to accelerate the process of plant regrowth.

Before 1800, several million acres burned every year in California due to both Indigenous burning and lightning-caused fires, far more than even the worst wildfire years today. Tribes used low-grade fires to shape the landscape, encouraging certain plants to grow both for tribal use and to attract game.

The arrival of Western settlers dramatically changed the fire regime.

"They came with their concepts of being afraid of fire," Goode says. "They didn't understand fire in the sense of the tool that it could be to create and what it did to help generate and rejuvenate the land. So they brought in suppression."

The U.S. Forest Service infamously had the "10 a.m. policy": to put out all forest fires by 10 a.m. the next day. Without regular fires to clear out underbrush, forests quickly became overgrown, creating the conditions for more extreme fires.

"A cultural burn is very spiritual," Keith Turner of the North Fork Mono says. "I used to fight fire for the Forest Service. And it was all about fighting fire."

Native American tribes were forcibly displaced, and their religious ceremonies were banned throughout the state by the early 1900s.

"There was actually a bounty on California Indian people," says Beth Rose Middleton Manning, professor of Native American studies at the University of California, Davis. "The governor had announced a war of extermination. So you have all that history, and it really fostered removal — settler ownership of Indigenous lands."

Now, Goode and other tribal leaders have been reaching out to ecologists, researchers and fire agencies about the importance of Indigenous knowledge.

"I think it's really important that we don't think about traditional burning as: what information can we learn from native people and then exclude people and move on with non-natives managing the land," Middleton Manning says. "But that native people are at the forefront and leading." 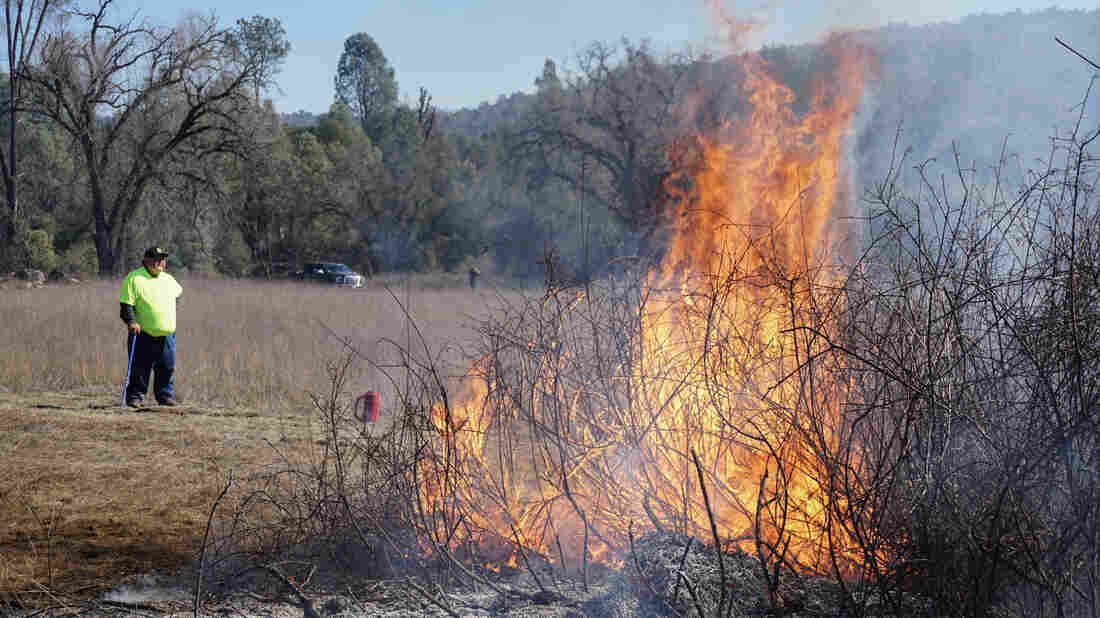 Goode looks on as sourberry bushes burn. After the bushes are burned in the winter, they sprout again in the spring. Lauren Sommer/NPR hide caption 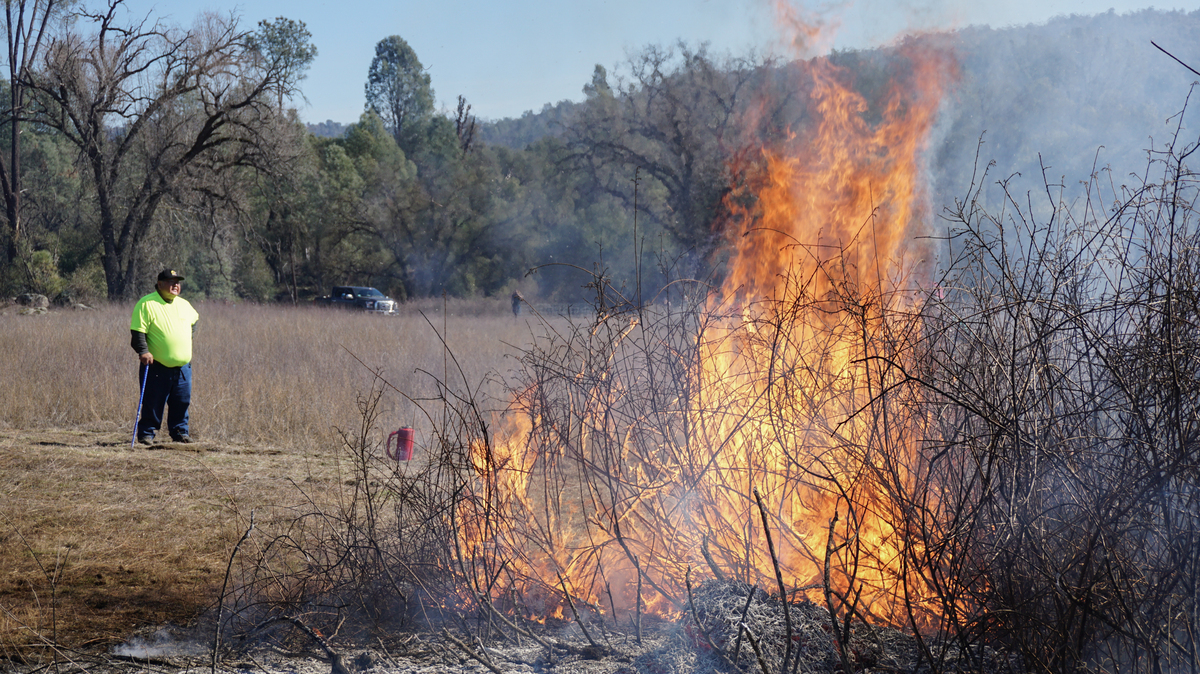 Goode looks on as sourberry bushes burn. After the bushes are burned in the winter, they sprout again in the spring.

With wildfires causing record-breaking destruction in the last few years, California has committed to reducing the vegetation on a half-million acres. The federal government has set a similar goal. But there's a long way to go to reach those numbers, and controlled burning can be challenging in landscapes with too much fuel.

"Fire is a very wicked problem when you have years of suppression, because the longer you don't have fire in the system, the harder it is to put it back in," says Jonathan Long, ecologist with the Forest Service's Pacific Southwest Research Station. "So what we're trying to do is get these footholds."

In Northern California, the Karuk and Yurok tribes have partnered with the Forest Service to manage land for traditional values and wildfire management. Studies have shown that the two goals work hand in hand.

"By having these partnerships with the tribes, I think we can get that very frequent use of fire back in the system," Long says.

Dirk Charley, tribal relations specialist and member of the Dunlap Band of Mono Indians, places a few branches onto the remaining flames of the broadcast burn.

Jennifer Montgomery uses a drip torch, essentially a beefed-up lighter, to spread a line of fire at the corner of a field. As director of California's Forest Management Task Force, she knows the state is working against the clock to address its growing wildfire risk.

"It's an opportunity for me to see how effective cultural fire can be in addressing the issues we have around uncontrolled wildfire," Montgomery says. "The work that we did today, if a fire comes through there, it will drop down to the ground and frankly it may, given the right circumstances, just stop the fire entirely on its own."

Still, it's early days in developing these partnerships for many tribes, particularly after a long history of inequality created and reinforced by the government. Many California regional air regulators require burn permits over concerns about smoke and air pollution. Some counties offer special permits for tribes to facilitate their burns, but others don't.

Goode says he is hoping that bringing together a wide network of researchers, officials, students and tribes will help those conversations happen faster.

"I'm excited," he says, looking across the blackened field in the early evening light. "I'm elated. Because I'm looking around at what we've done. How beautiful the land is looking. And it is. It is."