Accessibility links
Storm Watch: Marco Makes Landfall, Laura Predicted To Be Category 2 Hurricane In Gulf Tropical Storm Laura is expected to make landfall on the Texas-Louisiana border late Wednesday or early Thursday. Forecasts have both storms bringing heavy rain to some of the same areas in Louisiana. 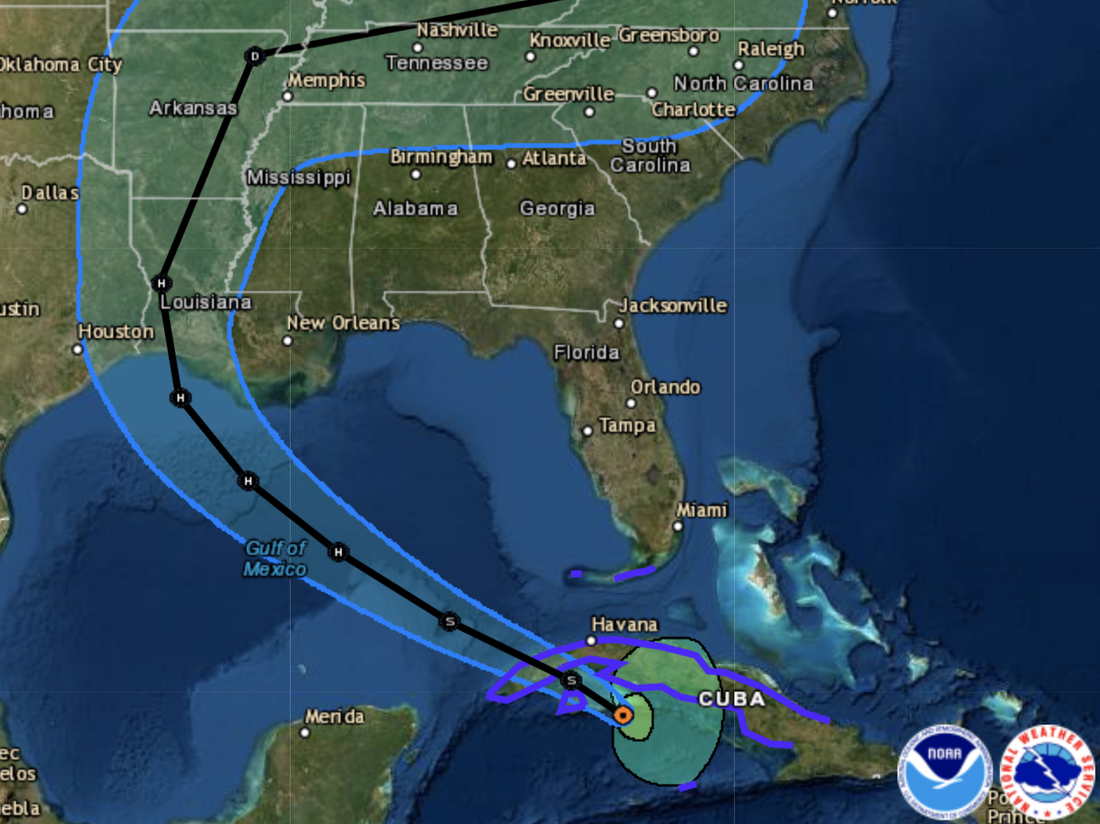 Tropical Storm Laura will become a hurricane by early Tuesday, forecasters say. The storm could make landfall near the Texas-Louisiana border — and it will remain dangerous as it moves inland. NOAA/NESDIS/STAR GOES-East hide caption 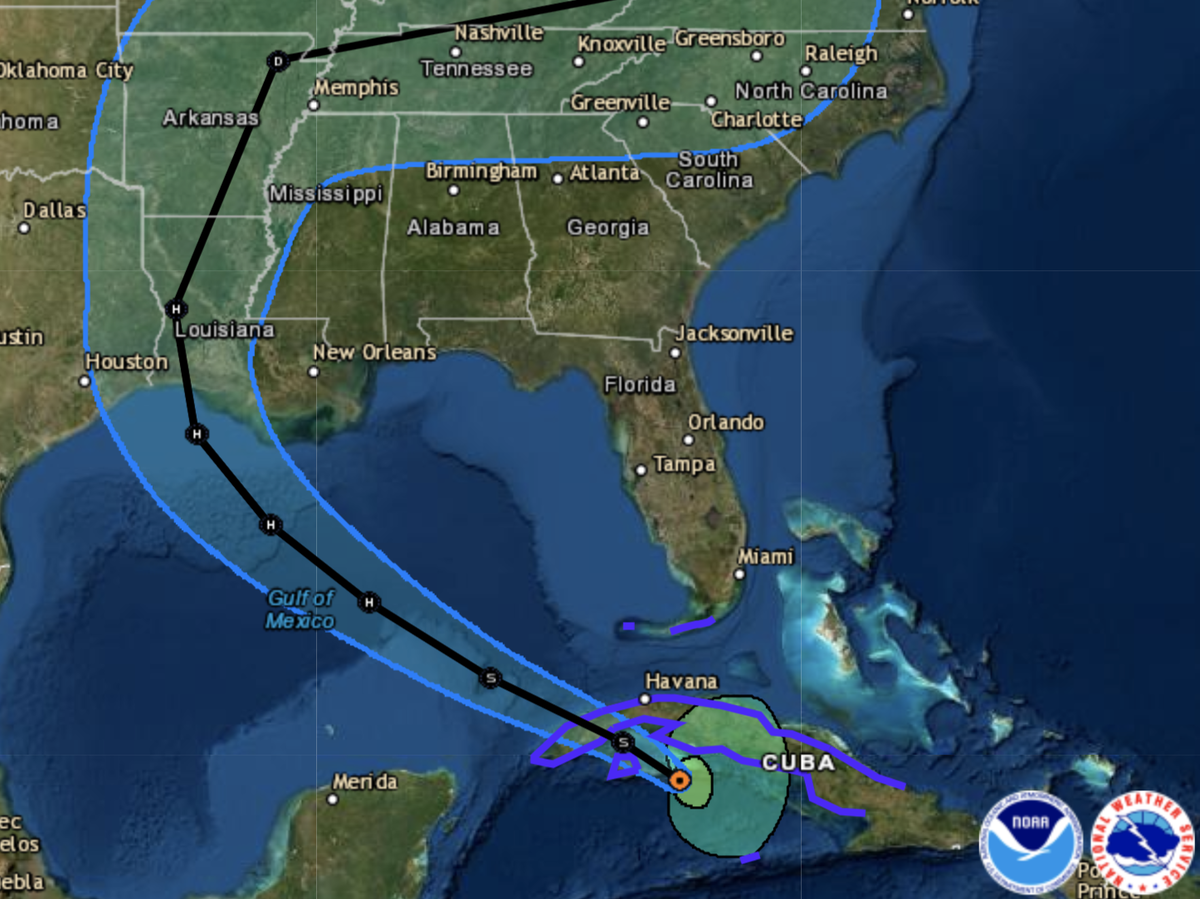 Tropical Storm Laura will become a hurricane by early Tuesday, forecasters say. The storm could make landfall near the Texas-Louisiana border — and it will remain dangerous as it moves inland.

Tropical Storm Marco has made landfall near the mouth of the Mississippi River but it is Tropical Storm Laura that has Louisiana and Texas residents bracing for what could be the strongest storm since 2005's Hurricane Rita — still ranked as the most intense tropical cyclone on record in the Gulf of Mexico.

The National Hurricane Center says Marco is no longer a tropical storm and has rapidly lost wind speed and organization as it has approached southern Louisiana.

The storm currently has sustained winds of 35 mph.

🌀 Here is the 10pm Advisories from @NHC_Atlantic for Tropical Storm #Laura & now Tropical Depression #Marco. Laura is beginning to emerge into the Gulf of Mexico while Marco is expected to become a remnant low Tuesday. #LAwx #MSwx pic.twitter.com/5EvPY1FHqQ

Unlike Marco, which grew weaker as the day carried on, Tropical Storm Laura is gaining strength. Officials expect it to make landfall near southern Louisiana or the east Texas coastline late Wednesday as a Category 2 storm, if not stronger.

As of Monday evening, the New Orleans arm of the National Weather Service cautioned Laura's path will likely bring it into the Gulf by nightfall and strengthen into a hurricane over the water during the day on Tuesday.

Early forecasts had called for landfall near the Florida panhandle.

Latest 7 PM CDT update for Tropical Storm #Laura. #Laura is expected to move into the Gulf tonight and strengthen into a hurricane during the day tomorrow. Remain vigilant of #Laura over the next couple of days. #lawx #mswx pic.twitter.com/ucDYgKS8mo

Louisiana Gov. Bel Edwards urged people to take advantage of the day-long window before Laura strikes to prepare for the hurricane. During an evening news conference the governor cautioned residents to anticipate heavy rains, storm surges and the possibility of tornadoes, "including areas outside the storm's central path," member station WWNO reported.

"Everybody should understand this is going to be a very large, very powerful storm," he said.

Meanwhile, Marco struck the edge of the Mississippi River in Louisiana at about 6 p.m local time with maximum winds of 40 mph, NBC affiliate WDSU reported.

The National Weather Service says data indicate that Marco is producing tropical-storm-force winds in a small area, but that they will likely subside during the next few hours as the storm moves along the coast of Louisiana.

Heavy rain will continue along portions of the north-central Gulf Coast through Monday night.

During an earlier press briefing, National Hurricane Center Director Ken Graham noted that Laura is expected to pick up power from the warm waters of the Gulf.

The new forecast has Laura drenching some of the same parts of Louisiana that Marco will douse in the early part of this week.

For #Laura, conditions are likely to begin deteriorating along the northern Gulf coast on Wednesday, but they could begin as early as Tuesday night for some areas. If you live near the #Louisiana or upper #Texas coasts, TODAY and TUESDAY are the days to prepare for the storm! pic.twitter.com/uqkmql4JOM

Marco's downpour has already reached a large area of the Florida panhandle and southern Alabama and Georgia, dropping 8 to 9 inches of rain far from its center. It is is expected to do the same as it rolls across Louisiana and into Texas.

It's the result, Graham says, of a strong wind shear that tilted Marco and "blew all that moisture and the convection off to the east."

By late this week, "Laura is expected to produce rainfall of 4 to 8 inches, with isolated maximum amounts of 12 inches across portions of the west-central U.S. Gulf Coast near the Texas and Louisiana border" and inland areas, the hurricane center says.

Laura which is just south of Cuba, is expected to enter the Gulf of Mexico soon where the water temperatures are some of the hottest anywhere on earth.

Forecasters say those conditions will lead to a rapid intensification.

It currently has sustained winds of 65 mph. Laura is predicted to be near or at 'major' hurricane strength of 110 mph or more as it makes landfall. A 'hurricane watch' is now posted along parts of Texas and Louisiana. 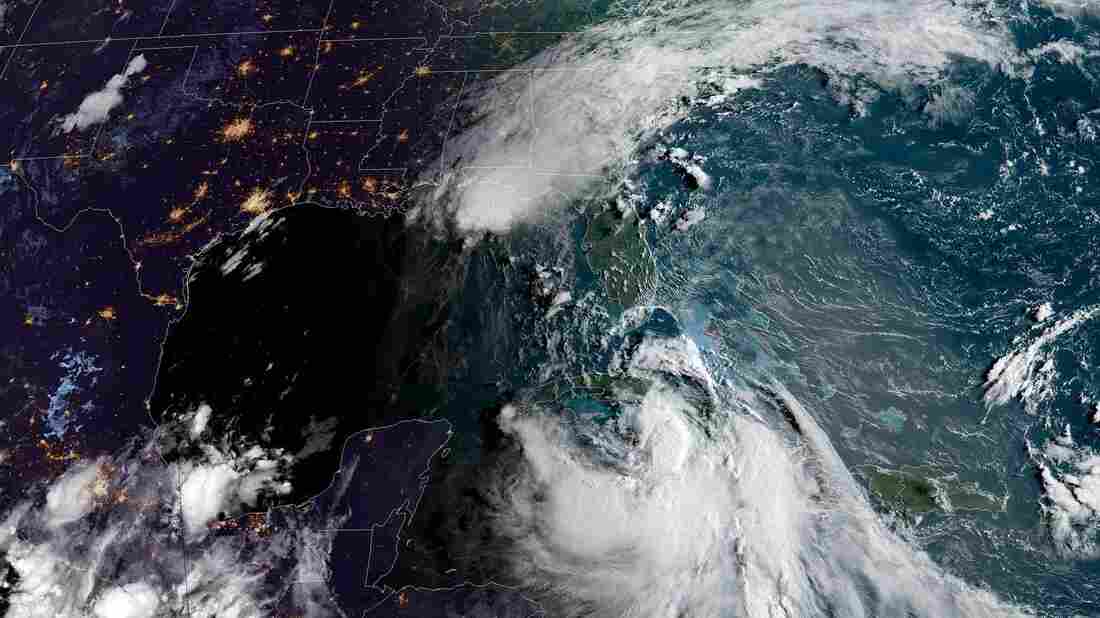 Tropical Storm Marco (top) is weakening as it nears the Gulf Coast in Louisiana, while Tropical Storm Laura (bottom right) — currently just south of Cuba — is on track to become a hurricane. NOAA/NESDIS/STAR GOES-East hide caption 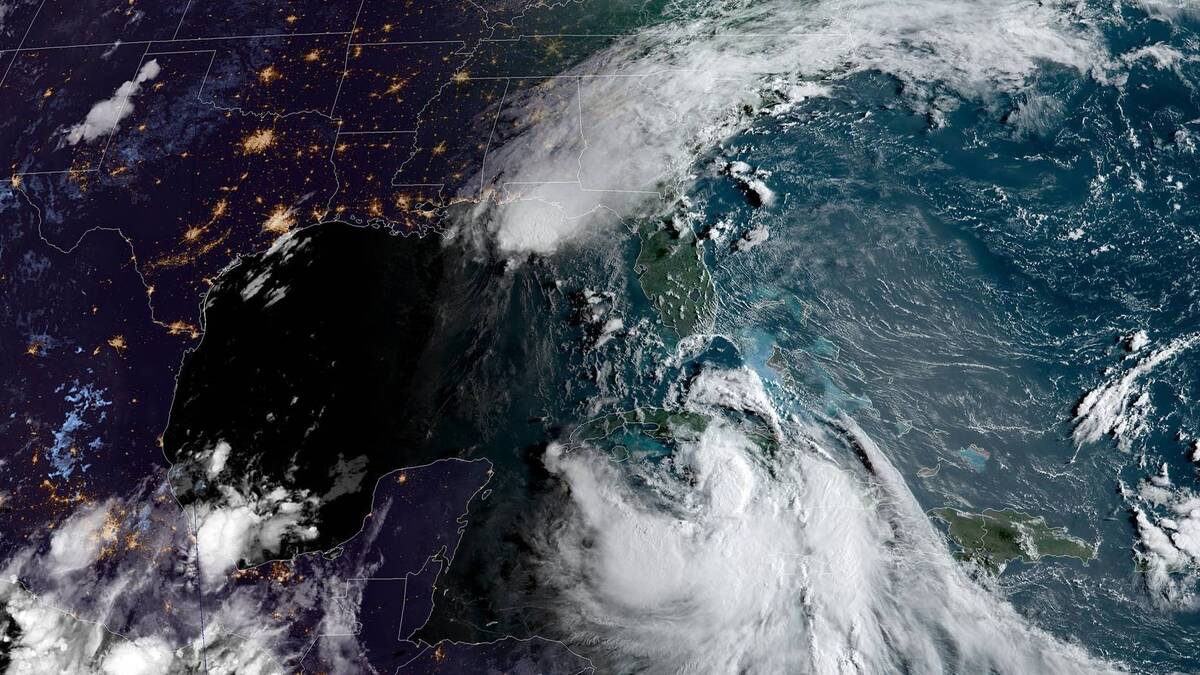 Tropical Storm Marco (top) is weakening as it nears the Gulf Coast in Louisiana, while Tropical Storm Laura (bottom right) — currently just south of Cuba — is on track to become a hurricane.

Laura's worst impact in the U.S. will be seen from late Wednesday into Friday. Federal forecasters say its intense rainfall could spark "widespread flash and urban flooding" and possibly cause some streams and rivers to flood.

Laura has triggered tropical storm warnings in parts of the Cayman Islands and Cuba, as well as in the Florida Keys from Craig Key to Key West — and farther west, out to Dry Tortugas National Park.

The biggest threat from Marco is now due to its rainfall. The storm could produce "accumulations of 2 to 4 inches with isolated maximum amounts of 7 inches across portions of the northeast and north-central Gulf coast through Tuesday," according to the hurricane center.

Forecasters discontinued all coastal watches or warnings on Monday as the storm weakened — a relief to residents of Louisiana and Mississippi who had earlier been warned of a potential storm surge of 2 to 4 feet.

Another complicating factor: Louisiana is already coping with a COVID-19 outbreak, reducing capacity for shelters and evacuation efforts.

"The first 72 hours is on you," Edwards told residents on Sunday. "That is because the second storm comes in so close that there may not be much of a window when we can fly search-and-rescue helicopters, when we can get out with high-water vehicles and those sorts of things."

Climate change has been linked to the more frequent occurrence of major hurricanes globally as well as the rising number of hurricanes in the Atlantic. In addition to strong winds, many of the most dangerous storms in recent years have brought tremendous amounts of rain – creating new threats to people and infrastructure farther inland.