Accessibility links
Trump's Handling Of COVID-19 In The Battleground States The president has touted reopenings by Republican governors and opposed restrictions by Democratic governors. Take an in-depth look at his response to the coronavirus in seven key battleground states. 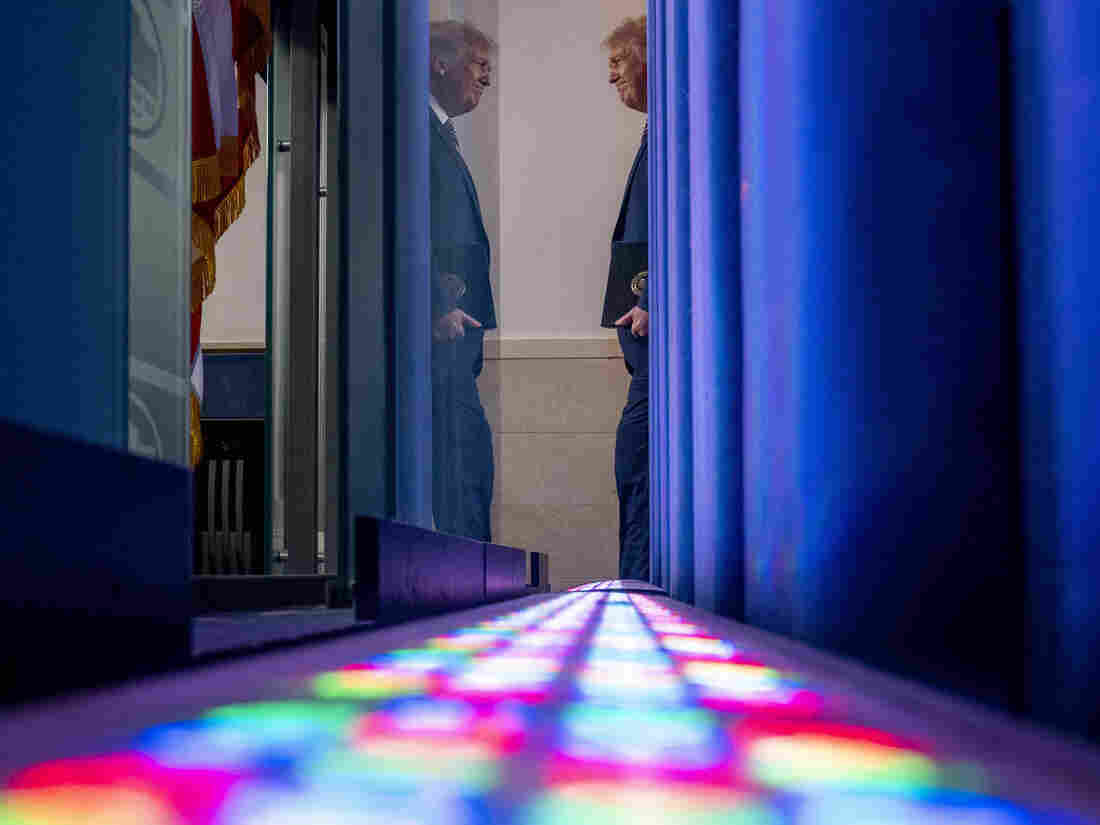 President Trump's tune on coronavirus progress and lockdown success changes depending on which state he is in and which governor he is talking about. Andrew Harnik/AP hide caption 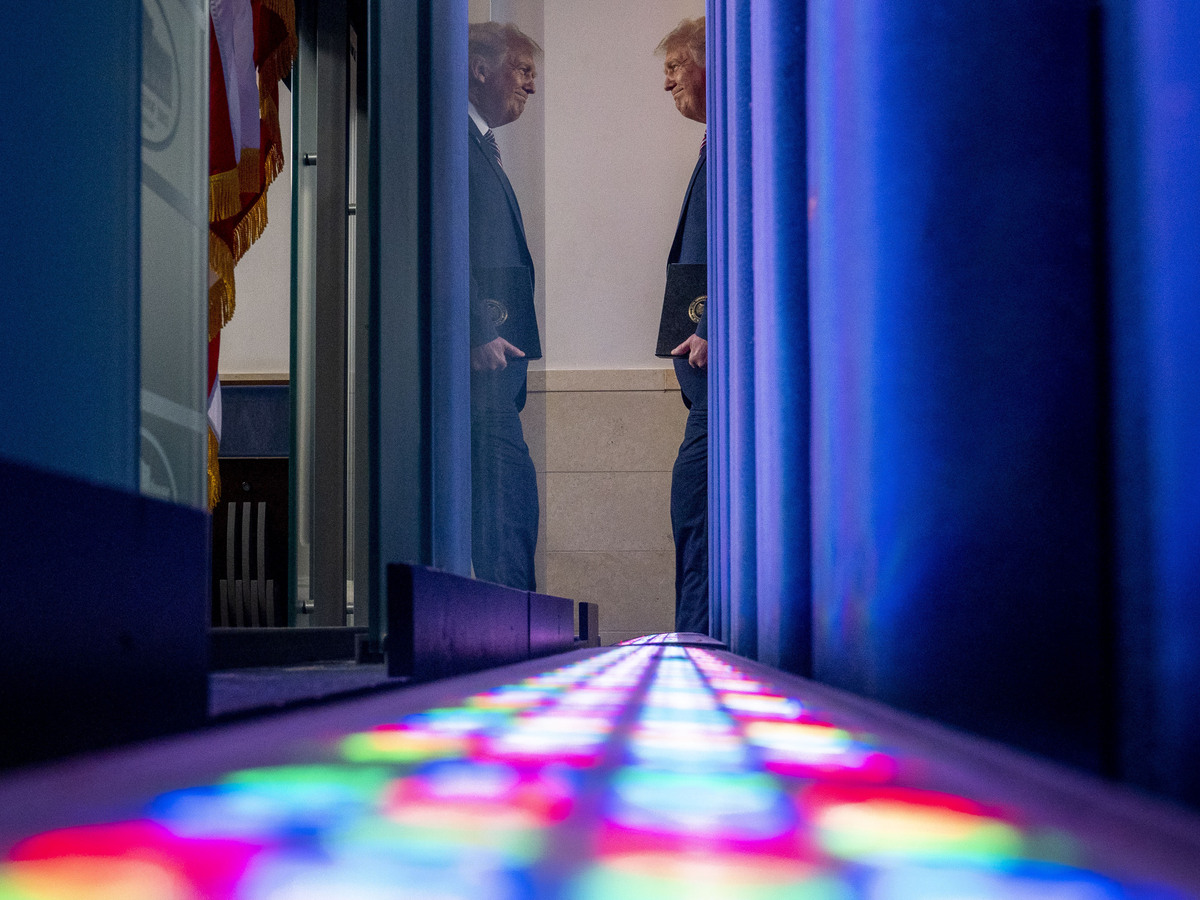 President Trump's tune on coronavirus progress and lockdown success changes depending on which state he is in and which governor he is talking about.

On the first day of the Republican convention in Charlotte, N.C., more than five months after the coronavirus began spreading across the country, President Trump characterized the White House's response as "the exact right thing."

But, following a blueprint he has used for months, he also shifted responsibility for the pandemic response to the states. He accused many governors of having been "ill-prepared" for the pandemic, while praising others for doing a "fine job."

In May, Trump applauded Republican governors in Florida, Georgia, Texas and Arizona for reopening quickly and having low case numbers. At the same time, he criticized states that remained closed, sparring with Democratic governors in New York and California, and pressuring leaders of swing states like Michigan, North Carolina and Pennsylvania to lift restrictions.

In June, Trump held large campaign events that eschewed social distancing requirements and said he planned to hold more rallies in states that were reopening. He fixated on North Carolina and the lockdown measures imposed by its Democratic governor, mostly canceling Republican National Convention events there.

But as summer continued, many of the same states that the president commended saw spikes in coronavirus cases. States he had criticized saw cases decline. So he was forced to change course.

After rates of COVID-19 increased in many Republican-run states, Trump highlighted eventual, small drops in infections, often ignoring the state's summer spike. He eased up on criticisms of Democratic-led states like Pennsylvania and North Carolina — states that avoided significant rises in infections this summer. But in the lead-up to the Republican National Convention, the president took some renewed swings at these leaders.

Nationally, 37% of Americans think Trump would do a better job handling the coronavirus than his Democratic opponent Joe Biden, according to a recent NPR/PBS NewsHour/Marist poll, while 53% favor Biden.

Trump maintains that he still has deep support, but polls have shown Biden with a continuous lead spanning months. Though polls will change, NPR's most recent electoral map ratings favor the former vice president. NPR has classified Pennsylvania, Michigan and Florida as Democratic-leaning races; Georgia, North Carolina and Arizona as toss-ups; and Texas as Republican-leaning.

Here's a look at what Trump has said about the pandemic response in seven key battleground states:

Trump won Florida by just over a percentage point in 2016 and winning the state again may be key for his reelection. DeSantis has remained a top ally to Trump, with the president singing his praises throughout the pandemic.

In April and May, Trump spoke often of Florida's successful fight with the coronavirus — a message that was solidified in early June, when he moved the majority of the Republican convention to Florida. But when the state's infection rate spiked in July, Trump stopped emphasizing its early successes and largely refrained from addressing the surge.

Trump formally canceled the convention events in Jacksonville on July 23. As the state's case numbers have declined from peaks, he has since shifted to praising the state.

While state polling averages indicated that Biden and Trump were virtually tied in March, the former vice president has since shot ahead and established a widening lead. Biden's biggest polling lead against Trump lasted from mid-June through July when the state experienced its highest case counts.

Biden has steadily led in Arizona's polls since mid-March, but Trump has been no stranger to the state, making multiple visits since the start of the pandemic. Trump held his second June rally in Phoenix, despite rising cases. Just four days after that event, his messaging began to change. Vice President Pence postponed campaign visits to both Florida and Arizona "out of an abundance of caution," according to the Trump campaign. By late July — Trump pivoted again, like he did with Florida, and has continued to back Ducey.

With a competitive Senate race underway on top of the presidential election, Arizona may end up being a tough state for Republicans to hold on to this fall.

In late April, Georgia became the first state to begin reopening. Trump initially voiced his opposition to Kemp's decision with the caveat that Kemp should "do what is right," for Georgians. By mid-May, the president was promoting the state's low case numbers. Trump continued to praise the reopening measures in Georgia throughout July despite COVID-19 cases rising since the end of June. On July 15, during a presidential visit to the state, Trump told a local Atlanta TV station that Georgia is "getting close to having 100% open," adding that the state has "really kept the virus to level down." In August, he began acknowledging an increase.

Georgia has gone red for the last six presidential elections, but polling between Trump and Biden has remained close throughout the months of the pandemic, with the two candidates virtually tied since May. Similar to Arizona, Georgia is also home to a slew of competitive congressional races this fall.

Like many Southern states, Texas saw a later rise in cases. The state is also traditionally Republican, but notably, since midsummer, Biden's polling in the Lone Star State has also gotten closer to Trump's. According to state polling averages, Biden is within single digits of the president in a state that hasn't swung blue in a presidential year since 1976.

Trump promoted Texas at first. When cases started rising, he shifted, attributing the rise to specific groups within the state's population and touting the White House response. On June 15, he highlighted the rise in cases within prisons as a reason for increased case counts. On July 27, Trump spoke about "focusing aggressively on the Texas border," citing high infection rates in Latin America. In early August, he linked decreasing cases in the state to lower numbers in counties on the Southwestern border with Mexico.

Trump made no secret of his disapproval of North Carolina's Democratic governor, Roy Cooper, and his more cautious reopening strategy. In a pre-pandemic world, Charlotte was set to host a full Republican convention. But Trump and the RNC sparred with state officials about measures needed to avoid spreading the virus.

Throughout the back-and-forth over where to hold the convention — first in Charlotte and then Jacksonville — to the eventual acceptance of a scaled-down convention in Charlotte, the president's rhetoric has centered on empowering voters while blaming Cooper.

While visiting North Carolina days after canceling the Jacksonville convention, Trump was asked whether Cooper had "made the right choice" in scaling down the convention, to which he replied, "We could've done it many different ways, but I think we did the right thing."

Since mid-May, according to an average of state polls, Biden has held a slim lead over Trump, first surpassing him in mid-April.

Trump's 2016 win in Michigan caused an upset for Democrats, and the state remains in play for both parties going into November. What's more, Biden has consistently led in the state polls for months.

Throughout the pandemic, Trump attacked Gov. Gretchen Whitmer's lockdown measures and voiced support for protests against the rules in place. Whitmer was one of the first governors to bear the brunt of Trump's opposition during the pandemic. But since May, Michigan's coronavirus case numbers have decreased significantly and the state has entered Phase 4 of its reopening plan.

At a "tele-rally" for Michigan in mid-July, the president seemed to acknowledge the need to work with Whitmer, while still maintaining his opposition. "We disagree with many of the things she's doing, but we will continue to work with her," Trump said. "We're also working quite honestly around her and we have to do that because what she wants to do is not going to be good for the state."

Pennsylvania voted for Trump by less than one 1 percentage point, turning the state red for the first time in over two decades. Currently, the state is trending Democrat as Biden has led in an average of polls since March, hitting 50% or higher toward the end of the summer. Unlike other battleground and swing states in play this November, Biden has been able to visit Pennsylvania during the pandemic.

Trump has directed criticism toward Pennsylvania's Democratic governor, Tom Wolf. On a visit to the state in May, Trump spoke directly to the crowd saying, "We have to get your governor of Pennsylvania to start opening up a little bit." The state has seen lower case numbers since April.

Though Trump has made fewer mentions of Wolf in recent months, he took aim at the governor on a recent trip to Old Forge, Pa., close to where Biden was born.

And Trump directed a similar message to Biden, alleging that Democrats are imposing lockdown measures for political gain.

"Everything that we've gained over the last number of months, [Biden] wants to lock it down," Trump said. "These places have to be opened up. But Nov. 4, they'll open. Don't worry." he added.