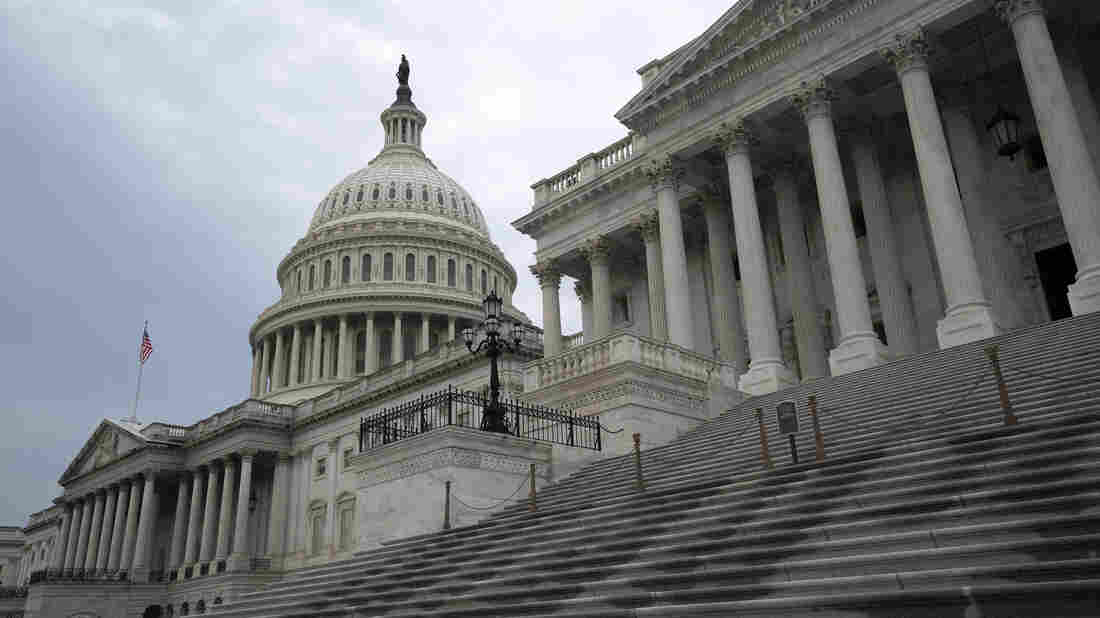 The U.S. Chamber of Commerce did not incorporate its climate commitments into its annual report card on how members of Congress voted, according to an analysis from an environmental think tank. Stefani Reynolds/Getty Images hide caption

The U.S. Chamber of Commerce has publicly called for businesses, individuals and governments to work together to fight climate change.

But a new analysis from the World Resources Institute, an environmental think tank, found that the Chamber didn't reflect that goal in its annual scorecard evaluating U.S. lawmakers' voting records.

The Chamber of Commerce has endorsed legislation on energy efficiency, battery research, lower-emissions industrial technology, cleaner power plants and nuclear energy — but its 2019 scorecard didn't actually reward members of Congress who supported those bills. Only one climate-friendly bill, calling for research into processes for capturing carbon that has already been released into the environment, was incorporated into the scorecard.

"We understand that the Chamber's scorecard is designed to encompass the association's many interests," the World Resources Institute writes, "but the omission of positive votes on climate action and absence of any apparent attempt to integrate climate change into the scorecard raises questions about the credibility of the Chamber's commitments."

The institute noted that many of the climate deniers in Congress — lawmakers who deny that humans are causing climate change — rated very highly in the Chamber of Commerce's evaluation.

"This is not picking at a scorecard for a technical reason," says Kevin Moss, the director of the institute's Sustainable Business Center. "[The Chamber of Commerce is] the biggest trade association in the world and, by many people's reckoning, one of the most influential, if not the most influential. So what they do and how they use that influence is of critical importance to climate."

Marty Durbin, the president of the U.S. Chamber of Commerce's Global Energy Institute, told NPR the scorecard is designed to reflect many different business priorities and does not include every bill that the Chamber endorses.

"It is not manageable when you're trying to reflect the interests of the broad business community across all the areas — not just in climate, energy, environment, sustainability, but labor and employment, national security," he said. Durbin said he welcomed the World Resources Institute's comments and expects next year's scorecard to include more bills related to climate.

As for the climate deniers in Congress, he said, "we have not yet taken the step of saying that there is one particular issue that if you don't [support], then we cannot [endorse]."

A growing number of large companies are pledging to reduce their emissions as the world increasingly recognizes the dire threat of climate change. Some companies also say they will lobby governments for climate-friendly policies, recognizing the limits of voluntary action — and the potential benefits of shaping climate policy that protects their business interests.