Accessibility links
Hurricane Laura Is Forecast To Hit U.S. Gulf Coast As Category 4 Hurricane The storm is expected to have winds of at least 130 mph — a Category 4 storm — when it makes landfall near the Louisiana-Texas border. Its storm surge could be up to 14 feet. 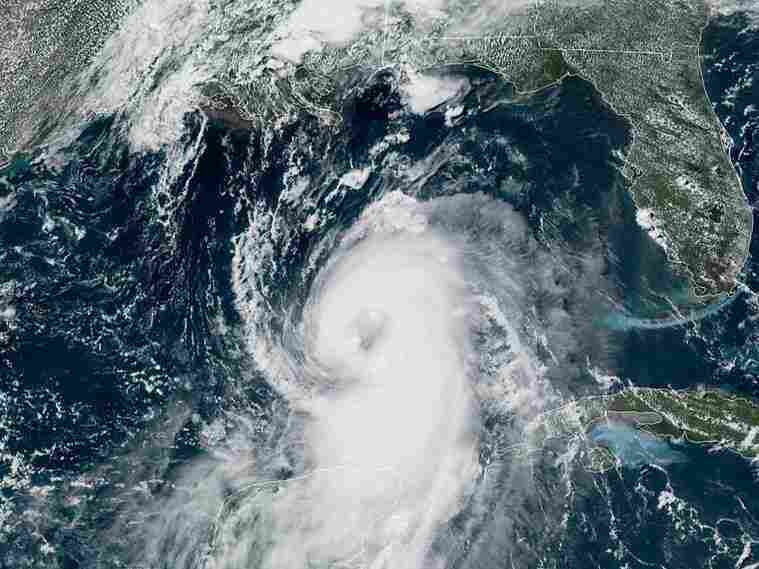 Hurricane Laura formed early Tuesday morning and has shown signs of becoming better organized as it crosses the Gulf of Mexico. Laura is forecast to make landfall along the Gulf Coast as a Category 4 storm. NOAA/NESDIS/STAR GOES-East hide caption 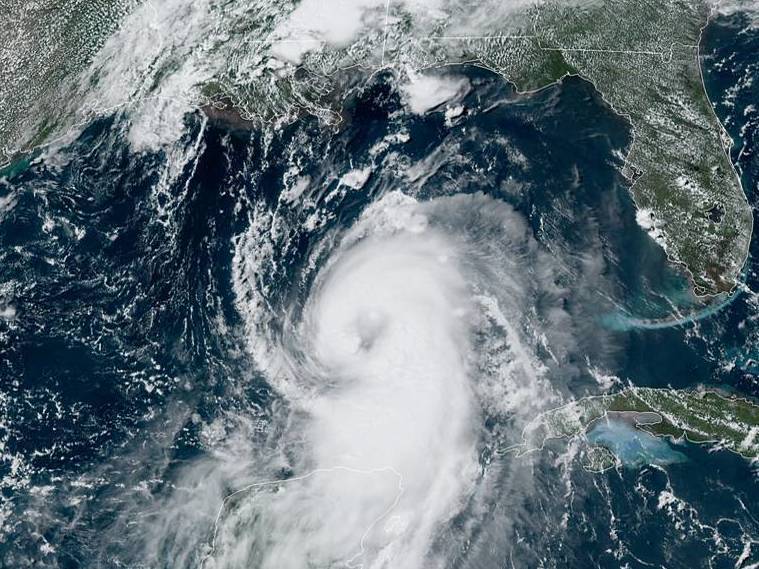 Hurricane Laura formed early Tuesday morning and has shown signs of becoming better organized as it crosses the Gulf of Mexico. Laura is forecast to make landfall along the Gulf Coast as a Category 4 storm.

Hurricane Laura is "rapidly intensifying" and will make landfall late Wednesday or early Thursday as a major hurricane, according to the National Hurricane Center.

As of Wednesday morning, Laura is a Category 3 storm with maximum sustained winds of at least 115 mph. Forecasters predict a storm surge from 9 to 14 feet when it strikes near the Louisiana-Texas border.

Laura was declared a hurricane Tuesday morning, when a NOAA hurricane hunter aircraft detected maximum sustained winds of 75 mph as the storm's center was crossing into the Gulf of Mexico. It's expected to draw more power from the Gulf's warm waters.

"Significant strengthening is forecast during the next 48 hours," NHC forecaster Eric Blake said in his advisory.

Laura is expected to become a Category 4 storm, which brings "catastrophic damage" to homes, trees and infrastructure, according to the National Weather Service. 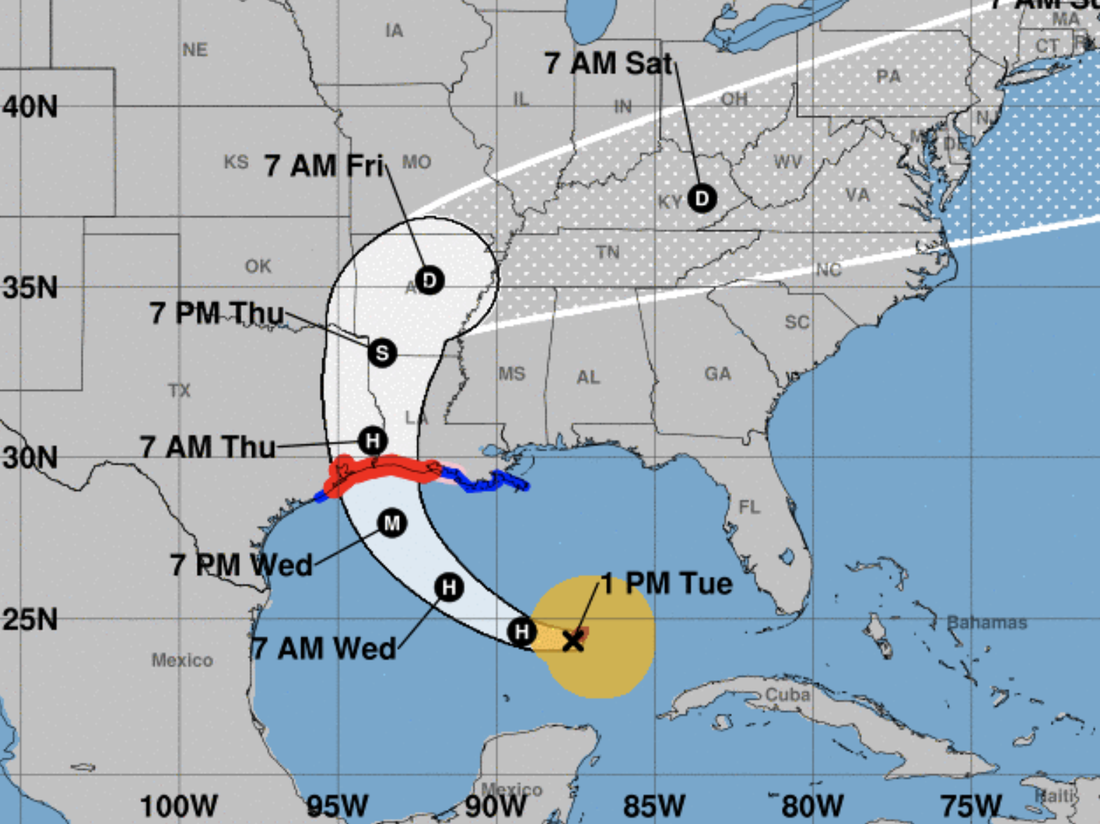 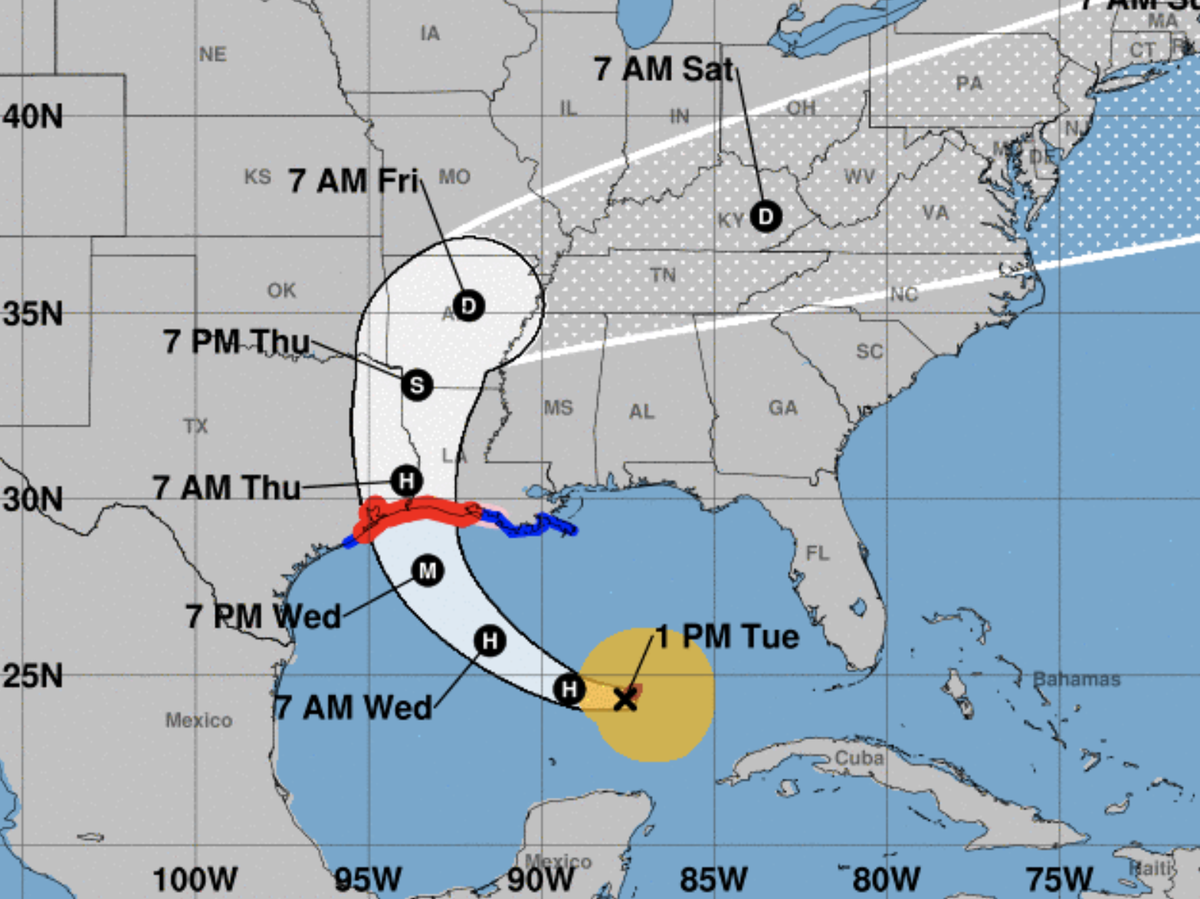 Hurricane Laura is predicted to make landfall near the Texas-Louisiana border — but forecasters say its rainfall and storm surge will likely affect a very large area.

A hurricane warning is now in effect from San Luis Pass, Texas — just south of Galveston — to Intracoastal City, La., meaning hurricane conditions are expected somewhere within the warning area, likely within 36 hours.

The weather agency issued a storm surge warning for an even wider area, from Freeport, Texas, to San Luis Pass near Galveston Island; the mouth of the Mississippi River to Ocean Springs, Miss.; and Lake Pontchartrain, Lake Maurepas and Lake Borgne, La. The storm surge warning means there's a possibility that rising water could cause life-threatening conditions in the area within the next 48 hours.

"Historically, the storm surge is the leading cause of fatalities in these tropical systems," Graham said.

"You have to get ready today," Graham told residents via Facebook Tuesday, in a late-morning update. 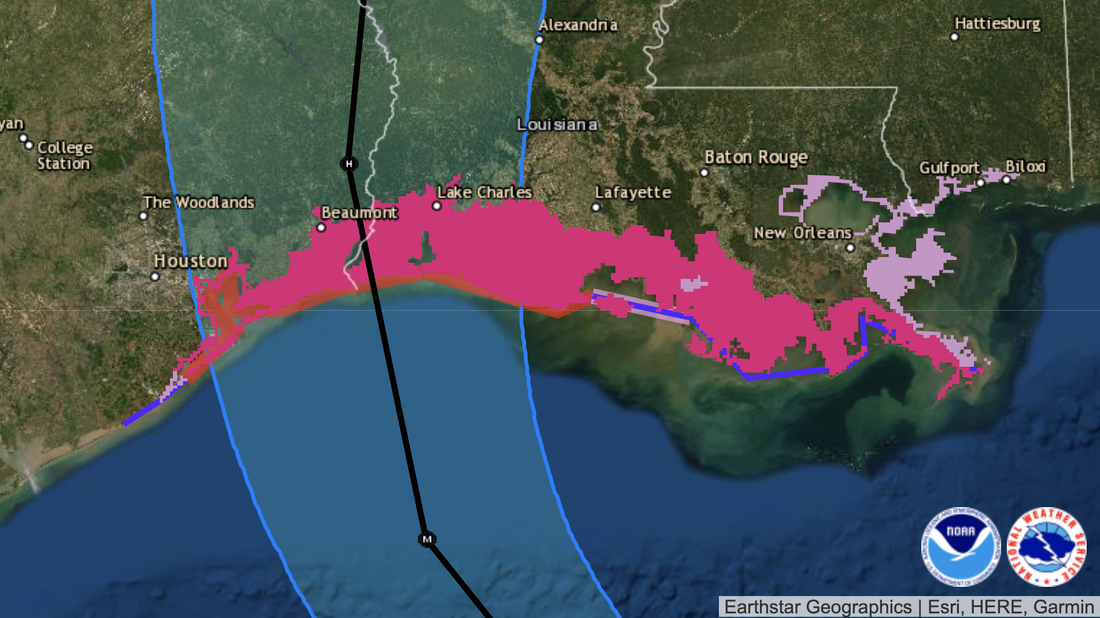 If the surge peaks at the same time as high tide, areas such as Sea Rim State Park in Texas, Calcasieu Lake in Louisiana and Sabine Lake on the border could see water that is 9 to 14 feet deep, the hurricane center says.

Laura entered the Gulf on Tuesday, moving west-northwest, and forecasters say its long westward trip across the water will give it time to strengthen.

When the storm arrives, experts warn, the affected area could be much larger than the cones that appear on forecast maps: Laura is projecting tropical storm-force winds for 175 miles from its center, and it will bring huge amounts of rain to inland areas.

People in the storm's path, some of whom have already seen heavy rain from Tropical Storm Marco, are preparing for Laura's arrival. To the relief of many people along the Gulf shore, Marco fizzled out as it reached Louisiana's coastline. But that storm, which spent less than a day as a hurricane, was far smaller and less powerful than Laura.

The Texas town of Port Arthur — home to the largest oil refinery in North America — is currently in the middle of Laura's projected path. Its home county, Jefferson, enacted a mandatory evacuation order on Tuesday, with exemptions for essential workers at the refinery and elsewhere.

"Please take extra precautions to pack up your home and family and finalize your plans," the Jefferson County Sheriff's Office told residents.

The most named storms to make landfall in the continental US (CONUS) by the end of August on record is 6 (set in 1886 and 1916). The CONUS has already had 6 landfalls in 2020: Bertha, Cristobal, Fay, Hanna, Isaias and Marco. #Hurricane #Laura poised to make landfall in <2 days. pic.twitter.com/fnX7IWKEkb

Mandatory evacuations have also been ordered for Galveston and Orange County. Other areas, such as Nassau Bay and Chambers County, are under voluntary evacuation orders.

The governors of Texas and Louisiana have declared states of emergencies because of the looming storm; both also say their requests for President Trump to grant a federal emergency declaration have been approved.

Texas Gov. Greg Abbott has also ordered "more than 70 members with the Texas Army, Air National Guards, and Texas State Guard" to position themselves in areas where they can respond to emergencies when needed. The order also puts UH-60 Black Hawk and UH-72 Lakota helicopter crews on alert.

As they contend with the storm, emergency agencies and evacuation facilities will be restricted by capacity limits and other concerns brought about by the COVID-19 pandemic. Both Texas and Louisiana have had large outbreaks of the viral disease.

"The virus is not concerned that we have hurricanes coming," Louisiana Gov. John Bel Edwards said earlier this week. "So it's not going to take any time off, and neither can we."

"We always tell you that the first 72 hours are on you," Edwards said, urging people to prepare for a possible severe impact from the storm – and to expect a delay in getting help.

"You should be prepared to shelter in place, yourself and your family, for at least that long," the governor added. The use of large shelters, he said, would be a last resort.

All Louisiana state government offices will be closed on Wednesday and Thursday, Edwards announced Tuesday.

Laura is predicted to remain a tropical storm for at least a day after making landfall, bringing intense rainfall of from 4 to 8 inches. Some isolated areas will see as much as 12 inches.

"The threat of widespread flash and urban flooding, along with small streams overflowing their banks, will be increasing Wednesday night into Thursday from far eastern Texas, across Louisiana, and Arkansas," the NHC says.

Over the weekend, Laura's remnants are predicted to spread rains into the middle-Mississippi, lower Ohio and Tennessee valleys.