Accessibility links
Belarus' Lukashenko Looks To Russia For Help Amid Biggest Challenge To His Power Earlier this year, Alexander Lukashenko had tried to offset Kremlin pressure by pursuing rapprochement with Western nations. Now he is directing attacks toward the West and has turned to Russia again. 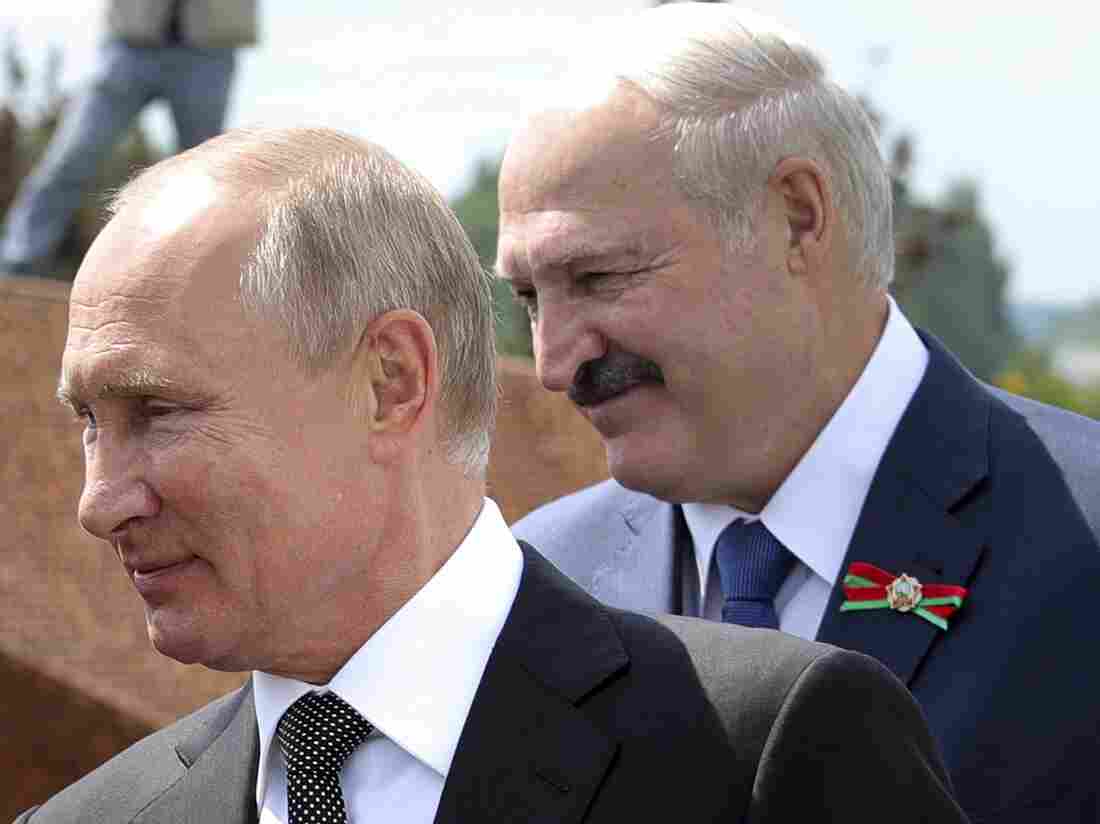 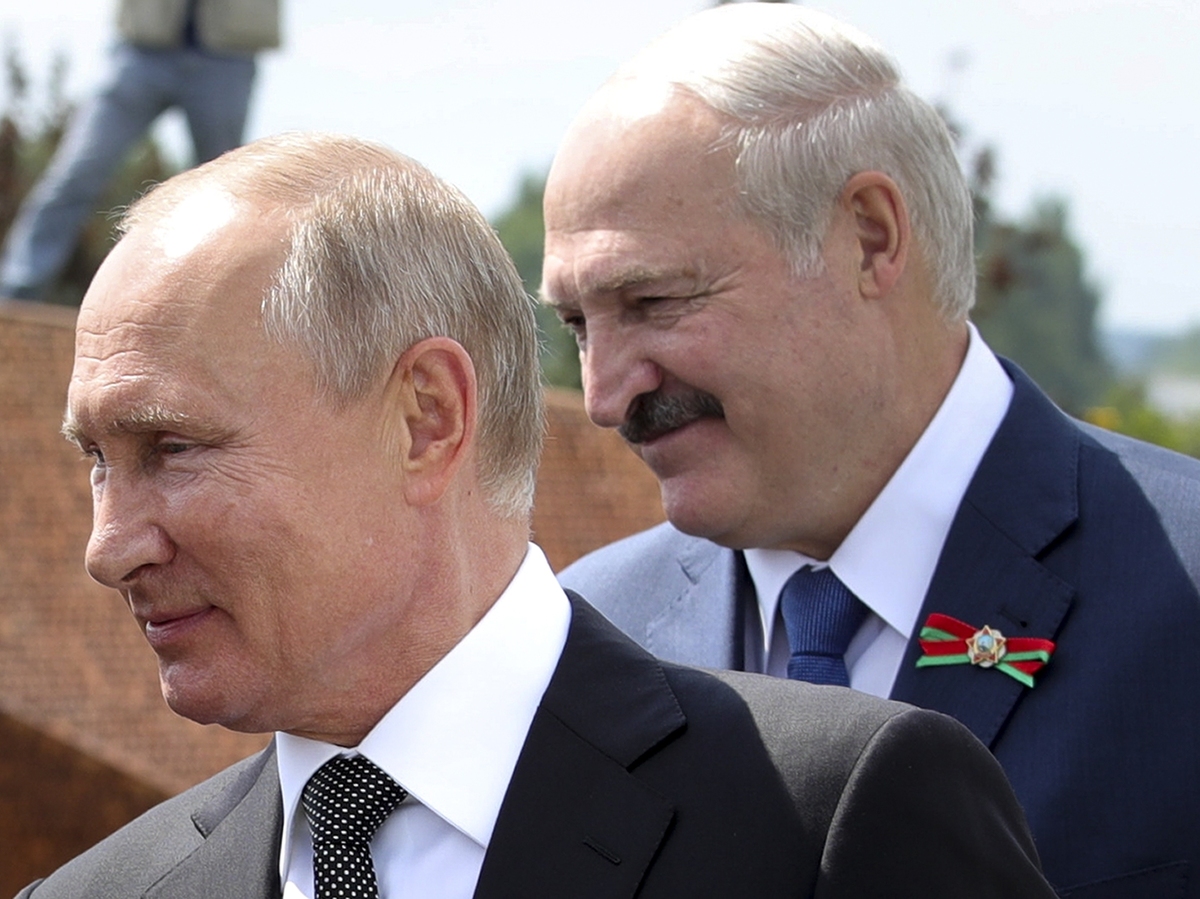 As he faces the biggest domestic challenge to his 26-year rule, Belarusian President Alexander Lukashenko is looking for external enemies to blame — and foreign friends who can help.

Huge nationwide protests demanding his resignation have continued after Lukashenko claimed to have won a landslide in a presidential election on Aug. 9. On Saturday, after warning that NATO was planning an invasion to help anti-government demonstrators remove him from power, Lukashenko donned a camouflage uniform and inspected troops on Belarus' border with Poland.

"The fatherland is in danger. We can't joke about it, especially since NATO troops aren't weak," he said a day earlier. "That's why I've warned the president of Russia about the situation unfolding in Belarus."

NATO denies there is any buildup in Poland, Lithuania and Latvia, its three member states that border Belarus. But Lukashenko's efforts were not so much to forestall a real attack as to spin a narrative of a beleaguered underdog facing hostile forces that only Russian President Vladimir Putin has the power to stop.

Just weeks earlier, Lukashenko was insinuating that his domestic foes were controlled by Russia.

Now, "the current situation is more or less developing according to the Kremlin's script, and the course of events basically meets its interests," Russian political commentator Maxim Yusin said on Moscow's Kommersant FM radio station.

A violent regime change can be practically ruled out, as Belarusian security forces have remained loyal to Lukashenko, the protesters are peaceful and the opposition leadership is indecisive, Yusin said.

In the run-up to this month's presidential election, Lukashenko alluded to Russia as a nebulous adversary after his security forces arrested 33 Russian nationals he claimed were planning to stoke unrest. Although Russia is officially Belarus' closest ally, Lukashenko had been trying to offset Kremlin pressure for closer integration by pursuing a rapprochement with Western countries — including a planned exchange of ambassadors with the United States later this year. The U.S. hasn't had an ambassador in Belarus since 2008.

After the election, mass protests broke out against electoral fraud when an official exit poll gave Lukashenko 80% of the vote, with opposition candidate Svetlana Tikhanovskaya trailing in a distant second place. Belarusian security forces imprisoned almost 7,000 people. As detainees were released, their reports of vicious beatings and torture fueled new demonstrations.

Tikhanovskaya, whose husband is in jail, was forced to leave Belarus for neighboring Lithuania. She has called for foreign mediation between the opposition and Lukashenko's regime to ease a transfer of power. Tikhanovskaya's campaign platform centered on releasing all political prisoners and holding new, free and fair presidential elections within half a year.

Lukashenko has ignored her calls for dialogue and directed his attacks toward the West.

Before a European Union summit on Belarus last week, German Chancellor Angela Merkel and French President Emmanuel Macron both consulted with Putin, who warned that "outside interference" in Belarus's domestic affairs was "unacceptable" to Russia.

After the summit, Merkel said that Lukashenko had refused all her requests for a phone call. The EU leaders said they wouldn't recognize Lukashenko's reelection and agreed to impose sanctions on those responsible for vote rigging and violence against protesters.

Belarus, unlike its neighbor Ukraine, has never declared an intention to join the EU or NATO, and its mostly Russian-speaking population tends to be positively inclined toward Russia. Belarus and Russia are in a loose union that Putin has been trying to tighten. The two countries also have a common defense pact, and the Kremlin has said it would provide military assistance to Lukashenko, if necessary.

"Russia's goal is to keep Belarus within its traditional sphere of influence. Until now, Lukashenko has played the role of the main 'guarantor,'" Tatiana Stanovaya, head of the R.Politik consultancy, said in a post on the Telegram app. "A closer union between the two countries would reduce dependence on this personal factor, meaning that regardless of how the political situation develops, the Kremlin expects integration will guarantee a pro-Russian Belarus."

The Kremlin is demanding that Lukashenko, 65, weather the current political storm so that he can speed along integration with Russia and find a successor who would be amenable to the Kremlin, according to Stanovaya.

"For Moscow, the option whereby Lukashenko unconditionally resigns and Belarus holds elections without the proper preparation would be extremely dangerous from a geopolitical standpoint. In other words, this could lead directly to 'losing' Belarus," Stanovaya wrote.

While Tikhanovskaya did not run on an explicitly pro-Western platform, the Kremlin's continuing support for Lukashenko is making the Belarusian opposition more skeptical of Russia.

Dmitry Peskov, Putin's spokesman, has refused to comment on the behavior of Lukashenko's security forces, saying it's Belarus' "internal affair." Similarly, Peskov has said the Kremlin has no contacts with Lukashenko's opponents, as doing so would constitute foreign interference, and the Belarusian opposition doesn't seem particularly interested in cooperating with Russia in the first place.

Tikhanovskaya, for her part, says she has been contacted by the governments of Canada, the United States, Britain, Germany, Poland and others, but not by the Kremlin.

Deputy Secretary of State Stephen Biegun met with Tikhanovskaya on Monday during a visit to the Lithuanian capital Vilnius and repeated that message, condemning the violence against peaceful protesters and saying the Belarusian people should determine their own future.

On Tuesday, he flew to Moscow for a meeting at the Russian Foreign Ministry.

After meeting Biegun, Foreign Minister Sergei Lavrov appeared on Russian state television, where he echoed Lukashenko's warnings of foreign intervention and claimed that forces in Poland and Lithuania are trying to provoke violent clashes in Belarus.

In other words, Russia still reserves the right to come to Lukashenko's rescue.