Accessibility links
'Free At Last,' Says Jerry Falwell Jr. After Resigning As Head Of Liberty University In an interview with NPR's Sarah McCammon, Falwell expresses relief — and maintains that he has "not broken any rules" that apply to staff members at the university. 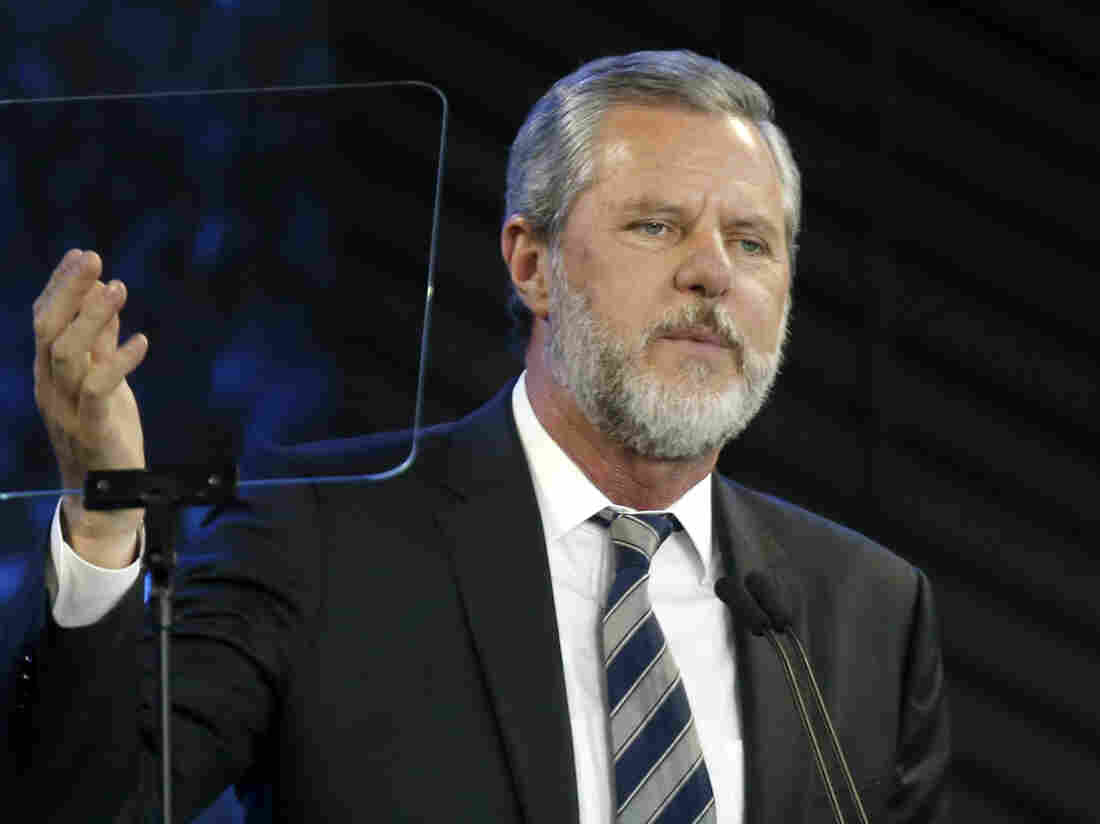 Jerry Falwell Jr. has told NPR that he has accomplished all he had hoped to do at Liberty University. Steve Helber/AP hide caption 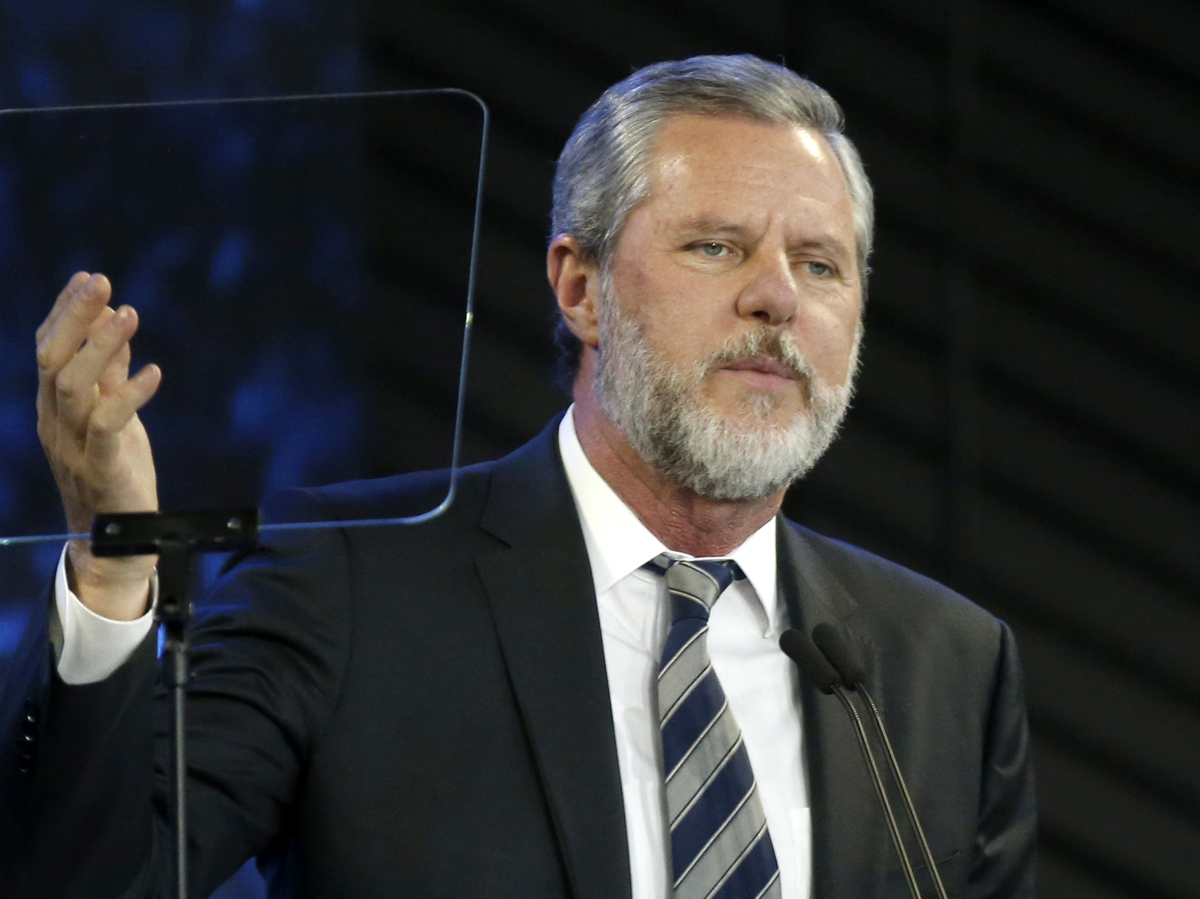 Jerry Falwell Jr. has told NPR that he has accomplished all he had hoped to do at Liberty University.

Liberty University President Jerry Falwell Jr. confirmed Tuesday that he is resigning from his post following allegations of sexual behavior that flouted the school's honor code.

Appropriating Martin Luther King Jr.'s final words from his iconic "I Have A Dream" speech, Falwell told NPR that he is stepping down from his role at the university in Lynchburg, Va., saying he is "free at last, free at last. Thank God almighty, I am free at last!"

He also insisted that despite the scandal, he has accomplished all he had hoped to do at the school.

"I'm leaving because I think I've done all I can do. It's better to leave at the top," Falwell declared.

His departure also spares further embarrassment for university officials, he said, noting that "I have not broken any rules — any rules — that apply to a staff member at Liberty."

The Liberty University board of trustees said it approved Falwell's resignation as president, chancellor and member of the board of directors on Tuesday morning after Falwell sent his letter of resignation through his attorney late Monday night.

"The Board, composed of a mix of alumni, pastors and business executives, active and retired, used most of its meeting to focus forward on the university's future and steps that could be taken to ensure it remained true to its mission," the university said in a statement. "The Board set its next meeting in Lynchburg to select a search committee for its new President."

The announcement comes after a confusing 24 hours in which Falwell denied reports that he was resigning.

Liberty University Doubles Down After Falwell Denies Reports Of His Resignation

The controversy began Monday when a Liberty official told several news outlets, including NPR, that Falwell had resigned. Falwell later contradicted those reports in interviews with Virginia Business and Politico.

Later, the university released a statement that said Falwell had agreed to resign earlier Monday but then backtracked. At that time, Falwell told NPR via text message that things were "still up in the air."

Falwell, a leading evangelical ally of President Trump's, steps down from Liberty after Reuters reported Monday that his former business partner, Giancarlo Granda, claimed he was engaged in a long-term relationship with Falwell and his wife, Becki, in which Granda engaged in sexual acts with the wife while Falwell looked on.

The day before the report was published, Falwell told the Washington Examiner that the relationship, which he described as his wife's affair, was a "fatal attraction" situation in which a former family friend tried to extort the Falwells for money. Falwell told NPR that his focus on Liberty after taking over as president in 2007 likely led to his wife's indiscretion.

"During that time, I kind of neglected my wife and kids because I was so immersed in Liberty and making sure it was successful, and that's probably what caused Becki's mistake," he said.

In the interview with NPR, Becki Falwell said she felt awful about the situation. "Imagine having to tell your kids that you messed up," she said. "We have great kids and we're blessed that they're forgiving and they love us, and we have a great family."

The university, which was founded by Falwell's late father, the Rev. Jerry Falwell Sr., abides by a strict honor code that states sexual activity is only permitted between one man and one woman within marriage.

Jerry Falwell Jr.'s departure comes after he agreed to take an indefinite leave of absence earlier this month for posting a racy vacation photo on Instagram that showed him with his pants unzipped alongside a woman who is not his wife.

Falwell is no stranger to controversy. In June, he faced scrutiny for tweeting a racist yearbook photo of Virginia Gov. Ralph Northam, a Democrat, wearing blackface. Last year, more than two dozen current and former Liberty University officials described a culture of fear at the institution and questionable business dealings directed by Falwell.

Some Liberty students have also expressed discontent with Falwell's strong vocal support of Trump, which many said is not appropriate for the leader of a conservative evangelical Christian university. Falwell's father was also known for his political activism in support of conservative candidates.

Falwell was the fourth president of Liberty University. He served as general counsel before his father's death in 2007, according to the Liberty University statement. In his time as president, the school said, Falwell significantly boosted the school's public profile, leading more than $1 billion of campus construction projects and increasing enrollment in the university's residential and online programs to more than 100,000 students.