Accessibility links
Yes, Women Could Vote After The 19th Amendment — But Not All Women. Or Men The 19th amendment secured all women the right to vote, but in practice many women of color were excluded. This continues to resonate today with voter suppression among marginalized communities. 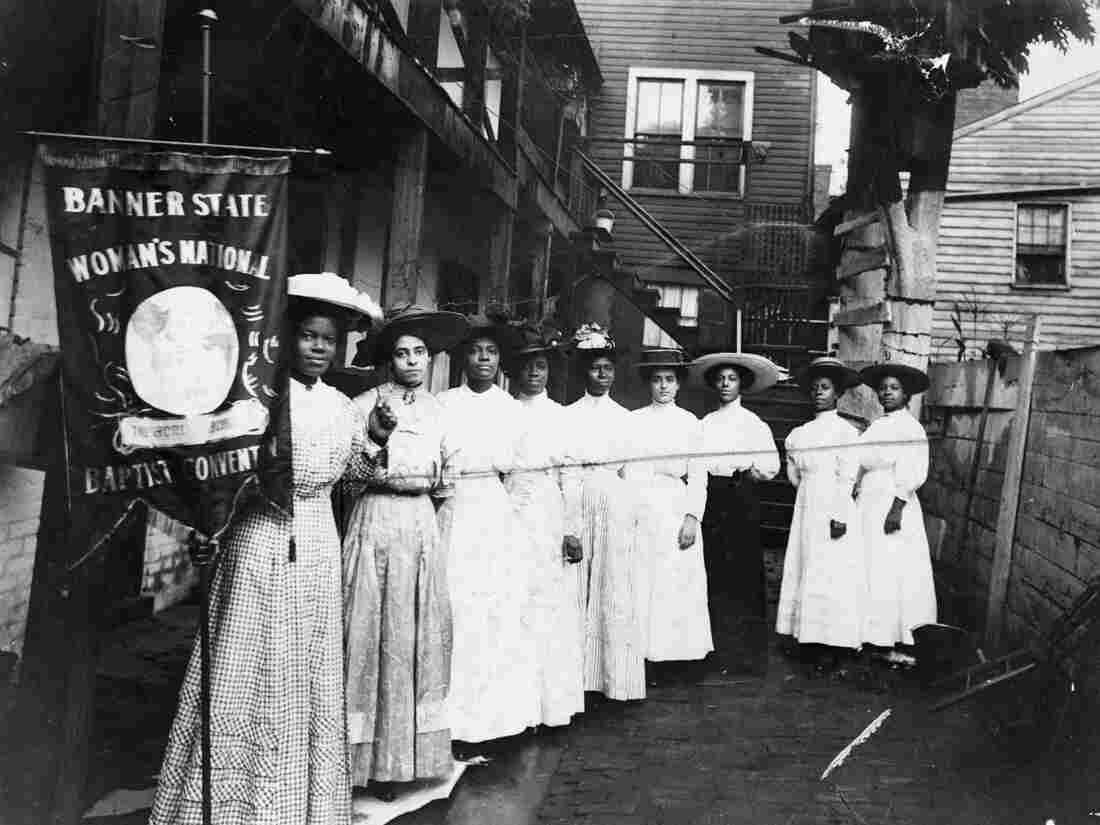 Nannie Helen Burroughs holds a banner reading, "Banner State Woman's National Baptist Convention" as she stands with other African American women, photographed between 1905 and 1915. Burroughs was an educator and activist who advocated for greater civil rights for African Americans and women. Library of Congress hide caption 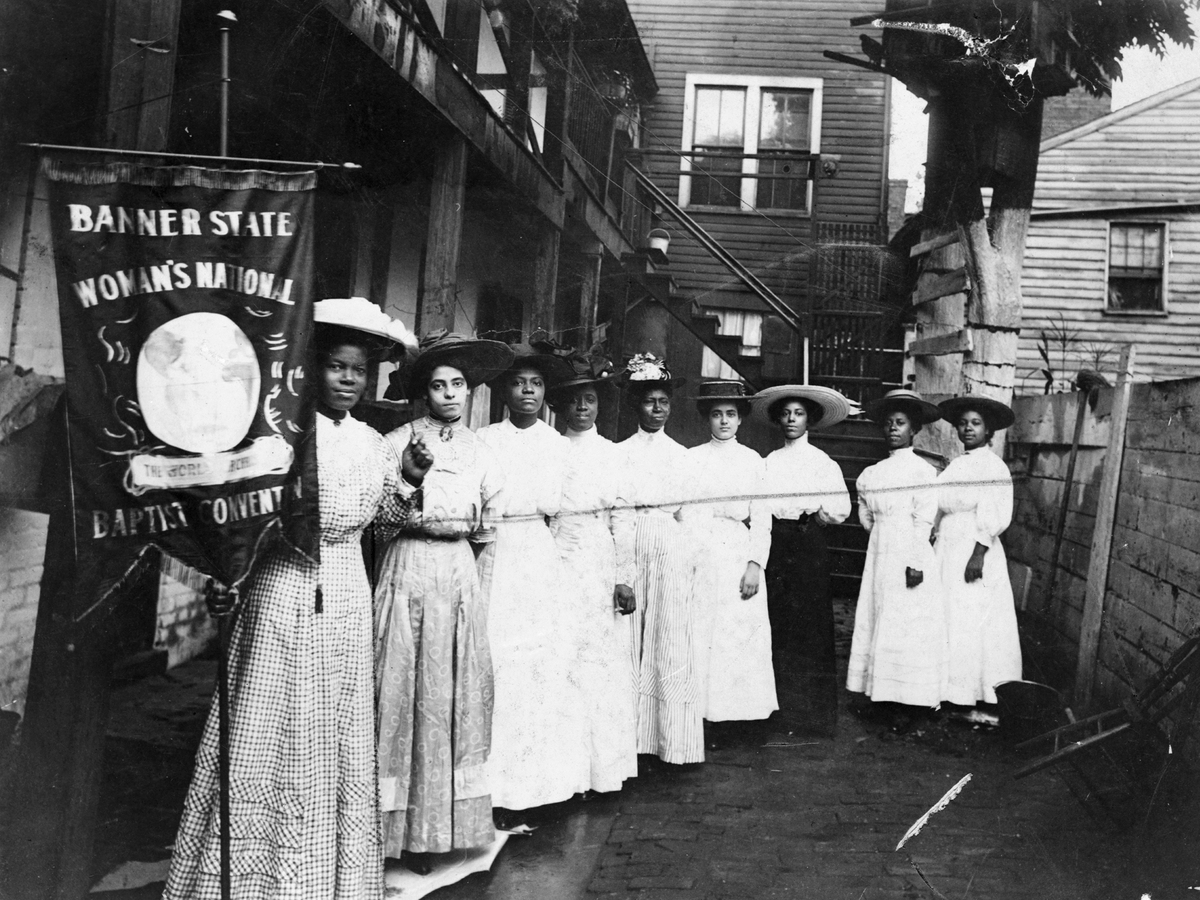 Nannie Helen Burroughs holds a banner reading, "Banner State Woman's National Baptist Convention" as she stands with other African American women, photographed between 1905 and 1915. Burroughs was an educator and activist who advocated for greater civil rights for African Americans and women.

On Aug. 26, 1920, the 19th amendment to the U.S. Constitution officially took effect when Secretary of State Bainbridge Colby signed a proclamation certifying its ratification.

The amendment promised women that their right to vote would "not be denied" on account of sex.

Yet, even after that milestone, millions of people — women and men alike — were still excluded from the vote, as many barriers to suffrage remained.

The fight over the amendment was not just about sex; it was also deeply entwined with race. 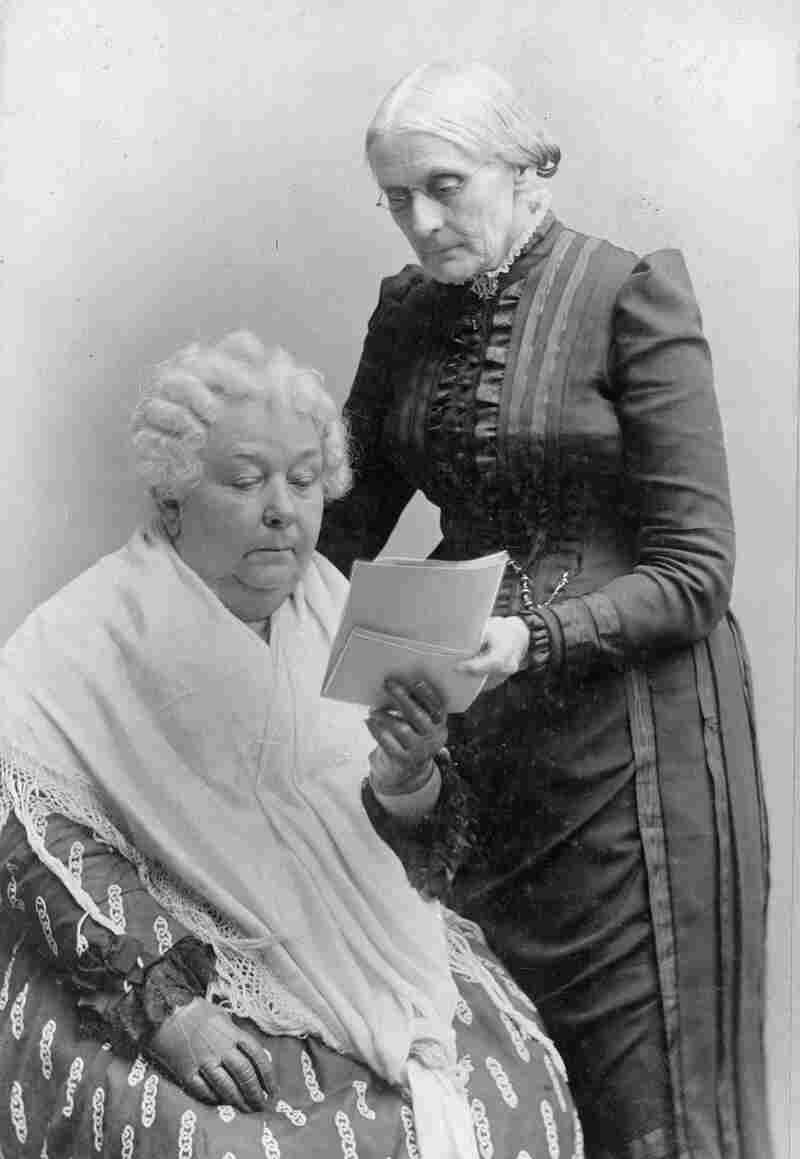 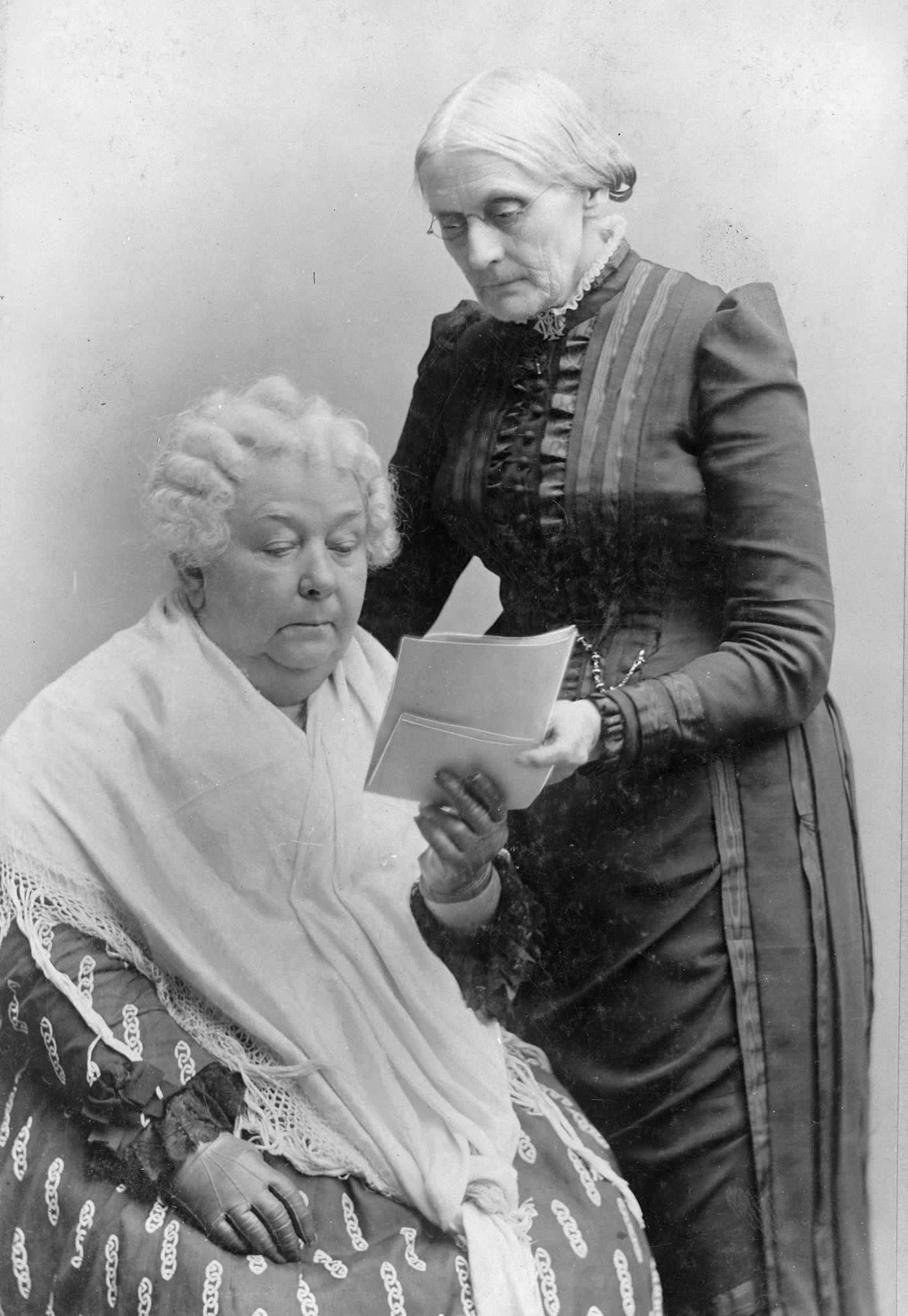 Early suffragist leaders Elizabeth Cady Stanton (left) and Susan B. Anthony later split off from their alliance with abolitionists.

While the women's suffrage movement had its roots in the anti-slavery movement, early suffragist leaders including Elizabeth Cady Stanton and Susan B. Anthony would later split off from their alliance with abolitionists. They were outraged that, under the 15th amendment, Black men would get the vote while white women were still denied.

Decades later, when the 19th amendment was up for debate, Southern politicians especially seethed over the prospect of enfranchising millions of African American women, just as the 15th amendment had enfranchised Black men — by law if not by practice.

"The debates are explicit!" says Martha S. Jones, professor of history at Johns Hopkins University and author of the forthcoming book Vanguard: How Black Women Broke Barriers, Won the Vote, and Insisted on Equality for All.

"Racism runs through the debates over women's suffrage oftentimes through and through," Jones says. "Racism is a language that is shared by suffragists and anti-suffragists alike."

Case in point: In 1919, just before the U.S. Senate voted on the 19th amendment, South Carolina Sen. Ellison Smith fulminated against what he called the "alien and unfit [Negro] race."

He proclaimed it "a crime against white civilization" that Black men were granted the vote with the 15th amendment.

Extending the vote to "the other half of the Negro race," Smith thundered, would unleash new "evils."

In the face of racist opposition, white suffragists betrayed the Black women who had also long fought for the right to vote, says Elaine Weiss, author of The Woman's Hour: The Great Fight to Win the Vote.

"We have to acknowledge," Weiss says, "that [white suffragists] used as one of their politically expedient arguments, 'You know, there are more white women who will be voting than Black women. So don't worry. White supremacy is not going to be endangered.'" 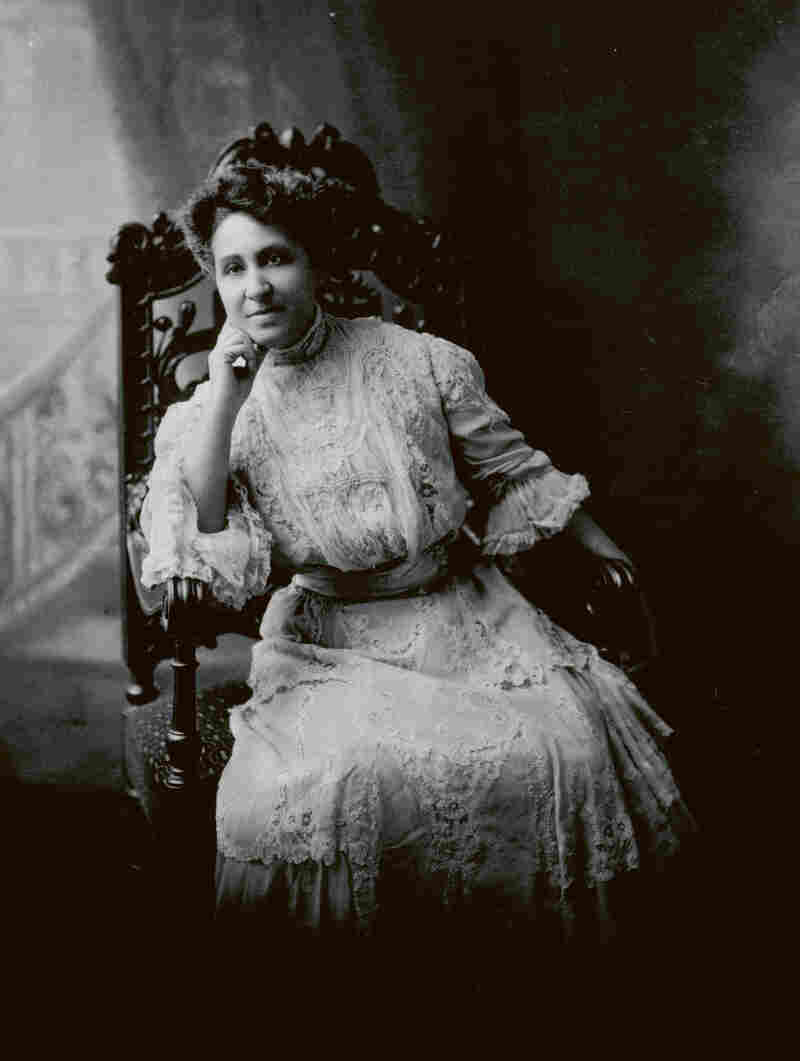 In 1918, leading suffragist Carrie Chapman Catt framed the argument this way in a letter to North Carolina Congressman Edwin Webb, trying to persuade him to vote yes on the 19th amendment:

[The] present condition in the South makes sovereigns of some negro men, while all white women are their subjects. These are sad but solemn truths. If you want white supremacy, why not have it constitutionally, honorably? The Federal Amendment offers the way.

Of course, as historian Martha Jones points out, whites in the Jim Crow South knew all too well how to keep African Americans from voting: Poll taxes. Literacy tests. Grandfather clauses. Violence and lynching.

Indeed, just two months after the 19th amendment was ratified, the prominent African American suffragist and activist Mary Church Terrell wrote a letter to NAACP president Moorfield Storey that was filled with foreboding:

The colored women of the South will be shamefully treated, and will not be alowed [sic] to vote, I am sure. I hope the Republicans will do something toward enforcing the Fifteenth Amendment. We are so helpless without the right of citizenship in that section of the country where we need it most.

Along with African Americans, other groups who continued to be excluded from the vote included Asian American immigrants, who were long ineligible for naturalized citizenship on account of race, and only won the vote starting in 1943. 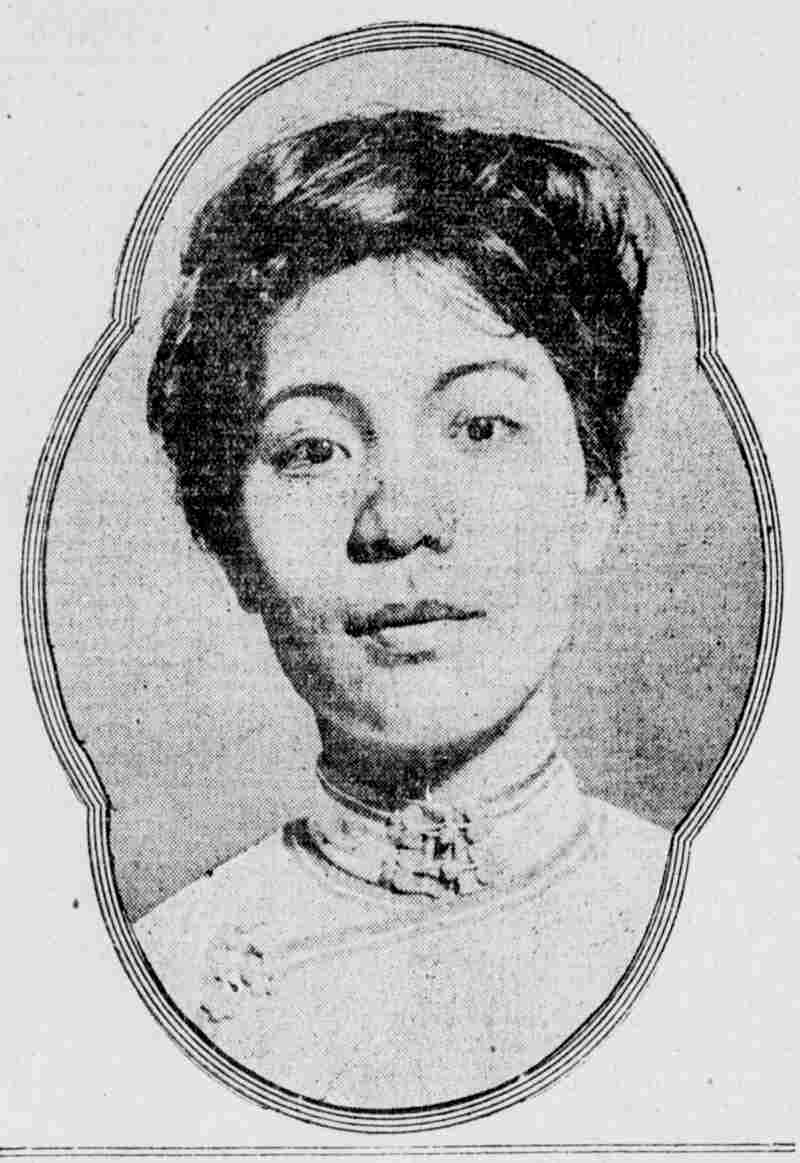 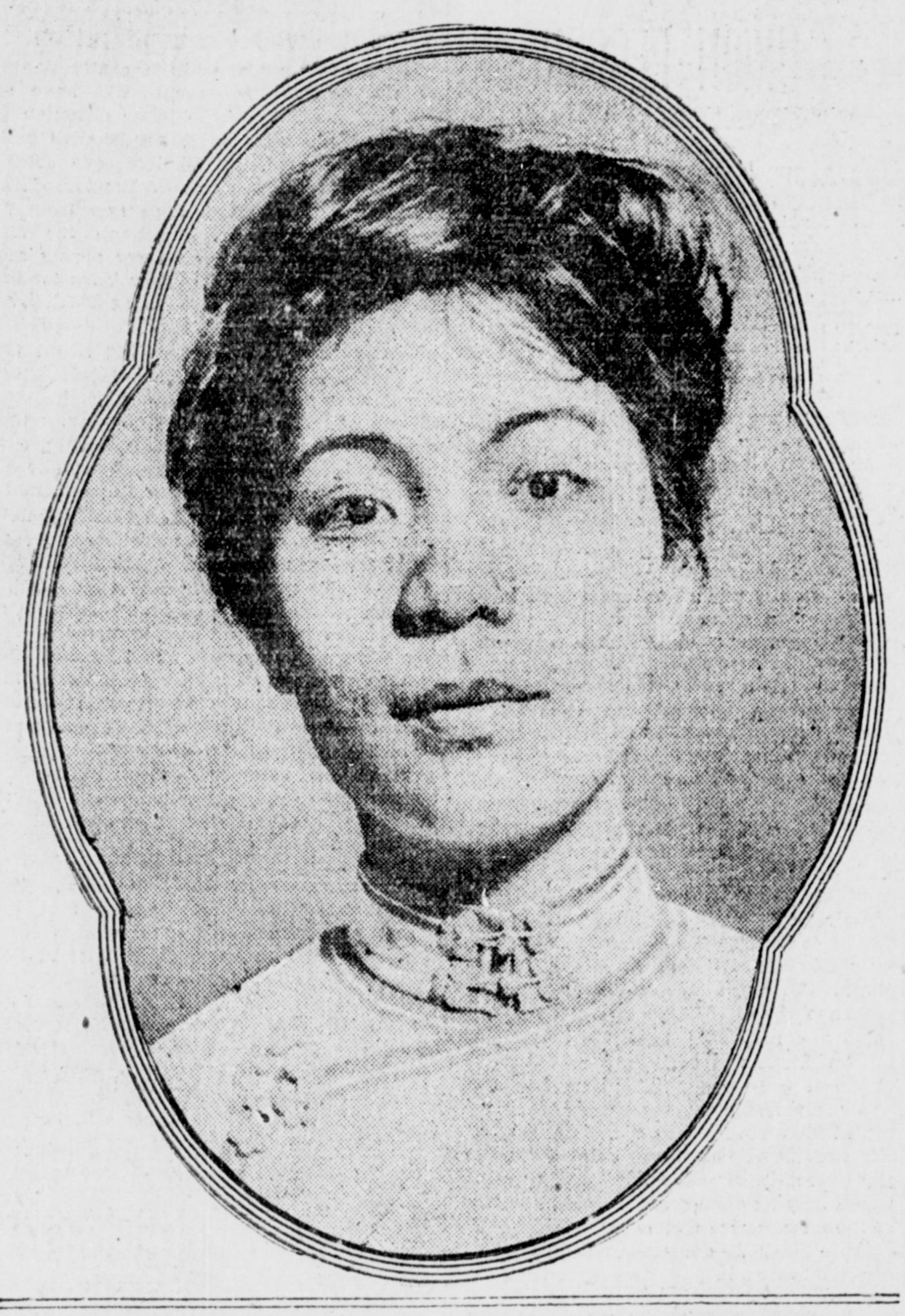 Mabel Ping-Hua Lee became a powerful voice in the suffrage movement starting as a teenager.

Among those advocating for both women's suffrage and immigrant rights was a young woman named Mabel Ping-Hua Lee. She was about 5 when her family managed to immigrate to the U.S. from Canton (now Guangzhou), China, in 1900 through a narrow exemption in the Chinese Exclusion Act.

Starting as a teenager, Lee became a powerful voice in the suffrage movement, says Cathleen Cahill, associate professor of history at Pennsylvania State University, and author of the forthcoming book, Recasting the Vote: How Women of Color Transformed the Suffrage Movement.

"She has a real presence," Cahill says. "People talk about her speeches, and about how the audience is 'Mabelized' by her ability. White suffragists think she's phenomenal."

So much so that they ask the 16-year-old Lee to march on horseback at the front of a major suffrage parade in New York City in 1912.

It would take more than 20 years after the 19th amendment's ratification for Lee and other Chinese-American immigrants to become eligible for citizenship, and thus win the right to vote.

Also excluded from the franchise: Native Americans, many of whom were not made U.S. citizens until 1924.

Even after that, Native Americans in some states were considered "wards of the state" and weren't guaranteed the right to vote until passage of the 1965 Voting Rights Act. 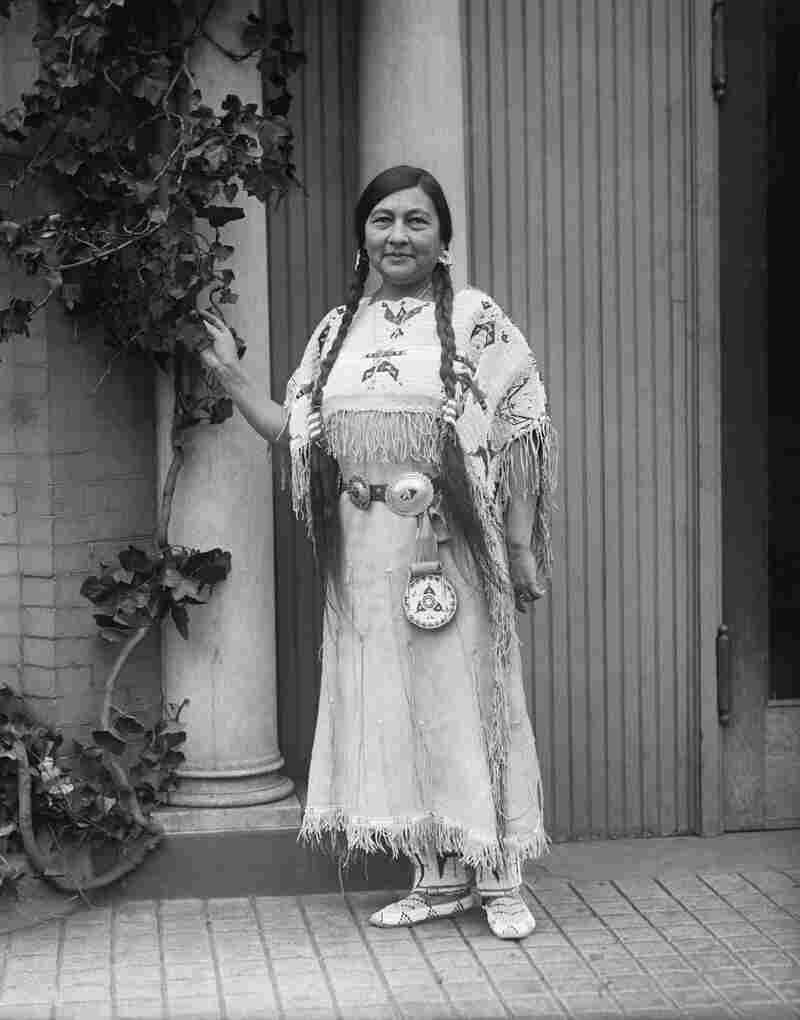 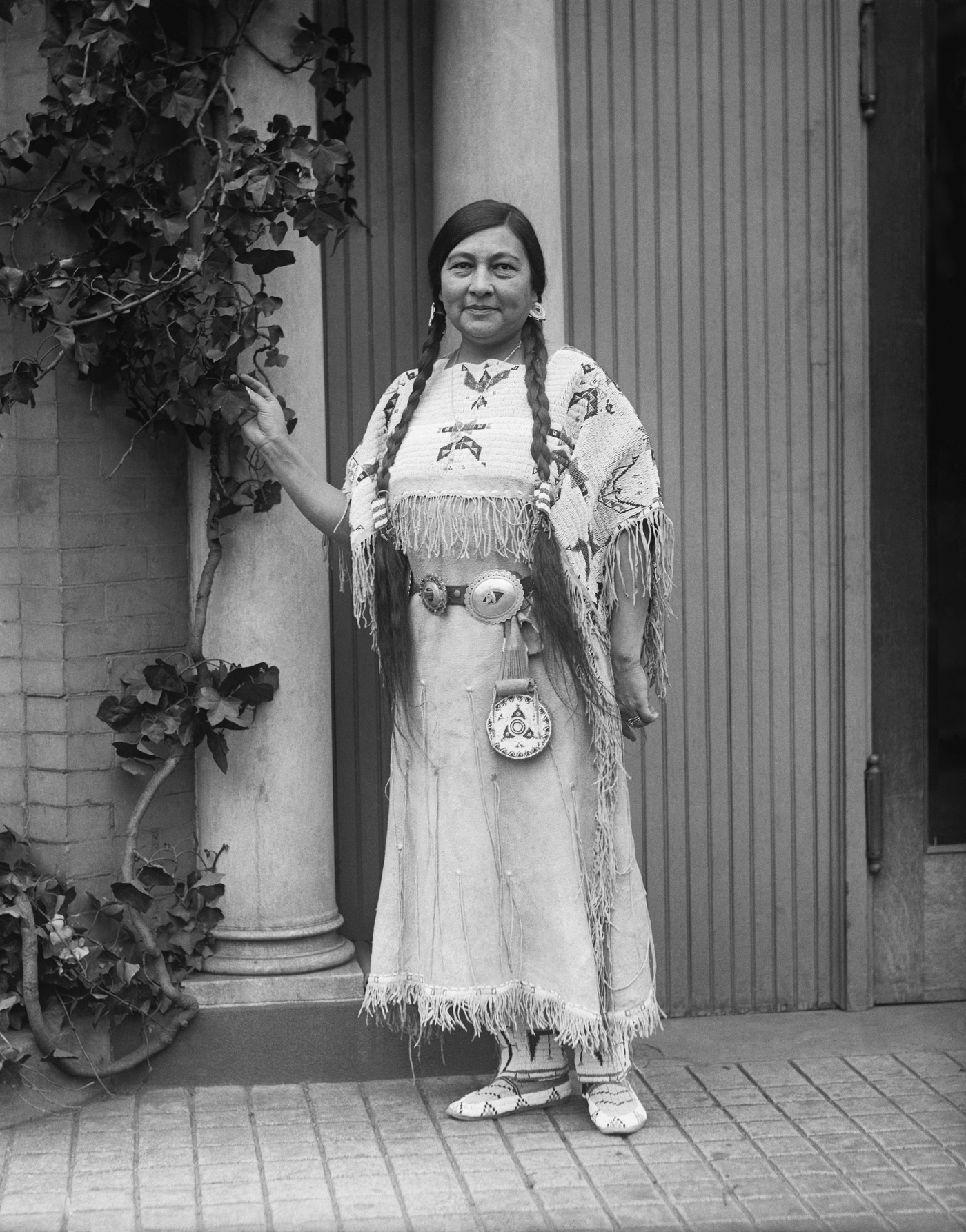 "She and other nationally known native suffragists don't necessarily want to only have U.S. citizenship," Cahill says. "They also want recognition of their citizenship in tribal nations and their treaty rights, particularly to land. They want to use suffrage and U.S. citizenship to save their land and their communities."

After the 19th amendment is ratified, Cahill says, Bonnin "spends the next several years going to white women and saying, 'Now you have the vote, please fight for my people.' She says, 'Don't forget your Indian sisters.'"

"It's never a done deal"

"A victory for some was not a victory for all, and fights continue today," says Marcia Chatelain, professor of history and African-American Studies at Georgetown University.

"I think what this year provides us an opportunity to do, as people celebrate 100 years of suffrage," she says, "is to ask the critical question: suffrage for whom and at what cost?"

In answer to that question, Chatelain points to the current struggles over voting rights.

"No one should celebrate anything as long as we live in a country that has such strategically created voter suppression," she says. "We really can't claim that the United States had an incredible victory in 1920, when in 2020 there are still far too many barriers for people to vote." 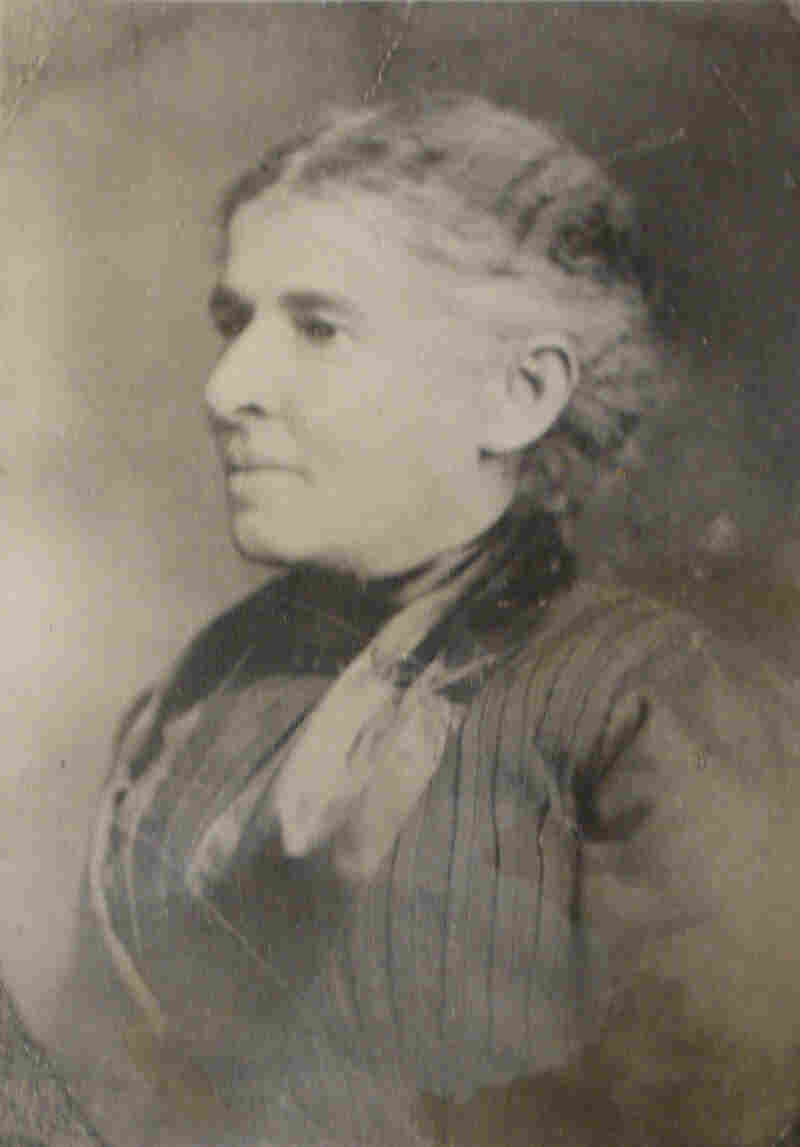 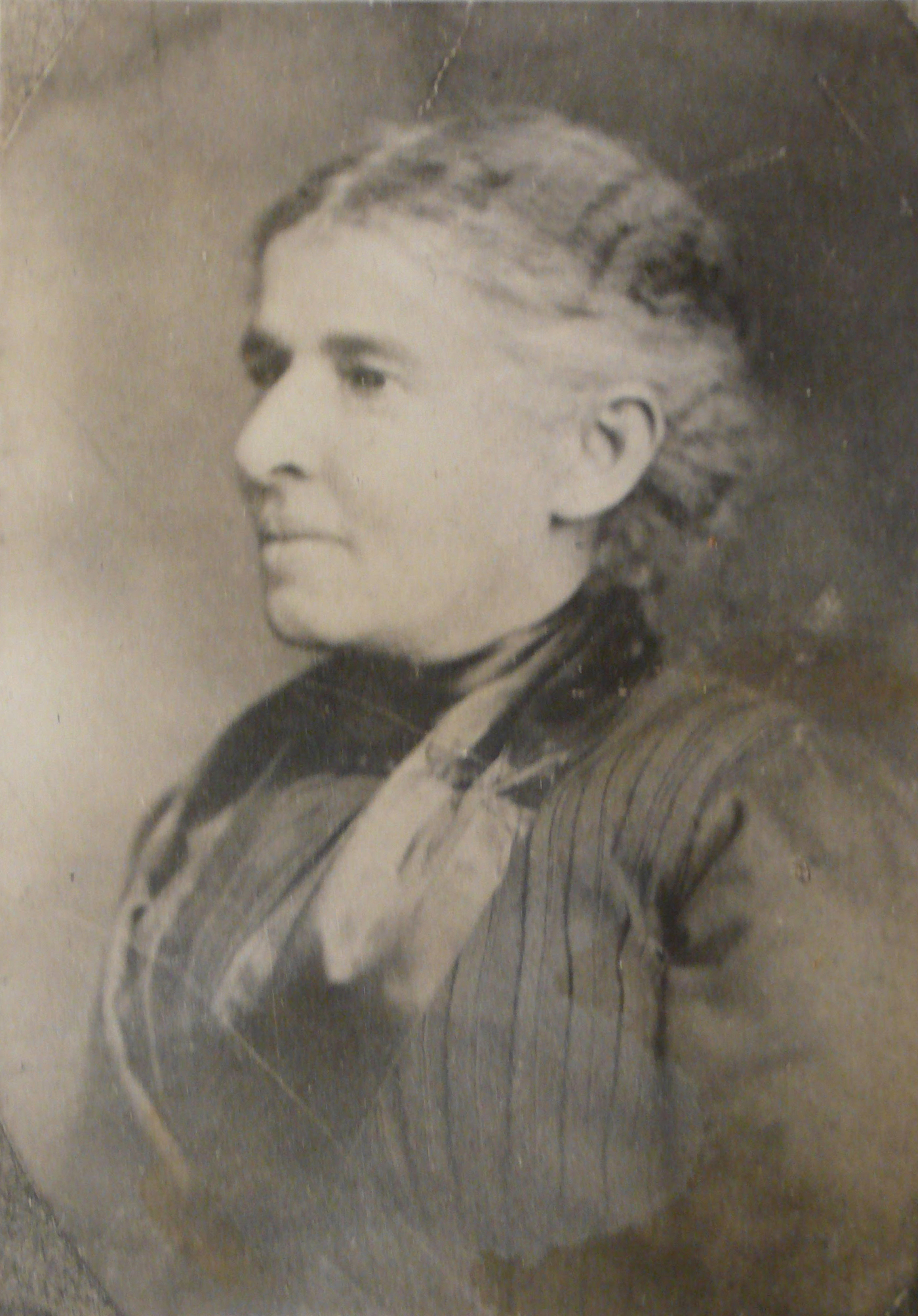 A portrait of Martha S. Jones' great-great-grandmother, Susan Davis, who was born enslaved in Kentucky.

For historian Martha Jones, the ratification of the 19th amendment "marks for African American women a start, not a finish."

"It fuels a new chapter in the struggle for voting rights in the United States," she says, "a movement that Black women will lead all the way to 1965 and passage of the Voting Rights Act."

"One of the lessons that we learn when we compare 1920 and 2020," she continues, "is that voting rights is never a given. It's never a guarantee. It's not a done deal in the United States."

In her office, Jones can look up at a visual reminder of that long history.

Hanging on the wall is a portrait of her great-great-grandmother, Susan Davis, who was born enslaved in Kentucky.

Jones likes to imagine her then-80-year-old ancestor on election day 1920, hitching up her horse and buggy, riding into town, "and getting into that line — a segregated line, but a line nonetheless — that would permit her and her daughter Lillian both to cast their first ballots."

"I can't say for sure that Susan and Lillian voted on that day," Jones says. "I sure hope they did."