Accessibility links
Germany Bans Prostitution During Pandemic. Sex Workers Say That Creates New Dangers Prostitution is legal in the country, but lawmakers have banned it to prevent the spread of the coronavirus. Sex workers say that has put them at risk, and they want to work legally again. 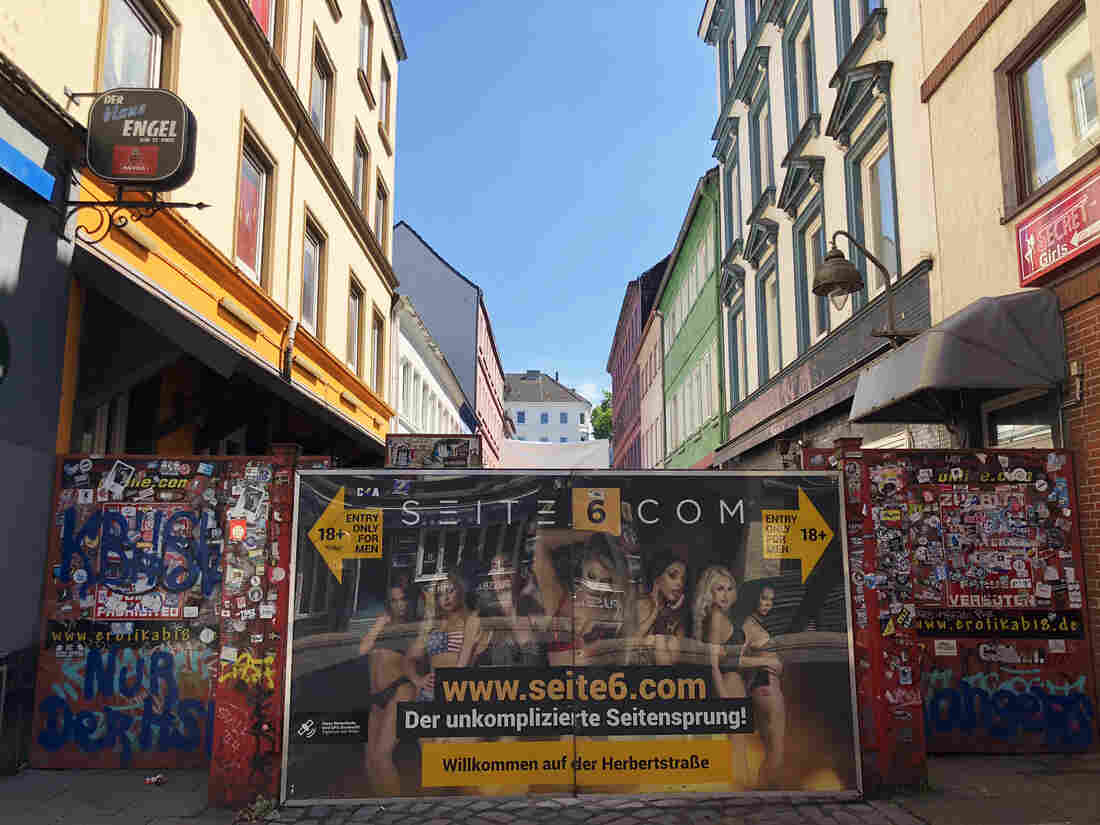 The entrance to Herbertstrasse, the heart of the red-light district in Hamburg, Germany. Prostitution is legal in Germany, but the coronavirus pandemic prompted lawmakers to ban sex work in March. Rob Schmitz/NPR hide caption 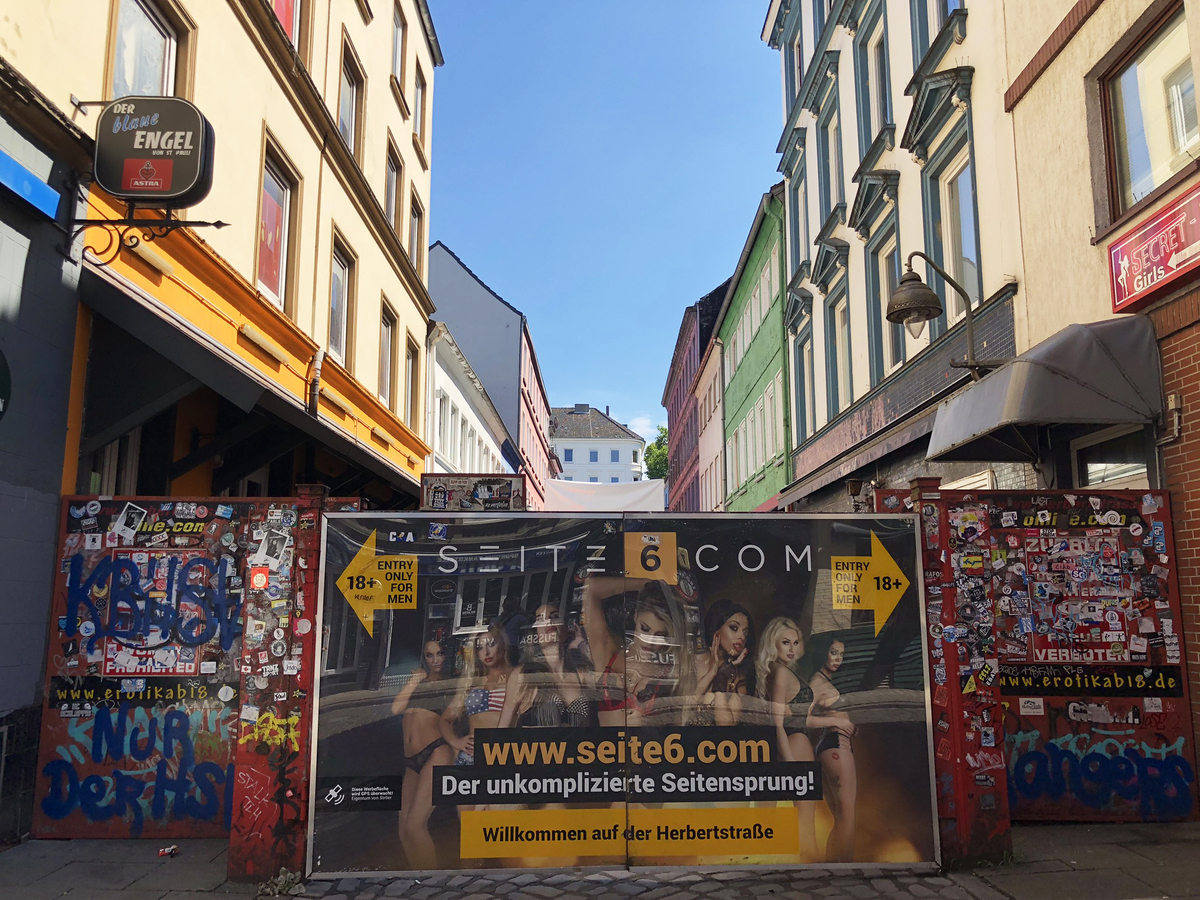 The entrance to Herbertstrasse, the heart of the red-light district in Hamburg, Germany. Prostitution is legal in Germany, but the coronavirus pandemic prompted lawmakers to ban sex work in March.

Among the twisting alleys of the St. Pauli district in Hamburg is the Reeperbahn, Germany's busiest red-light district. One stretch, Herbertstrasse, is blocked off to women who aren't sex workers. This part of Hamburg is nicknamed in German "die sündigste Meile," or "the most sinful mile." But for the first time in two centuries, this mile is less sinful than ever, thanks to the coronavirus pandemic.

Usually, "you can get whatever you want if you go on the right street," says Natalie, a Hamburg brothel manager. NPR is using only her first name to protect her identity as a figure in a controversial industry that's come under increased police scrutiny. But now, "it's a ghost town," Natalie says. "It's like a Western movie."

Prostitution is legal and regulated in Germany, but lawmakers banned it in March to prevent the spread of the coronavirus. At the start of the summer, as this country and the rest of Europe began to reopen their economies, Germany's prostitution ban remained in place. That has angered sex workers and brothel owners and managers such as Natalie, who say the prohibition has not only meant a sudden loss of income, but, more importantly, it has put the workers' lives in danger.

Natalie rents her brothel from a landlord and leases rooms to dozens of sex workers who charge their clients hourly rates. This economic chain, estimated to include as many as half a million sex workers and billions of dollars in revenue nationwide, was broken when the authorities shut the brothels. The workers responded over the summer with protests in Cologne, Berlin and Hamburg, demanding that the government let them go back to work, but Germany's government hasn't budged.

"If we only had one single [coronavirus] case among sex workers, it could potentially, during one day, reach more than 60 other people who would then spread it themselves," says Martin Helfrich, spokesman for Hamburg's Ministry of Social and Health Issues, the agency in charge of regulating the city's sex work industry.

He says the nature of sex work is justification for banning it during the pandemic. Contact tracing — which Germany has excelled at — is also difficult in an industry in which documenting clients' personal details is "expected to be flawed, since who wants to leave the correct contact details of his house and his wife with a prostitute?" Helfrich adds.

The city of Hamburg has stepped in to help by sending welfare checks to registered sex workers and even renting a hotel to house those with nowhere to live during the pandemic. But it has also overseen strict enforcement of the ban, issuing fines of more than $6,000 to sex workers caught working. (In Hamburg, there are no fines for their clients.) This has left workers such as Emily Adaire vulnerable.

Adaire, who identifies as a transgender female, asked NPR to use her professional name for fear of revealing her work to her family and the police.

"He demanded more stuff than usual for a quite low price, and I accepted," Adaire says. "I was like, 'OK, I can do it.' And then afterwards, he was not fully satisfied and he demanded back one-third of the cash."

She says she didn't know what to do. "And usually I don't do that because I think, 'OK, I got naked for you. I had sex with you. And it doesn't meet your expectations. I'm sorry, but I can't do anything about it,' " she says. "And then I was like, 'OK, you can just call the police on me.' And he was also a bit angry and I was a bit scared. So I just walked home and cried a bit."

Alina Prophet, who works at a community center for sex workers that is mostly funded by the city of Hamburg, says the ban means the workers are now just as vulnerable as their counterparts in much of the world where prostitution is illegal. 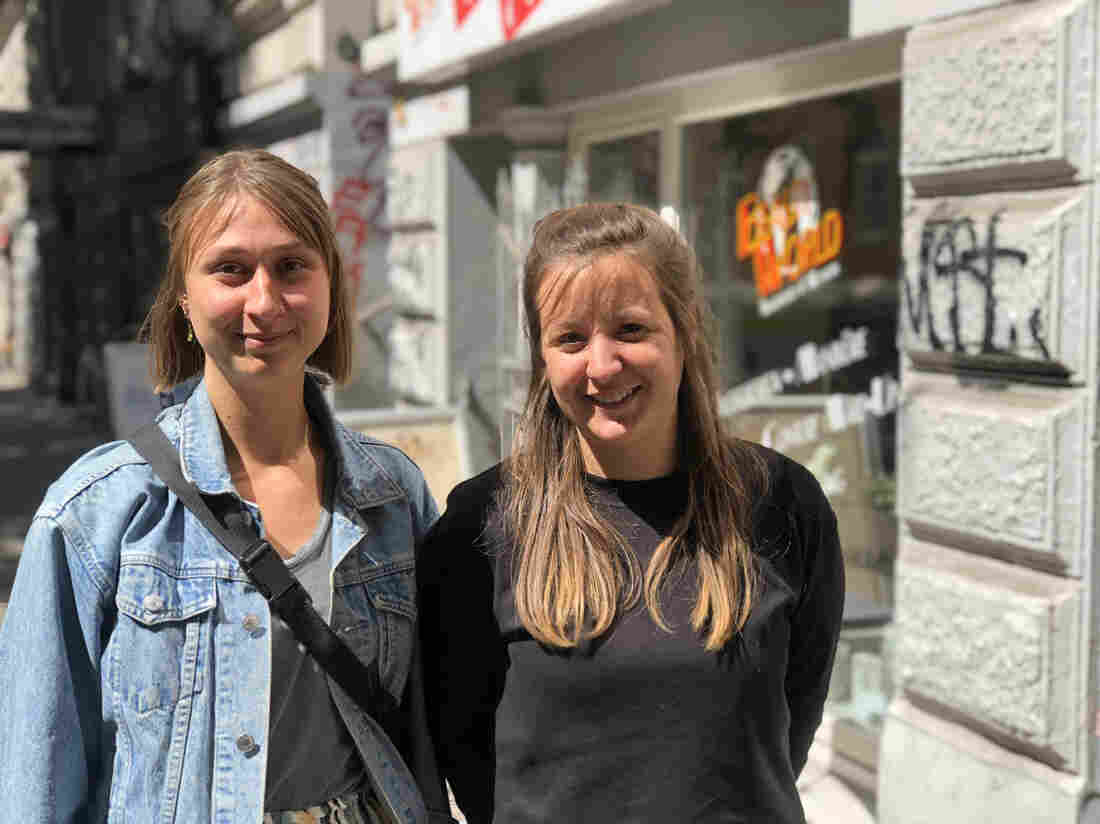 Social workers Alina Prophet and Anna Waxweiler counsel sex workers in Hamburg. They work at a center that is mostly funded by the city of Hamburg. Prophet says Germany's ban on sex work has made the workers more vulnerable. Rob Schmitz/NPR hide caption

"If they work now, they work in worse conditions because they can't do it officially," she says. "They can't call the police afterwards, if something bad happens to them."

Some of the most vulnerable among them are the many sex workers in Germany who aren't registered and are typically from Romania, Bulgaria and other parts of Eastern Europe. "They've lost the place where they stayed because the brothels closed, and now many have left, some have returned home, and some are staying at a client's place and are now in dependent relationships," Prophet says.

To help implement measures against the spread of the coronavirus, brothel owners and managers such as Natalie collaborating with sex workers came up with a hygiene plan they've shared with health authorities. "It's very smart because it goes from A to Z," Natalie says. "Even the people who were concerned at first, they were like, 'Oh yeah. That makes sense.' "

Spain, France And Germany Report Most Coronavirus Cases Since Their Lockdowns

The plan calls for sex workers and their clients to wear masks at all times except for during oral sex. "When it comes to oral sex, the face of the sex worker and the face of the client needs to be 90 centimeters away from each other," Natalie says. "We are Germans. We always stick to rules, and we do that even in the bedroom."

Natalie says nobody understands the importance of hygiene like sex workers. The city of Hamburg has hinted it will lift the ban on Sept. 1, but a recent spike in coronavirus cases in Germany may prevent that.