Accessibility links
We Must Save Our Own Water Supply Because 'Superman's Not Coming' Says Erin Brockovich The environmental activist and consumer advocate takes a brutally honest look at how mismanagement, chemical spills, mishandling of toxic waste, and even fake studies have damaged U.S. water systems.

Erin Brockovich Says 'Superman's Not Coming' To Save Our Water Supply

Erin Brockovich Says 'Superman's Not Coming' To Save Our Water Supply 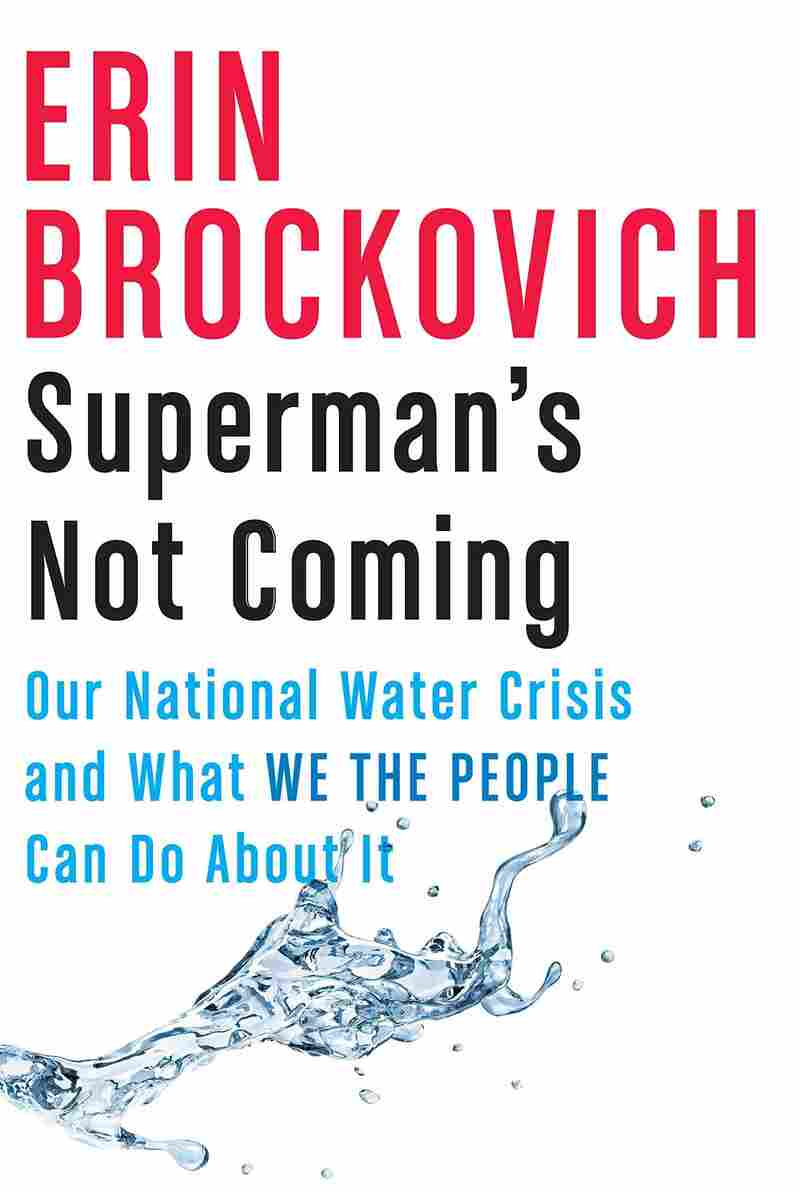 Superman's Not Coming: Our National Water Crisis and What We the People Can Do About It, by Erin Brockovich Pantheon hide caption 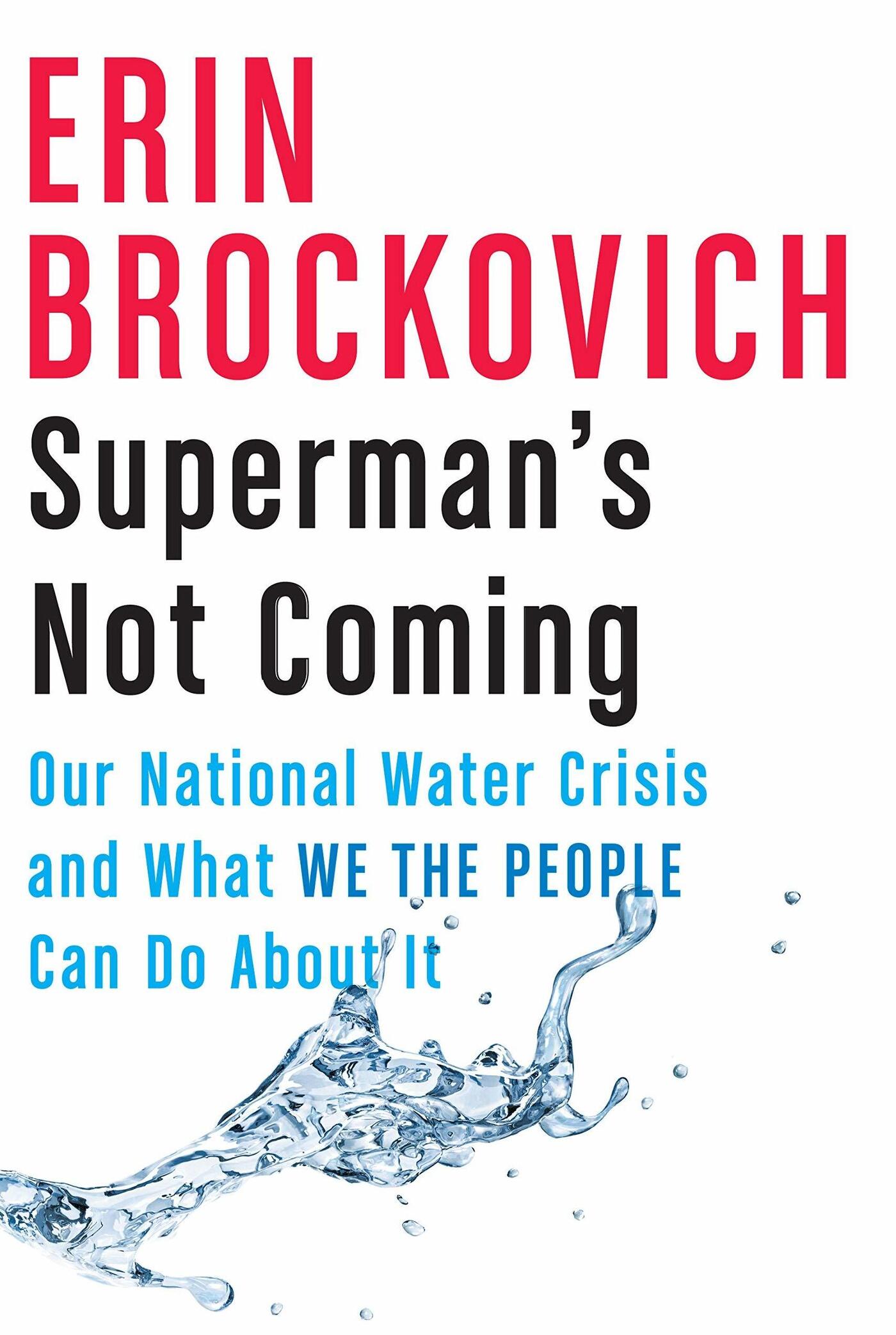 Superman's Not Coming: Our National Water Crisis and What We the People Can Do About It, by Erin Brockovich

If terrorists poisoned most of the water U.S. citizens consume, the event would take over the news cycle and it would be the only thing we'd talk about until the situation was fixed.

Well, the water is being poisoned — except it isn't coming from terrorists; it's being done by a variety of factories, companies, and processing plants.

So why are they not constantly on the news?

Well, because they lie about it and settle out of court when it's inevitable, regulatory agencies are struggling to keep up with the widespread problem, and the government often does everything in its power to keep the situation under wraps, says Erin Brockovich in Superman's Not Coming. In a new book, the environmental activist and renowned consumer advocate exposes some of the situations with water systems across the country today and the effects they have on people's health.

Superman's Not Coming: Our National Water Crisis and What We the People Can Do About It is a brutally honest look at how mismanagement, chemical spills, mishandling of toxic waste and sludge, and even fake studies have created the perfect storm in terms of damaging water systems in the United States. According to Brockovich, the average American uses nearly 100 gallons of water daily for everything from drinking and cooking to cleaning and bathing. Unfortunately, that water is not safe in many places across the country. It's full of plastics, lead, and chemicals like hexavalent chromium (chromium-6) — known as the "Erin Brockovich chemical" after Brockovich's fight in court won millions for the residents of Hinkley, a small town in California that had been affected by the chemical, and was immortalized in a movie where Julia Roberts won an Oscar for playing Brockovich.

Rashes, high blood pressure, infertility, cognitive problems, headaches, breathing problems, and a mindboggling variety of cancers are only the tip of the proverbial iceberg in terms of the consequences of unsafe water. Brockovich says:

"We are living in a hyper-toxic time. We aren't just dealing with the toxins themselves, but the fact that they have accumulated in the environment for long stretches of time. American children are growing up exposed to more chemicals than any other generation in history and it shows. Rates of chronic disease for children, especially those living in poverty, are on the rise. Nearly half of U.S. adults (or 117 million people) are living with one or more chronic health conditions."

The problem is huge, and it's only getting worse. In Superman's Not Coming, Brockovich delves deep into places where there are unreported cancer clusters to show us the extent of it. She also brings a layman's approach to the science behind the situation, explaining most of the pollutants affecting our water and discussing their effects on human health — as well as looking at why the measures put in place by regulatory agencies like the Environmental Protection Agency (EPA) are almost impossible to implement and control. While everything the author discusses is scary and should make readers feel angry, perhaps the scariest part of the book is that which Brockovich says isn't known. While the discussion of what we know about what's in our water is troubling, Brockovich also brings attention to the many pollutants scientists haven't studied yet — because there aren't regulations for these and their effects aren't known.

This is an impeccably researched book that brings science, court cases, depositions, interviews, history, and personal experience to the table to make strong points about the dire state of many of our water systems — and the consequences of it. Brockovich shows how things like suppression of research, intimidation of scientists, manipulated studies, and false scientific articles contribute to perpetuating the problem, and then she discusses what can be done about it.

There are side notes throughout the book that discuss, for example, some of the websites people can visit to report water and health problems or to see what has already been reported where they live. The phrasing in some of these can at times mimic the language and tone found in high school textbooks. However, they go well with Brockovich's straightforward prose and energetic writing style. She mixes law, science, and slices of life with her desire to help and educate and, while sometimes strange, it is always effective.

Despite all the gloom and doom found in its pages, not to mention the horrible health problems tackled, heartbreaking stories explored, and awful behaviors from corporations that are discussed, Superman's Not Coming is not a negative book at its core. Brockovich shows how bad things are, but she never gives in or despairs. Instead, she wants to educate people about their options, to give them the tools to start asking for changes. For example, there are instructions on how to request and understand a report on the water quality of your home. Also, there are many sources given in every chapter that can help people begin to fight back locally.

Yes, things are bad right now. But Brockovich invites everyone to be their own saviors — you know, because Superman's not coming — by telling us to "remember that we all have enough brains, heart, and courage to get the job done."