Accessibility links
RNC Shows The Republican Party Is Under Trump's Command This week's GOP convention is giving America a nightly view of the current Republican Party, under complete command of President Trump. 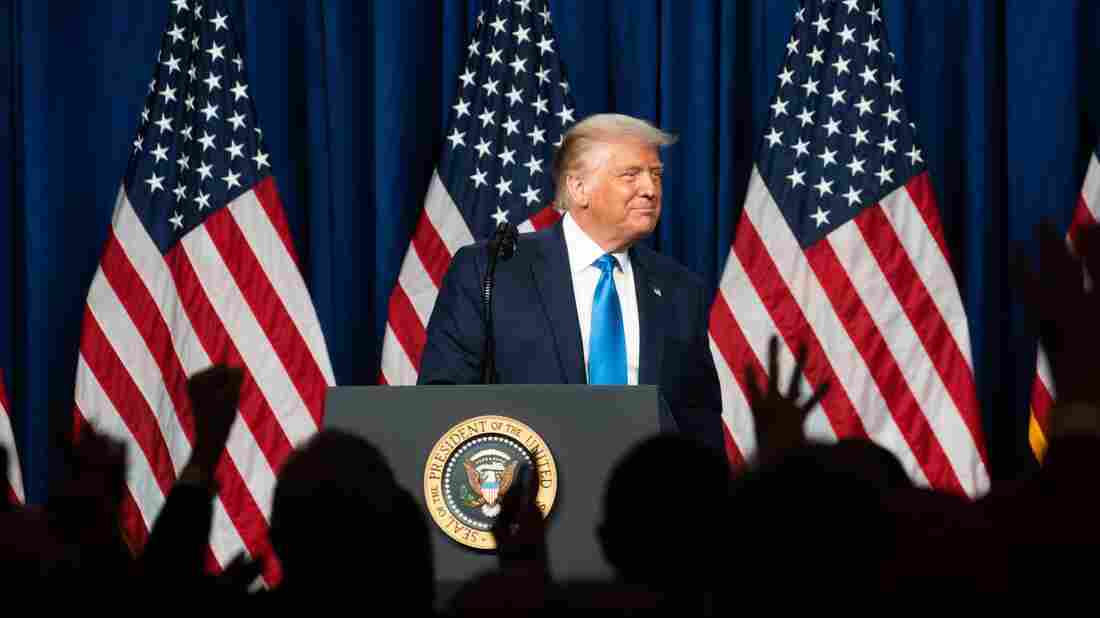 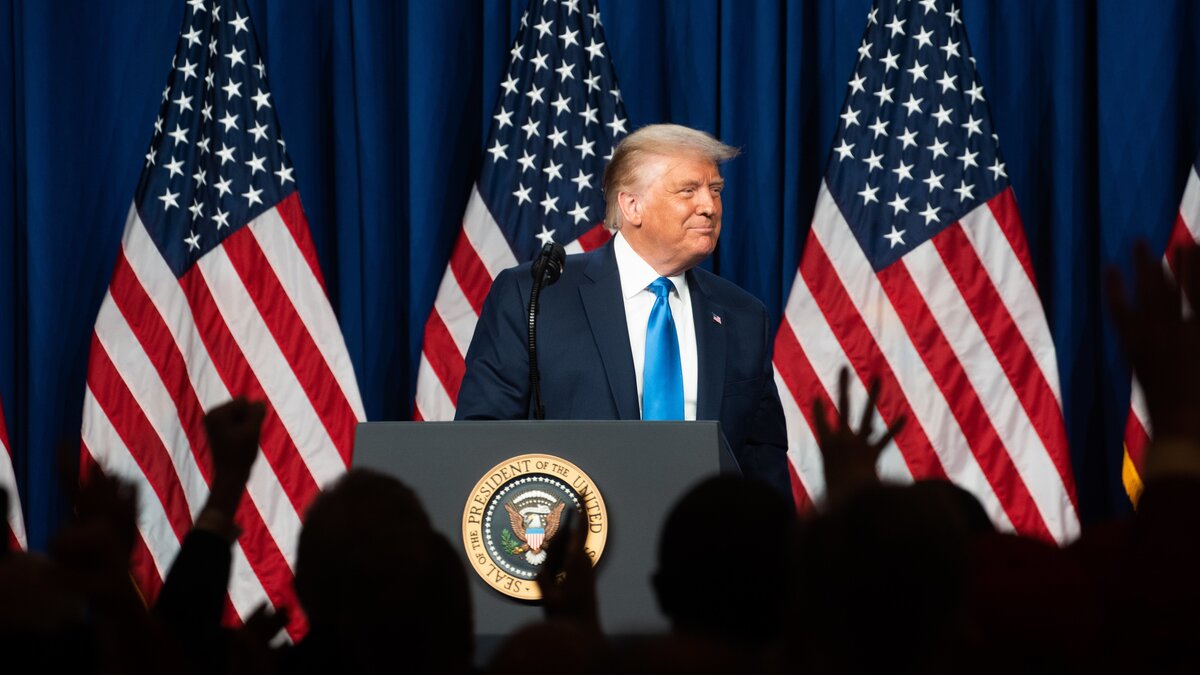 President Trump delivered lengthy remarks to delegates gathered in Charlotte, N.C., on the first day of the Republican National Convention.

Ask any Republican strategist about the state of their party in 2020 and you'll get an answer something like this from GOP consultant Antonia Ferrier. "This is Donald Trump's party," she said, "and I don't think that should be much of a surprise."

To underscore the point, the Republican National Committee decided not to write a new party platform this year. Instead, ahead of this week's GOP convention, the committee unanimously approved a resolution stating that the party "will continue to enthusiastically support the President's America-first agenda."

Ferrier comes from the establishment wing of the Republican Party. She worked as a communications adviser to current Senate Majority Leader Mitch McConnell of Kentucky and earlier for former House Speaker John Boehner of Ohio. She says the fact that the party is evolving is hardly unusual. All political parties change over time, she says, depending on issues and circumstances.

4 Takeaways From Night 2 Of The Republican National Convention

But there is something different this time, says conservative Ramesh Ponnuru of the American Enterprise Institute. It's that Trump's takeover comes absent any deeply held ideology.

"It's not like [1964 GOP presidential nominee Barry] Goldwater with Goldwater-ism or [President Ronald] Reagan with Reagan-ism," Ponnuru said. "There just really isn't a Trump-ism that transcends his whims of the moment."

A change on trade and taking Putin's word

A lot of long-held Republican beliefs — once seen as party dogma — have been jettisoned under Trump.

The party of free trade has backed Trump as he imposes tariffs and criticizes trade deals. Most notable is his withdrawal from the Trans-Pacific Partnership, a pact negotiated by the Obama administration and designed to be a counterweight to China's growing economic power.

On national defense, the president accuses NATO allies of not carrying their weight and essentially freeloading off the United States.

Then there's the longtime GOP hard line regarding the Soviet Union and Russia.

Think back to 1987 and one of the defining moments of Reagan's presidency. Standing near the Berlin Wall and the famed Brandenburg Gate, Reagan sent a message to the leader of the Soviet Union: "Mr. Gorbachev, tear down this wall." 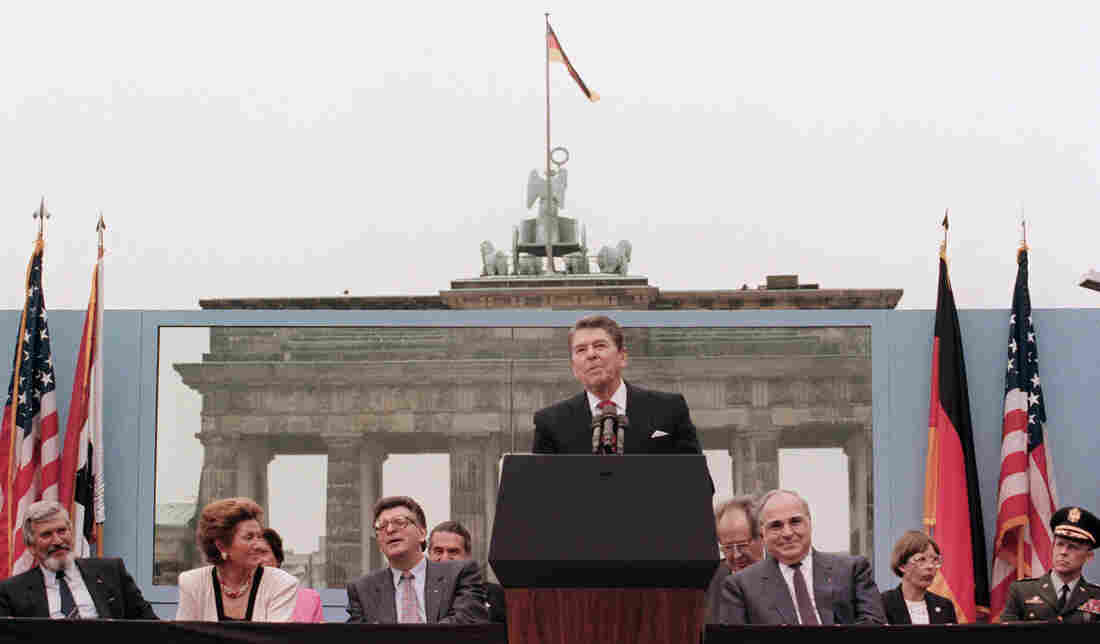 President Ronald Reagan addresses the people of West Berlin at the base of the Brandenburg Gate on June 12, 1987. Mike Sargent/AFP via Getty Images hide caption

Reagan has another famous line he used when describing his dealings with the Soviets: "Trust but verify."

Trump and Putin met in Helsinki in 2018, not long after U.S. intelligence agencies had concluded that Russia had interfered in the 2016 U.S. election. Asked at a news conference whether he'd confronted Putin about the revelation, Trump answered, "I have great confidence in my intelligence people, but I will tell you that President Putin was extremely strong and powerful in his denial today."

A key issue for Trump during the campaign and as president has been his hard line on immigration. Again, his stance is a far cry from recent Republican presidents.

"When I was governor of Texas I liked to say family values do not stop at the Rio Grande River," Bush said in a speech near the border with Mexico. 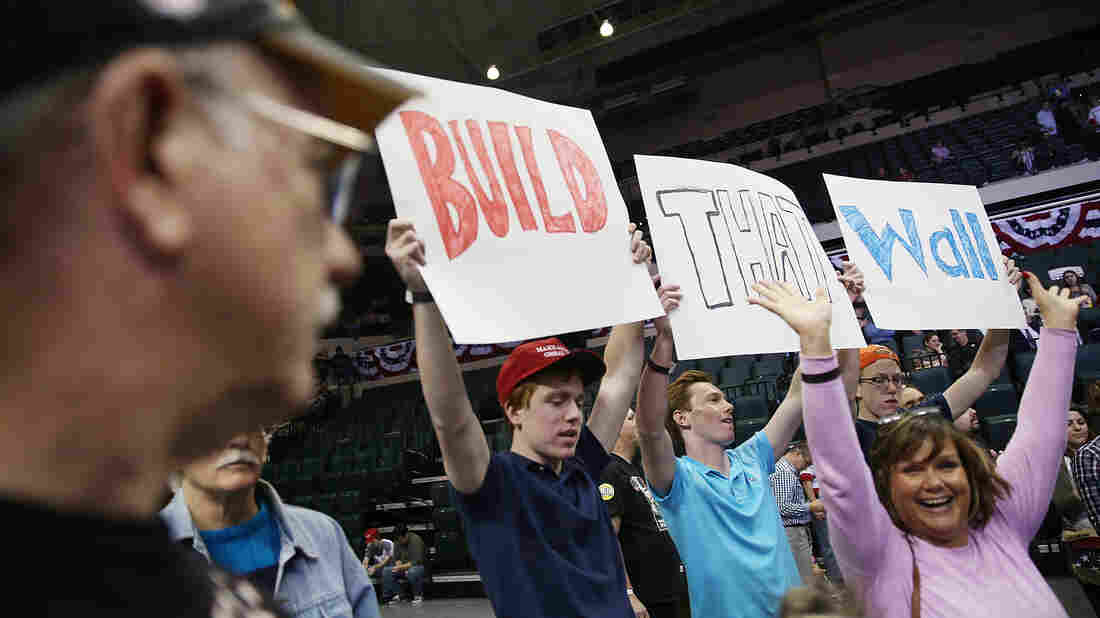 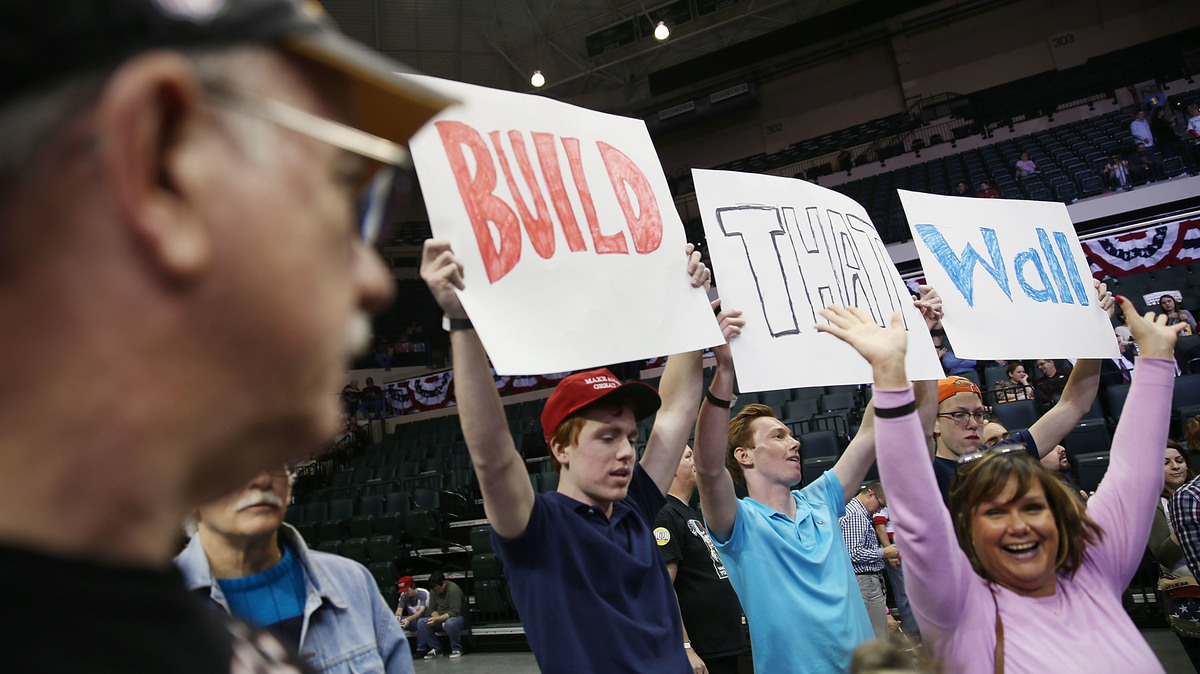 People hold signs that read "Build That Wall" ahead of a Trump campaign rally on Feb. 12, 2016, in Tampa, Fla.

You'll hear no such comments from Trump, who has largely kept up the tone of the rhetoric he used in his very first speech as a presidential candidate.

The president tapped into existing anti-immigrant sentiment in the Republican Party. Same with his attacks on global trade deals. Many working-class voters felt they suddenly had a champion in Trump.

Tom Zawistowski, a Tea Party leader in Northeast Ohio, says it was like they'd found someone who'd been listening to what his movement had been talking about for years.

"This whole idea of, what about our jobs?" Zawistowski said of Trump. "He talked about the 'forgotten man' in 2016. You know, he talked about manufacturing jobs when the elites in both parties were basically saying, 'Hey, if you like to do manufacturing, tough luck.' "

While some may not like his Twitter habit, polls show sky-high approval for Trump among Republicans. Social conservatives praise Trump's judicial appointments. Others celebrate the 2017 tax-cut package. And many cheer his attacks on the media.

Such solid GOP support comes even amid the pandemic, the more than 175,000 U.S. deaths it has caused so far, and the dive the economy and employment took as well.

Then there are those Republicans who have not been able to abide the president's decisive takeover of their party. Many simply call themselves "Never Trumpers."

Stuart Stevens, a former top presidential campaign strategist to GOP nominees George W. Bush and Mitt Romney, is one of them. Now he's working to defeat Trump by joining a group known as The Lincoln Project, which frequently produces viral ads attacking Trump.

Stevens doesn't hesitate to call Trump racist, and in an interview on Fresh Air earlier this month, he said the current campaign reflects that. Looking ahead to the final months before Election Day, he said of the president: "It's going to be a racial grievance campaign unlike we have ever seen on the national stage."

As for the Republican Party, Stevens said he's "extraordinarily negative on the prospects of the party." Democrats overwhelmingly win the votes of African American and Latino voters, and now younger voters. Stevens says with the country becoming more diverse demographically, that's a crisis for the GOP.

"And what does that mean for the Republican Party?" he asked. "It's a stage 4 cancer warning and the party gives no reason that it's going to change."

Instead, Stevens said, Trump is actively driving those voters away.

It's his party — will it last?

As for how lasting Trump's transformation of the GOP will be, that depends on the election.

If he wins, the story continues. But if he loses, says AEI's Ponnuru, there'll be a push to move on to someone else. He cites recent incumbent presidents defeated after one term — Jimmy Carter and the first George Bush — as two whose influence on their party faded instantly.

But Trump, he said, may be a different case. First off, if he loses, he'll likely say the election was "rigged." Further, he's not likely to exit the political arena as others have. Trump will likely still be on cable TV and certainly on Twitter, Ponnuru said. "That's going to be a very delicate problem of coalition management and expansion for any future Republican Party."

GOP strategist Ferrier put it this way: "If there are those who believe that the Republican Party is just going to snap back to some status quo ante of, say, the Bush administration, I think that is misguided."

Meanwhile, this week's GOP convention is giving America a nightly view of the current Republican Party, under complete command of President Trump.