Accessibility links
Trump Campaigns On Law And Order Message Critics Say Is Racist Trump campaigned in 2016 on a promise he would make cities safer. Now running for reelection, he vows to protect the suburbs from the cities. 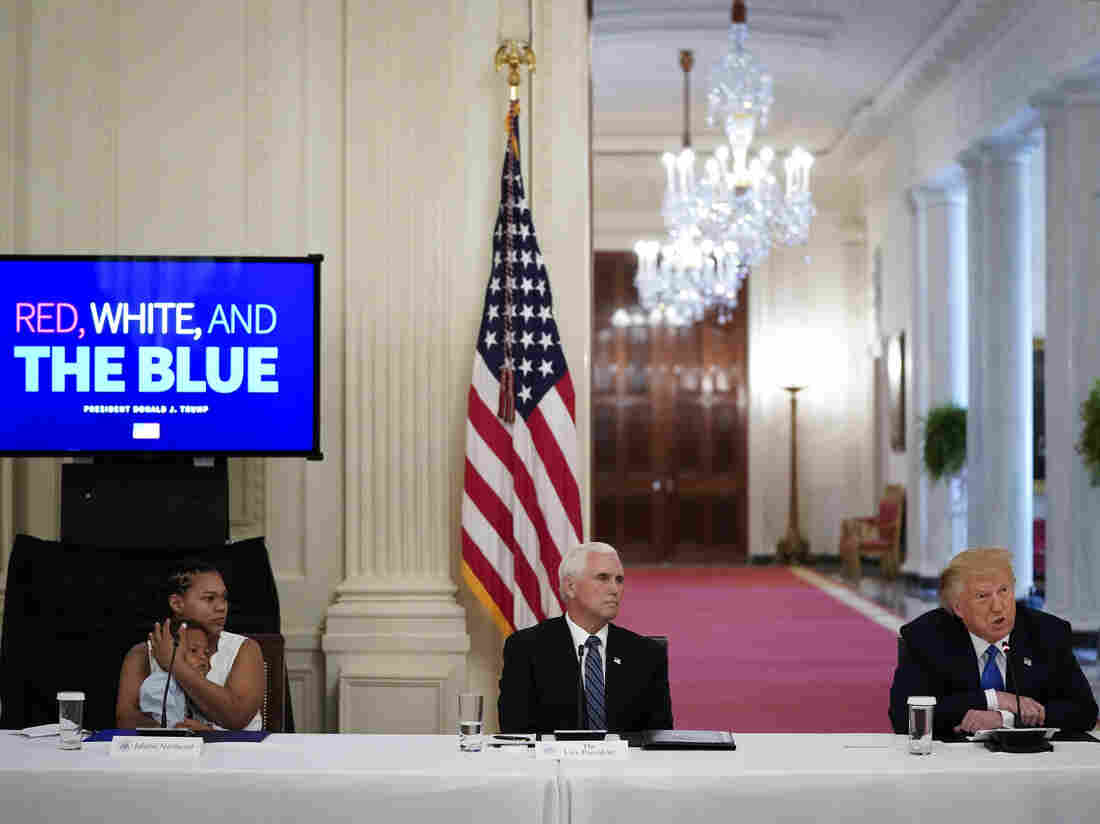 President Trump has responded to a groundswell of demands for policing reforms after officer shootings of unarmed Black men by doubling down on his support for law enforcement. Drew Angerer/Getty Images hide caption 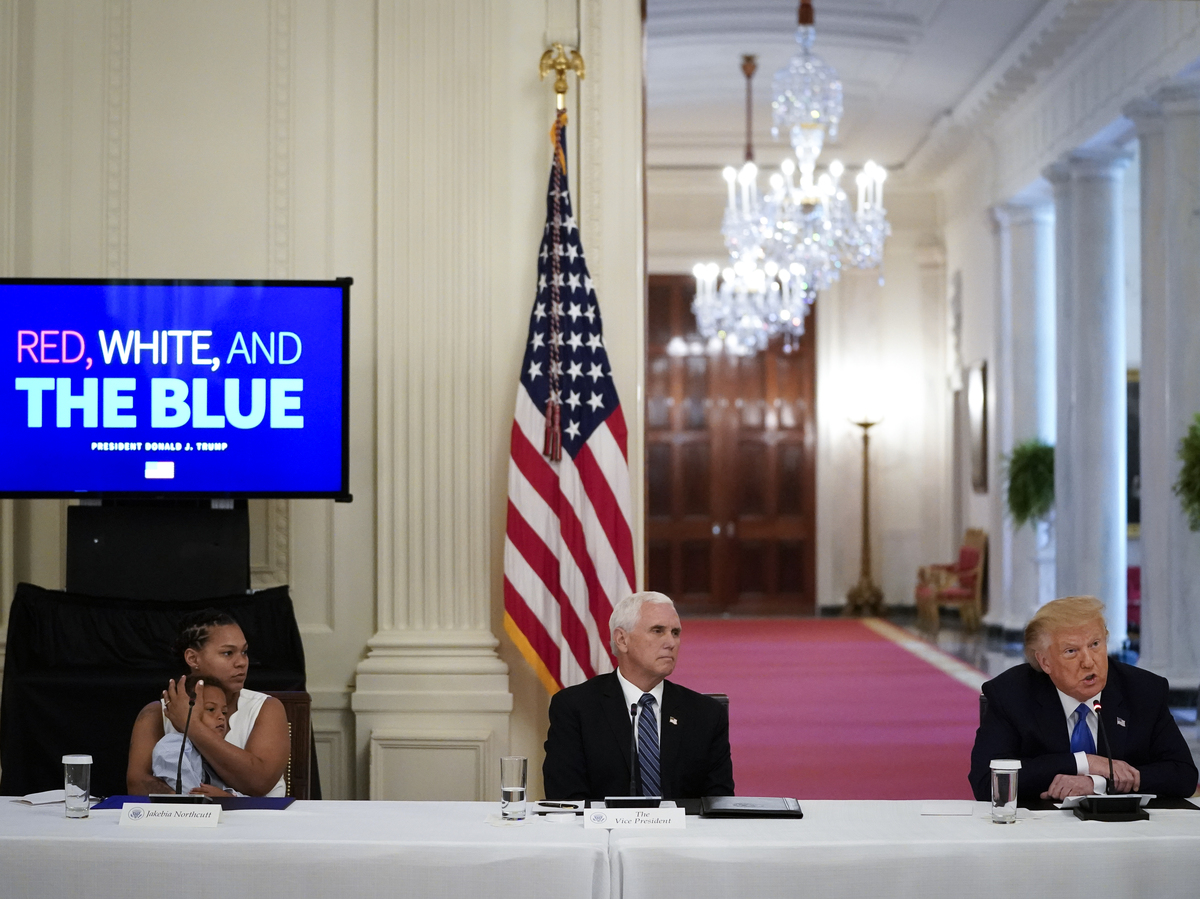 President Trump has responded to a groundswell of demands for policing reforms after officer shootings of unarmed Black men by doubling down on his support for law enforcement.

There are three words never far from President Trump's lips this summer: "law and order."

As the country has recoiled against police brutality, sparking protests across the country, Trump has used the well-worn phrase over and over again in speeches, at times tweeting it in all caps.

The message took center stage again at the Republican National Convention, as Trump presents himself as a "tough on crime" leader protecting the suburbs from the violence of U.S. cities.

It's a variation on a theme that has been central to Trump's political rise, and now Trump is betting that it will help get him reelected.

"The words 'law and order' are words that Democrats don't like to use," Trump told a crowd in Minnesota last week. "They don't think they're politically good. There's nothing wrong with law and order. There's law and order, and you shouldn't be ashamed of it."

Critics say Trump's focus on cracking down on "inner city" crime harkens back to racist campaigns from the likes of segregationist George Wallace in the 1960s. 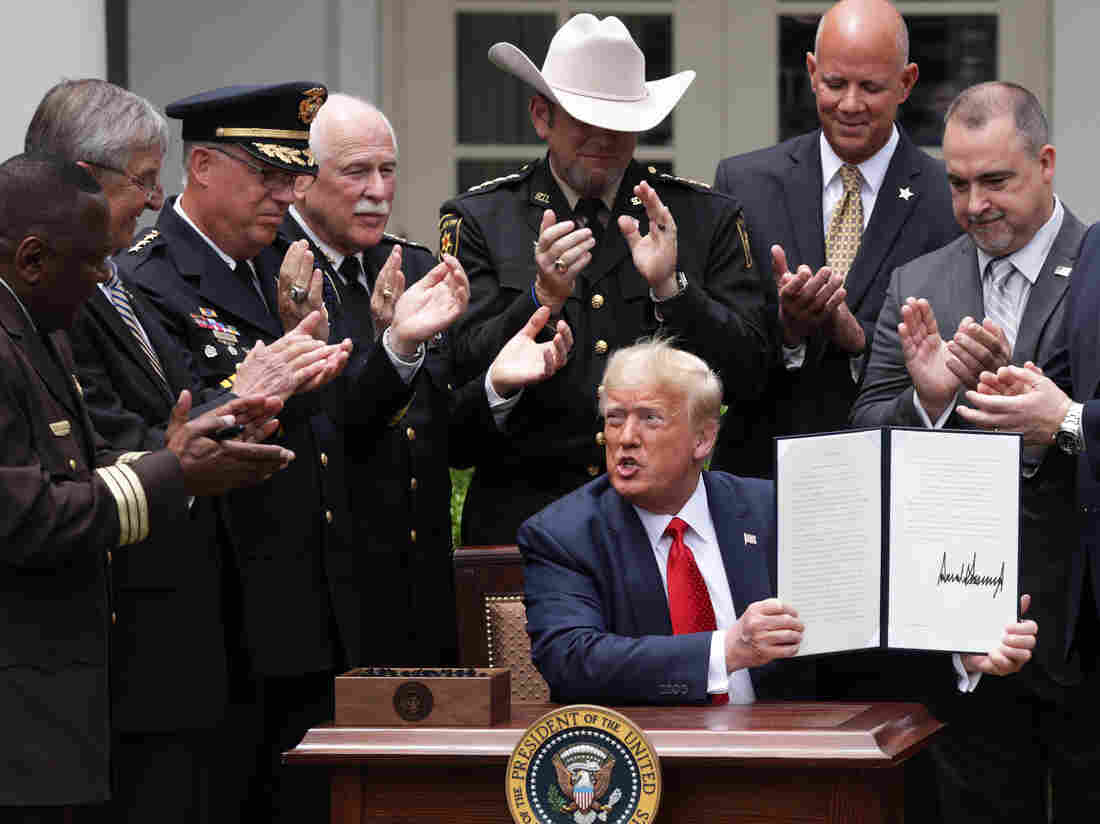 President Trump surrounded himself with supportive law enforcement officials, signing an executive order on reforms this summer after the killing of George Floyd at the hands of police. Alex Wong/Getty Images hide caption 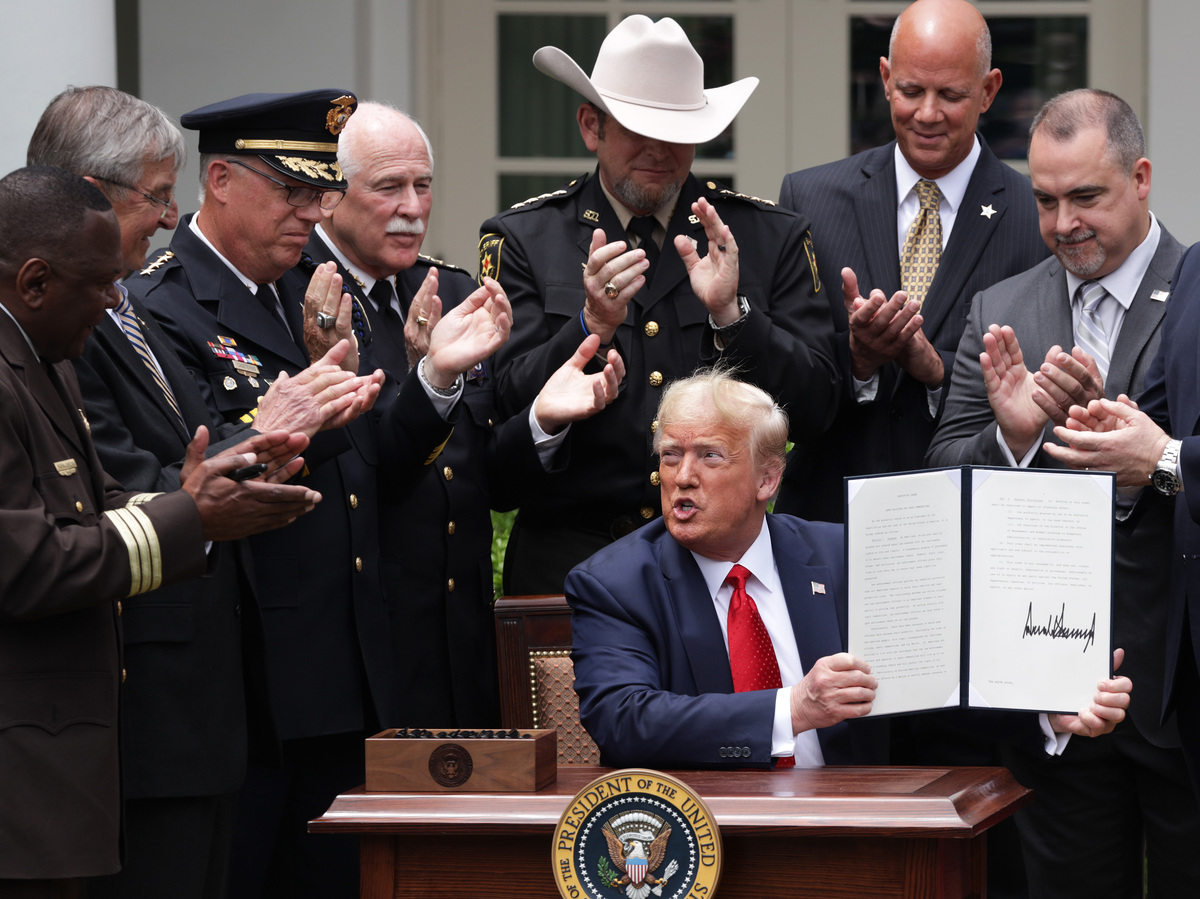 President Trump surrounded himself with supportive law enforcement officials, signing an executive order on reforms this summer after the killing of George Floyd at the hands of police.

NPR examined the way Trump has talked about "law and order" over the years, using a database compiled by Factba.se, a website that collects all of Trump's public statements.

The specifics of Trump's rhetoric have evolved over time to fit a changing political landscape. But, certain themes — such as allowing the police to get "tough" — have remained the same.

Trump's first major foray into public commentary on crime happened in 1989. Trump, then a real estate developer, took out a full-page ad in The New York Times calling for the death penalty against five Black and Latino boys accused of attacking a woman in Central Park.

"What has happened to law and order ...?" Trump said in the ad. "Let our politicians give back our police department's power to keep us safe. Unshackle them from the constant chant of 'police brutality,' which every petty criminal hurls immediately at an officer who has just risked his or her life to save another's."

The five boys accused of the crime were exonerated years later. Trump has never apologized for the ad.

Pence Warns Of An Unsafe America Under Biden: Takeaways From Day 3 Of The RNC

In the years leading up to his run for president, Trump often talked about crime in relation to terrorism, calling for swift executions.

In his first campaign for the White House, Trump linked urban crime to illegal immigration, even though studies have shown that people in the country illegally are not more likely to commit crimes.

"Many of these gang members are illegal and they're tough dudes. They will be out of there so fast, your head will spin," Trump said in 2015, talking about Chicago and Baltimore.

Throughout 2016, Trump made the case that electing him would make these cities safer.

Now, as president, he has placed the blame for crime mostly on local Democratic leaders. He argues that reelecting him will protect the rest of the country from the turmoil of U.S. cities.

We will NOT stand for looting, arson, violence, and lawlessness on American streets. My team just got off the phone with Governor Evers who agreed to accept federal assistance (Portland should do the same!)...

"If you want a vision of your life under Biden presidency, think of the smoldering ruins in Minneapolis, the violent anarchy of Portland, the bloodstained sidewalks of Chicago, and imagine the mayhem coming to your town and every single town in America," Trump said earlier this month.

"It's playing on fear of Black people, of Black leadership, of Democratic leadership. It's embarrassing. It's awful," Lucas told NPR.

Lucas is a Black Democrat and took office as mayor last year. Kansas City has been one of the targets of some of Trump's rhetoric. The Trump administration recently sent federal agents to Kansas City to combat a spike in crime that included the shooting death of a 4-year-old boy. 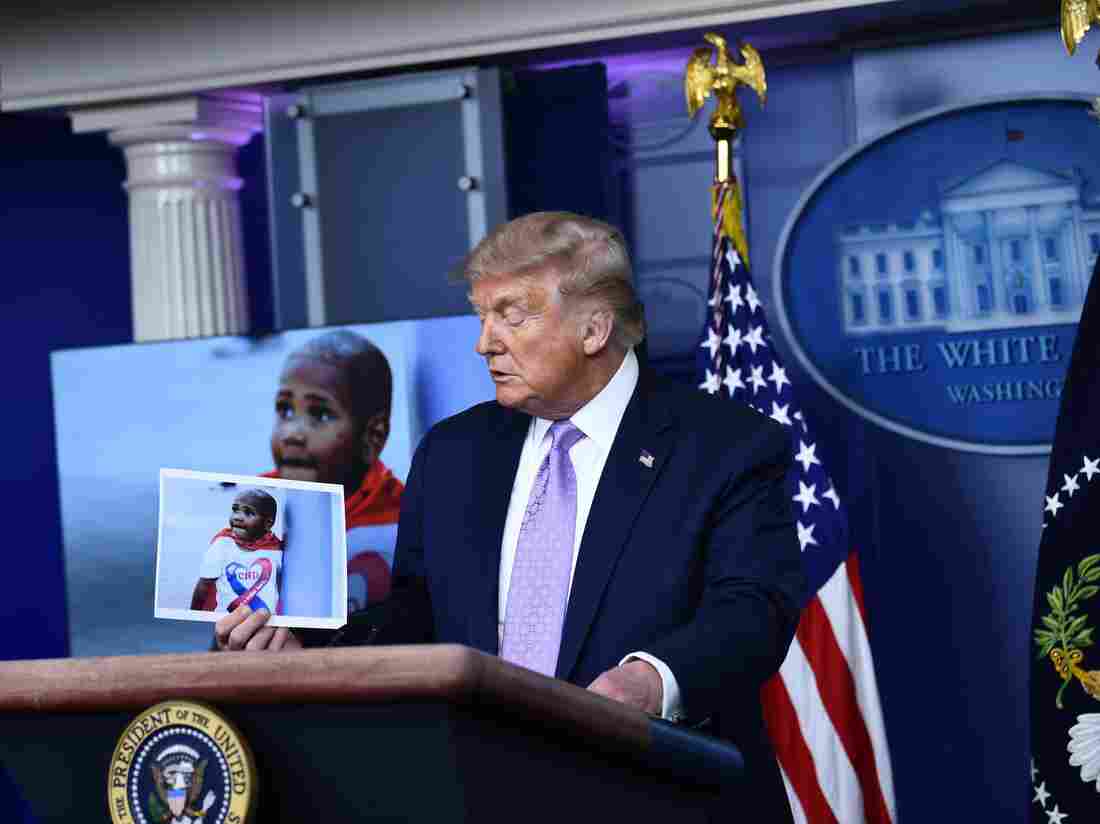 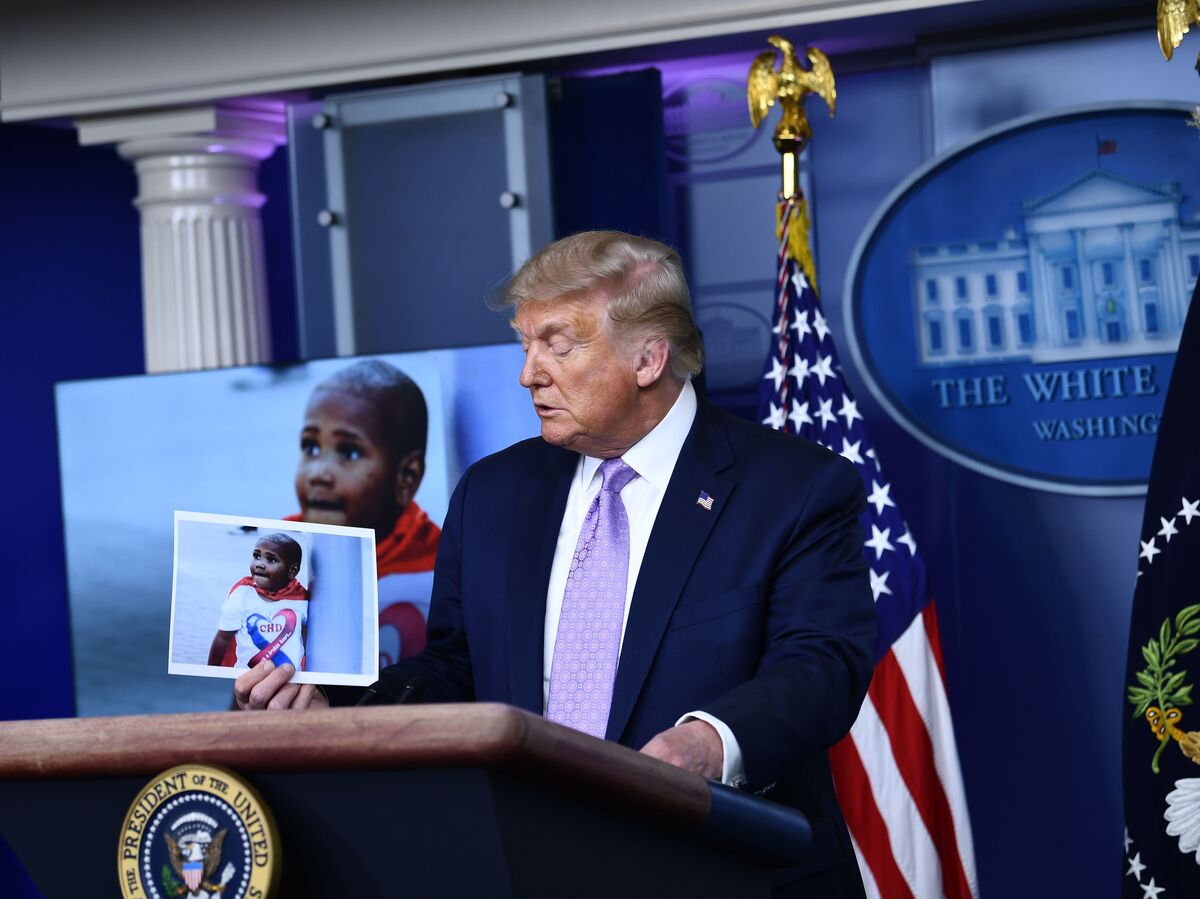 Lucas said he was blindsided by the federal government's action, which he argued is a short-term political move that will not be a long-term solution.

"We're not enemies, right? I don't want people murdered in Kansas City," Lucas said. "I just want us to work together, rather than just seeing this used as pure political points in a time when we don't need to divide America or Kansas City even more."

Trump's rhetoric and actions are not helping to deal with actual root causes of crime, like the lack of services and opportunities, said Tracy Siska, the head of the Chicago Justice Project, which pushes for data-based solutions to violence in the city.

"It's completely rebuilding that social fabric in those communities," Siska said. "Everyone says in Chicago and around the community, 'We're not going to arrest our way out of it.' And then all they do is try to arrest their way out of it."