Accessibility links
Peaceful Protests In Kenosha, Wis., As Demonstrators Remember Shooting Victims The shootings of the three protesters appeared to change the tenor of demonstrations on Wednesday night. The protests had turned violent a night earlier when two people were killed. 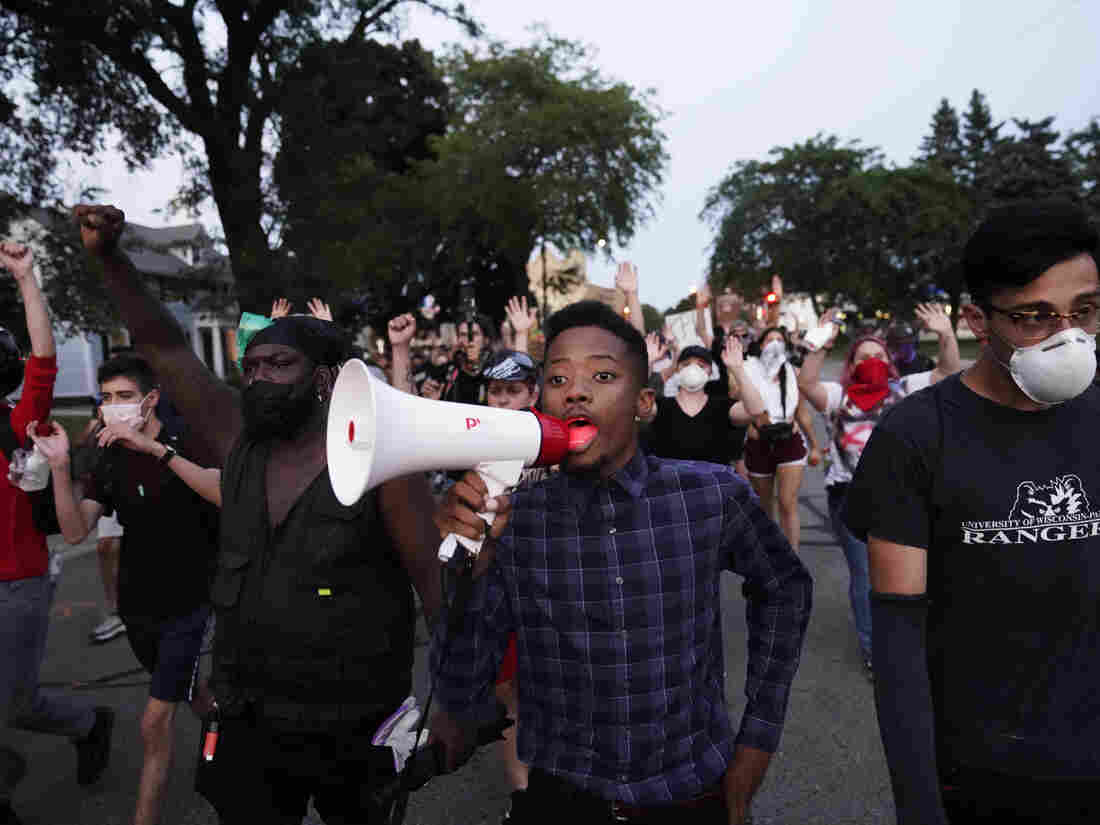 Protesters march Wednesday against the police shooting of Jacob Blake in Kenosha, Wis., over the weekend. David Goldman/AP hide caption 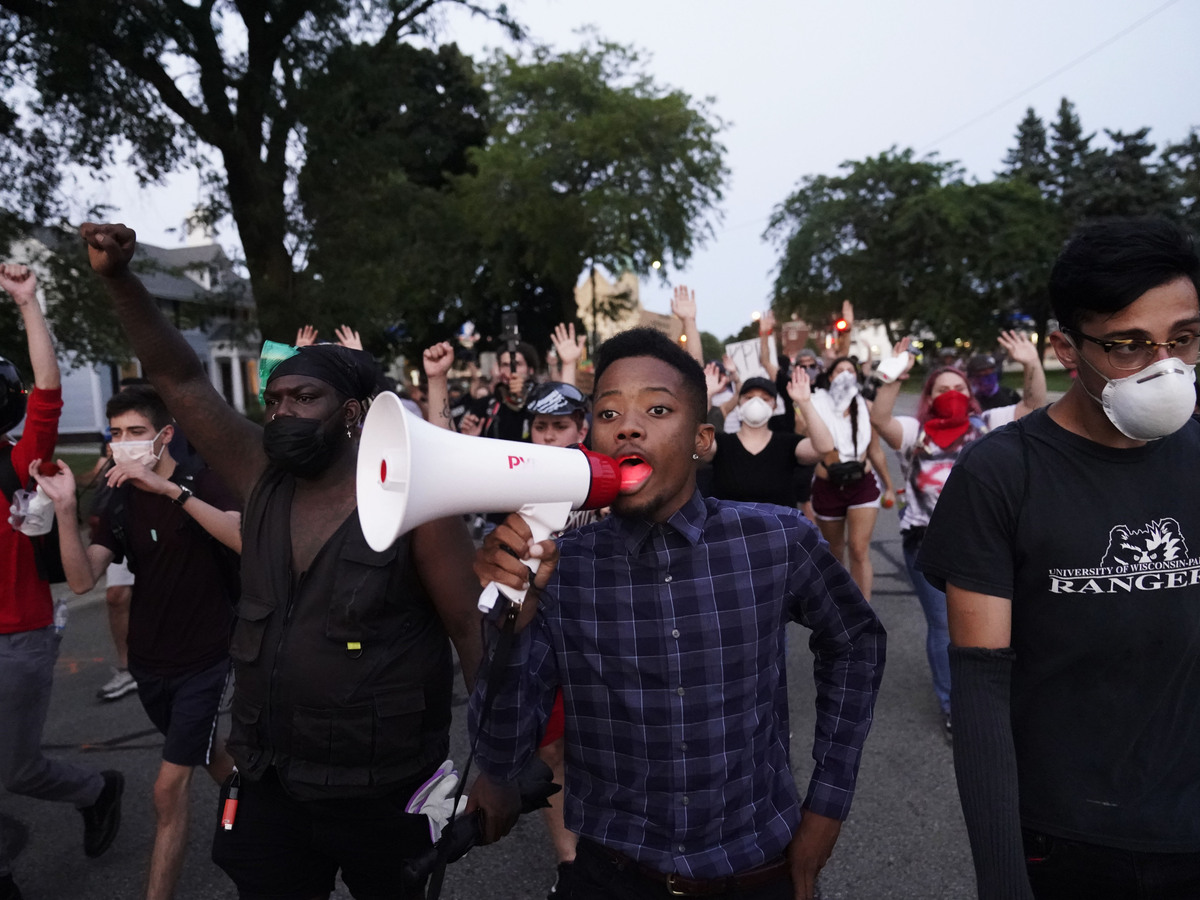 Protesters march Wednesday against the police shooting of Jacob Blake in Kenosha, Wis., over the weekend.

Protests over a police shooting of a Black father in Kenosha, Wis., continued for a fourth straight night on Wednesday. Though the gatherings again defied the county-imposed curfew, the demonstrations remained mostly peaceful.

The crowds were smaller than on previous nights, and the relative calm was a stark contrast to the scene that unfolded during the third night of protests, which turned chaotic and deadly.

Law enforcement officials apprehended 17-year-old Kyle Rittenhouse, who is facing a charge of first-degree intentional homicide in connection with the shooting of two people during demonstrations late Tuesday. A third person was also shot but is expected to survive.

Police did not name the shooting victims, but said the fatalities were both Kenosha-area residents: One was 26 years old, and the other was 36.

The shootings of the three protesters appeared to change the tenor of demonstrations Wednesday night.

One of the protest organizers, lifelong Kenosha resident Porche Bennett, called for a moment of silence to remember the shooting victims along with Jacob Blake, who was shot multiple times Sunday at close range and severely wounded by a police officer.

After the moment of silence, Bennett implored protesters to go home at the curfew time, which authorities moved up an hour to 7 p.m.

"We don't want what happened [on Tuesday] night to happen again," Bennett yelled through a megaphone.

Bennett, 31, said she knew the two people who were killed, adding that all three victims were daily fixtures at the protests against police shootings and racial inequality.

One of them she said she called "my hippie guy," because of his long hair, beard and the way he dressed. And she said he protected her from rubber bullets police were firing during one of the first nights of protests.

"They were sweet, really sweet guys," she said while fighting back tears.

The investigation into the shooting is ongoing. At a Wednesday afternoon press briefing, officials said they were unclear what led the suspect to use deadly force.

Rittenhouse, who was arrested in nearby Antioch, Ill., about 15 miles southwest of Kenosha across the Wisconsin-Illinois border, is a staunch supporter of law enforcement.

On social media posts he is seen posing for a picture of a "public safety cadet program" in Chicago's northern suburbs, and he also posted tributes to Chicago officers who had been killed in the line of duty.

In an interview with the Daily Caller before the shooting, a white male whom the conservative website identified as the suspect described why he was at the protests armed.

"So people are getting injured and our job is to protect this business," he says. "Part of my job is to also help people. If somebody's hurt, I'm running into harm's way. That's why I have my rifle to protect myself obviously, but I also have my med kit."

As NPR reported Wednesday, people associated with a local armed militia were present during previous days of protests, claiming to be in Kenosha to guard property from being destroyed by looters.

It's unclear if the suspect was part of the group.

Facebook confirmed to NPR that it had taken down a page belonging to a group called Kenosha Guard because it "violated our new policy addressing militia organizations and have been removed on that basis," according to a spokesperson for the social media company.

Facebook also said it found no evidence that the suspect followed Kenosha Guard or was invited to an event organized by the group.

He was the only officer to discharge his weapon. Authorities said Blake "admitted that he had a knife in his possession. [Division of Criminal Investigation] agents recovered a knife from the driver's side floorboard of Mr. Blake's vehicle," according to a Wisconsin Department of Justice statement.

The department's investigation into the Blake shooting is ongoing, and the findings of the probe will be submitted to prosecutors. The identities of the other officers present at the shooting have not been made available.

The U.S. Department of Justice confirmed it also has opened an investigation to determine if Blake's civil rights were violated during his encounter with police. Authorities said the FBI will lead that probe. The Justice Department said the investigation will run parallel with the one conducted by the state, and information will be shared between the two to the extent permissible under law.