Accessibility links
Fact-Checking 6 Claims Pence Made About Biden's Record In His RNC Speech Pence warned that a Biden administration would threaten American freedoms and crumble the nation's economy. In making that case, Pence deployed several inaccurate or questionable claims. 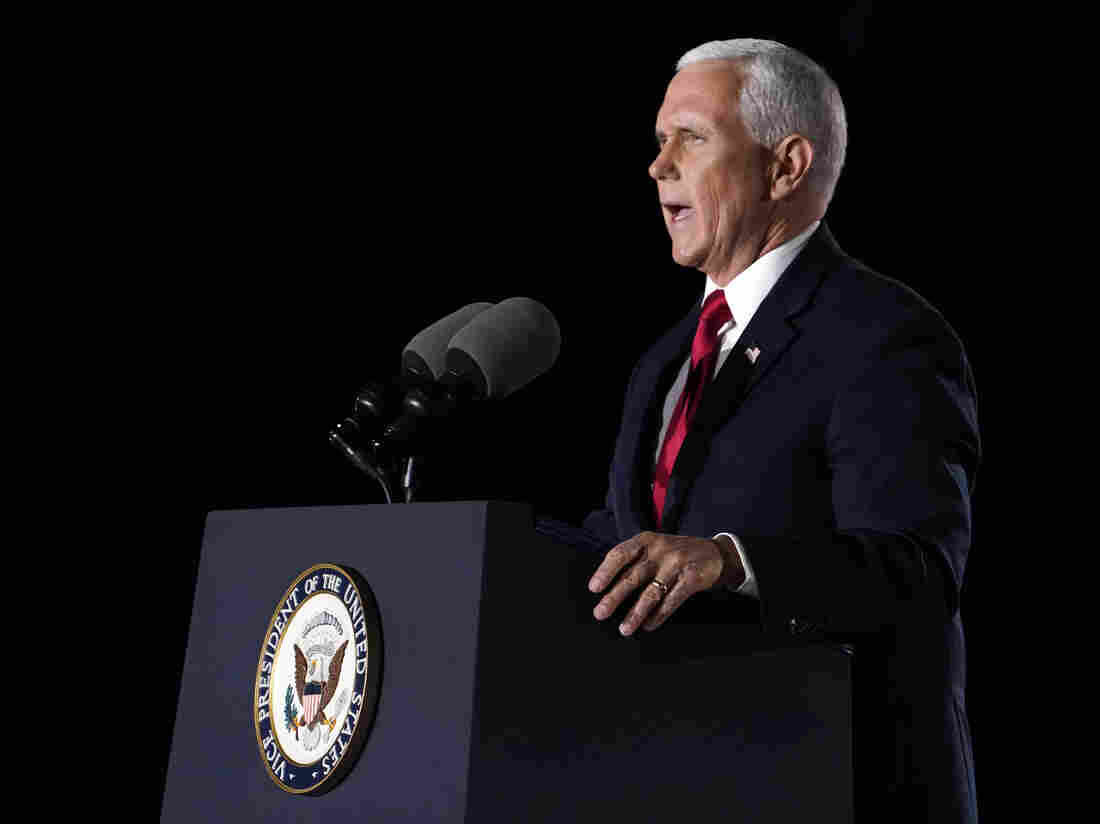 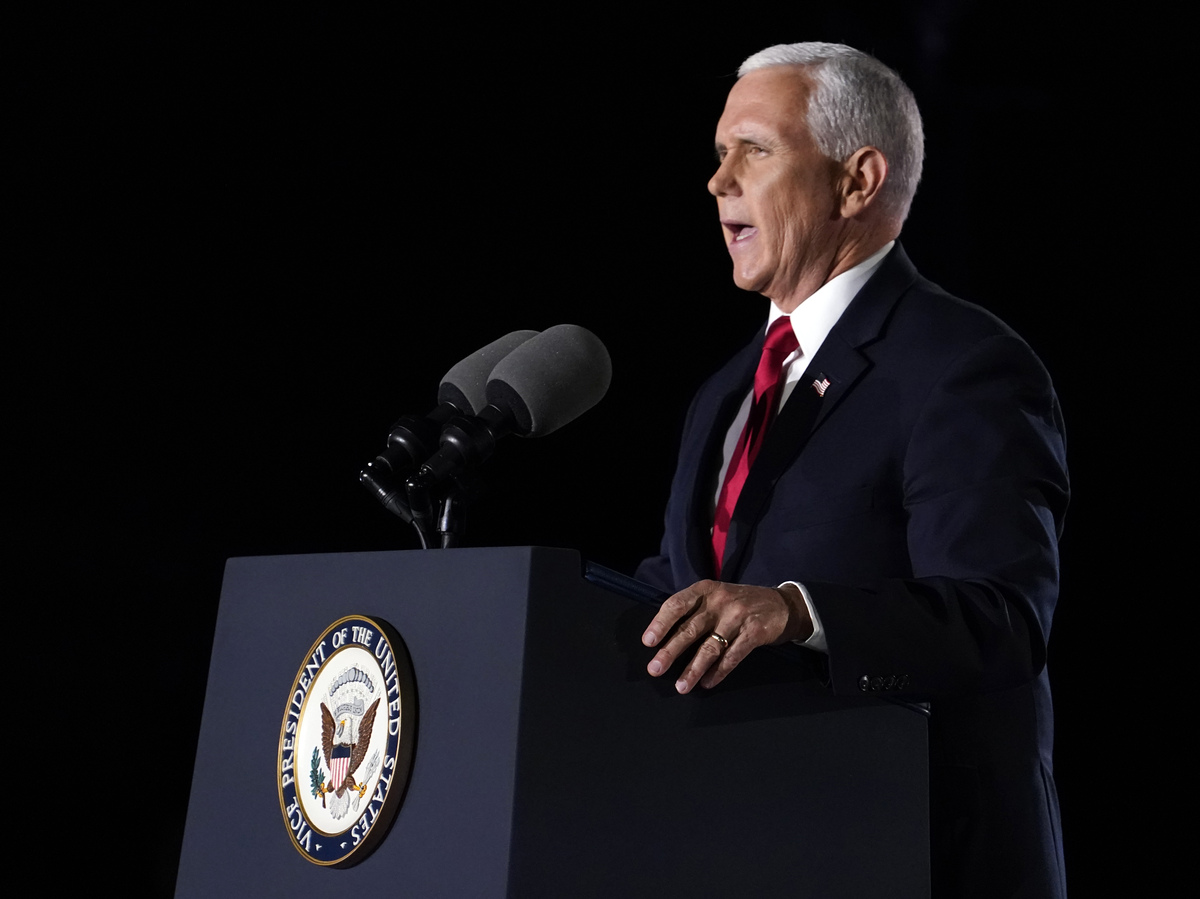 Vice President Pence speaks on the third day of the Republican National Convention at Fort McHenry National Monument and Historic Shrine in Baltimore.

Vice President Pence used his convention speech on Wednesday to rail against his predecessor, Joe Biden, and the woman Pence will face on the debate stage this fall, Sen. Kamala Harris.

With Fort McHenry in Baltimore as his backdrop, Pence warned that a Biden administration would threaten American freedoms and crumble the nation's economy. In making that case, Pence deployed several inaccurate or questionable claims. Here are a few of them:

Pence Warns Of An Unsafe America Under Biden: Takeaways From Day 3 Of The RNC

CLAIM: "Joe Biden, he supports taxpayer funding of abortion, right up to the moment of birth."

In Roe, the Supreme Court generally found that women have a right to an abortion and limited the ability of states to restrict access to the procedure, particularly in the earlier stages of pregnancy. The court has also said abortions should be allowed after 24 weeks if the mother's life or health are at risk.

According to the Centers for Disease Control and Prevention, only about 1% of abortions occur after 21 weeks of pregnancy.

During his political career, Biden, a practicing Catholic, has undergone a personal evolution on abortion rights. During the early primary cycle, some on the progressive left of his party questioned his longtime support for the Hyde Amendment, which bans taxpayer-supported health care programs from utilizing federal funds for abortions. (In June 2019, Biden reversed his position on the Hyde Amendment.)

As of 2019, public support for legal abortion remains at the highest level witnessed since the Pew Research Center began polling on the issue two decades ago. A majority of Americans (61%) say abortion should be legal in all or most cases. Still, in recent years, conservatives have been urging the Supreme Court to pick up the issue again and overturn Roe v. Wade. (In the most recent term, the court handed abortion-rights advocates a victory in a Louisiana case.)

CLAIM: "Joe Biden says that America is systemically racist and that law enforcement in America has, and I quote, 'an implicit bias' against minorities. And when asked whether he'd support cutting funding to law enforcement, Joe Biden replied, 'Yes, absolutely.' "

FACT CHECK: Biden has repeatedly denied interest in defunding the police, a position supported by the Black Lives Matter movement, and has instead proposed a $300 million cash infusion to support community policing and employing more social workers alongside police officers.

Pence's reference to Biden saying "yes, absolutely" came from a question about whether the former vice president agreed that some police funding could be redirected as part of police reform.

CLAIM: "Where this President achieved energy independence for the United States, Joe Biden would abolish fossil fuels, end fracking and impose a regime of climate change regulations that would drastically increase the cost of living for working families."

FACT CHECK: Though America is now a net exporter of petroleum, it still imports crude oil from other countries, so it's really not accurate to say the country has "achieved energy independence."

And while Biden wants to take on climate change and move the U.S. toward clean energy and away from fossil fuels, he has not — to the consternation of many progressives — called for an end to fracking. Instead, he wants a ban on new oil and gas drilling permits on public lands.

CLAIM: "History records Joe Biden even opposed the operation that took down Osama bin Laden. It's no wonder Bob Gates, secretary of defense under the Obama-Biden administration, said Joe Biden has been, and I quote, 'wrong on nearly every major foreign policy and national security issue over the past four decades.' "

FACT CHECK: In the months after the raid, Biden talked about how he advised President Obama to await further confirmation that bin Laden was actually in the compound in Pakistan where the terrorist leader was killed before moving forward.

As the months went on, Biden added the story of a private meeting with Obama in which he advised the president to follow his instincts, knowing Obama was leaning toward green-lighting the mission.

Memoirs by Robert Gates, the secretary of defense cited by Pence; Leon Panetta, who was the CIA director at the time; and Secretary of State Hillary Clinton also recount how Biden was one of the initial skeptics of the raid.

The statement that Pence cites from Gates, saying Biden has been wrong on major foreign policy questions, comes from his memoir. Gates was asked about it in an interview last year and said he stands by it.

FACT CHECK: There's a lot to pull apart in this sentence.

Biden's immigration plan supports accepting more refugees into the country, setting the cap at 125,000 annually. The current cap is 18,000. The plan also calls for bolstering border security by investing in new technology and improving collaboration with Mexico and Canada.

Biden would roll back Trump's crackdown on asylum claims, including ending the practice of limiting the daily number of claims that has resulted in many migrants waiting for days at the border to claim asylum.

On "free health care," Biden has said people who came to the country illegally should have access to emergency care, which is already mandated by federal law. Under Biden's health care plan, he has said they could buy into a public option, but it would not be subsidized by the taxpayer.

On "sanctuary cities," in a plan outlining his agenda for the Latino community, the campaign says Biden would "limit" the use programs that force local law enforcement to assist federal immigration authorities in immigration enforcement. So-called sanctuary cities limit this kind of cooperation with federal agencies like Immigration and Customs Enforcement.

FACT CHECK: Joe Biden has proposed raising the corporate tax rate from its current rate of 21% to 28% — which would still be lower than it was in 2016. Biden also wants to impose higher income and payroll taxes on people making more than $400,000, and he would tax millionaires' dividends and capital gains at the same rate as ordinary income.

According to the nonpartisan Tax Policy Center, more than 80% of Biden's proposed tax increase would fall on the richest 5% of taxpayers. Biden's plan would raise an estimated $4 trillion over the next decade.