Accessibility links
Portland Protests Declared Riot But Is This Rooted In Racism? The city has seen nightly protests for about three months. And police have declared riots or unlawful assemblies about half the time. But some argue the meaning of riot is too vague to be useful.

Listen · 3:40 3:40
Police Declare Portland Protests A Riot But This Definition Could Be Rooted In Racism 3:40 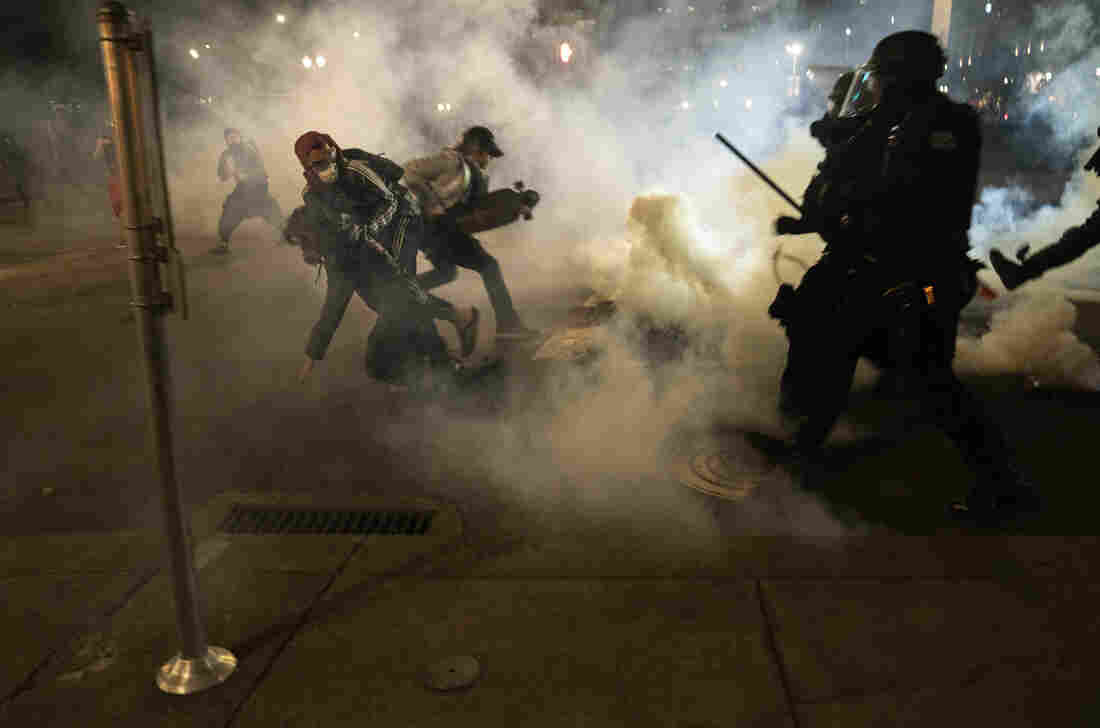 Protesters scramble to get away from approaching police firing tear gas and impact munitions to disperse protesters in downtown Portland during 4th of July demonstrations against systemic racism and police violence. Jonathan Levinson/OPB hide caption 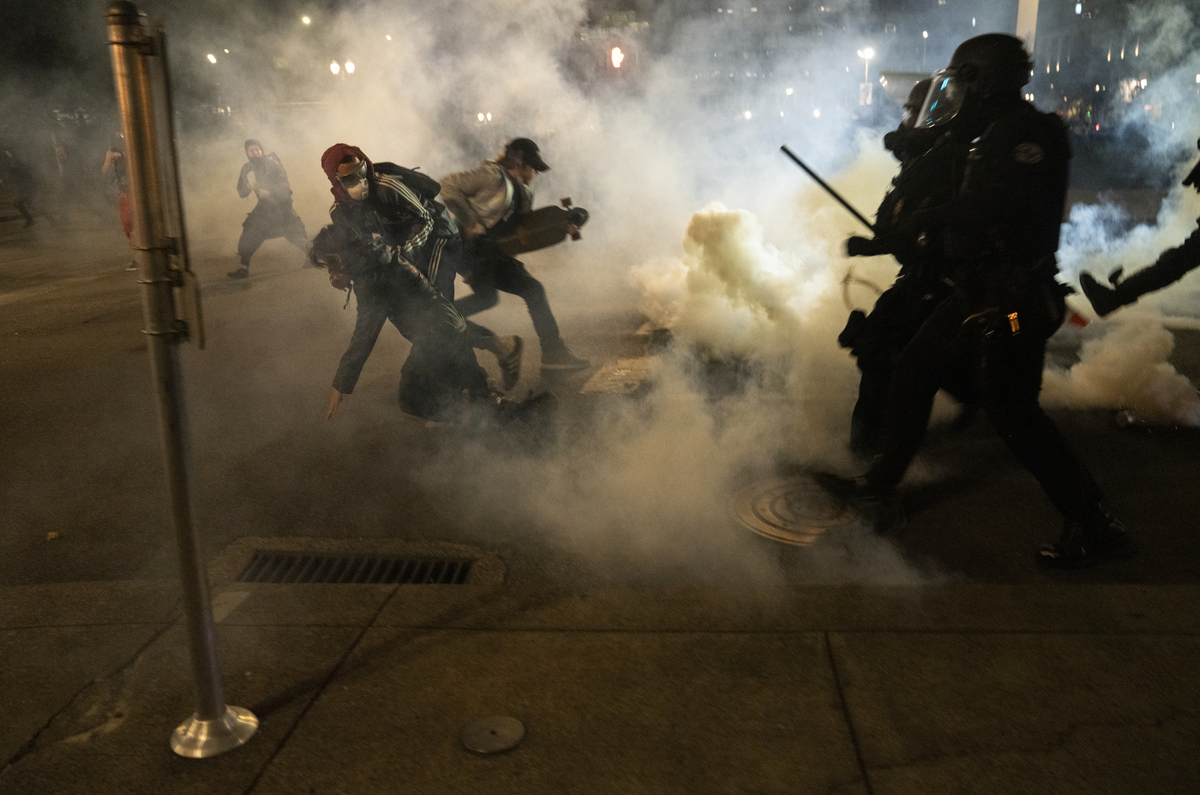 Protesters scramble to get away from approaching police firing tear gas and impact munitions to disperse protesters in downtown Portland during 4th of July demonstrations against systemic racism and police violence.

On a Saturday night in mid-August, the 79th consecutive day of protests in Portland, Ore., a couple hundred demonstrators gathered in Portland's Laurelhurst Park before marching to the Penumbra Kelly Building, a property used by both the city police and Multnomah County Sheriff's office.

As the group marched less than a mile through residential neighborhoods, they chanted slogans such as "No cops! No prisons! Total abolition!" When they arrived at the police building, protesters also played music, and yelled at the police who were positioned in their cars about 100 ft away, in the building's parking lot.

Nightly protests passed their 90th day this week. Over the course of nearly three months, crowd sizes have at times exceeded 10,000 people and on other occasions been fewer than 100. Between May 29 and Aug. 27, the Portland Police Bureau declared 23 riots and 22 unlawful assemblies (that doesn't include nights that started as unlawful assemblies and were later declared riots). But the laws governing those declarations are vague and have roots in Oregon's deeply racist past.

Oregon began as a white only state. While it banned slavery at its founding, the state adopted strict Black exclusionary laws which had been in place in the territory for decades. The law banned Black people from living in the state or owning property.

On that mid-August night, in addition to yelling at police, a couple of protesters spray painted the building while others threw water bottles – protesters' weapon of choice from the start. Police said rocks were also thrown.

After three hours, a booming announcement came from the bureau's long range acoustic device, or LRAD, a speaker that can broadcast messages at a louder than normal volume.

"This is the Portland Police Bureau. We're declaring this a riot," the by-now-familiar announcement came. "You need to leave the area to the west. If you do not leave the area you may be subject to use of force to include crowd control munitions, pepper spray or tear gas."

Unfazed, protesters lined up with homemade shields and umbrellas to protect against impact munitions and tear gas. A line of officers in riot gear bull rushed straight into the group, while someone played the "Imperial March" on a loudspeaker. Video from the clash shows a few moments, as police and protesters were engaged in hand to hand combat, the police grabbing at the protesters' shields and swinging their batons.

Davis said, before dispersing the crowd, officers provide warnings and give protesters time to leave. But that definition of a riot is subjective and the dispersal inevitably affects hundreds of non-violent protesters.

"Ideally, those engaged in the event would follow the lawful orders given and peacefully leave and no force would be necessary during a dispersal."

For Some Arrested At Portland Protests, Release Is Conditional On Not Attending More

On May 29, the first night of mass protests in Portland, Ore., police declared a riot after thousands of people poured into downtown, started a small fire in the ground floor of the Multnomah County Justice Center and looting broke out.

They declared a second riot the following night. On both nights, officers used tear gas to disperse crowds. But then for nearly a month, police continued to use teargas without declaring a riot.

Alarmed by the frequency and amount of tear gas being used, state lawmakers passed legislation during an emergency session in June to address racial justice and policing. They hoped to raise the bar on tear gas use by making it only acceptable to use during a declared riot. 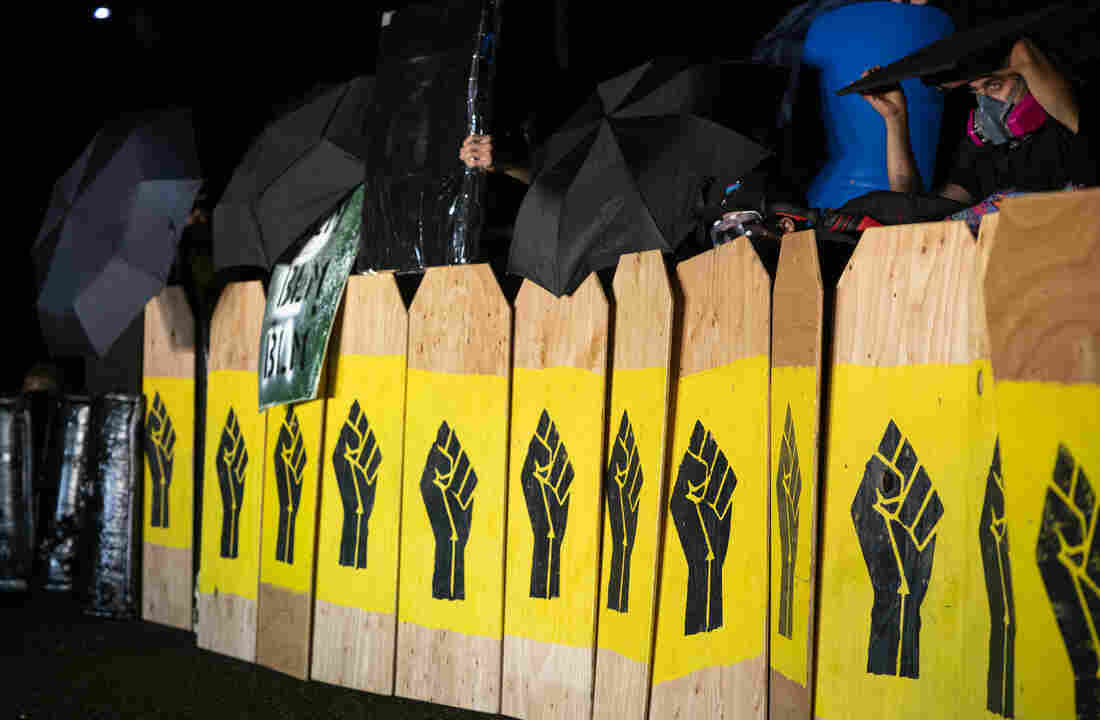 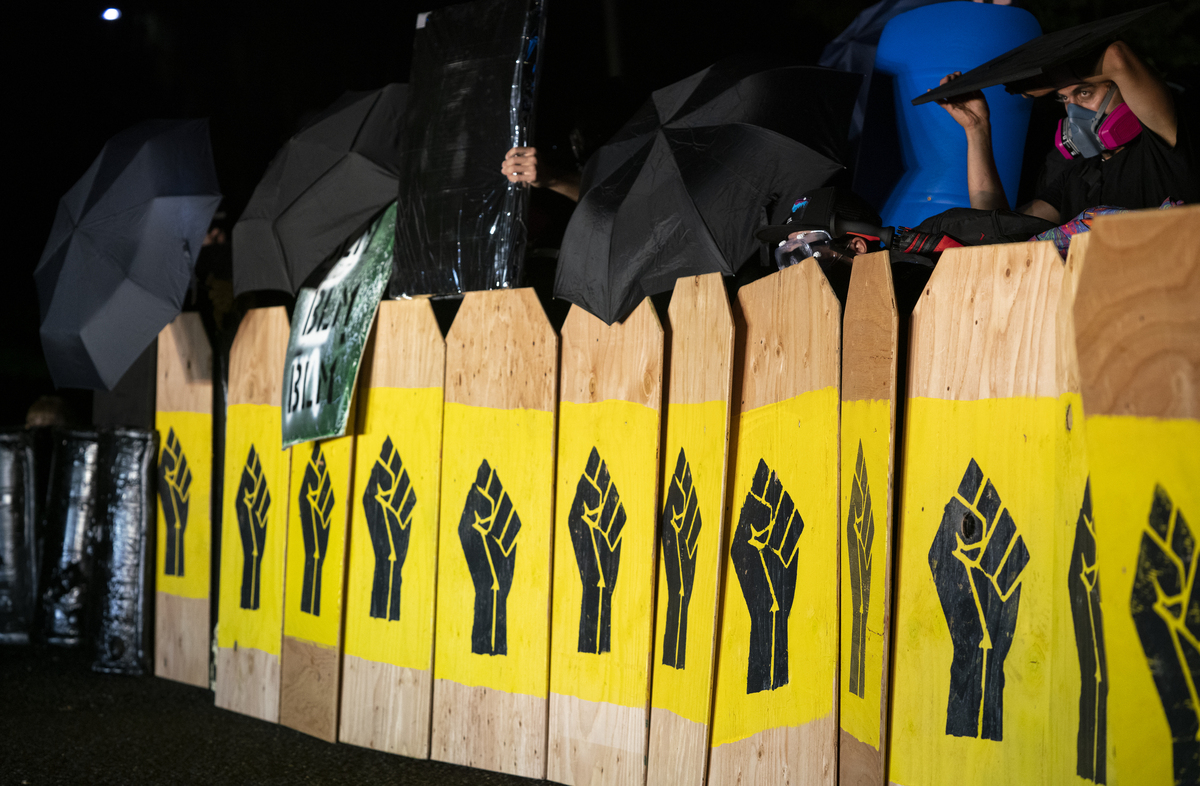 On Day 79 of protests against systemic racism and police violence demonstrators went to Penumbra Kelly building in East Portland.

"We were hearing that people were getting caught in these tear gas deployments," said State Rep. Janelle Bynum, one of the bill sponsors. "And they felt like they didn't have any warning. They felt they were trapped."

The bill was signed into law on June 30. That evening, police declared a riot for the first time in a month and blanketed a North Portland neighborhood in tear gas. Between June 30 and Aug. 27, police have declared 20 riots.

"What I didn't expect was for the bar to be so low," said Bynum, who said the history of these laws are also relevant to the moment.

"A lot of the riot and crowd control philosophy and statute was developed around the '60s and '70s when protests around some of the very same things ... rights for Black people. ... were taking place in the state and particularly in Portland," Bynum said.

On some nights, police have declared unlawful assemblies within minutes of protesters arriving.

"But then the riot part? Who knows," said Folasade Ogunfiditimi, a protester who's been coming out since the end of May. "Like a half-empty water bottle maybe? Somebody could walk on their property and they declare it a riot. It could be anything or nothing."

Ogunfiditimi said she's been protesting because Black lives matter and policing, with its history as "slave catchers," is a fundamentally corrupt institution.

And she said the way the police are treating protesters proves the demonstrators' point. She said on most nights they use excessive force and, just as the police spotlights got even brighter, she pointed and said it's like psychological warfare.

"They're very finicky, very emotional," she said. "They show in their actions they don't care what they do."