Accessibility links
Amid Peaceful Protest, Crowd Surrounds Rand Paul After Trump Speech Walking near the senator from Kentucky and his wife, protesters spoke out about the police killing of Breonna Taylor in Louisville. The situation escalated as police attempted to push them back. 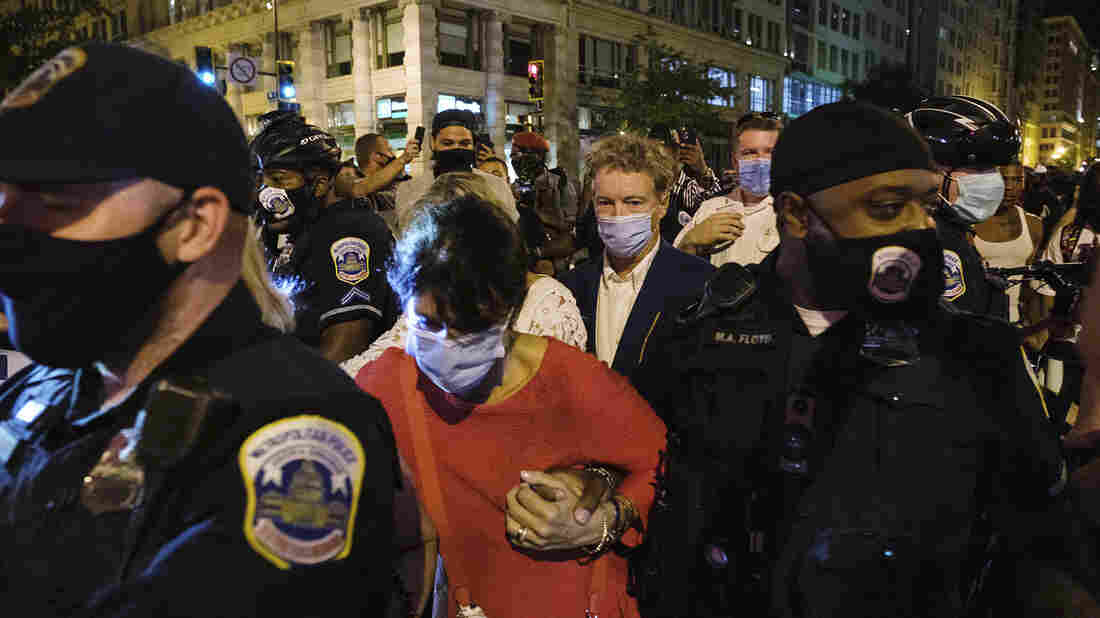 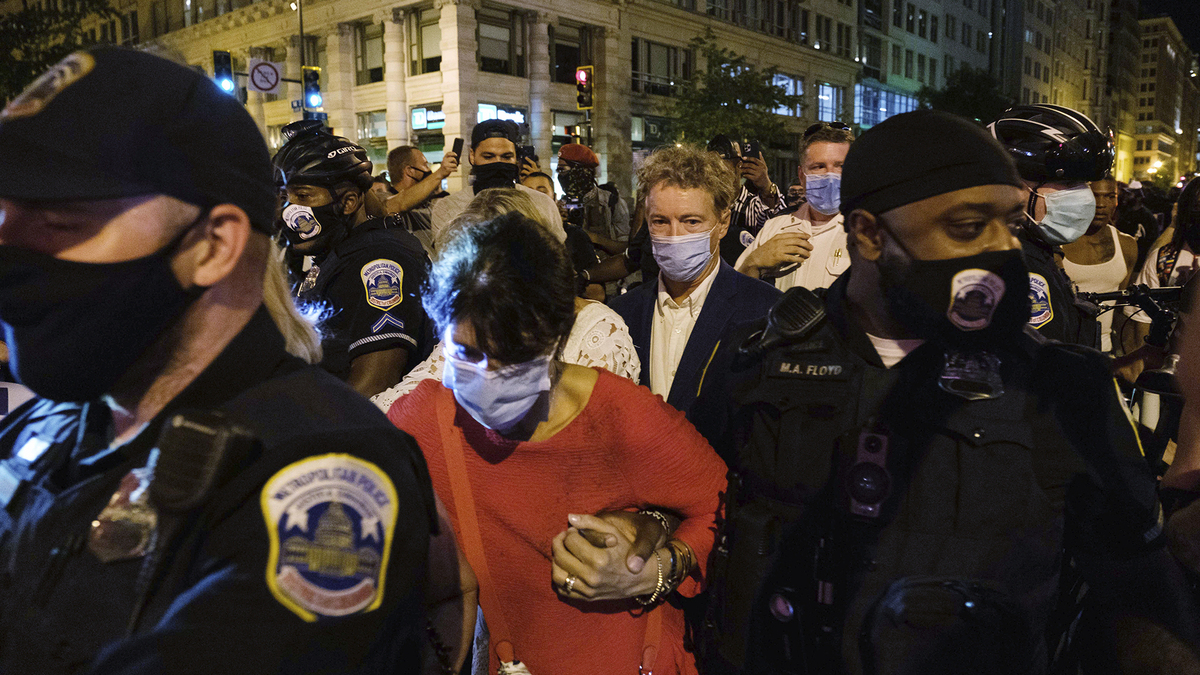 As Republican Sen. Rand Paul left the White House on Thursday night, he was surrounded by a group of protesters and was escorted by police to a nearby hotel.

The scene was captured on video by The Washington Post. The footage shows officers using their patrol bicycles to create a barrier between Paul, his wife and the crowd as the protesters walked around them and shouted "no justice, no peace," "justice for Breonna Taylor" and "you need to respond."

Paul represents Kentucky, where police officers killed emergency medical technician Breonna Taylor, 26, in her Louisville home after they executed a no-knock warrant at the wrong apartment.

Activists across the country are frustrated with the handling of the investigation by Kentucky's attorney general, Daniel Cameron, who spoke earlier this week at the Republican National Convention. No charges have been filed against the officers in Louisville.

Hundreds of peaceful protesters gathered Thursday night outside the White House as President Trump accepted his party's nomination for the presidency on the South Lawn of the White House. They held signs, chanted, marched and blew horns occasionally audible on the White House lawn.

The overall protest was peaceful, according to what NPR reporters witnessed Thursday night outside the White House.

For months, demonstrators have congregated around the White House to protest racial injustice and police brutality following the deaths of Taylor and George Floyd, a Black man in Minneapolis, at the hands of white officers. On Friday, thousands gathered on the National Mall for a march calling for racial justice on the anniversary of the historic 1963 March on Washington led by the Rev. Martin Luther King Jr.

On Thursday night, the Post reported that police sprayed "chemical irritants" to push back the protesters surrounding Paul. At one point, an officer walking next to his bike pushed back a protester, and the situation escalated as the protester returned the push and sent the officer falling backward into Paul.

In a tweet, Paul thanked the police for "literally saving our lives from a crazed mob." The video does not show protesters physically touching the Pauls. In an interview Friday morning on Fox News, Paul used the incident to bolster a political argument that Trump made Thursday night — that electing the Democratic ticket would pave the way for chaos in American cities. Paul is calling for an FBI investigation into the people who were in the crowd.

This is not the first time an attack on Paul involved a police response. In 2017, Paul was assaulted while working on his lawn by a neighbor in Bowling Green, Ky. The senator was seriously injured with six broken ribs. The attack resulted from a dispute over landscaping on their property line, and Paul was awarded more than $500,000 in damages.

Often at odds with his party's leadership, Paul has long advocated for criminal justice reform legislation in the Senate. In June, he introduced a Senate bill to ban no-knock warrants called the "Justice for Breonna Taylor Act."

The law would ban federal law enforcement officers from carrying out warrants without announcing their "authority and purpose." It would also prevent local and state agencies that receive Department of Justice funding from using no-knock warrants. Those that don't comply would risk their funding.

Police reform legislation on Capitol Hill has stalled as both parties accuse each other of playing politics with the issue ahead of the November election.