Accessibility links
AG William Barr Has Been Speaking About The Election Frequently The attorney general didn't appear at the Republican National Convention but he has been speaking out frequently in support of Republicans and against Democrats. Critics say that's not his job. 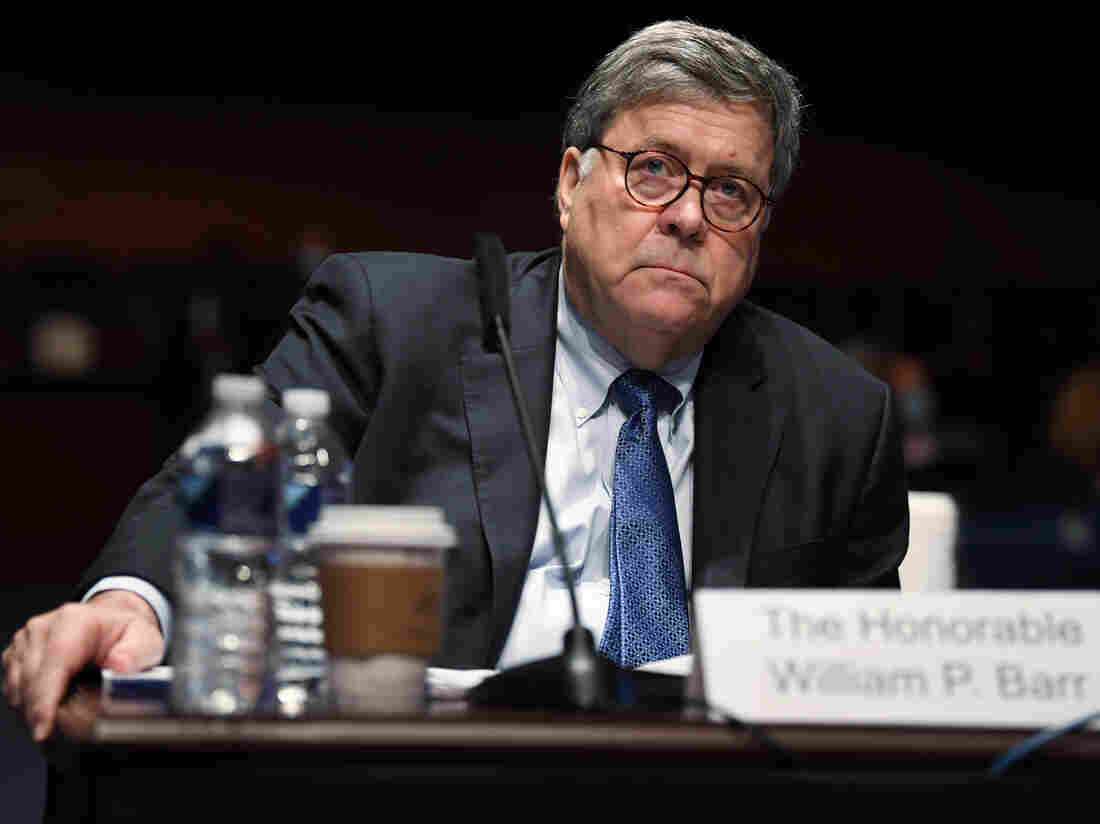 Attorney General William Barr, seen here before the House Oversight Committee, has been making a political case for the president even as he serves in the administration. Matt McClain/AP hide caption 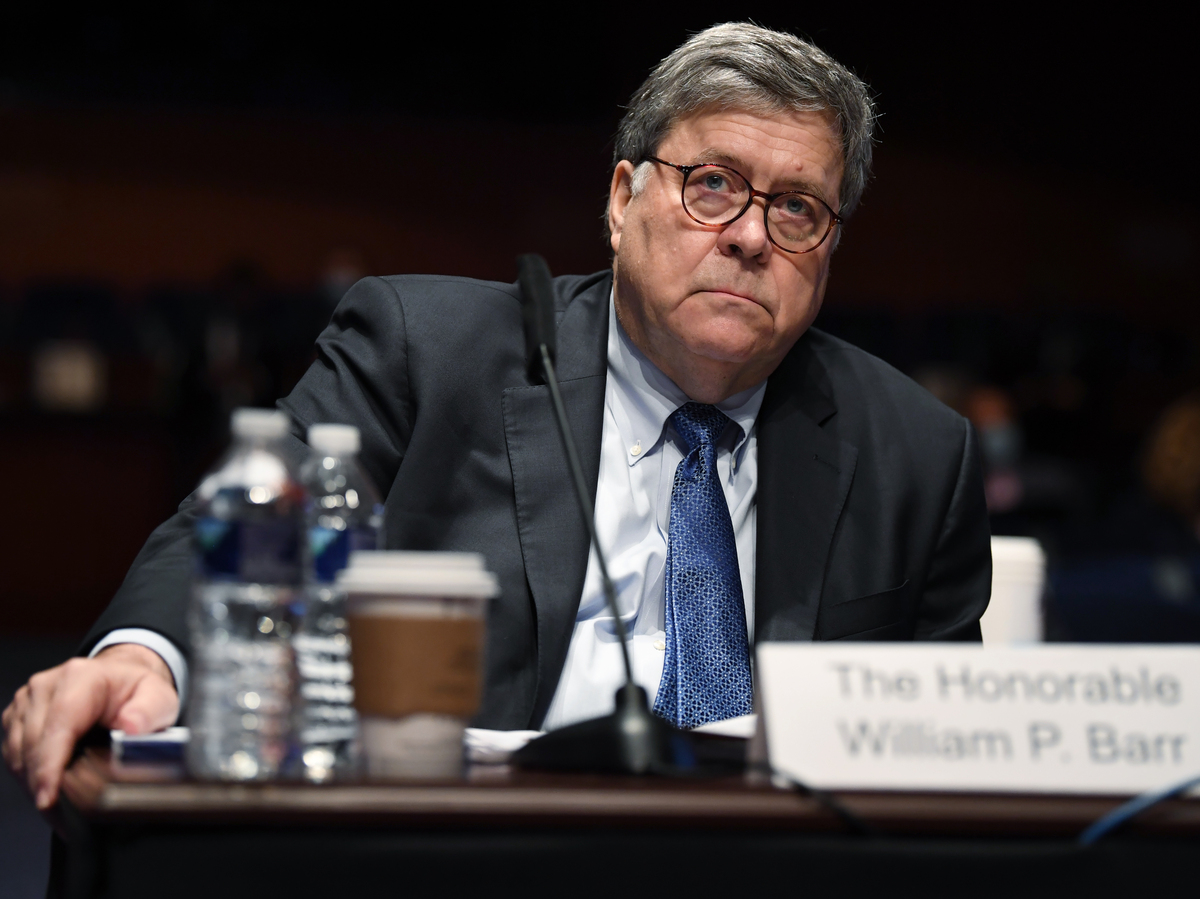 Attorney General William Barr, seen here before the House Oversight Committee, has been making a political case for the president even as he serves in the administration.

Attorney General William Barr did not speak at the Republican National Convention this week, but that doesn't mean he's been sitting silently on the sidelines during this election season.

Barr has done more than a half-dozen TV interviews with national broadcasters since early June in which he has addressed hot-button issues and political fights central to the 2020 campaign.

He's accused the media of being an arm of the Democratic Party and lying to the public; he's called the Russia investigation a "doomsday scenario" and accused the Obama administration of using federal law enforcement to go after Trump; and he's echoed his boss' unfounded allegations against mail-in voting.

But perhaps most forcefully, Barr has launched partisan political attacks against Democrats. He's accused them of being hell-bent on total victory, tearing down the American system and running people's lives.

Barr added: "They view their political opponents as evil because we stand in the way of their progressive utopia that they're trying to reach."

A few days later in another interview on Fox, Barr had this to say about racism in the middle of a campaign in which that very issue has been front and center: "People talk about implicit racism or systemic racism, the racism in this country. Look no further than our public education system. That's a racist system, maintained by the Democratic Party and the teachers' union."

It is highly unusual for an attorney general to bluntly attack political opponents, particularly during a presidential campaign. Traditionally, they seek to avoid even the perception of trying to tip the scales in their boss' favor.

Legal experts and Justice Department veterans say it is not the attorney general's job to engage in partisan politics. And they say with these sorts of statements, Barr is doing exactly that.

"He has been operating as a political operative and a campaign aide to the president rather than as attorney general of the United States," said Fred Wertheimer, the founder of the left-leaning watchdog group Democracy 21. "Barr is free to have any views he wants but he's not free to exercise those views as attorney general."

The Justice Department's mission, Wertheimer noted, is to ensure the fair and impartial administration of justice.

"Now, there's no way you can listen to what he says and watch what he does and conclude he is leading the American people to believe he's going to do a fair and impartial administration of justice for all Americans," Wertheimer said.

Critics accuse Trump and Republicans of obliterating the norms once intended to keep partisan appeals separate from their official roles. Much of this year's Republican convention took place at the White House, in a first, and Secretary of State Mike Pompeo, the nation's top diplomat, addressed it from an official overseas trip.

In Barr's case, administration opponents say he's doing more than using his megaphone to attack Trump's opponents and help boost the president's reelection efforts — they also say he's using the levers of his office's power to benefit Trump as well.

The prime example they point to is the Justice Department's investigation into the origins of the Russia probe.

Barr has long been a fierce critic of the Russia investigation, calling what happened to Trump "one of the greatest travesties in American history." Last year, Barr appointed a veteran federal prosecutor, U.S. Attorney for Connecticut John Durham, to lead an investigation into the origins of the Russia probe.

Since then, Barr has made repeated suggestions that what Durham has dug up is surprising and troubling, which has spurred Democrats and some DOJ veterans to accuse Barr of violating department policy by discussing an ongoing criminal investigation.

"Generally we do not comment on the existence of investigations, and we never comment on the substance of what we are finding," said Donald Ayer, who served as deputy attorney general in the George H.W. Bush administration. "So he's been violating that rule itself categorically."

Then late last month, critics say Barr appeared to shrug off another department policy meant to help the department steer clear of potentially influencing an election.

When asked at a hearing before the House Judiciary Committee whether he would commit to not releasing any report from Durham before the election, Barr said "no."

It is longstanding department policy to avoid taking any action in the run-up to an election that could influence the outcome. Barr told lawmakers he's familiar with the policy, but that he doesn't believe Durham's findings, which could be issued as a public report, are covered by it.

Barr has said, including in an interview with NPR, that no one under investigation by Durham is running for president, suggesting that the probe doesn't technically fall under the department's election policy.

"I'm committed to having the American people have a free choice in this election between the candidates and I don't want the Department of Justice to be interfering in that," he told NPR.

Despite Barr's assurances, his critics are not assuaged.

"There's a whole series of things that Barr has done that fairly viewed are either overt political actions or overt political advocacy, which has no appropriate place and no logical place other than to advance the president's reelection," Ayer said.