Accessibility links
Chris Murphy Says He Still Sees Hope For Progress Around Gun Laws And Racial Justice In his new book, the Connecticut Democrat outlines the history of the Second Amendment and gun violence. While solutions are big and comprehensive, Murphy says the U.S. is poised to turn a corner. 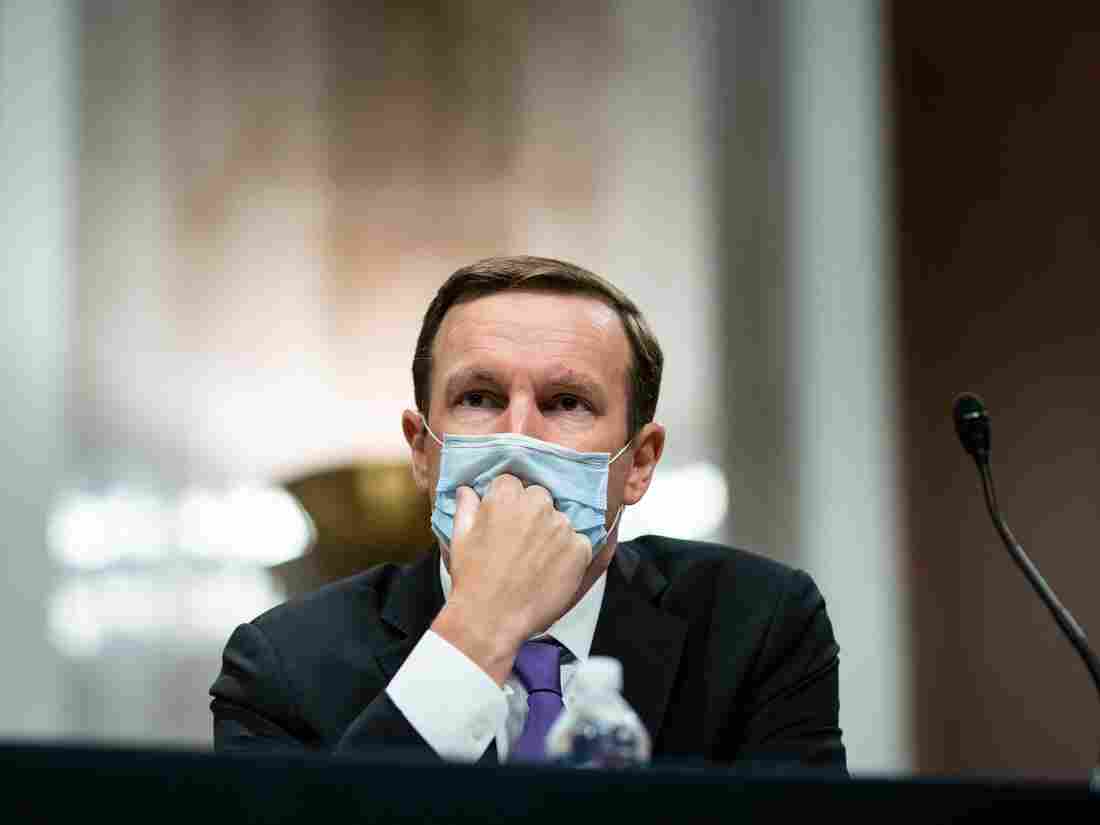 In his new book, Sen. Chris Murphy, D-Conn., outlines the history of the Second Amendment and why gun violence is as bad as it is today. Above, Murphy listens during during a Senate hearing on June 30, 2020. Al Drago/POOL/AFP via Getty Images hide caption 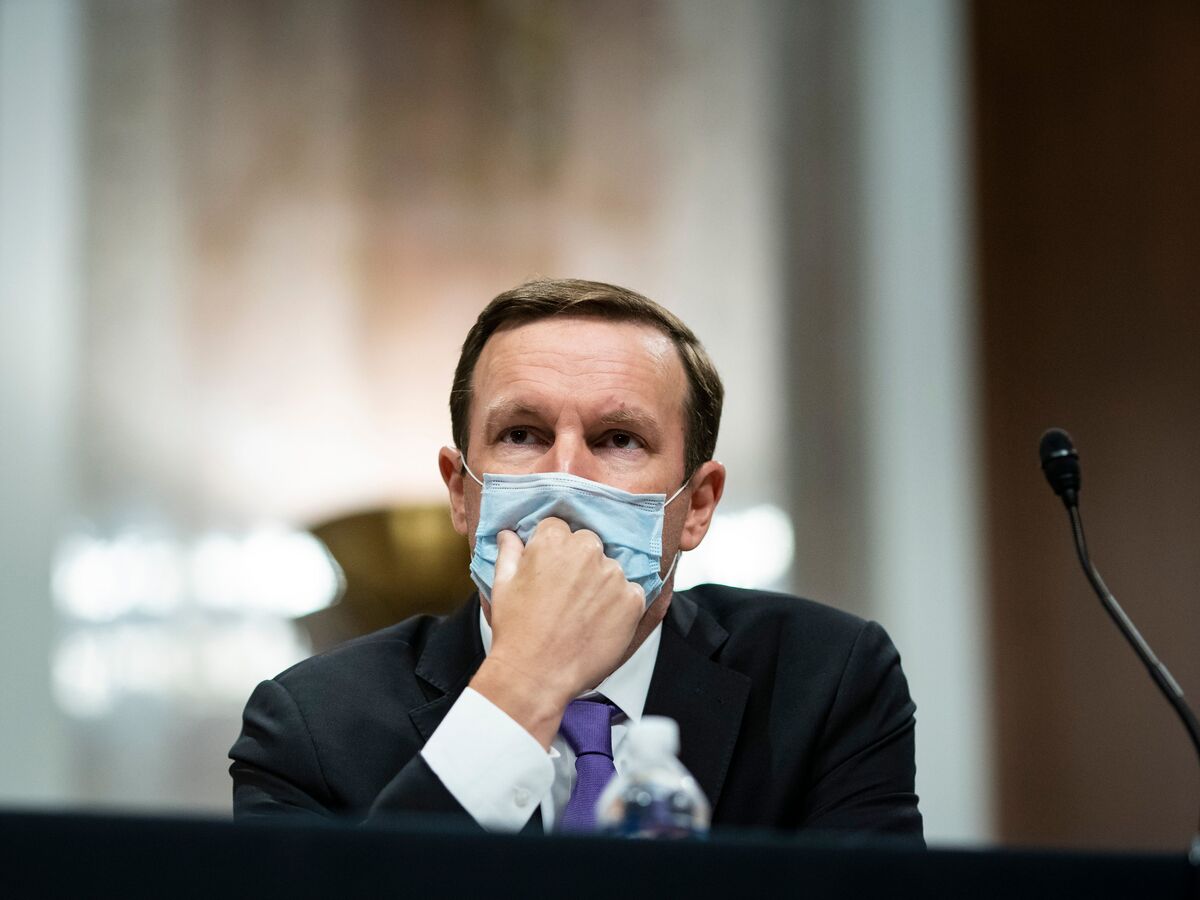 In his new book, Sen. Chris Murphy, D-Conn., outlines the history of the Second Amendment and why gun violence is as bad as it is today. Above, Murphy listens during during a Senate hearing on June 30, 2020.

Protests against police brutality and gun violence continue in Kenosha, Wis., following the police shooting of Jacob Blake. Meanwhile, a 17-year-old is facing murder charges for allegedly shooting and killing two protesters in the city on Tuesday night.

On Saturday, a man in Portland was fatally shot as a pro-Trump caravan traveled through the city, clashing with counter protesters.

These events have revived many debates, including about the Second Amendment and the pervasiveness of gun ownership and gun violence in the United States.

Senator Chris Murphy, a Democrat from Connecticut, has thought a lot about these issues. In his new book, The Violence Inside Us: A Brief History Of An Ongoing American Tragedy, Murphy outlines the history of the Second Amendment and why gun violence is as bad as it is today in the U.S.

He provides stories of some of the people behind the numbers, and explains the shift in his own thinking on these issues after the mass shooting at Sandy Hook Elementary School in 2012.

"I feel like if I don't get a bill done to address gun violence in this country by the time that I hang up my spikes, then I've failed," Murphy says. "I've just fundamentally failed as a legislator."

On the events happening in Kenosha, Wis.

It's time that this country has a reckoning with a centuries-long history of racial violence that has been used to subjugate people of color and keep in place a racial caste system that we can't tolerate any longer. ...

What we know is that this kind of violence has been happening routinely on our streets for decades. And this vigilante justice that we are also seeing – this young man who took a very powerful rifle into a crowd and ended up with two people being killed – that's also part of our history as well.

Vigilante justice has deep roots in American history. I think it's also incumbent upon us to take a look at our firearms laws to understand how those kind of weapons get into the hands of young men like that so easily.

On his personal connection to gun reform

I had lots of issues that I worked really hard on. I was a prodigious state legislator and congressman. I rewrote the nation's affordable housing laws. I passed a bill in Connecticut investing millions in stem cell research. But what I found was that that was different than having an emotional connection to an issue. I was intellectually connected to issues, but I didn't wake up every day with that sort of core mission to drive me.

And that all did change in 2012. I still work on all those other issues. But now I feel like if I don't get a bill done to address gun violence in this country by the time that I hang up my spikes, then I've failed. I've just fundamentally failed as a legislator. And that is a difference between being intellectually connected to issues and being emotionally connected to issues.

On what Democrats are getting wrong about gun reform, and how both sides of the issue can compromise

I think Democrats should make clear that we are not seeking to take away everyone's guns, nor do we think the Constitution allows for that.

But at the same time, as I explain in the book, there was pretty heavy gun regulation at the time of the writing of the Constitution. So our Founding Fathers likely believe there was a common law right for everybody to own a gun, but they also thought that that right should be pretty tightly restricted. ...

I also tell the story in the book of a conversation that I got in – one I get into regularly – with a voter in Connecticut in which, you know, he was so angry at me. He sought me out at the end of an event because he thought that I was trying to take away his guns. And I started to talk to him about background checks. And immediately, he said, "Well I'm for those. I think that background checks are important. I went through those when I sold my gun."

And so when I think we have a real conversation about what our agenda is rather than the agenda that the NRA tells their members we are pursuing, the conversation becomes a lot easier.

It's not just about gun laws. It is also about a long history of violence as a mechanism to keep a racial caste system in line. And in that sense, maybe our task does look overwhelming.

But since I wrote the book, we have seen the emergence of the Black Lives Matter movement that should give us all new hope that we can have more productive conversations around a broader set of issues beyond gun laws. So, yes, the solutions to violence in America are big and comprehensive. But I don't know. I see so many signs from 2018 to this summer that we have the potential to turn the corner. And I just hope this book is a primer for folks who want to be educated activists as part of those movements.

Gemma Watters and Tinbete Ermyas produced and edited this interview for broadcast.