Accessibility links
Republicans Worry Trump's Mail-In Voting Language Could Do Harm Trump's supporters don't trust voting by mail, said one local Wisconsin GOP chair. "And one of the reasons they don't trust it," he said, "is the president's previous tweets and comments about it." 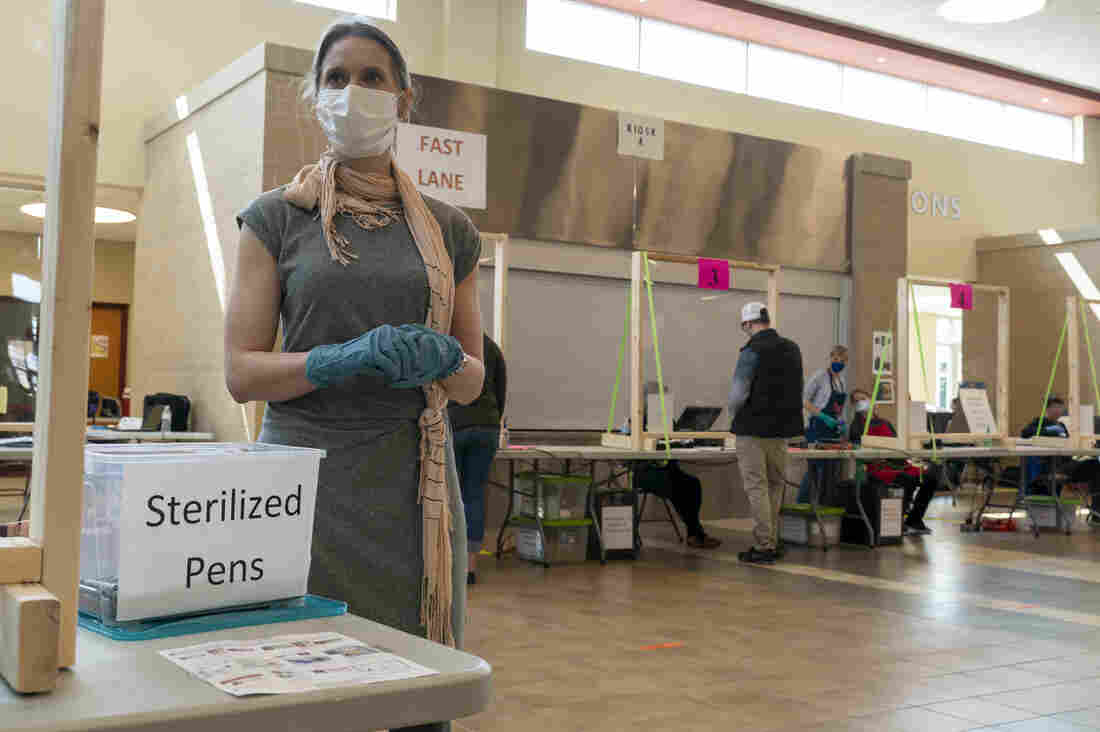 A poll worker in Sun Prairie, Wis., is seen during the state's April 7 primary. A record number of Wisconsin voters are expected to vote by mail this fall, but polls indicate Republicans are far more likely to vote in person, which has some GOP officials worried it could hurt the party's chances. Andy Manis/Getty Images hide caption 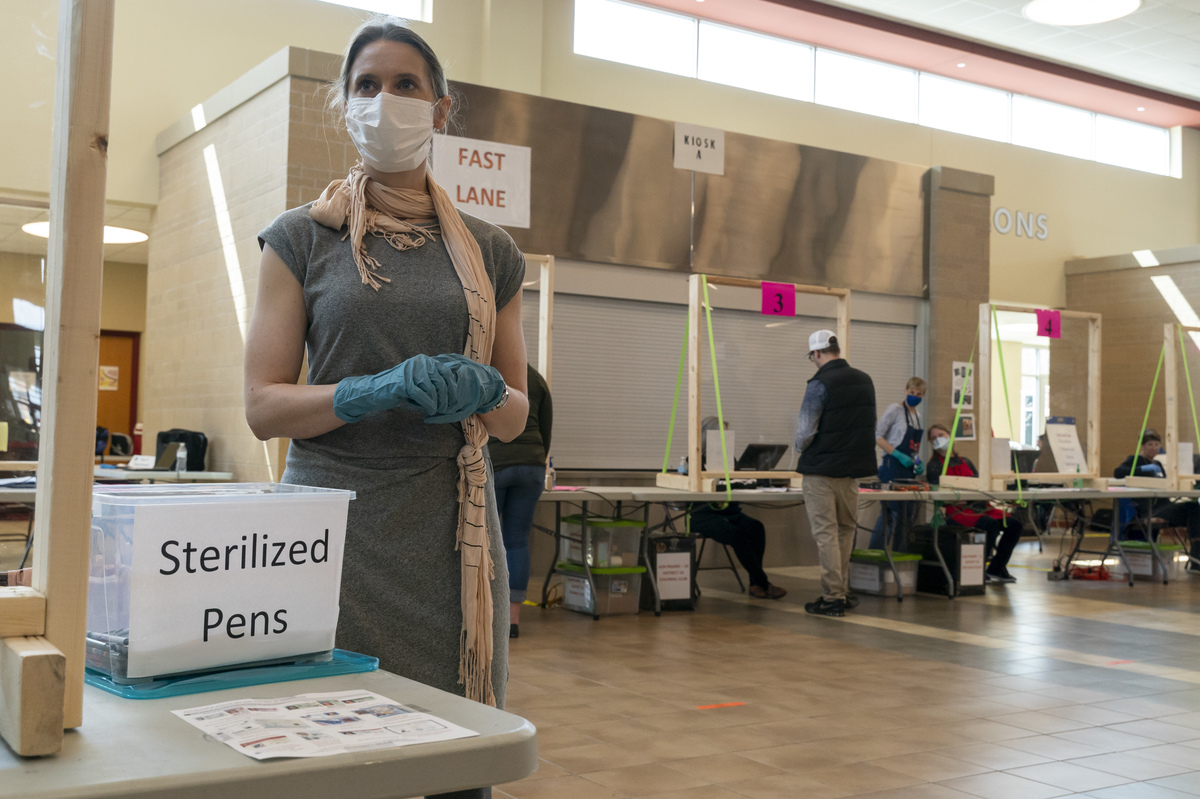 A poll worker in Sun Prairie, Wis., is seen during the state's April 7 primary. A record number of Wisconsin voters are expected to vote by mail this fall, but polls indicate Republicans are far more likely to vote in person, which has some GOP officials worried it could hurt the party's chances.

President Trump's campaign to discourage the use of mail-in voting this fall is raising concerns among Republicans, particularly in the key swing state of Wisconsin, that his efforts could hinder their party on election night.

Last week, Trump called expanding mail-in voting during the coronavirus pandemic "the greatest scam in the history of politics" — although there's no evidence to back up his claim that it will lead to widespread voter fraud.

"I do sense the skepticism among a lot of Republican voters about the mail-in balloting thing," said Rohn Bishop, the GOP county chairman in Fond du Lac, north of Milwaukee. "They don't trust it, and one of the reasons they don't trust it is the president's previous tweets and comments about it."

The stakes are high in Wisconsin, which Trump won by a little more than 22,000 votes in 2016 and is key to any Electoral College path to his reelection.

And even as Trump ramped up his false claims about mail-in voting, during a recent stop in Wisconsin this month he encouraged supporters to vote either in person or absentee, like he recently did in another must-win state, Florida.

While Wisconsin has long had no-excuse absentee voting, there's a clear partisan divide in how voters plan to cast ballots this fall. In the most recent statewide poll from Marquette University Law School, 55% of Democrats said they planned to vote by mail, while only 15% of Republicans said they would.

Habit and not necessarily the president's words is one reason some voters still plan to vote in person.

"If it's OK to go to McDonald's and get your food during the pandemic through a drive-through, it's certainly OK to receive a piece of paper," said Benjamin Horvat of Racine, who plans to use curbside voting this fall. "Not a big deal."

Andrew Hitt, the chair of the state GOP, said he doesn't think the president's message will inhibit getting supporters in the state to vote by mail.

"We don't see any evidence," Hitt said, "that it's going to dissuade people who want to vote absentee to vote absentee." He emphasized that Trump's concerns about voting were with other states, not Wisconsin.

"We need to do all we can to make sure that our voters either vote absentee and are comfortable voting absentee," said Hitt, "and if they're not, then we need to make sure they understand that it is safe to go to the polls and vote."

Bishop, the Fond du Lac GOP chair, said that many of the claims about mail-in voting that he sees spreading on social media, including accusations that ballots for Republicans could be stolen by postal workers, are "conspiratorial hype."

"The system's pretty solid," Bishop said. "You have to sign the ballot; you need a witness; you can track your ballot. I know a lot of people like to confuse it and say, 'Well, look at California, where they mailed ballots to everyone.' While they do, if ballots just show up and they don't belong to anyone, they don't count them."

Bishop's defense of voting by mail has made him a target from some within his party.

"There's a radio talk show host that I've never heard of in Green Bay who spent the last two and a half weeks ... he seems to ridicule me a lot," said Bishop. "And he says I'm a RINO and not a real Republican simply because I feel this way about the absentee mail-in voting program."

Before the pandemic, most voters in Wisconsin typically cast ballots on Election Day, with fewer than 10% of ballots cast by mail.

During the state's chaotic presidential primary in April, at the height of lockdown orders nationwide, more than 6 in 10 voters statewide cast ballots by mail, a record for a Wisconsin election.

In the midst of that election, Republicans did convince a sizable number of voters to cast mail-in ballots. But it was the state's Democrats who decided to make voting by mail a priority for subsequent elections during the pandemic.

Bishop is concerned that Democrats are building a structural advantage and that if there is another flare-up of the virus or an early snowstorm on Election Day, some Republican voters may not turn out, while the Democrats would have mailed in their ballots.

Republicans are taking steps to encourage voting by mail. The state GOP has launched an educational campaign to teach voters how to request a ballot on their phone, while Republicans on the bipartisan state elections commission were part of a unanimous vote to send mail-in ballot request forms to 2.7 million registered voters.

"There's a lot of Trump people out there that are going to vote for President Trump that we don't know about," said Bob Spindell, one of the Republican election commissioners. "And this is really the only way that we could assure that all those people would get an absentee ballot."

Another practice Trump and other Republicans have criticized is having a third party collect completed ballots and return them, which they've derisively called "ballot harvesting."

"We will have something like that too," Spindell said, because the state's Democrats plan to collect ballots that way.