Accessibility links
After Laura, Learning How To Recover From A Hurricane During A Pandemic Normal protocols for hurricane evacuation, aid distribution and recovery have been upended by the threat of the coronavirus. 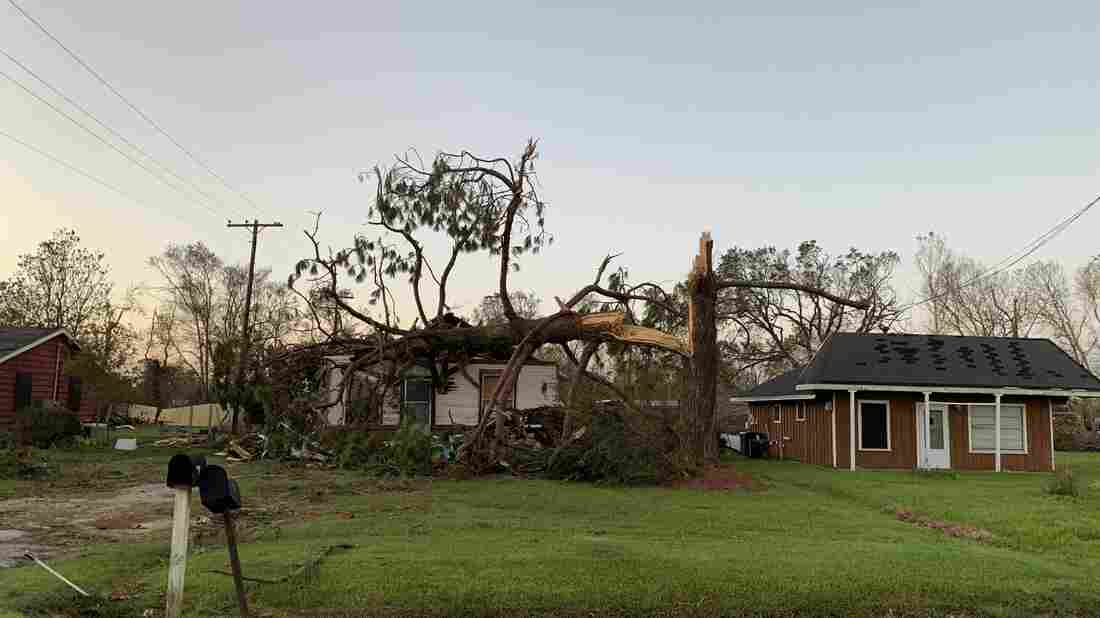 A home near Iowa, La., was crushed by a snapped tree after Hurricane Laura made landfall with 150 mph winds Thursday. The area is facing two disasters at once. Kirk Siegler/NPR hide caption 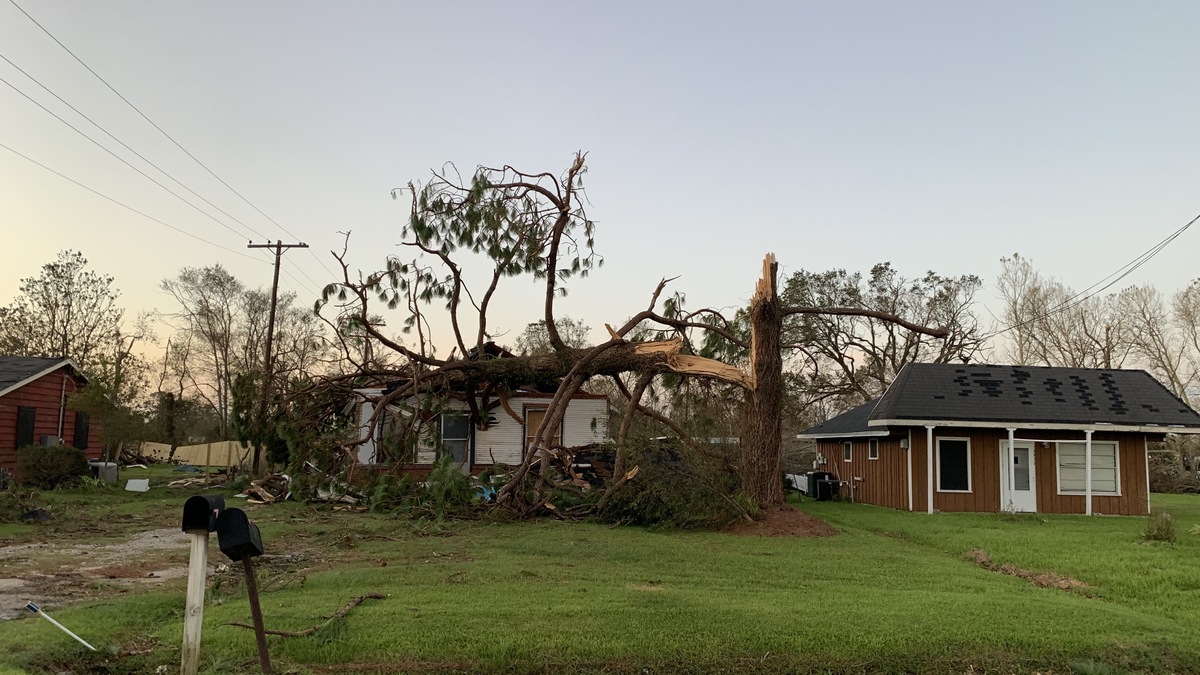 A home near Iowa, La., was crushed by a snapped tree after Hurricane Laura made landfall with 150 mph winds Thursday. The area is facing two disasters at once.

In Orange, Texas, just across the Sabine River from Louisiana, a line of cars hundreds deep snakes along a highway shoulder and into a parking lot. A local supermarket has set up an aid distribution center in the hot sun and humidity. Families are packed in their cars, waiting to get the basics: ice, water, a hot meal.

Hurricane Laura is the first major test of whether the Gulf Coast is prepared to handle two disasters at once. Coronavirus case numbers in Southwest Louisiana were already spiking at an alarming rate. Then a Category 4 hurricane came ashore.

While Laura spared Houston and New Orleans, more than 600,000 homes were in the path of the storm, which caused widespread power outages and disrupted the water system.

"It's definitely more stressful," says Tory Carter as she waits to pick up her supplies. She evacuated to Austin with her 5-year-old son and mother as the storm approached. Now she's come back to take stock of the damage and get back to her job. "It's rough staying safe when you don't have water at the moment or electricity, to try to keep everything clean," she says.

In the food line, volunteers wear face shields and ask people to keep their car windows rolled up.

"It's just kind of hard right now," says Trichee Abraham, who lost her job as a cashier recently, one of millions of Americans pushed to the brink by the financial crisis that accompanied the pandemic. Like many evacuees, she chose to ride out the storm in a hotel. She says she used up her savings to pay for the stay, and she has yet to receive any aid from the local, state or federal government.

A half-hour drive east into Louisiana, Interstate 10 is clogged with emergency vehicles and utility trucks. There are car accidents; debris and enormous downed trees block parts of the road. The city of Lake Charles, population 80,000, took a direct hit. Whole neighborhoods are decimated, trees completely uprooted, roofs of hotels and apartment complexes peeled off. 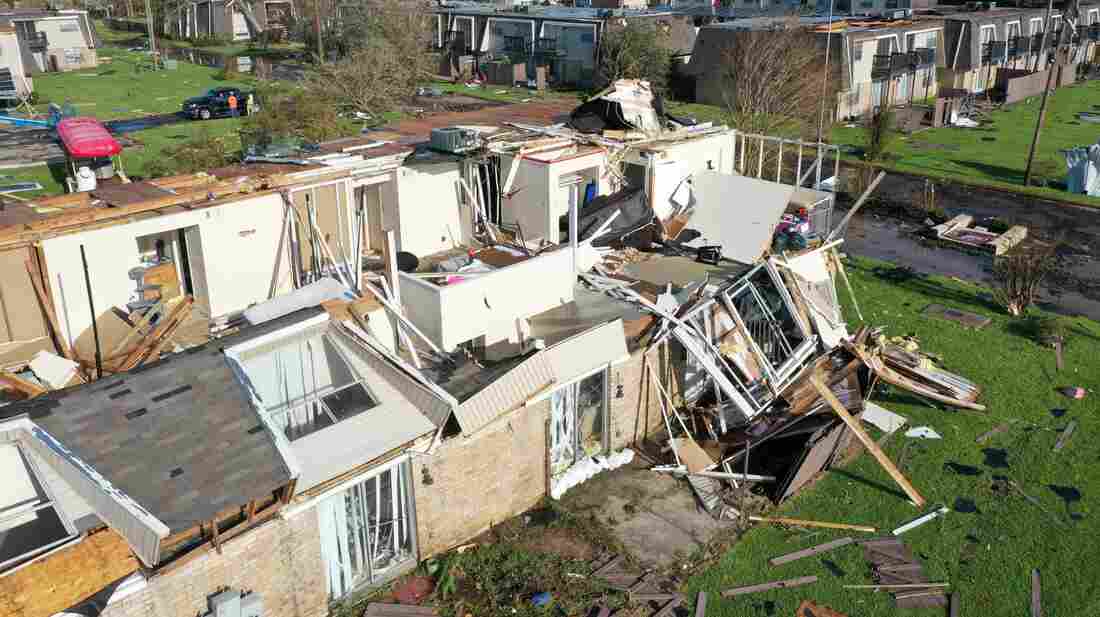 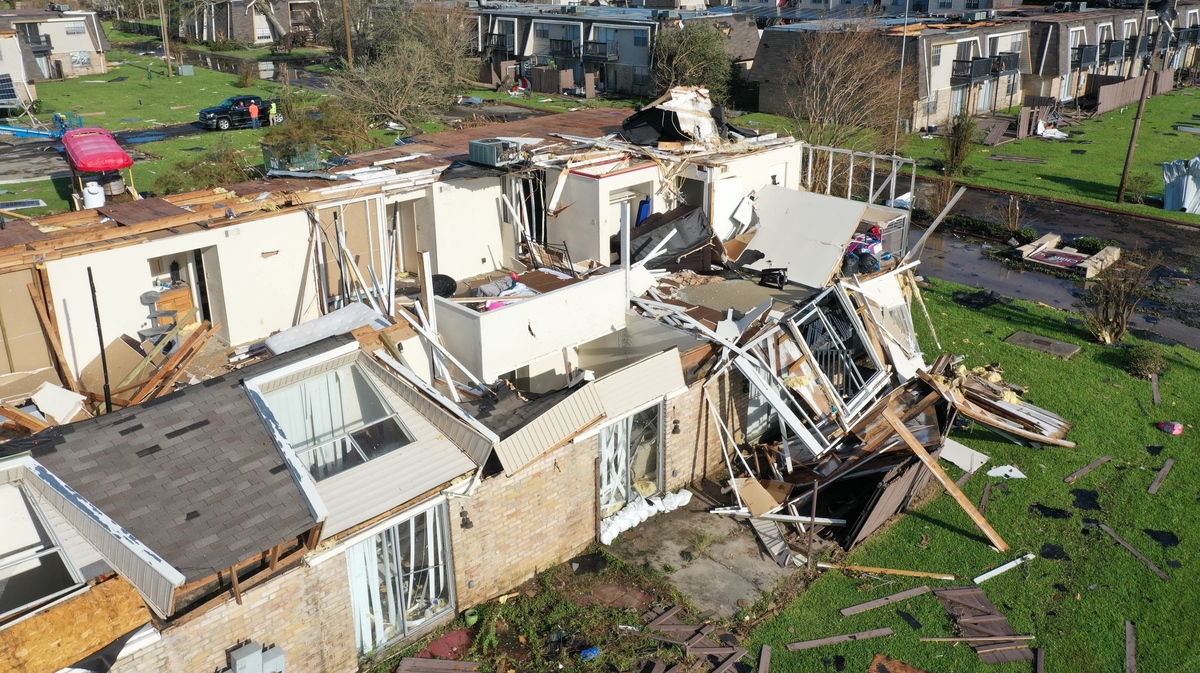 An aerial view from a drone shows a damaged apartment complex on Saturday in Lake Charles, La. The area took a direct hit.

The Red Cross says it has received an unprecedented number of calls for assistance. During past storms, officials have turned gyms and stadiums into giant shelters. But with coronavirus cases rising at an alarming rate in the weeks before the hurricane, it became clear those shelters represented a new danger of their own. Far fewer shelters than normal appear to have been set up in Louisiana, and as of Sunday night, emergency officials were advising anyone who needed shelter to go to the New Orleans area, some 200 miles east of Lake Charles.

Near the airport, first responders have set up a makeshift staging area powered by generators. In nonpandemic times, their work was already challenging with the search for survivors hampered by downed power lines, falling debris and impassable roads.

"COVID brings it to a whole new level," says Michael Kimble, who is in charge of Louisiana's search and rescue teams. His crew is doing daily COVID-19 screenings and temperature checks while wearing personal protective equipment to shield themselves. Protocols are especially stringent for the teams that have come from out of state. An Orlando-based rescue team got rapid COVID-19 tests for each of its firefighters. 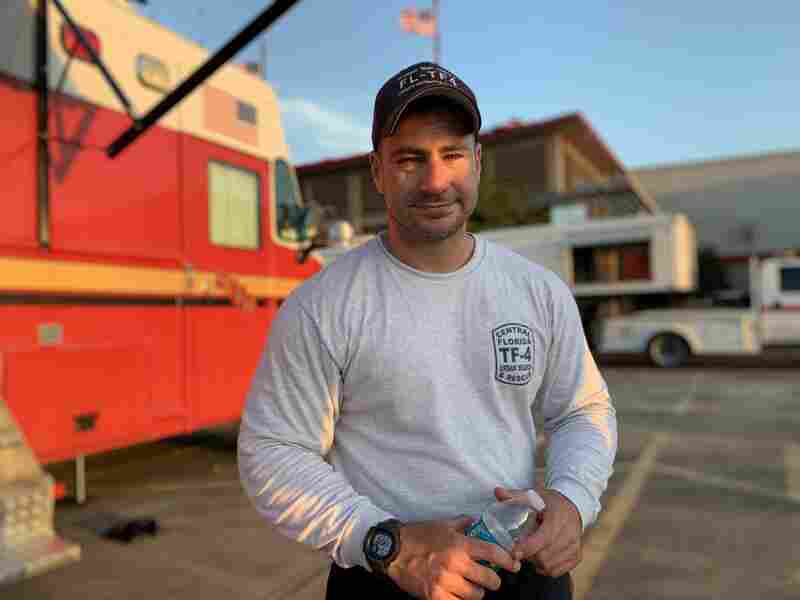 Jeremiah Plasters, a search and rescue specialist from Orlando, has been searching for survivors of Hurricane Laura. Kirk Siegler/NPR hide caption 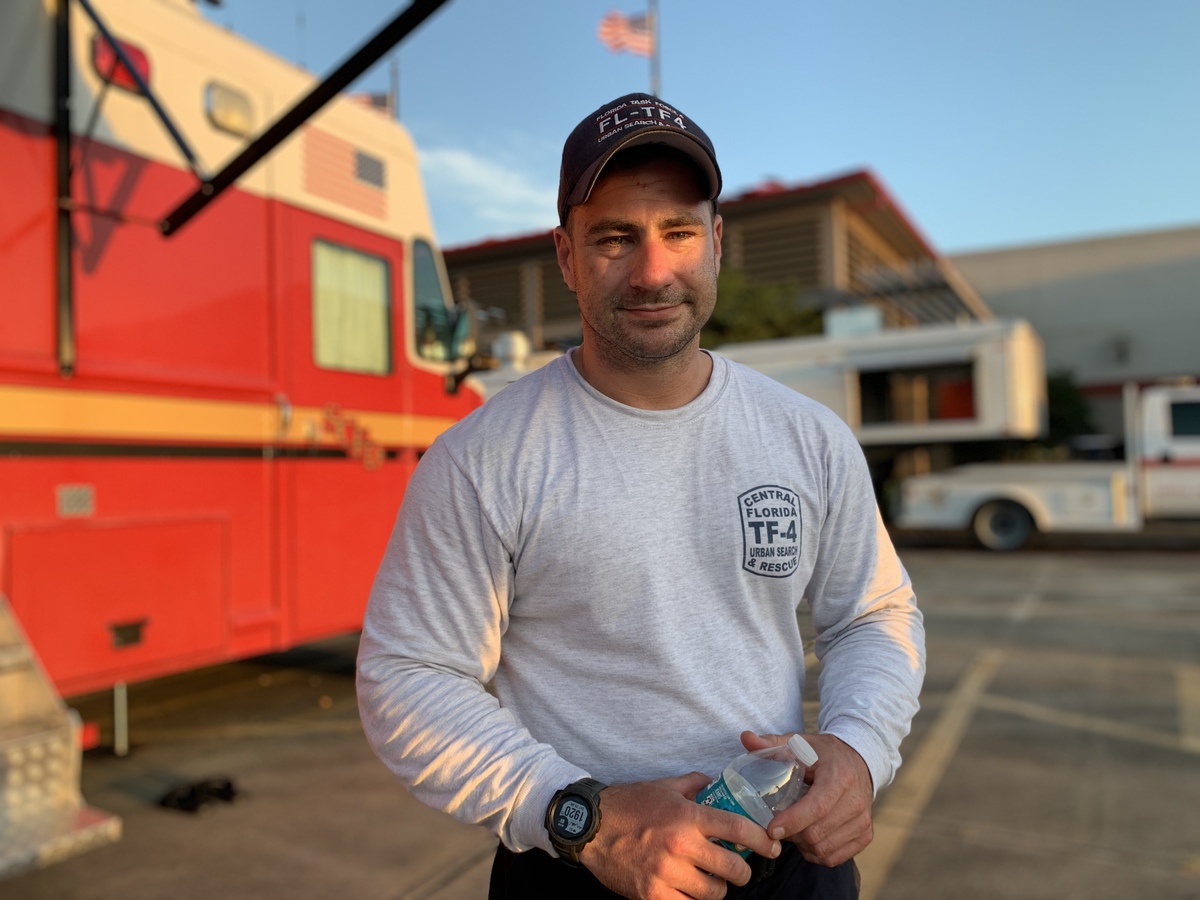 Jeremiah Plasters, a search and rescue specialist from Orlando, has been searching for survivors of Hurricane Laura.

"Everybody tested negative," says team leader Jeremiah Plasters. "Since we're all staying together and we're using our PPE, the only way that we would get it is by someone else making contact with us."

But if they pull people out of wrecked homes into their small boats and trucks, there is no way to be sure they're not exposing themselves to COVID-19.

Louisiana officials have warned that public coronavirus testing, like so many services, has been disrupted. That means there will be limited data about how the cycle of evacuation and return may have spread the virus. While the damage from Laura's 150 mph winds revealed itself after the storm passed, the true impact of the hurricane may take weeks to assess.