Accessibility links
MTV's 2020 VMAs: Recapping Lady Gaga's Night And Nine Other Takeaways It was Lady Gaga's night, BTS finally got its due, Keke Palmer impressively hosts and the lines between "live performances" and "music videos" were blurred like never before. 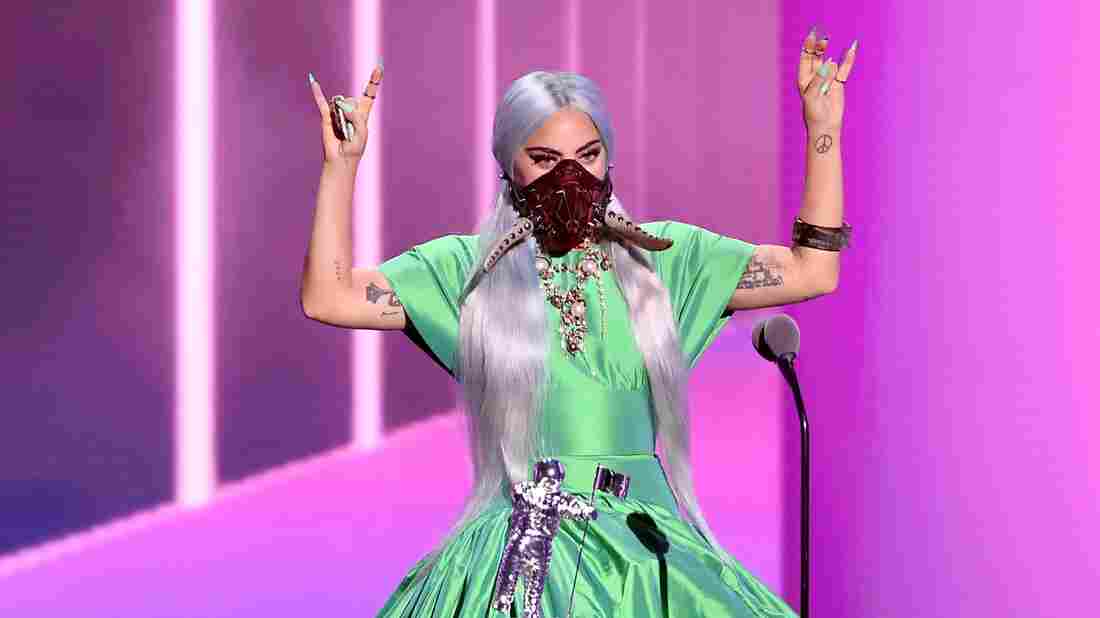 Lady Gaga wore a lot of masks Sunday night, but this is the one with tusks. Yay, tusks! Kevin Winter/MTV VMAs 2020/Getty Images for MTV hide caption 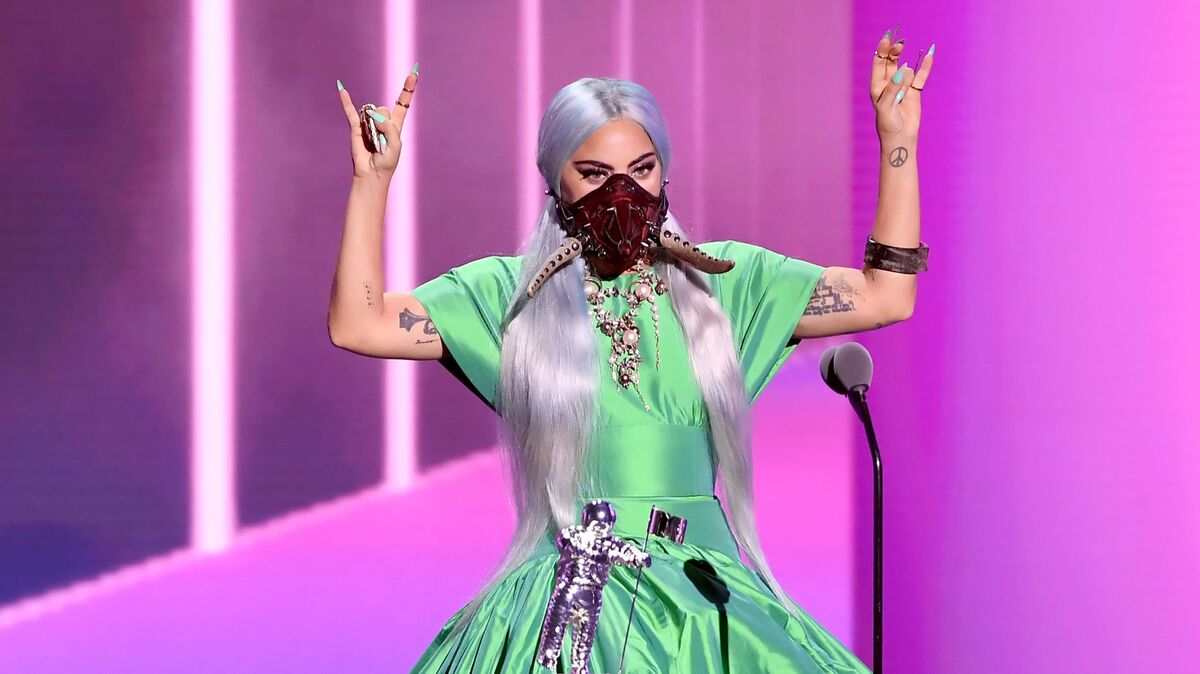 Lady Gaga wore a lot of masks Sunday night, but this is the one with tusks. Yay, tusks!

Awards shows often take place amid distractions, from natural disasters to civil unrest to the aftermath of a high-profile death. Sunday night's MTV Video Music Awards had to coexist with all three, not to mention a worldwide pandemic that made it impossible — and, in New York City, illegal — to assemble a live audience.

Pop Culture Happy Hour is a fun and freewheeling chat about the latest movies, television, books, and music.

Start with We Recap The 2020 MTV VMAs

How did it go? Here are 10 takeaways.

1) The VMAs actually happened in 2020. You'd be forgiven if they'd slipped your mind, but MTV somehow made a performance-driven awards show without live crowds. The energy was weird and spontaneity was hard to come by — more on that in a moment — but they pulled it off, complete with lavishly staged performances by Lady Gaga, BTS, The Weeknd, Doja Cat, DaBaby, Miley Cyrus, Maluma, Black Eyed Peas and others.

2) It was a big night for Lady Gaga. The superstar took home the inaugural Tricon Award — "triple threat/icon"? — which is basically the equivalent of being inducted into the VMAs Hall of Fame. She put on a grand and game performance with a guest appearance from Ariana Grande, she won a bucket of other awards (Artist of the Year, Song of the Year, Best Collaboration, Best Cinematography), she gave a bunch of speeches and she rocked a series of truly magnificent masks. It was her night.

3) It was also a big night for green screens. Without crowds, artists seized the opportunity to seriously blur the lines separating "live performances" from "music videos." What they lost in spontaneity, they gained in production values, from BTS dancing in front of an assortment of wildly different backdrops to Maluma and CNCO each performing at what looked like a neon-lit drive-in theater. Bonus points to rapper DaBaby, who brought in the dance troupe Jabbawockeez to help serve up a bit of visual commentary about police violence.

4) The show appeared to be almost entirely pre-taped. At the very beginning of the show, host Keke Palmer appeared in a lo-res video — it looked as if it was shot on a webcam or cell phone — in which she dedicated the night to the memory of actor Chadwick Boseman, who died Friday. Everything else with Palmer looked a lot slicker, which suggests that the intro was tacked on after the rest of her work was completed. Given the green-screen effects in so many of the performances, there wasn't much here that could really be considered "live."

5) Pre-taped means pre-vetted. The VMAs are typically known for bonkers moments — beefs between performers, Kanye West interrupting Taylor Swift's acceptance speech, that sort of thing. But nothing here could really be engineered to fly off the rails or otherwise surprise, which made for a relatively uneventful evening. The Weeknd gave the night a dose of humanity and gravity by accepting his awards — for Video of the Year and Best R&B — with a plea for "justice for Jacob Blake, justice for Breonna Taylor." But if you were hoping for Kanye West to burst in via hologram and announce that he's a wizard now, it didn't happen.

6) The actual awards were easy to predict. If you wanted to break a tie between, say, Lady Gaga (who performed) and Billie Eilish (who didn't), you didn't have to think very hard. An unforgivably cruel and cynical viewer might be left to wonder whether they'd booked the performers with award winners in mind (or worse). Based on the opaqueness of the VMAs' process, we may never know.

7) BTS was more than an afterthought. For the past few years, the VMAs have made more of a place for BTS than, say, the Grammys. But this was still the K-pop juggernaut's first time actually performing on the VMAs — and the group picked up well-earned trophies for Best Pop, Best Group, Best K-Pop and Best Choreography.

8) About that "Tricon Award"... The VMAs' equivalent of a Lifetime Achievement Award began as something called the "Video Vanguard Award" — and, later, the "Michael Jackson Video Vanguard Award." Without fanfare or even explanation, it would appear that the prize has again been renamed, this time as the "Tricon Award," perhaps as a quiet effort to distance the VMAs from controversies surrounding Jackson. If you hear about these VMAs at all in the coming days, this issue might be the reason why.

9) Black Eyed Peas? Black Eyed Peas were inescapable a few years back, performing at a Super Bowl halftime show and frequently turning up in brightly lit showcases at the Grammys. But somehow, the group had never performed at the VMAs... until the closing set of this year's telecast. Why? Who knows? But those weird glowing crotches will linger as the VMAs' deeply unnerving final image. Thanks, 2020.

10) Give Keke Palmer credit. The actress, singer and newly minted VMAs host had a basically impossible job: She had to maintain energy, perform skits, tell jokes and otherwise keep an awards show moving, and she had to do it in empty rooms. Sure, the production simulated crowd noise, in a bit of fakery that distracted as much as it helped. But Palmer held her own — and, seriously, that was a feat.

See a complete list of winners from the 2020 Video Music Awards.