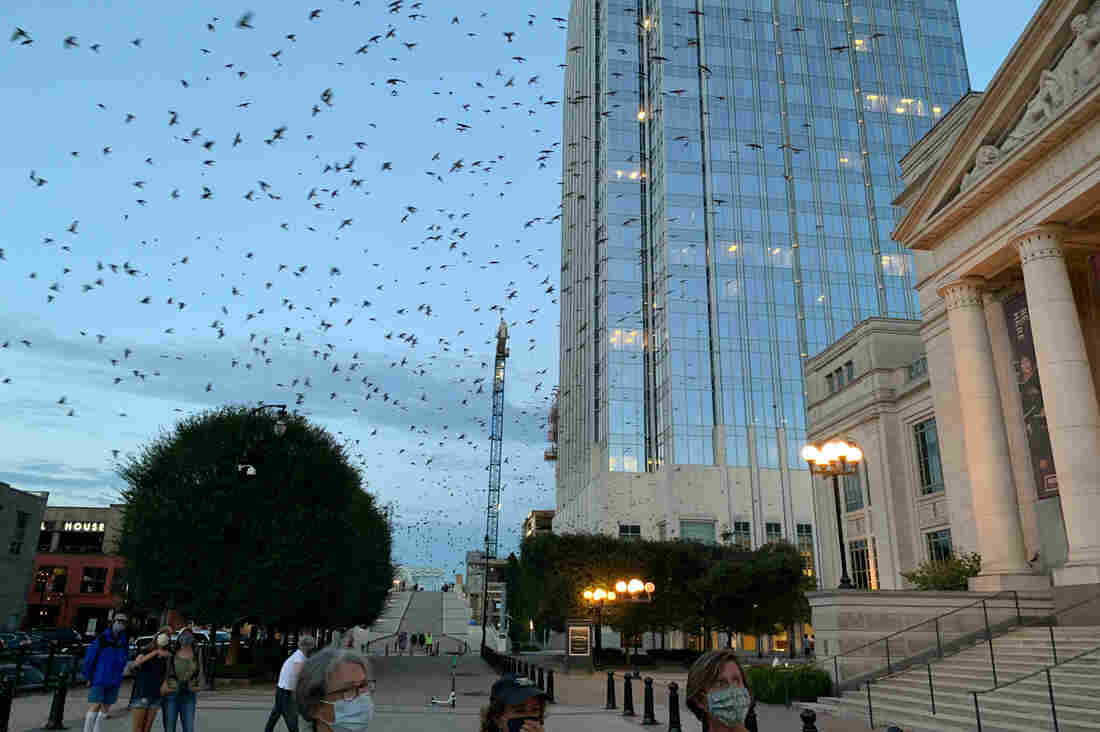 People have flocked to downtown Nashville, Tenn. the past few days to take in a rare sight: thousands of Purple Martins. The migratory birds, on their way south for the winter, rarely roost in urban areas. Blake Farmer/WPLN hide caption 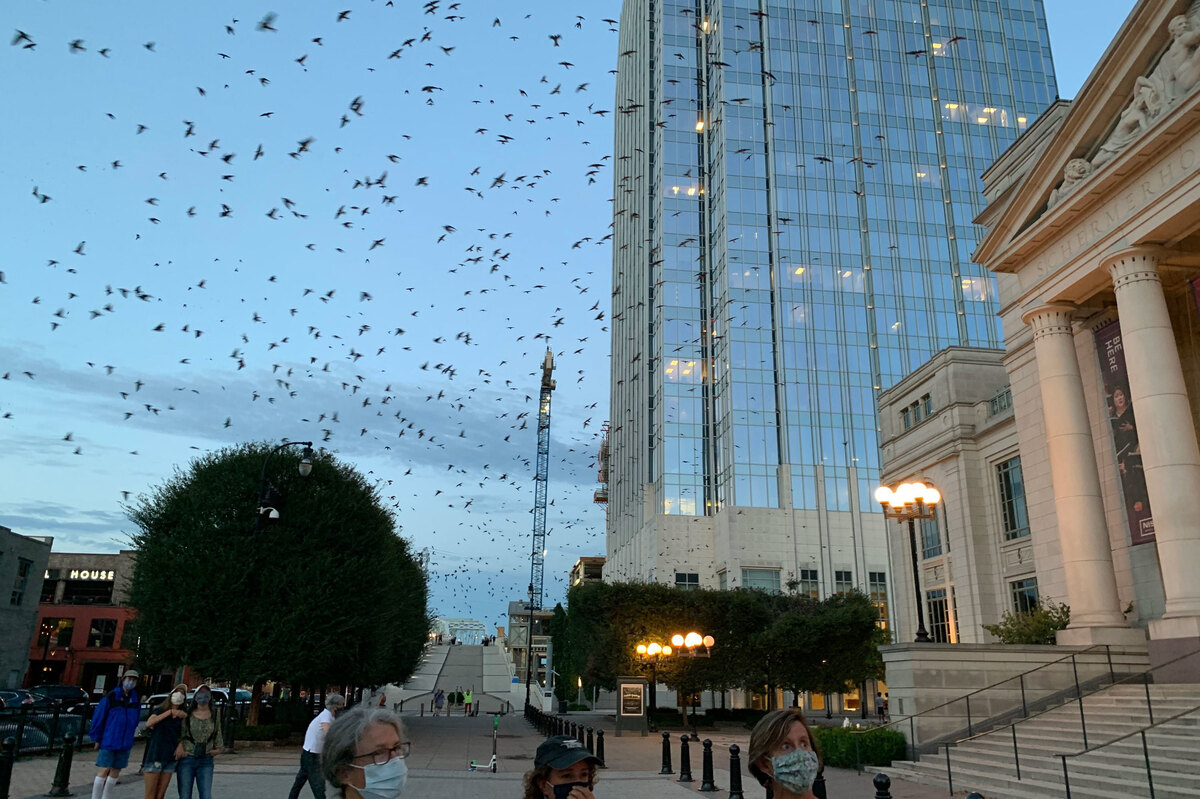 People have flocked to downtown Nashville, Tenn. the past few days to take in a rare sight: thousands of Purple Martins. The migratory birds, on their way south for the winter, rarely roost in urban areas.

Rare purple martins are dazzling birders and bystanders near Nashville's tourist district each night for the next week or two. Biologists estimate 150,000 have chosen to temporarily roost on the plaza outside the Schermerhorn Symphony Center. And the symphony very nearly ran them off as a nuisance until they realized they were playing host to protected migratory songbirds.

Looking overhead as the martins descend into the trees at sunset is mesmerizing.

"Oh my gosh, this is amazing. We're just enveloped right now," avid birder Ed Schneider says as the birds swoop around him and pepper the sky.

Then watchers snap out of it when a little bird poop hits them on the forehead.

The unsightly and unsanitary droppings are why the symphony decided to hire a pest control company. Besides the droppings on the sidewalks and the sides of the Neoclassical symphony hall, the trees are in pretty rough shape too, with their limbs drooping under the weight of these tiny travelers.

Purple Martins, which don't look all that purple as they're darting around, have a special relationship with humans. They rely on people to put up boxes for them to nest in. And then as fall approaches, they congregate in massive roosts, often at the edge of forests or near lakes.

Then they fly south to Brazil to winter in the Amazon, but often they return to the same area at the end of the summer to fuel up before the long flight. And birders spend those weeks observing old roosts and looking for new ones, which are so big they show up like rain on weather radar.

Enthusiast and professional biologists like Melinda Welton of the Tennessee Ornithological Society were already out on the symphony plaza in Nashville when a truck pulled up early last week, ready to fog out the flock.

"We actually were lucky to have been here," she says.

Welton informed the crew of the Migratory Bird Treaty Act. She and her husband called all the wildlife agencies they could reach after hours. And the pest removers backed down.

"They didn't know, and now we all get a chance to celebrate this spectacle," Welton says.

The symphony hasn't performed since the coronavirus pandemic hit, and its finances have been rocked. Chief operating officer Jonathan Marx says they were simply trying to protect the $100 million building from expensive damage. Previously, the campus has had trouble with starlings, an invasive species, and Marx assumed that's what was making such a mess this time.

Since realizing their identification error, the symphony has welcomed birders nightly to enjoy the display.

"This is not necessarily how we would have thought people might come together," Marx says. "But any opportunity that we can create that, particularly being in the heart of downtown, then we have to embrace that."

Martins are roosting at hundreds of sites right now around the country, though none is quite so visible.

Joe Siegrist of the Purple Martin Conservation Association tracks them through radar, where they show up each morning as they disperse for the day to hunt for insects. He says the droppings are just part of the deal.

"Usually, that's something the landowner just has to accept," Siegrist says. "We do our best to reassure the landowners that this is a short lived process."

Often, conservation groups or local governments will pitch in to cover the cleanup cost, and that conversation is already started with the Nashville symphony. But there's no point to break out the pressure washers until the martins depart in a week or two.