Accessibility links
Long-Term Coronavirus Recovery Is Hard For Undocumented People Without Insurance People can spend months recovering from COVID-19 and sometimes have lasting disabilities. That is especially hard for undocumented people, who often are in high-risk jobs without health insurance. 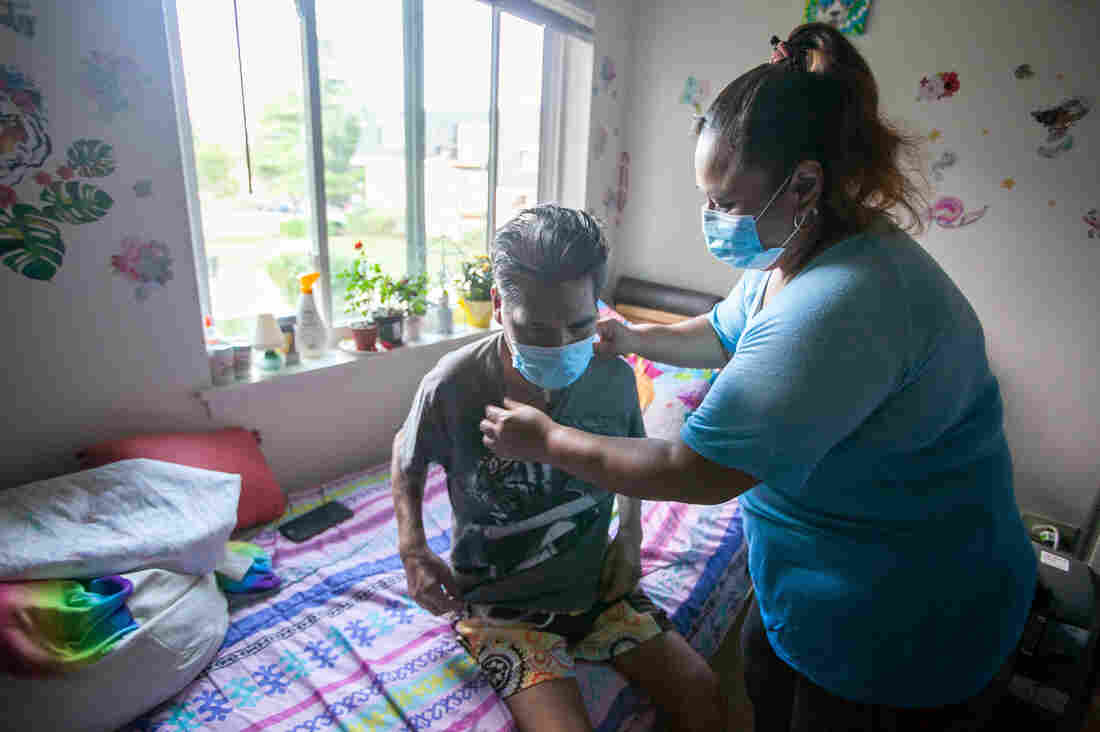 José spent three months in the hospital being treated for COVID-19. "All of the nurses clapped for me as I was leaving the hospital," he says. But now he faces a long recovery at home. Eddie Quiñones for NPR hide caption 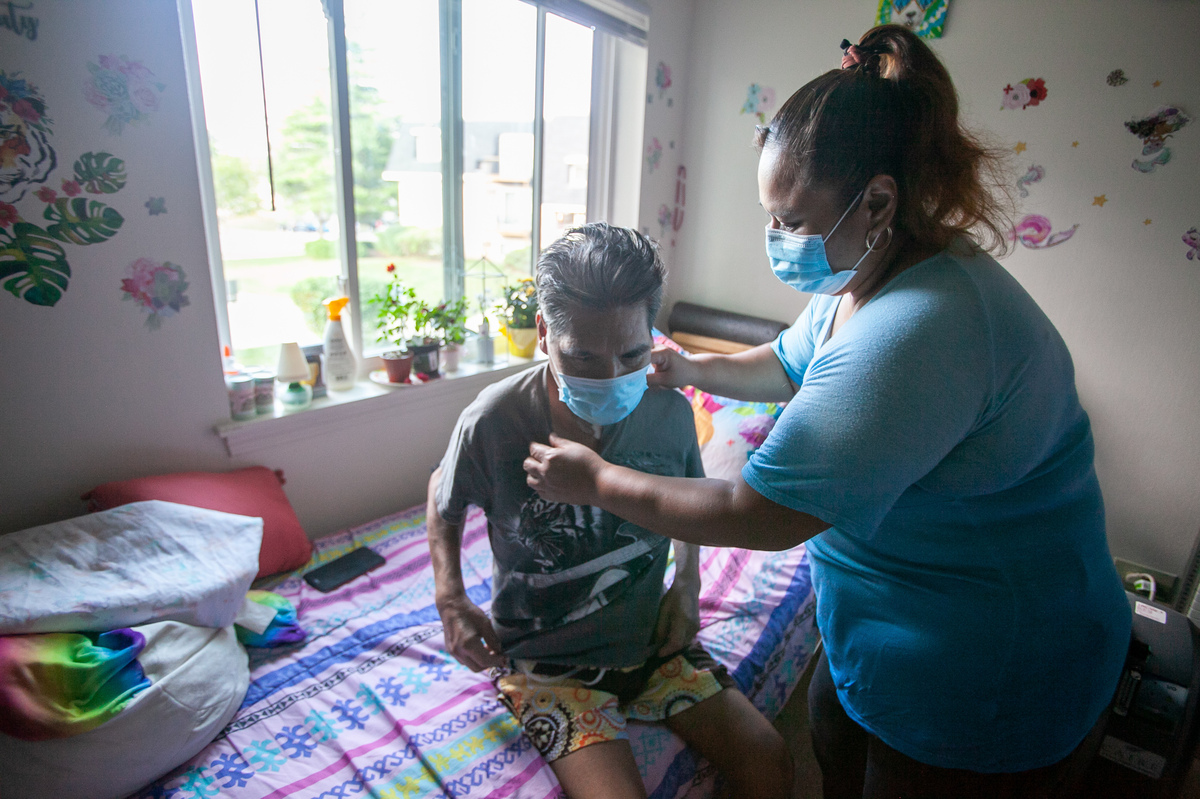 José spent three months in the hospital being treated for COVID-19. "All of the nurses clapped for me as I was leaving the hospital," he says. But now he faces a long recovery at home.

In early August, José came home to the Chicago apartment he shares with his wife and five children. He'd just spent three months in the hospital after contracting the coronavirus.

"We were all so happy," says his daughter Alondra, describing that day. "Everybody in the hospital was like, he was about to die. There was no more hope for him. ... So now we're like, 'Thank God, he's still here with us.' "

José, who is from Mexico, is undocumented. His children were all born in the United States and have U.S. citizenship. NPR agreed to use just first names for him and his family.

Once José was home, it fell to his family, and especially José's wife, to take care of him. He came home on a portable ventilator and needed to use a feeding tube.

Latinos are more likely to deal with a more severe illness from COVID-19 — and when they're undocumented, they're less likely to be able to get the medical care they need to address it. It's hard to track how many undocumented immigrants get COVID-19. But they are high risk, says David Hayes-Bautista, who directs the Center for the Study of Latino Health and Culture at the David Geffen School of Medicine at UCLA. Not only do they often lack health insurance, many live in crowded homes with multiple generations of families. And many work in jobs where exposure to the coronavirus is high — as aides in nursing homes, as farmworkers or in meat-packing plants or, like José, in restaurants.

And, like many people with COVID-19, José faces a long recovery. There is growing evidence that a significant number of people — perhaps even hundreds of thousands of Americans — will experience long-term complications from COVID-19. Many of these people, sometimes referred to as "long haulers," will need continued medical care, and that means the ability to recover could be even harder for the nation's 10.5 million to 12 million undocumented immigrants.

In late April, when José started feeling sick — with a cough — he was afraid to go to the hospital. He'd heard that people with COVID-19 died in hospitals. He was also afraid that, without insurance, his family would get a large bill for his care.

Then came shivers, fever and eventually so much pain that José could no longer avoid seeking medical care.

In the three months José was in the hospital, his family couldn't visit. The hospital, in line with hospital policies across the country, had banned visitors to control the spread of the virus. Instead, the hospital staff helped José with video phone calls to his family.

From the perspective of his family, the doctors and nurses seemed pessimistic about his prognosis as he lingered on a ventilator. "We were about to lose hope," says his daughter Alondra, 24. "We were praying and praying."

Then things changed. José got better. He moved from the ICU to the rehab wing. "Thank you very much to the hospital," he says, praising the doctors, nurses and staff who cared for him. "For me, kisses. Besos for the people. Thank you."

Now that he's back home, José spends his days propped up on pillows in a hospital bed. A bandage on his neck covers the spot where a surgeon cut a slit into his neck to insert a tube for the ventilator.

José came home initially still using a portable ventilator to help him sleep and breathe. His wife, trained by the hospital, managed it. She learned how to connect the tubes and other pieces to the machine and to adjust his mask so the air did not leak. He stopped needing the ventilator after several days.

A feeding tube lies underneath his dark blue polo shirt. His wife learned how to do the feedings, first checking that his stomach was empty and moving him into the proper sitting position — so there would be no dangerous reflux into his esophagus — and filling a syringe with the nutrients to send through that tube connected to his stomach. 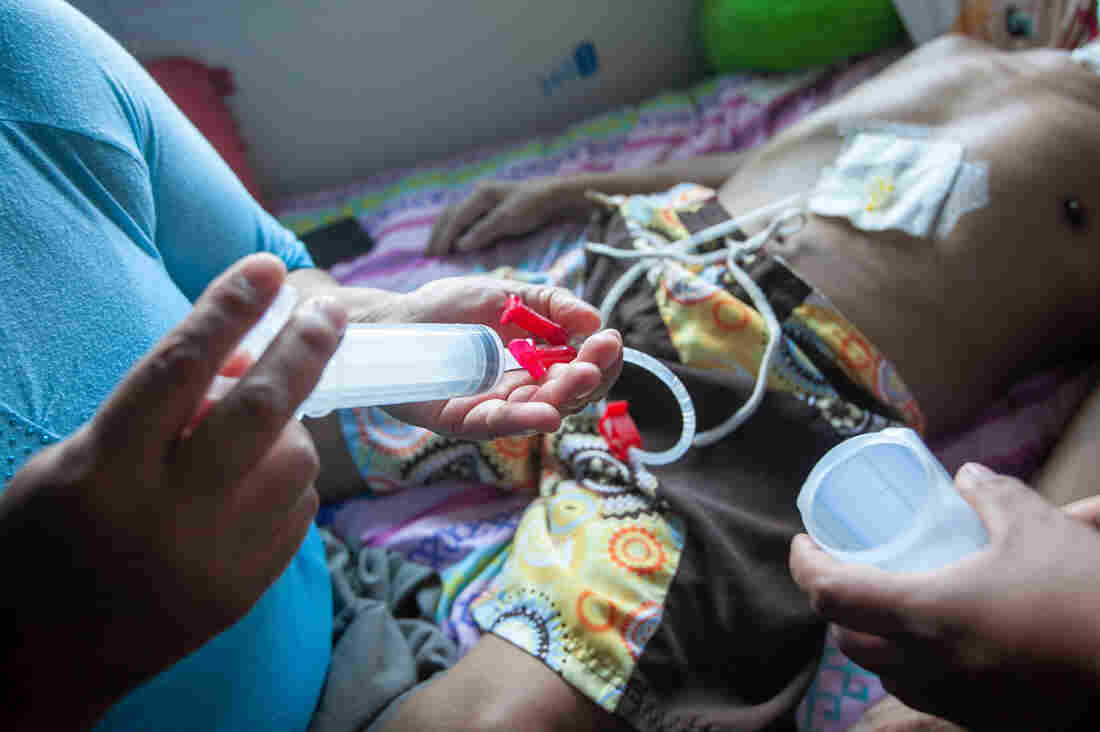 When José came home, his wife took on his medical care. José still cannot eat solid food, so his wife — trained by nurses — uses a syringe to send formula through his feeding tube. Eddie Quiñones for NPR hide caption

Nurses come by and check on him from time to time, Alondra says. Some hospitals got money in the CARES Act to provide medical treatment to the uninsured. But some hospitals say the rules are confusing and have had difficulty getting the funding, notes Hayes-Bautista, the UCLA professor who sits on the board of a hospital in East Los Angeles, the heart of the city's Latino population.

When someone comes home from the hospital after COVID-19, that's an overlooked but dangerous time, says Aida Giachello, a research professor of preventive medicine at Northwestern University's Feinberg School of Medicine.

"Most of the research on COVID that is emerging is indicating a pretty high number of individuals are being released from the hospital with severe conditions," says Giachello, who studies health care disparities for Latino and Black patients.

Bob Shea sees this all the time, too. He's co-founder of the nonprofit Devices 4 the Disabled. Along with a neighbor, Ed Kane, he started the nonprofit in 2015 to distribute durable medical equipment to people who couldn't afford it. 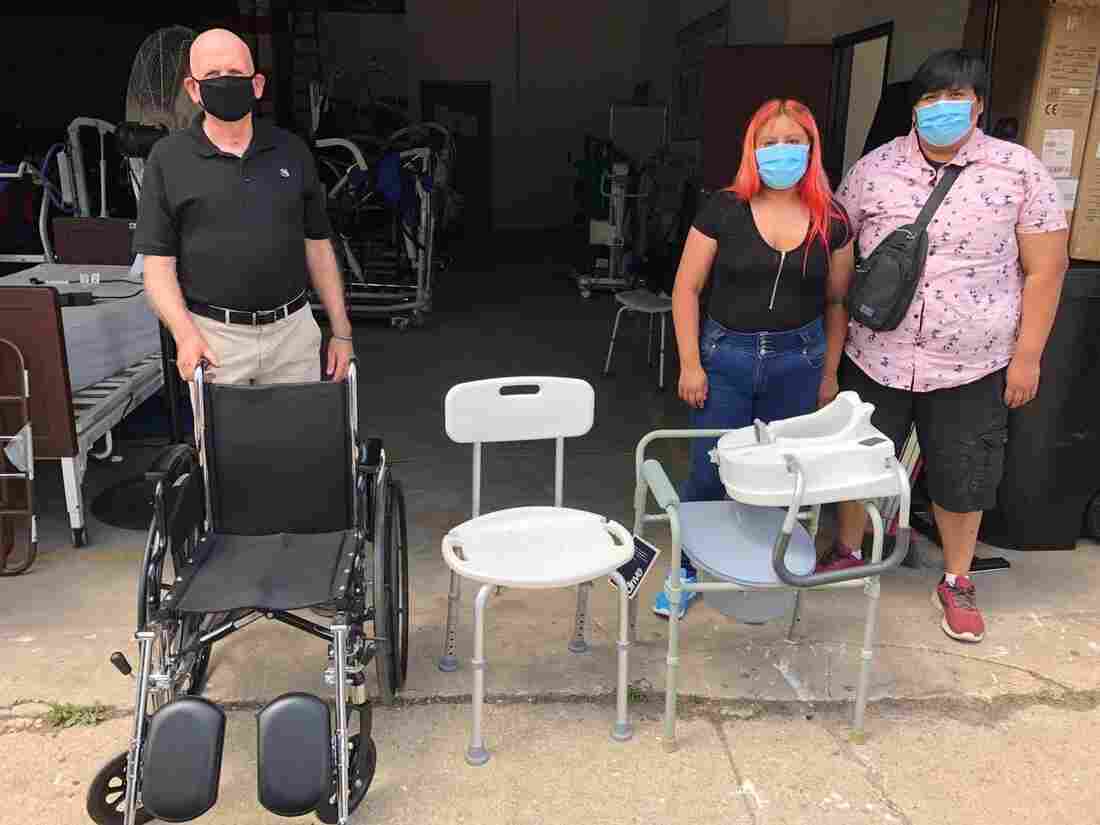 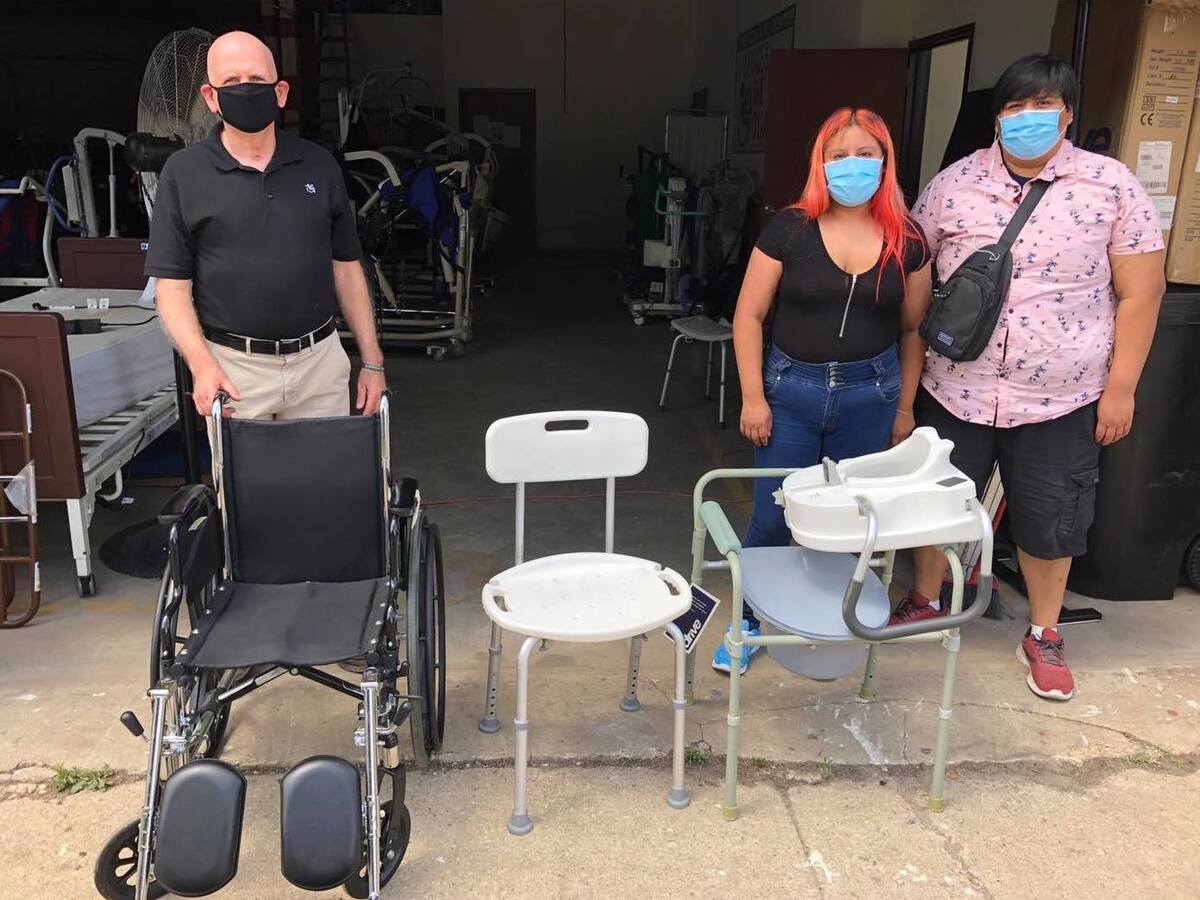 Alondra and her brother pick up medical equipment donated by Devices 4 the Disabled for their father's return home from the hospital.

"We see them all week, every week, now," says Shea. "Where people are getting discharged with scarred lungs, damaged heart, complete loss of mobility, neurological issues. They are still significantly limited. And then it's up to the family to somehow figure it out."

Both men got into this work from personal experience: Shea had dealt with Guillain-Barre syndrome and spent seven months in a hospital. Kane, who died in 2016 of ALS, discovered that even though he had private health insurance, it covered only $5,000 of a $30,000 wheelchair.

Now, many of the clients of Devices 4 the Disabled are undocumented immigrants in Chicago who don't have health insurance.

"For José and his family, just to get discharged to a bed is putting them at huge risk for pneumonia, for pressure sores that can turn into sepsis," he says.

For José, Shea's group donated equipment to help with that care — a wheelchair, a hospital bed, a shower chair and other medical equipment. Those can cost thousands of dollars, Shea notes, especially if you don't have health insurance.

Or if you don't have a job. 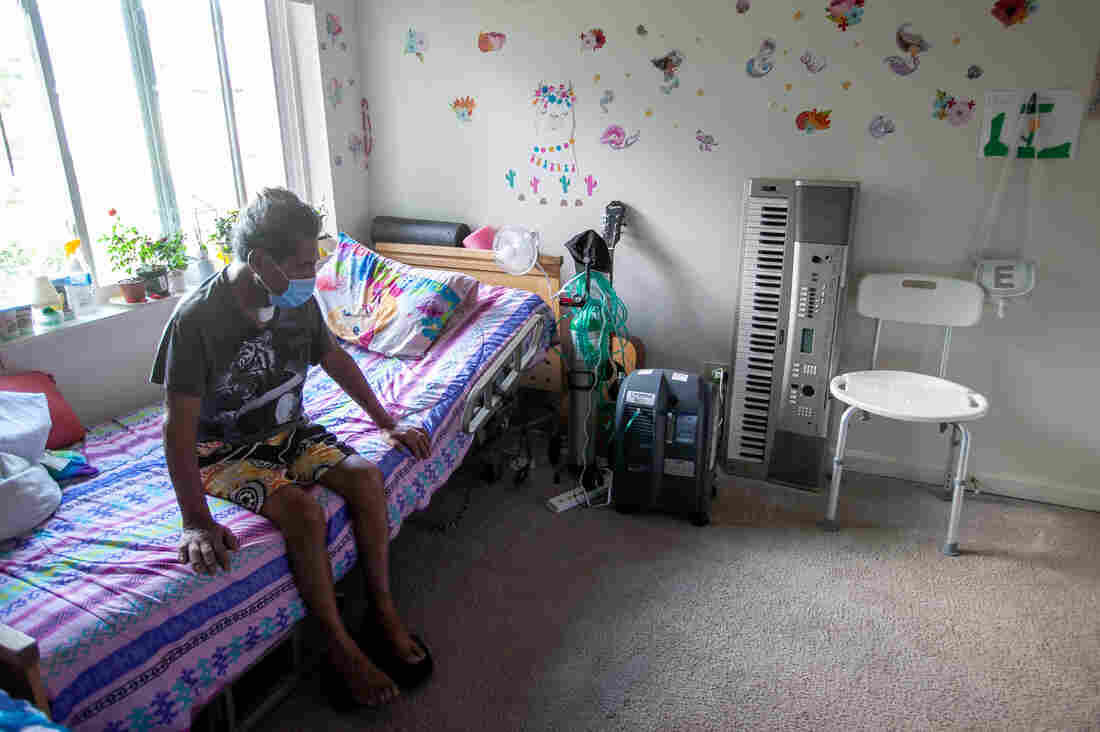 José worked at a Chicago restaurant before he got sick. He'd like to work again, but he doesn't know when he'll have the strength. Eddie Quiñones for NPR hide caption

José is out of work. There is an advantage to living in his multigenerational family: José's older children are working. For now, they're paying the rent. And they're buying his medicine. He would like to go back to working in a restaurant, but his old job is gone.

Meanwhile, he has months and months — maybe longer — to recover.