Accessibility links
Small 'Learning Hubs' Can Help Some Students When Schools Are Closed Small groups of students, organized at the local level, may offer a more equitable alternative to "pandemic pods." But they're far from universally accessible. 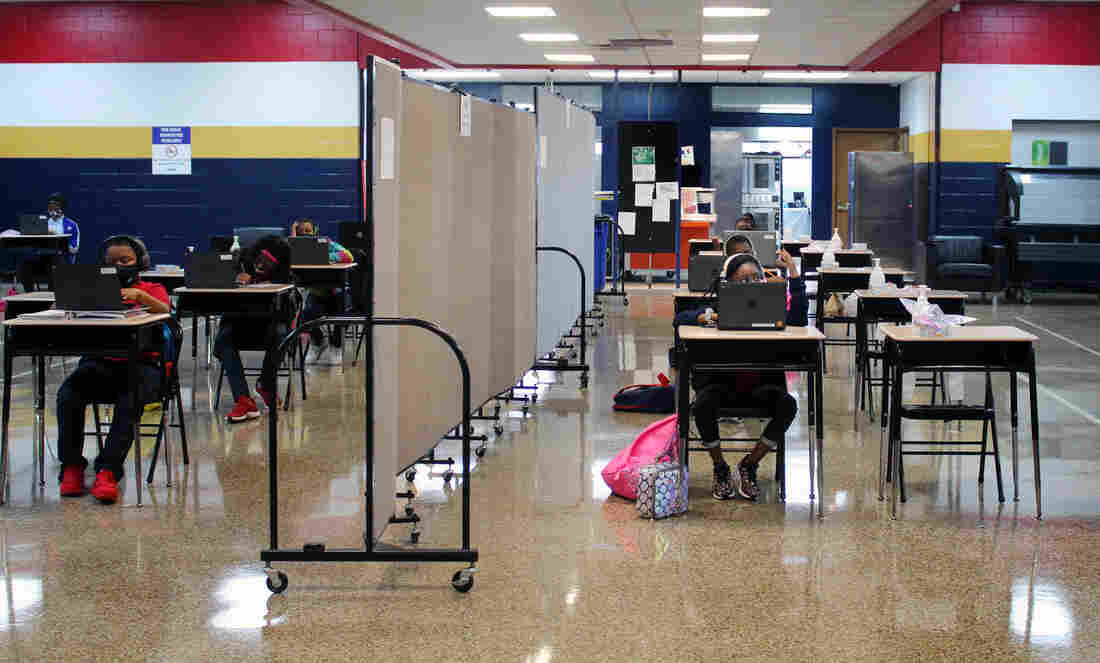 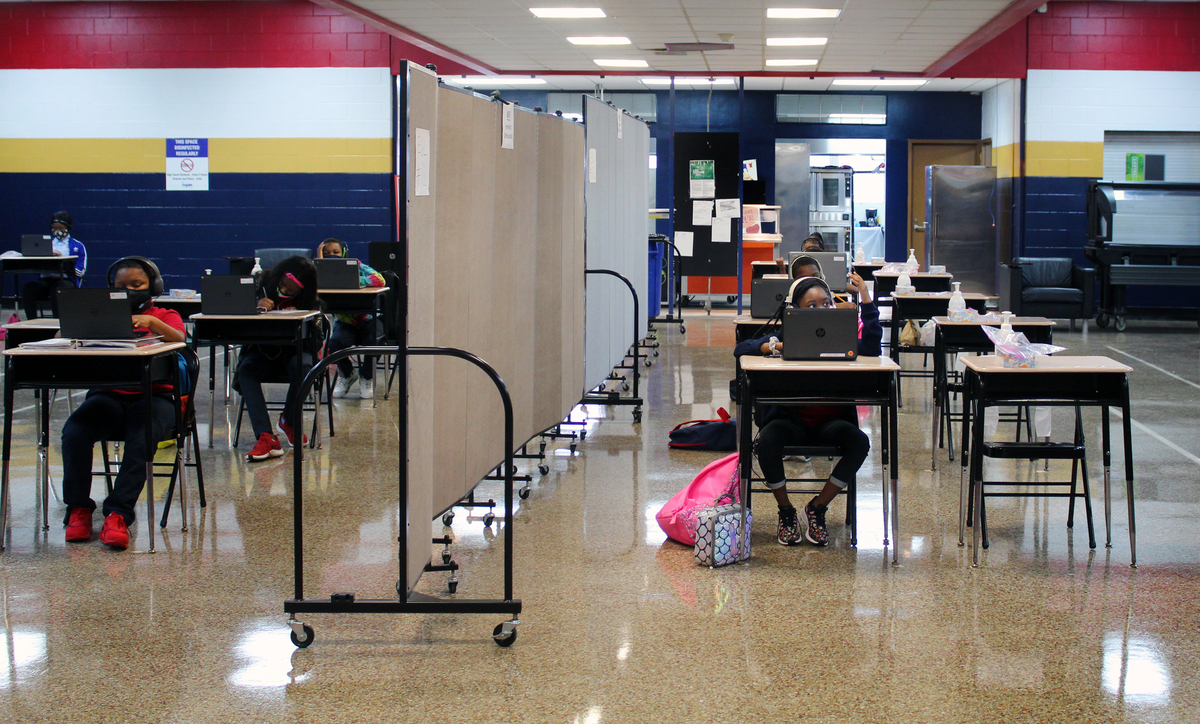 A flex wall separates two groups of students in the cafeteria at Dwight D. Eisenhower Charter School in New Orleans.

At Dwight D. Eisenhower Charter School in Algiers, a low-slung brick building across the river from downtown New Orleans, school leaders greet students as they make their way into the building. All are masked.

In the cafeteria, a movable wall cuts the space in half, separating the students into socially distanced groups of nine. Strips of tape mark separate pathways for students and staff. Big pumps of hand sanitizer sit on each desk, and everyone, teachers and students, is wearing a mask.

The building has capacity for more than 600 students, but today they're expecting fewer than two dozen. That's because this isn't school exactly. It's a "learning hub," where students will do their virtual classwork on city-provided computers with a little bit of guidance from staff. The city of New Orleans, and some of its charter schools, plan to set up at least several hundred of these free learning hub spots at schools, libraries and other locations.

Just over half of school districts across the country are providing only virtual learning or, at most, part-time hybrid schedules, according to a recent survey from the Center on Reinventing Public Education. This creates a new child care gap for millions of working parents. Plus, virtual learning requires computers, which an estimated 7.3 million children don't have, and ideally high-speed broadband Internet, which an estimated 16.9 million children don't have, according to a recent analysis by the Alliance for Excellent Education.

Families with the means may be hiring private tutors, and getting together with other families for socialization, in what's been dubbed "pandemic pods." That solution has been criticized as inequitable. Now, some communities across the country are striving to create free or low-cost alternatives. These, dubbed "learning hubs" or "learning labs," are being organized by cities and school districts, often in partnership with local nonprofits, to offer students a free or subsidized safe place to go during the day, and help with remote learning.

The city of New York has pledged to create 100,000 spots; San Francisco, 6,000. The YMCA is helping to set up "hubs" or "learning academies" in California's Silicon Valley; Boston; Chicago; Houston; Memphis, Tenn.; Huntsville and Montgomery, Ala.; Florida; and La Crosse, Wis.

In New Orleans, Timolynn Sams is director of community engagement and impact at InspireNOLA, the charter school network of which Eisenhower is a member. They have opened up "hub" spots at all eight of their school buildings, and they're at capacity a few weeks after the start of school.

The access to Wi-Fi is a big draw as well as part-time free child care. She notes the equity gaps inherent in this arrangement. "Our private and parochial schools are back in session. None of our public schools are." Public schools in New Orleans are 91% students of color, and 82% economically disadvantaged, while private and parochial schools are far more skewed toward white and affluent students.

One of the big questions hovering over these learning hubs is: How can it be safe to congregate children, including in school buildings, if it's not safe to open schools? Across the country, learning hub operators say the key is keeping numbers small.

In the case of YMCA-led programs, they also have the benefit of experience. YMCAs across the country ran child care programs for essential workers throughout the early months of the pandemic for 40,000 children, with few reported cases and no outbreaks.

In Wisconsin, Jennie Melde is the director of youth development at the La Crosse YMCA, which is planning "learning lab" programs for about 800 children in partnership with three different local school districts. Some will be sited in school buildings, with school personnel on staff. They will be free for students during traditional school hours, with additional fees tacked on for before- and after-care.

"Because we're the YMCA, and because we've been doing emergency child care and child care through the summer, we've been through a lot of the things that schools are just preparing to go through, like what do you do when there's a positive case? How do you screen children in your program? How do you train staff? We're already set up to do those things."

Not only has the YMCA been running child care programs safely for more than 100 days at this point, Melde says; it also has the experience of having to close down after a positive case and then reopening — and doing so with no more reported transmissions.

"Most of our families were very willing to come back and be a part of our program," she says, "because they knew and trusted our safety practices and safety protocols." This experience of stopping the spread gives Melde confidence.

However, William Hanage, an epidemiologist at the Harvard T.H. Chan School of Public Health, says there are still health worries with learning hubs.

The biggest problem arises, he says, in districts that have hybrid schedules. Students might be attending school in person on Monday with one cohort of 12 children, and attend a "hub" with a different cohort of 12 children on Tuesday. Total contacts: effectively doubled. "Not adding new contacts should be the name of the game," Hanage says.

Even in places where school is entirely virtual and students are attending only the hub program, the makeup of the groups may change from day to day. For example, at some YMCA programs, to provide parents the maximum flexibility and affordability, children can attend as little as one day a week.

Plus, Hanage adds, in these more informal settings — outside of school buildings, being set up on a relative shoestring, with staff who may be low-wage child care workers rather than licensed teachers — "you may have less opportunity to be able to control physical distancing or testing, any of the things that you would be trying to do to prevent the spread of the virus."

There's another issue, too. Keeping hub numbers small may be crucial to preserving safety, but it may be directly at odds with providing access to all in need — or even those most in need.

With a pandemic-size hole in city and state budgets, and Congress' failure so far to pass a second relief package, many communities may not have enough money.

"It was a balancing act of trying to figure out how many children we would be able to appropriately serve," says Maria Su, executive director of San Francisco's Department of Children, Youth and Their Families.

San Francisco officials compared notes to get a rough head count of their most high-need populations: children who are homeless or living in single-room-occupancy hotels, are in foster care or public housing, and/or are English language learners. Then they set out to create spots for all of them, using existing nonprofit agencies that provide after-school care.

To keep the groups small and distanced, they are spreading out to 80 sites such as libraries and park facilities; so far they've secured about a third of what is needed. "We are, on a daily basis, trying to recruit more sites so that we can, of course, open up more opportunities," Su says.

The next missing piece is to find and register those children. Su says they're working with community leaders in public housing, homeless communities and elsewhere for a planned October launch.

In New Orleans, Emily Wolff, with the Mayor's Office of Youth & Families, says the hubs there get funding from the federal government, which means a daunting amount of paperwork.

"We wish we could just have them fill out a simple registration form and get signed up right away," Wolff explains "but that's made it a little bit slower. And unfortunately for some families, they see all that and it's just a barrier."

New York City, which has made the biggest pledge, has released few details thus far. Maj. Kevin Stoops of the local Salvation Army says he's been in talks to host at most 160 children at four locations within New York City. "We have to ramp up very quickly to get a staff in place." And then there's fundraising: There will be extra administrative expenses for these nonprofits that the city, and other communities around the country, are not likely to pay for.

With money, public schools could be the ones to secure space, put safety protocols in place and hire enough people to educate all their students for free in small cohorts. States might need to issue emergency certifications to teaching personnel. It's been proposed that some kind of national service program be created for unemployed youth and college students who are themselves taking online classes.

But the money, so far, isn't there. And so "learning hubs" are setting out to provide some of the services of public school, minus in-person instruction, to a very small number of children. They are in theory targeted to the most vulnerable, but no one is claiming they're going to reach every family that could benefit.