Accessibility links
Pandemic Emptied Big City Office Buildings, But For How Long? As commercial real estate continues to lie vacant around the U.S., it may contribute to a vicious economic cycle that reshapes New York and other cities. 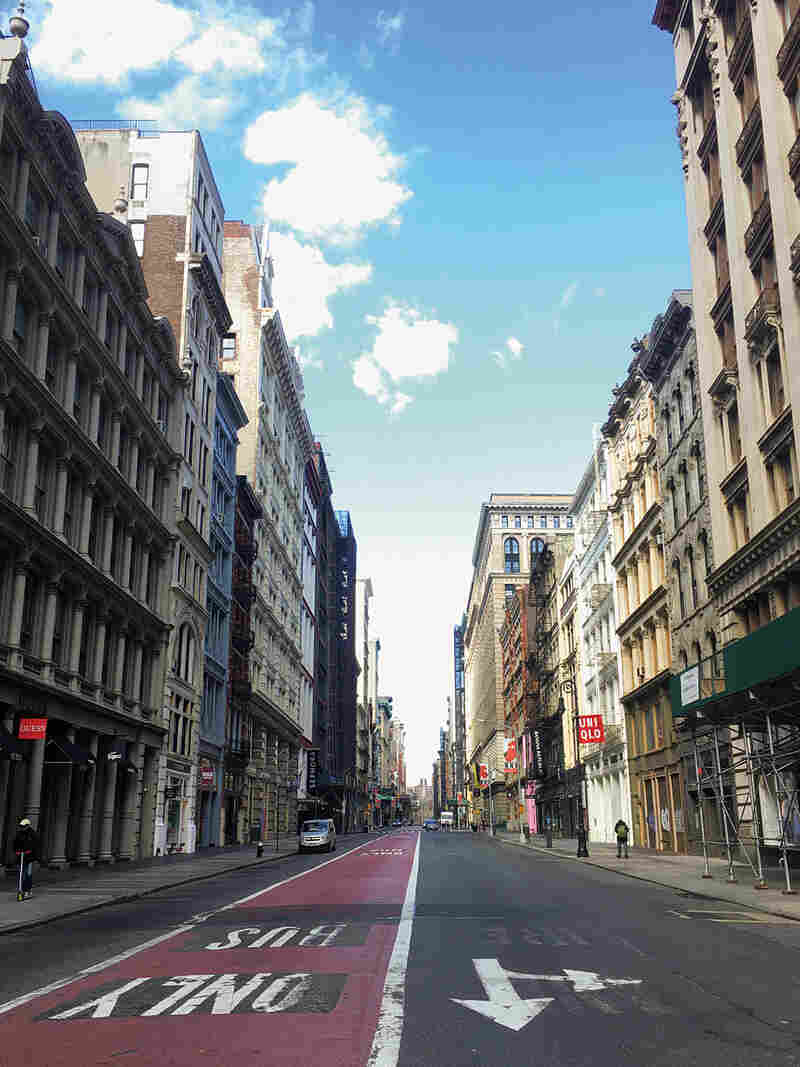 Empty offices sit above empty retail stores on Broadway in downtown Manhattan. As commercial real estate continues to lie vacant around the U.S., it may contribute to a vicious economic cycle that reshapes our cities. Ryan Kailath for NPR hide caption 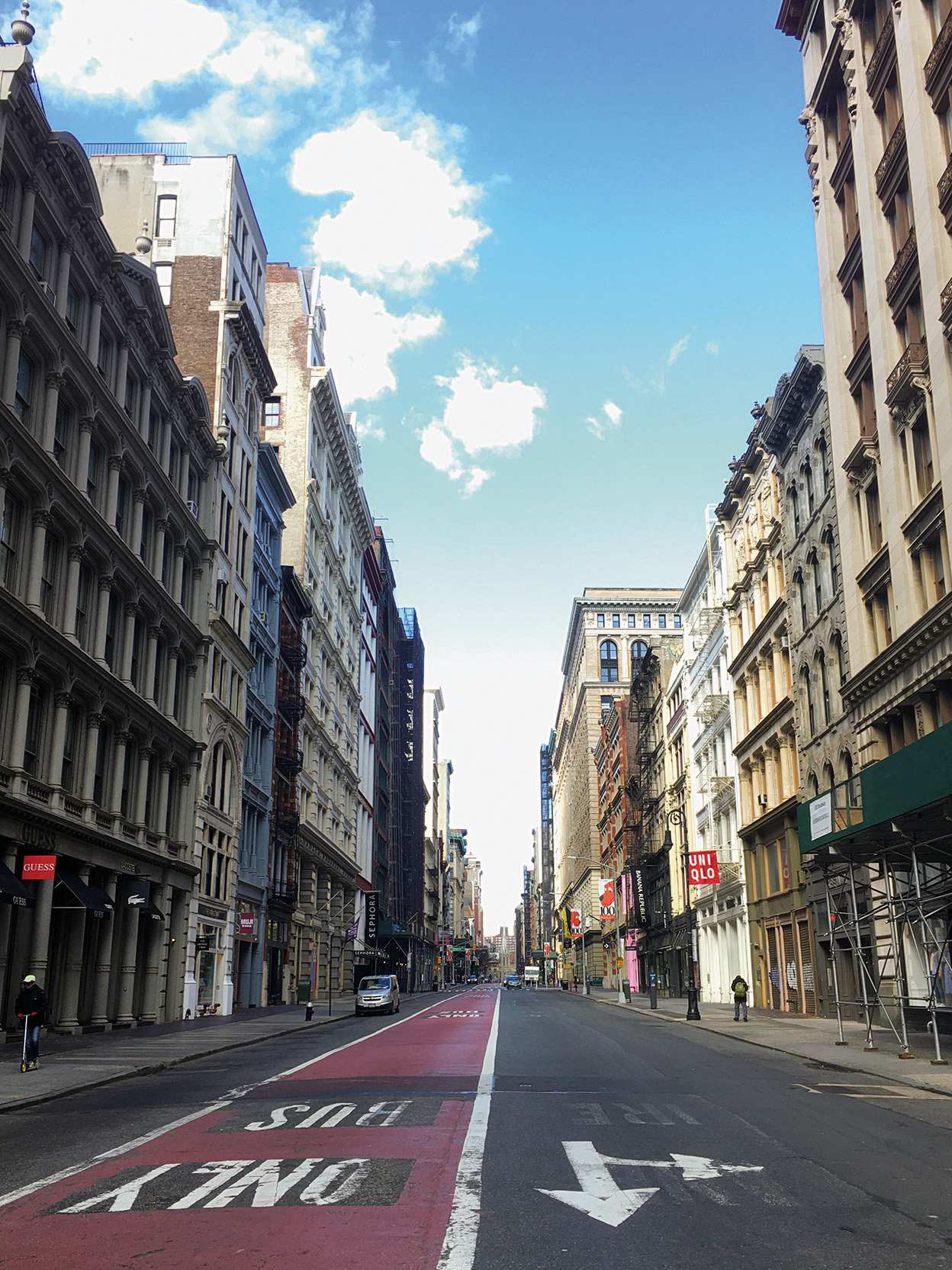 Empty offices sit above empty retail stores on Broadway in downtown Manhattan. As commercial real estate continues to lie vacant around the U.S., it may contribute to a vicious economic cycle that reshapes our cities.

Adam Johnson enjoys going into the office. It helps that he works in one of the nicest buildings in Midtown Manhattan: a 35-story art deco high-rise at the corner of 58th Street and Fifth Avenue, overlooking Central Park and the Plaza Hotel.

Johnson's a stock picker — he writes an investment newsletter called Bullseye Brief — and, ostensibly, he shares the sixth floor with a real estate showroom and an assortment of hedge funds. They all left months ago.

"I am the only person who's been coming in here since April 1st," he says.

Unlike other office spaces frozen in time when the March lockdowns hit, Johnson's floor is completely stripped bare. No desks, no chairs; only the occasional computer cable dangles idly from the wall.

"This is what happens when people move out," Johnson says, gesturing to a massive conference room with million-dollar views over Central Park. "I come in here and I do yoga."

By this point, you've read plenty about real estate and the coronavirus pandemic, as lockdowns and restrictions have shuttered hotels and storefronts and may precipitate a wave of evictions and foreclosures.

For cities, as well as their tax bases, empty commercial real estate presents a crisis still looming. The pandemic hit the ground floor first, knocking out smaller shops and restaurants. Trouble may not creep upstairs to the office floors until six to nine months later, according to Victor Calanog, head of commercial real estate analytics at Moody's Analytics REIS.

Because office tenants tend to hold longer leases, averaging around 10 years, Calanog says, they take the dramatic step of breaking a lease to cut costs only if a downturn is prolonged enough to justify it.

"We would typically expect that to occur sometime in another six months or so," Calanog says. "What's complicating the situation now is a lot of companies are realizing they can work remotely. So they're thinking, 'Hey, do I really need this much office space?' "

Moody's is forecasting a 21% drop in advertised rent for new commercial listings in New York City this year. That's worse than the 19% drop over the worst stretch of the 2008-2010 financial crisis.

Calanog echoes the sentiment of other real estate analysts, urban planners and investors, who generally expect commercial real estate demand to return to pre-pandemic levels in a few years. The problem is that until then, office landlords have their own bills and mortgages to pay — along with real estate taxes that cities and states depend on.

A prolonged recession raises the specter of a vicious cycle where companies shrinking in size or reducing their office footprint lead to further declining rents.

Blau says his office properties are all rented, with 100% of tenants paying rent. His concern is not for his commercial real estate holdings, he insists, but for the city life they provide a backdrop for. A prolonged shift to working from home could have dire consequences.

Blau cites the example of companies like Google, which announced it will let employees continue to work from home until at least July 2021. When that happens, he says, temporary relocations can become permanent ones. Apartments lie vacant; restaurants and shops continue to fail.

"Everyone thinks that they're just going to come back here July of '21, or whatever the date might be, and find the city in the same shape it was," Blau says. "And that's just not going to be the case."

As We Return To Work And School During The Pandemic, Can The Air Inside Be Kept Safe?

To that end, he has been working the phones with his tenants — CEOs of some of the most high-profile companies in the country — urging them to get their workers back in the office.

"There's not many people that I know in industry that I have not spoken to," Blau says. "Whether it's finance, media, law firms, private equity, hedge funds ... I feel like it's a little bit of companies' civic duty to return to the office."

Regardless, some companies will opt to keep workers home, or mostly home, until the pandemic recedes. For the well-capitalized, declining commercial rents present an opportunity.

Stuart Saft is a partner at Holland & Knight, a law firm with a large Midtown presence. Six months ago, they were discussing how to reduce their office footprint — fewer private offices and more conference rooms, perhaps having junior lawyers work in a bullpen.

"That lasted until about the third week of the pandemic," Saft says. "When all of a sudden everybody realized people do need to have private offices; we need more space than we have right now."

With Holland & Knight's Midtown lease expiring soon, Saft expects to get a great deal on a new one. "We can't be the only business that's thinking this," Saft says. "Sometimes these things just work out in our favor."

As Journalists Work From Home, Their Newsrooms Are Shutting Down

Of course, only companies with cash on hand can "use the crisis" in this way. In recent months, Facebook and Amazon have signed leases for millions of square feet of office space in Manhattan.

This reveals another common theme in both New York and post-pandemic life: the big getting bigger while smaller players get pushed further out. Manhattan has become increasingly corporate over the decades, and the pandemic may provide an opportunity for that to accelerate. While corporate behemoths may be able to swallow up even more commercial space, younger or smaller companies may have to break their leases or downsize.

If ripple effects play out similarly across retail, restaurants, shops and small businesses, it may mean that when people do finally return to the office one day, they might find the city around it to be completely different.