Accessibility links
President Trump Is Pitching 4 More Years Of A Similar Agenda Republicans readopted the same platform that propelled Trump to the White House in 2016. But GOP divisions and partisanship have ground Washington nearly to a halt. 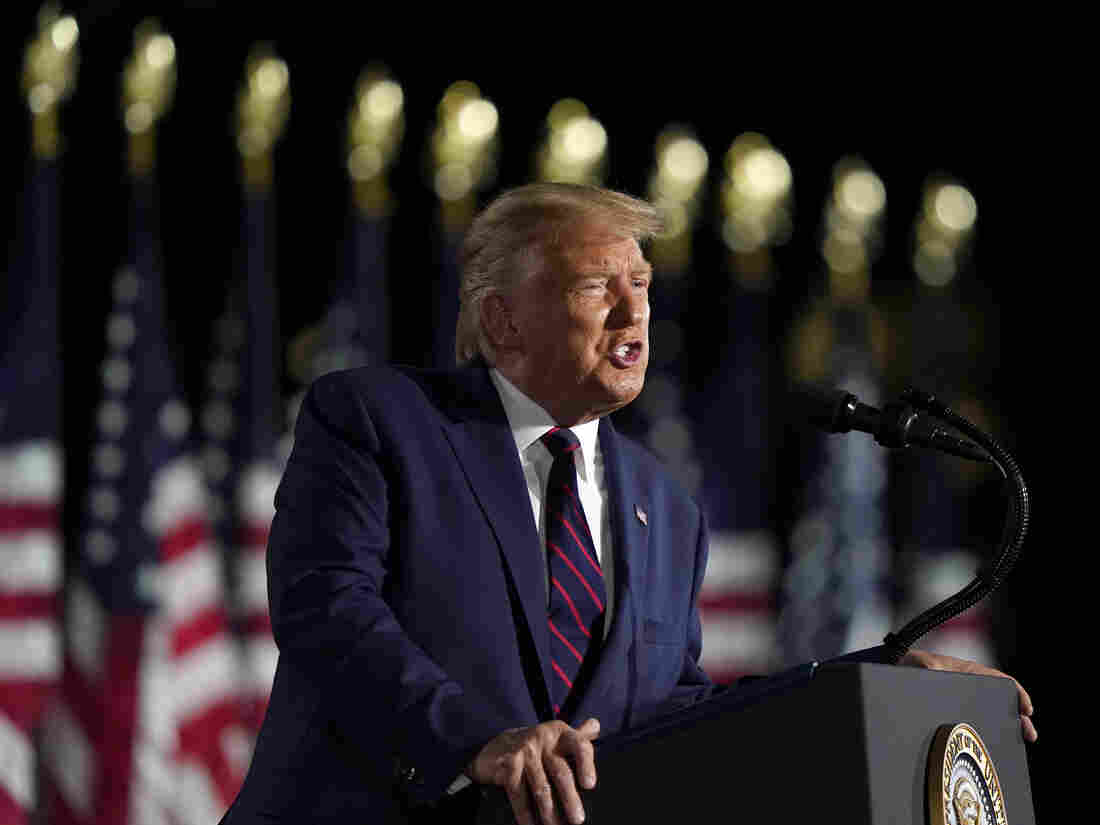 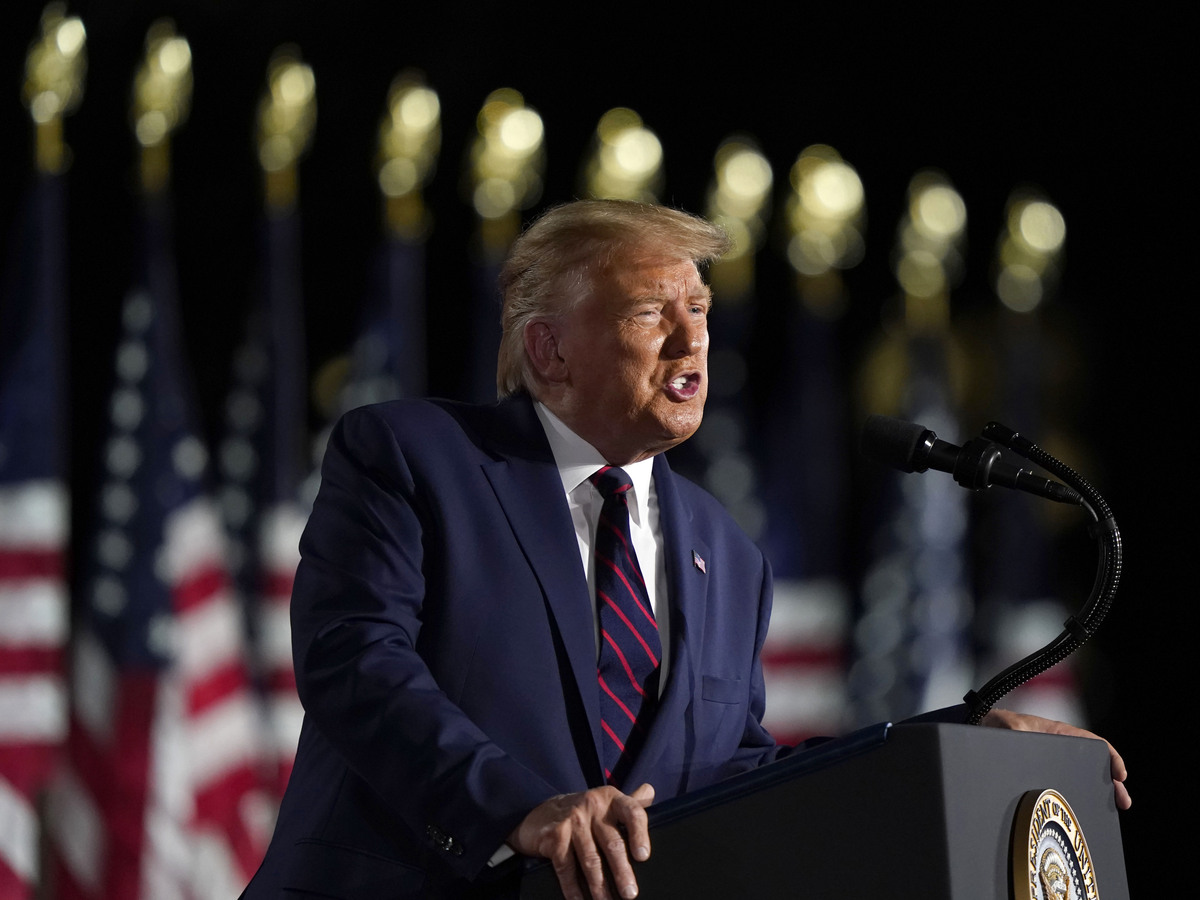 President Trump has promised a second-term agenda that would replicate his first term.

A central promise of last week's Republican National Convention was a pledge that President Trump would use a second term to build on elements of his first term, with very few updates and changes.

The four days of convention programming showed a Republican Party whose policies are bound to Trump. But GOP divisions over many of those policies prevented much of the 2016 Trump agenda from ever becoming law. And that dynamic was in place well before the coronavirus pandemic changed politics.

"This is the unifying national agenda that will bring our country together," Trump said on the final night of the convention in a speech that included sharp attacks on Joe Biden, the Democratic presidential nominee. "So tonight I say to all Americans, this is the most important election in the history of our country."

Republicans started their convention by readopting the same platform that propelled Trump to the White House in 2016. That platform included familiar goals of reforming immigration policy, building a wall on the U.S.-Mexico border, balancing the budget by 2026 and repealing the Affordable Care Act.

"The American people appreciate the fact that he's done what he said," Jordan said in an interview. "You go down the list: cut taxes, reduce regulations, lowest unemployment in 50 years prior to the virus."

Aside from the tax cuts and the updated North American Free Trade Agreement, the majority of the policies Trump now touts were done through executive actions, without agreement from Congress.

Republicans controlled Congress and the White House for Trump's first two years in office. During that time, the Republican Party was at an impasse on most major issues, like spending, immigration, infrastructure and health care.

But Jordan says a lot of those future plans would be made possible with the return of that full GOP control of the White House and both chambers of Congress.

"I feel like he is going to win," Jordan said. "And then I think the real question is, can we take back the House?

But the chances of the Republicans winning the House are slim. And Trump's convention speech — as well as the message from the four-day event — did not focus much on Congress, the House, the Senate or the partnership needed to implement the broad agenda.

One area that Jordan and other Republicans want to tackle is cutting spending.

Republicans Blast Democrats As Socialists. Here's What Socialism Is

But budget experts say that's a longtime GOP goal that candidate Trump embraced — and then largely ignored in office.

William Hoagland, a senior vice president at the Bipartisan Policy Center and a longtime adviser to Republican leaders in the Senate, said the debt and deficit have ballooned under Trump.

"It's kind of perverse that they've even adopted the 2016 platform as the basis for going forward," Hoagland said. "It is terribly inconsistent. But more importantly, on the issues that I'm concerned about from a fiscal perspective, it's somewhat hypocritical."

The deficit grew from $585 billion in 2016 to nearly a trillion at the end of 2019, according to the Congressional Budget Office. That spike is due in large part to policies that Trump enacted before the pandemic, like agreeing to spending increases in negotiations with Democrats and enacting the Republican-led tax cuts in 2017.

And that was before the coronavirus devastated the economy.

Hoagland said he expects the U.S. may have a deficit as high as $4 trillion next year.

"My sense here is that there's a little bit of buyer's remorse that's starting to set in with some of the Republicans," Hoagland said. "And I would like them to get serious about how they're going to address the increasing debt of this country."

But Republicans showed little political will to cut spending, even before the crisis. When it came to spending priorities, Trump was often forced to negotiate with Democrats to marshal enough votes to keep the government funded and avert a shutdown.

Another promise Trump made during the convention is to continue a hard line on immigration.

Garza said he wants to see the two parties work together on legal immigration in a way that addresses the problem holistically — even if it isn't through a sweeping immigration bill that has been proposed in the past.

But Republicans are deeply split on what that kind of reform should involve. Bipartisan immigration talks have repeatedly crumbled in Washington, and a GOP-led effort, as well as various attempts by the White House to float new proposals, has failed to gain support from a majority of Republicans.

The issue has become more complicated in recent months as Trump has defied court orders to accept new applicants to the Deferred Action for Childhood Arrivals program, or DACA, and many congressional Republicans are opposed to reopening that debate.

"If Donald Trump is in office, it becomes or it will remain more difficult to do that," Curbelo said in an interview. "Even with united government, when there was general agreement, it was difficult. Now with divided Congress and this president, it's pretty much almost impossible to advance major legislation."

Curbelo was a Trump critic before he lost his Miami-area seat in 2018. He and Hoagland both say that some of the division within the Republican Party is the direct result of Trump's influence and the departure, either by retirement or through electoral losses, of moderate Republicans interested in cutting deals.

The former Florida congressman says Republicans will have to change if they want to survive in an era after Trump. That involves getting proactive about policies like immigration reform and climate change, which Curbelo says appeal to a younger, broader electorate that may lean more libertarian in their thinking.

"If Republicans want to capture enough of those voters to be a majority party, they have to change," Curbelo said. "They have to grow. They have to evolve."