Accessibility links
In Some Areas, Census Bureau To End In-Person Counting As Early As Sept. 18 The Census Bureau confirms San Diego is among the areas where in-person counting for the 2020 census will end as early as Sept. 18, almost two weeks before the expedited end date of Sept. 30. 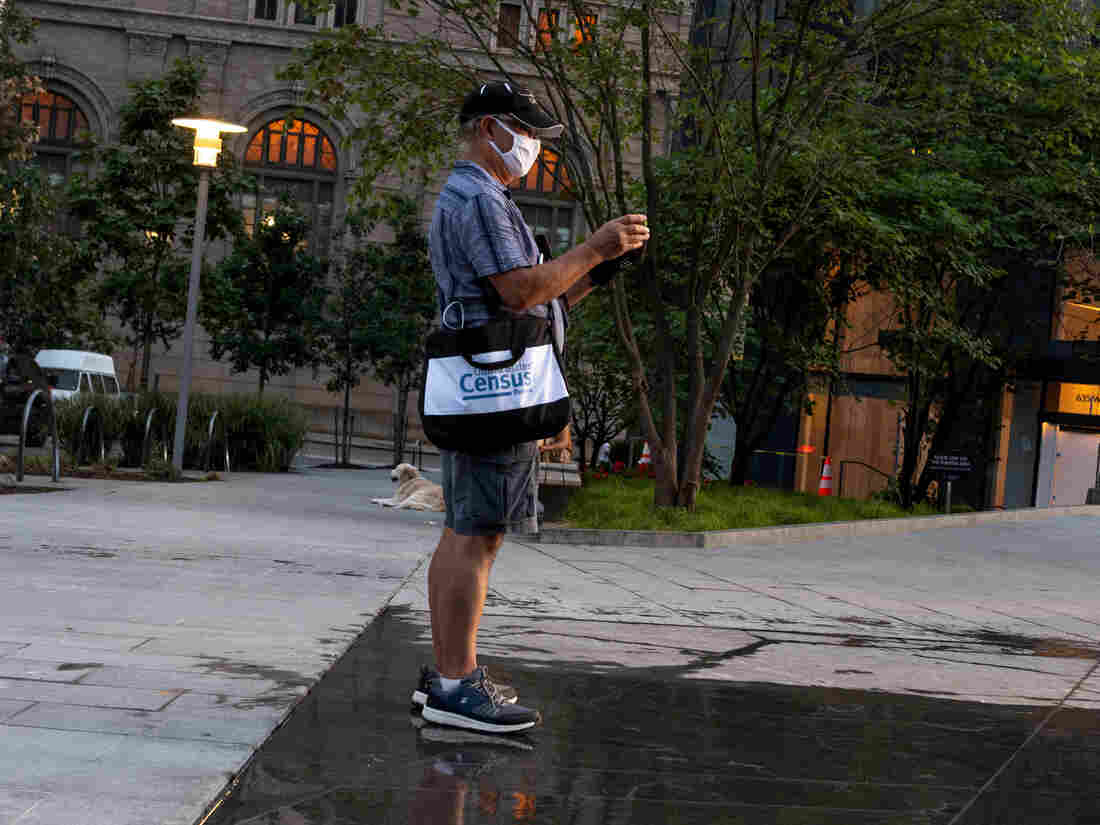 A Census Bureau worker with a face covering stands in a park in New York City in August. The bureau confirmed on Tuesday that door knocking is ending in some areas earlier than Sept. 30. Alexi Rosenfeld/Getty Images hide caption 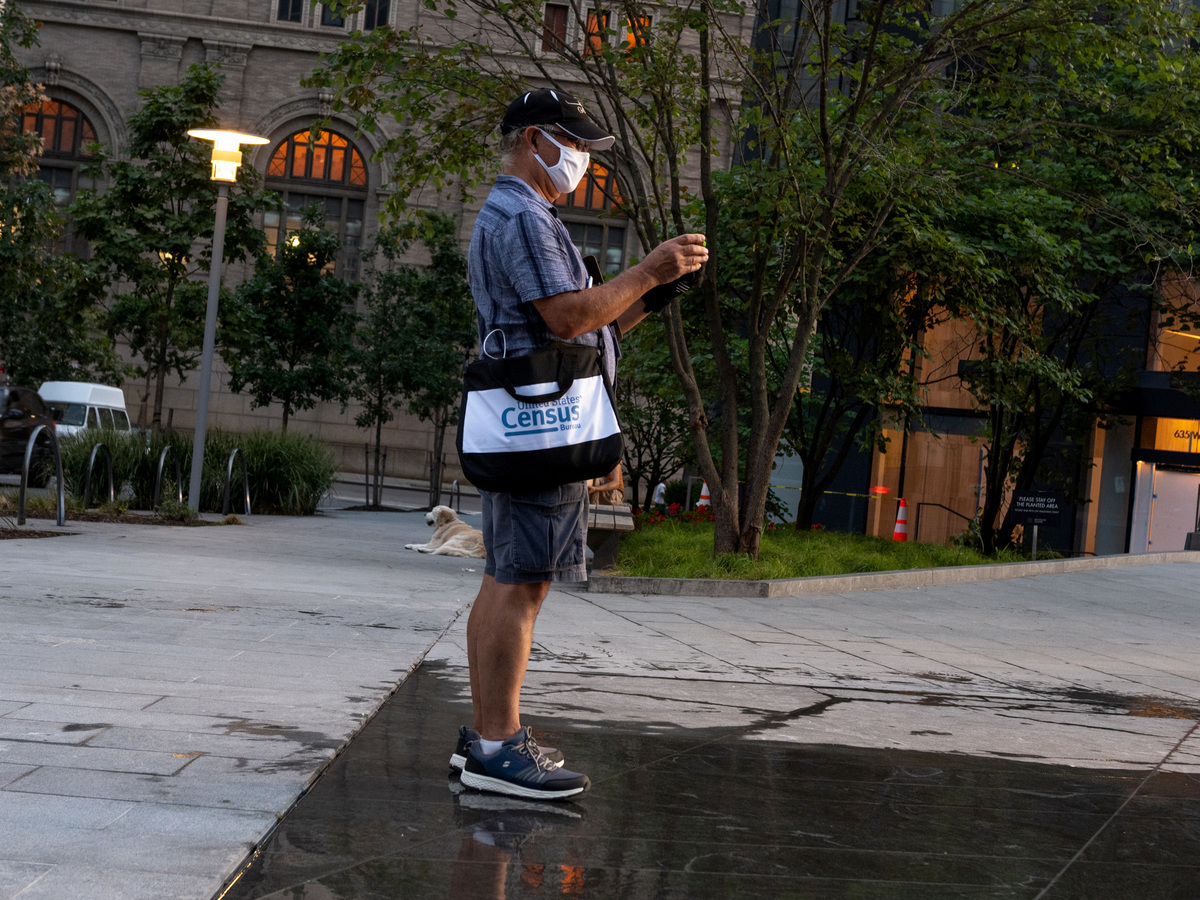 A Census Bureau worker with a face covering stands in a park in New York City in August. The bureau confirmed on Tuesday that door knocking is ending in some areas earlier than Sept. 30.

Facing lawsuits and mounting scrutiny for making last-minute changes that cut 2020 census counting a month short, the U.S. Census Bureau is now ending in-person counting in the San Diego area and some other parts of the country as early as Sept. 18 — nearly two weeks before the expedited end date of Sept. 30 that NPR first confirmed.

"In some areas, nonresponse followup will finish earlier than September 30 - based on the rates of completion, self-response rates and the number of hours our available workforce can work," the bureau said in a statement to NPR.

The local census office for San Diego still has about a third of its door-knocking work to complete in just over two weeks, according to figures the bureau posted Tuesday on its website.

The bureau's public information office has not responded to NPR's questions about which areas besides San Diego, the country's eighth-largest city, are ending in-person counting of unresponsive households before Sept. 30.

Susan Brower, Minnesota's state demographer, told NPR that she was informed by the director of the bureau's Chicago regional office, which oversees census efforts for a lot of the Midwest, that door knocking in Hennepin County, home of Minneapolis, may be complete within the next two weeks.

In a statement to NPR after this story was first published, Tim Olson, the bureau's associate director for field operations, said the bureau is "constantly analyzing their workload and projecting how long it might take to complete the workload."

"When the percentage of households reaches a certain threshold, we actually assign the remaining cases to individual census takers who do everything they can to get a result with all the time they have left," Olson said. "We do not give up, even on the hardest of the hard to reach."

But the bureau's public information office has yet to respond to NPR's questions about what criteria the bureau is using to determine when its door knockers, also known as enumerators, are to be assigned the remaining uncounted households and when they have "finished" their work in an area.

"It's not unusual for the door-knocking operation to end before the scheduled end date for the entire operation. That happens in every census," said Terri Ann Lowenthal, a former staff director of the House oversight subcommittee for the census who now consults on issues related to the national head count. "However, I remain quite concerned about the completeness of the data collection during this phase because there has been so much displacement of people and households due to the pandemic."

Nationwide, households that have not yet participated in the constitutionally mandated head count of every person living in the U.S. can still self-respond online or over the phone through the end of this month, and the bureau has said it plans to process paper forms postmarked by then and received by Oct. 7.

Still, these latest changes to door knocking — a critical census operation that helps ensure that people of color, immigrants and other historically undercounted groups are not missed — are likely to hinder public confidence further in the accuracy of the once-a-decade count.

Recent changes to the bureau's plans, coupled with wavering transparency from the agency, have sowed growing suspicions that the Trump administration is attempting to manipulate the numbers to benefit the Republican Party.

Already sandbagged by the coronavirus pandemic, the bureau has been under pressure from the administration to finish counting by Sept. 30. Commerce Secretary Wilbur Ross, who oversees the bureau, has directed it to prepare the first batch of census results to be delivered to the president by the end of this year as required by federal law.

The administration, however, had publicly supported giving the bureau more time because of delays caused by COVID-19. It made an about-face after President Trump issued a presidential memo in July that calls for unauthorized immigrants to be left out of the census numbers used for reapportioning congressional seats among the states despite the 14th Amendment's requirement to include the "whole number of persons in each state."

The earlier-than-expected wrap-up date for door knocking in the San Diego area was disclosed last month during a public meeting organized by the San Diego Association of Governments.

"This operation in San Diego is scheduled to end Sept. 18," said Roberto Garcia, a Census Bureau partnership specialist for the San Diego region, during the virtual meeting on Aug. 19. "So by Sept. 18, we hope that all of our workload will be complete, and there will not be any more enumerators out on the street."

Garcia's comments were cited Tuesday in a court filing, which references NPR's reporting, by attorneys with the Mexican American Legal Defense and Education Fund and Asian Americans Advancing Justice - AAJC, who are leading a federal lawsuit in Maryland that's trying to force the Census Bureau to return to the extended schedule the bureau developed in response to the pandemic.

The National Urban League is leading a similar federal lawsuit in California, while census advocates wait to see whether Congress will move forward with legislation put forth by House and Senate Democrats that would extend legal deadlines for reporting census results and could give the bureau more time to count and review its results for errors.

Lowenthal, the census consultant, says she is concerned that the local census office for San Diego has less than 64% of its door-knocking work complete, according to figures the bureau released Tuesday.

"This gives me pause as to why the Census Bureau believes it can enumerate the remaining households accurately in less time than it has allowed," said Lowenthal, the census consultant. "I think it is premature to set an artificial early end date for the operation in San Diego, which could suggest to enumerators that they need to move through their caseloads more quickly than they otherwise would."

That, Lowenthal warned, increases the risk of collecting inaccurate or incomplete information about uncounted households that may require more convincing to overcome their distrust of the government.

"It seems to me that this operation should take more time, not less, than in the previous censuses," Lowenthal added.