Accessibility links
Generation Z In The GOP: Young Republicans Reflect On The Future Of Their Party Some young Republican activists are concerned about the future of the GOP. It's now totally defined by President Trump, who is overwhelmingly rejected by their peers. 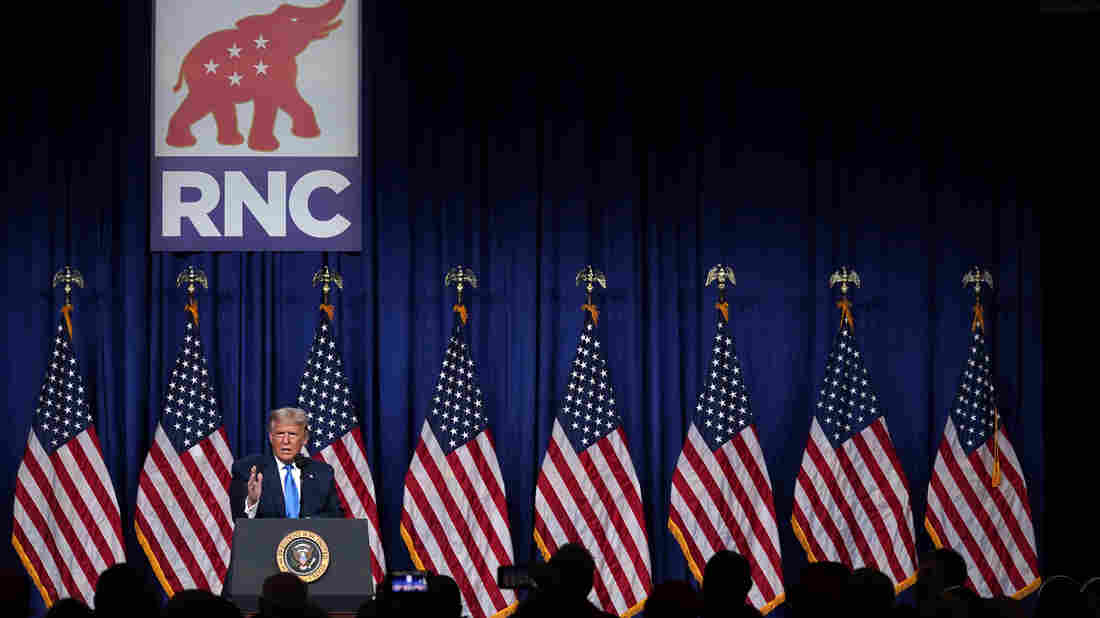 President Trump speaks during the first day of the Republican National Convention in Charlotte, N.C., where he was unanimously supported by delegates for reelection. Many young members of the Republican Party are not supporting him and worry about the future of the GOP, given that it's now defined by Trump. Evan Vucci/AP hide caption 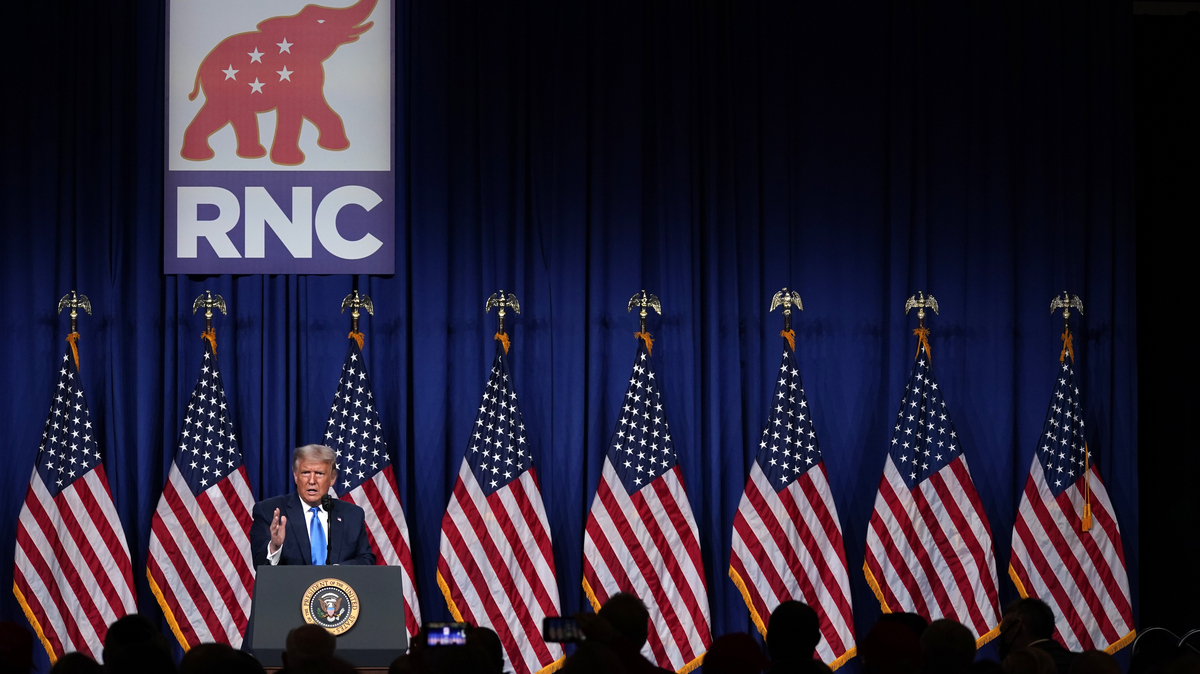 President Trump speaks during the first day of the Republican National Convention in Charlotte, N.C., where he was unanimously supported by delegates for reelection. Many young members of the Republican Party are not supporting him and worry about the future of the GOP, given that it's now defined by Trump.

Lizzie Bond was just shy of being old enough to vote in the 2016 presidential election.

She supported Texas Sen. Ted Cruz during the primary. But when Donald Trump became the Republican Party's presidential nominee, Bond made a different choice: She supported Hillary Clinton's campaign instead.

"You know, it was actually a harder decision to decide who I wanted to support within the lineup of Republican candidates than it was to decide whether to support Donald Trump or Hillary Clinton," said Bond, who is now 21 and a senior at Duke University.

In 2016, Bond joined a group of Republican women campaigning for Clinton, saying that a "character question ... just made it impossible for me in good conscience to support President Trump." She still holds that view today.

Bond, who sits on the board of Republican Women for Progress, has no plans to support President Trump's reelection campaign and said that it's "hard not to think that the future of the Republican Party is doomed."

"The party is failing to speak to people like me who are pretty reasonable. I'm a person of faith, and so the character issues are deeply, deeply troubling to me," Bond said. "Those who are generally more conservative in their policy preferences, the party is really not speaking to us, making decisions a lot more difficult for us. In terms of having the next generation of voters, candidates and supporters of the party, good decisions are not being made to ensure longevity."

While Bond says the Republican Party is failing to reach voters like her, last week's Republican National Convention made clear that Trump and his allies are making a concerted appeal to a new generation of voters.

The four-day affair showcased figures like Charlie Kirk, a co-founder of Turning Point USA, and Madison Cawthorn, who recently won a congressional primary in North Carolina.

"I just turned 25. When I'm elected this November, I'll be the youngest member of Congress in over 200 years," Cawthorn said in his speech. "And if you don't think young people can change the world, then you just don't know American history."

Born after 1996, members of Generation Z tend to lean left like their millennial counterparts. And even among the universe of young Republicans that does exist, research suggests that Trump's appeal with these voters may have its limits.

Research from CIRCLE, a research center at Tufts University, found that nearly 1 in 5 young voters who backed Republicans in 2018 plan to support Democratic presidential nominee Joe Biden this year.

Mike Brodo, a 20-year-old student at Georgetown University, suggested that young Republicans may be turning away because Republicans are not talking about the right issues. He pointed to things like the accepted science of climate change, LGBTQ rights and racial injustice.

Brodo was active in politics during high school but said he became disillusioned when he got to campus and found himself uncomfortable with the level of polarization. He and other young Republicans recently launched gen z gop, a group aimed at reaching disaffected young Republicans.

"I think it came to a point this summer where I said I needed to do something about this," he said. "If we don't fix this right now within the party, we're going to have a problem going forward."

For his part, Brodo said it would take a "complete 180" for him to support Trump's reelection. Right now, he says he's planning to support Biden.

"If Biden can stick to a message that unifies the country, that focuses on the optimism of what America can be, I think that I will likely vote for him," he said, adding that he hopes Republicans keep control of the U.S. Senate.

Many of the young Republicans we spoke with described the surreal feeling of coming of age in this political climate.

Grace Klein, an 18-year-old freshman at Arizona State University, crystallized that sentiment in one memory from a few years back.

Biden: Trump 'Can't Stop The Violence Because For Years He Has Fomented It'

"I still remember sitting in this restaurant with some friends, being like, 'Oh, wouldn't it be, like, the weirdest thing if the race ended up being Trump versus Hillary,' and we were like, 'Oh my goodness, that would never happen. That would be so awful,' " she recalled.

Klein was 13 and 14 during the 2016 Republican primary and watched the debates alongside members of her family, which she described as very conservative. Ben Carson, a candidate that year and now a member of Trump's Cabinet, was one of her role models. She personally preferred Cruz and Florida Sen. Marco Rubio.

She described herself during the primary as "very against Trump," and even during the general election she saw him as the lesser of two evils and said he "rubbed me the wrong way." But four years later, things have changed.

"I'm going to be voting for the first time in November, and I am an adamant supporter. I will 100% vote for him," Klein said.

Klein said that Trump has exceeded her expectations, though there are still things she doesn't agree with. She explicitly mentioned some of Trump's tweets. But she also said that his record and values have helped her look past his "personality flaws."

One issue, she said, was more important than any other in explaining her political identity: abortion.

"I believe that the right to life starts at conception," Klein said. "If a candidate doesn't support that, I will not support them."

Like some of the young Republicans who were concerned about the future of the party, Klein also expressed concern about the level of polarization, particularly on campus.

While she says she has seen left-leaning peers on campus with stickers on water bottles or notebooks that express their political preferences, Klein said that she would be "very, very selective" in public displays of her own values.

"I would be very, very scared for my safety to wear a Trump hat on campus," she said. "I think we've just seen so much of people, whether verbally or physically, just attacking people."

Kerlyn Mondesir, a 19-year-old student at Coker College in South Carolina, said the most important issue for him as a conservative is standing up for the Constitution.

He described himself as a "a Romney, McCain, a slightly Reagan, Sen. [Tim] Scott conservative."

"A moderate-leaning conservative that instead of doing partisan politics, I would focus on bringing both sides together while keeping the founding principles in my rear view so I can go back to them," he explained.

He was initially open to supporting Trump in November. But for now, he said that seems unlikely.

"Every day I teeter the line between Vice President Biden and the Libertarian candidate, Jo Jorgensen," Mondesir said.

And back in North Carolina, Bond is facing the same "difficult decision."

"Being in college at this time as someone who is deeply conservative, who really cares about the future of the party, it's been very hard," she said.

Ultimately, she said it's unlikely that either Trump or Biden will get her vote this fall.