Accessibility links
Space Junk Is Cluttering Up The Final Frontier : Short Wave Since the dawn of Sputnik in 1957, space-faring nations have been filling Earth's orbit with satellites. Think GPS, weather forecasting, telecommunications satellites. And as those have increased, so, too, has space junk. On today's show, we talk about the first mission to clean up space junk and the problem debris poses to sustainability in space. (Encore episode.) 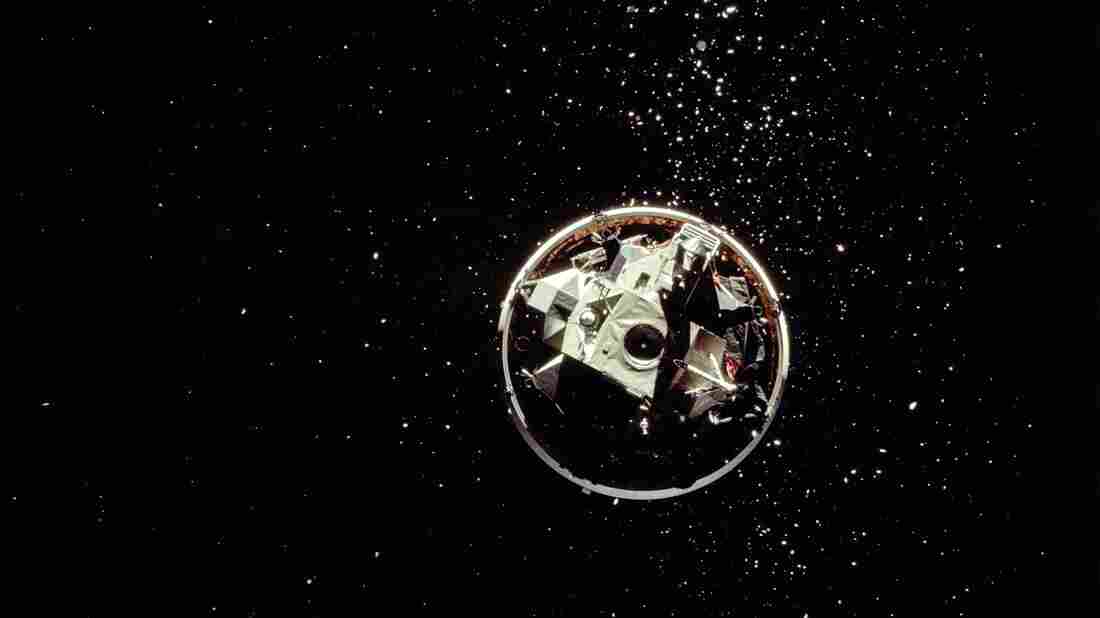 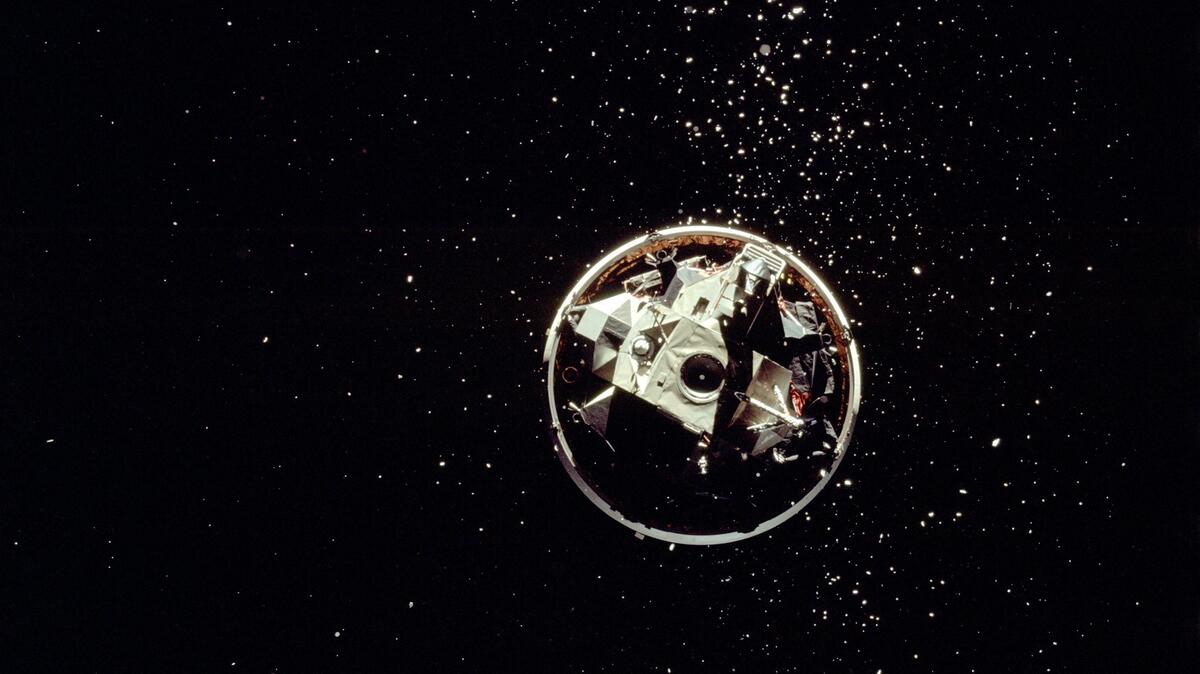 Dots of orbital debris are visible in this image of the Lunar Module Challenger from the Apollo 17 spacecraft, after docking maneuvers. The debris is from the Saturn S-IVB stage separation.

Since the dawn of Sputnik in 1957, space-faring nations have been filling Earth's orbital highways with satellites: GPS, weather forecasting, telecommunications.

Orbital debris, commonly known as "space junk," exists at all levels of orbit, but is especially concentrated in low Earth orbit. Space junk has the potential to damage working satellites and crewed spacecraft, including the International Space Station.

And, the population of space junk is projected to grow, as the commercial space economy continues to expand and more satellites are scheduled to launch.

Picture a band of debris, circling the earth. "[It's] everything from upper-stage rocket bodies, completely intact dead satellites, shards of stuff...flecks of paint, bolts, nuts," says Moriba Jah, Associate Professor at the University of Texas at Austin.

The U.S. adopted Orbital Debris Mitigation Standards in 2001, but there has not been a concerted effort to fund clean-up operations. This worries those concerned about the sustainable use of space.

"This is a tragedy of the commons in near earth space because of a lack of holistic management of this finite resource," Jah tells NPR's Short Wave podcast.

How much space junk exists in Earth's orbit is unknown, but government agencies around the world have crafted estimates.

The U.S. Department of Defense is tracking on over 20,000 artificial satellites — payloads, rocket bodies, and debris. Approximately 90 percent of these satellites are non-operational.

Moreover, their public catalog, Space-Track.org, only tracks objects that are 10 centimeters in diameter at minimum — objects basically larger than a softball.

NASA estimates the population of debris between one and 10 centimeters is about 500,000 objects. The latest models from the European Space Agency estimates that figure is closer to 900,00 objects in space.

How is space junk created?

Satellites generate debris in a variety of ways.

After launch, spent rocket bodies are shed and pieces become unglued. They can cross flight paths and collide with one another. Satellites have been known to explode when unspent fuel is on board.

"Whenever a satellite sheds pieces, they tend to not shed one, but many, many pieces, hundreds of thousands of pieces depending on the type of collision," says Jah.

The movement of these debris clouds is difficult to predict.

In 2007, the Chinese military intentionally destroyed one of their own weather satellites, Fengyun-1C, while testing anti-satellite technology.

Brian Weeden of the Secure World Foundation remembers tracking that explosion for the U.S. Air Force. "In the end, we ended up cataloging more than 3,000 objects. That one satellite turned into three thousand things," Weeden says.

Why is space junk such a problem?

Space junk has the daily potential to alter satellites' operations and movement. This translates into real-world costs, as satellite operators field alerts about potential collisions.

Satellites in low Earth orbit, such as those used for imaging and weather data collection, are especially vulnerable.

"That could mean our climate models are less accurate, or we don't have a good way to track emitters. That could have negative impacts down the road," Weeden says.

Space junk is also problematic for astronauts. The International Space Station is equipped with a tracker to monitor for collision risk. In the past, crews have performed avoidance maneuvers and hid in the Soyuz capsules when the risk for collision was too great.

That scenario provided the staging drama for the 2013 Alfonso Cuarón film, Gravity. The opening scene depicts earth's orbit rapidly filling with debris after a missile strike. That depiction does not capture reality. Space junk is a problem that unravels slowly.

"In the movie Gravity, orbital debris was portrayed as sort of a nuclear chain reaction. The reality is the opposite, where it's like climate change. It's this long, relatively slow accumulation of stuff over decades or longer that results in a really big negative impact down the road," says Weeden.

Mitigating the risk of space junk, Weeden says, involves convincing governments and companies launching satellites that they should change their behavior now, mindful of the future.

Some space junk naturally falls back to earth - one tracked object a day, on average - and either burns up or falls in the ocean. Space junk is very unlikely to fall on your head.

What's being done to reduce and clean-up space junk?

Globally, there are no international regulations for how satellites should operate in space. Each nation implements its own policies, which creates a lack of coordination and accountability in space traffic management.

In 2007, the Inter-Agency Space Debris Coordination Committee (IADC) revised their recommendations for mitigating the risk of debris. Space agencies and governments follow these guidelines voluntary.

As for cleaning up the junk? Remediation technologies have not yet been tested in space. There's been demonstrations with magnets in Japan and deployable nets in England, which took place on Earth.

Their plan is to launch a multi-armed robot in 2025 to scoop up a chunk of old European rocket, a mission estimated to cost $130 million. The debris and the clean-up robot would self destruct upon re-entry into Earth's atmosphere.

Meanwhile, each individual nation is managing the risk that space junk poses to hardware and to human life.

"This is absolutely something that NASA is keeping tabs on — the Chinese space station, all the private space stations that are going up — they're all going to have to deal with this. A fixture of human spaceflight is going to be avoiding debris that could collide with your space station," says Weeden.

The podcast episode was produced by Brit Hanson, edited by Viet Le and fact-checked by Berly McCoy.