Accessibility links
'The Boys' Season 2 Is Even More Twisted Than The 1st The Amazon Prime series returns Friday full of satire, superheroes and subversion. It's a funhouse mirror reflection of the racism, xenophobia, criminality and political posturing of our real world. 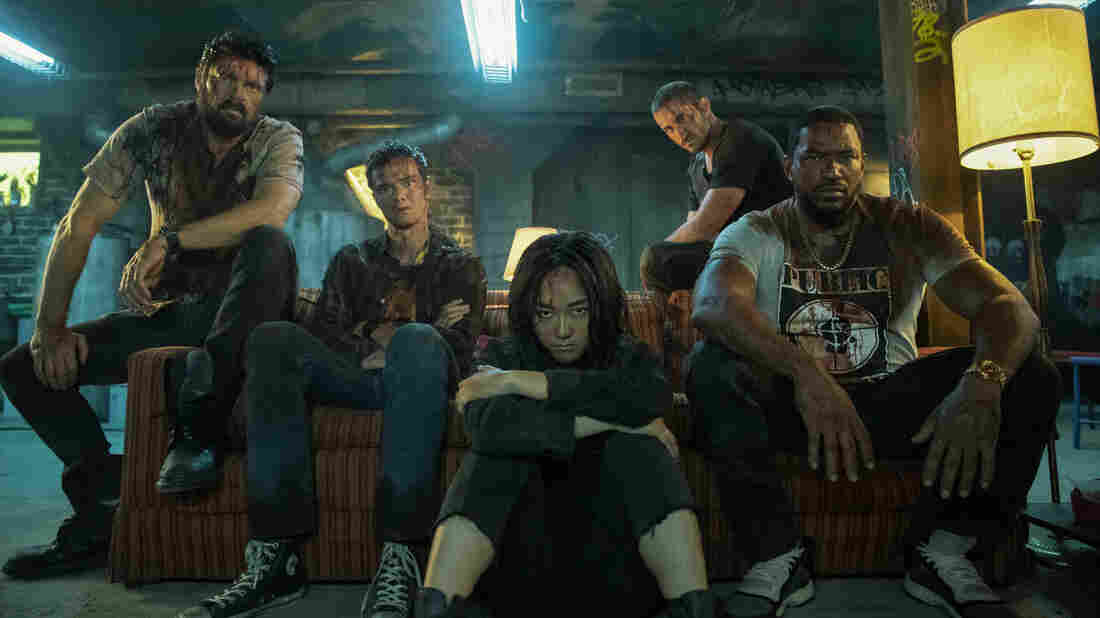 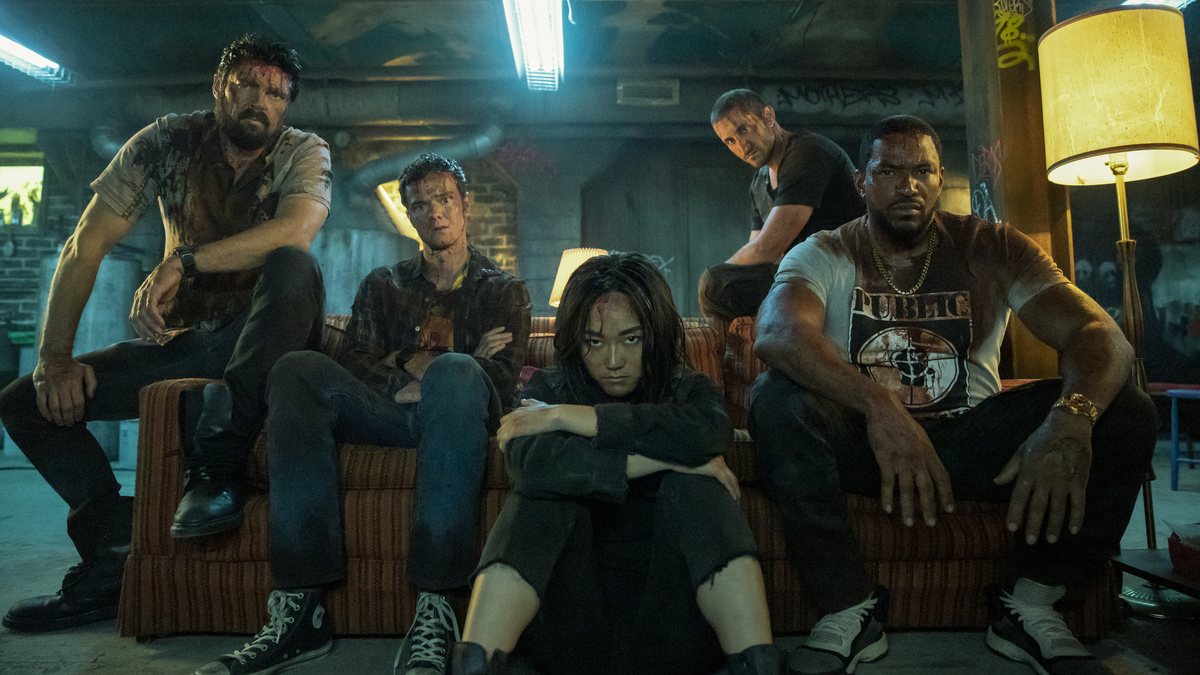 Thanks to the ubiquity of super powered metahumans flying through the air to smash box office records and scoop up Emmy nominations, it is easy for non-geeks to roll their eyes when a new comic book hero-centered project emerges. Not again, you think. We've seen this all before.

But in the case of Amazon Prime Video's The Boys, you really haven't. At least, not how things evolve in the show's more expansive second season premiering Friday, Sept. 4.

This story about corporate created superheroes has morphed from a dark satire of costumed super saviors — centered on a handsome, blond version of Superman who is secretly a merciless psychopath — to an even darker satire of our politically-divided times. At times, it's a funhouse mirror reflection of the horror, racism, xenophobia, corporate criminality and political posturing of our real-life world.

That makes for a wonderfully subversive, cynically entertaining piece of work.

The Boys unfolds in a universe where superheroes are trained and groomed by a corporation called Vought International, which markets them to the public as heroes and monetizes their images. The most powerful heroes are organized into a team called The Seven, led by a Superman-style figure called Homelander. 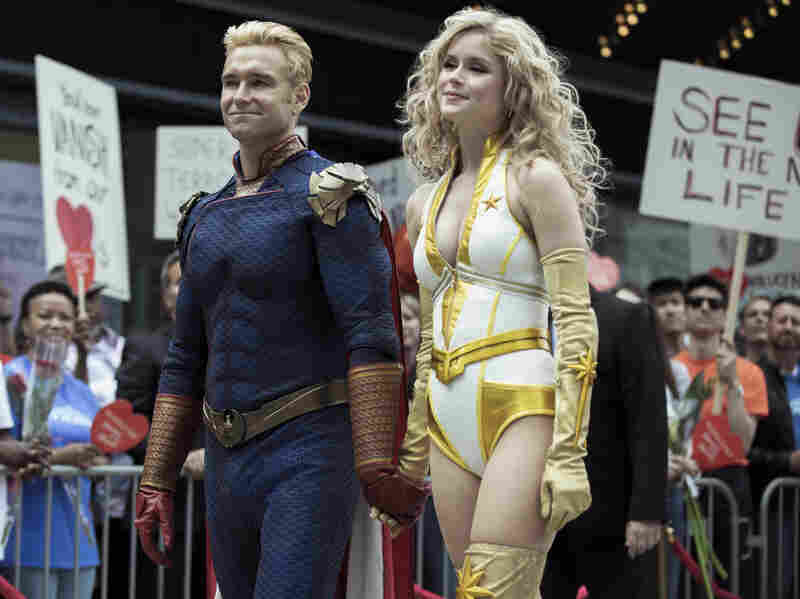 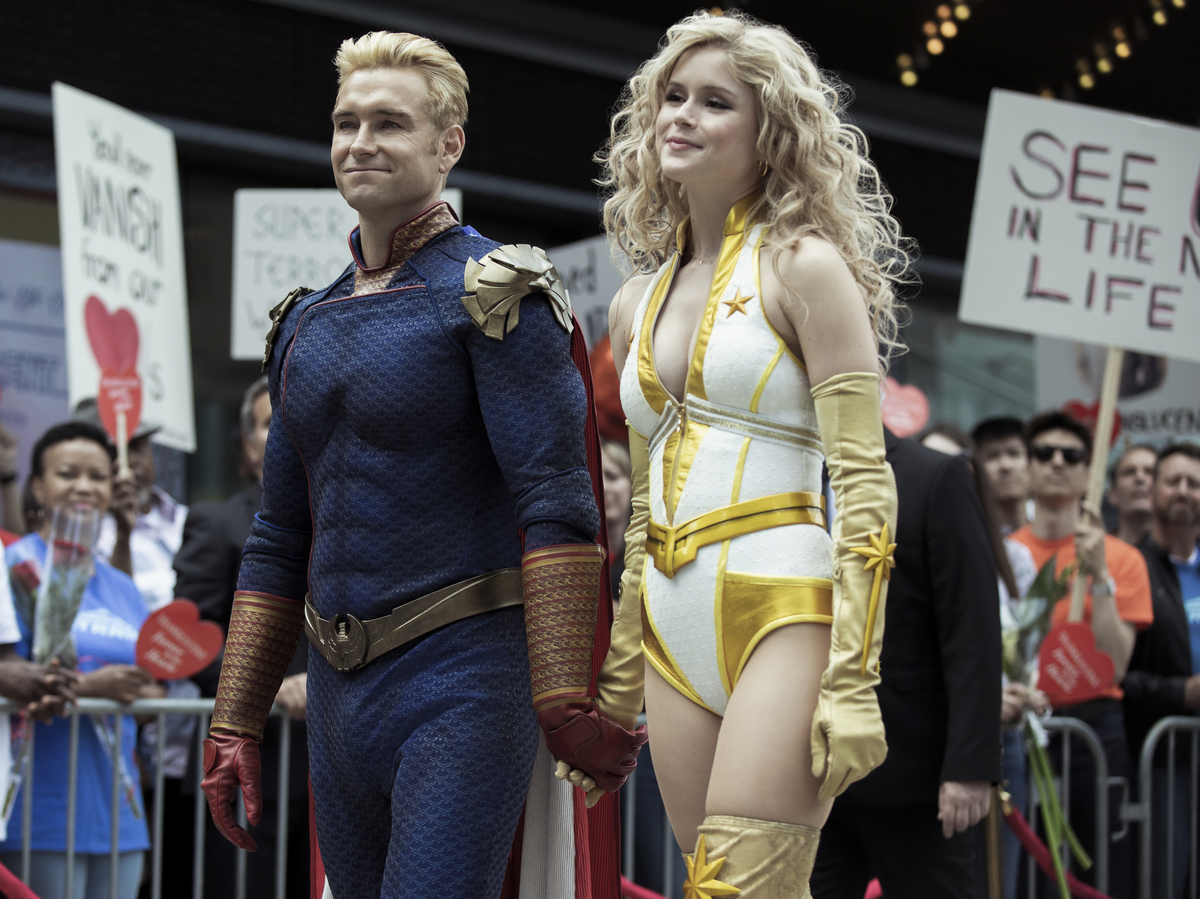 The show's first season revealed a bitter truth: The heroes are mostly fame-seeking celebrities who often abuse their powers in ways covered up by Vought. The corporation wants to earn billions by licensing the heroes to the military — exaggerating a terrorism threat to justify the action.

And a group of mostly regular folks who know what's really going on — "The Boys" of the show's title — are dedicated to exposing Vought. The Boys are led by a former CIA operative (played by a magnetically coarse Karl Urban) who believes Homelander raped and killed his missing wife.

If it sounds brutal, that's because Amazon's The Boys is based on a comic book of the same name by Garth Ennis and Darick Robertson which was explicitly, jarringly violent and sexual. But this second season of The Boys offers a more refined vision, toning down the sexuality of the books to take on media culture, corporatism, a Trump-style plot to exploit fear of super-powered, non-American terrorists and the white-centered nature of superhero stories themselves.

It's centered on a new character, Stormfront, played by Aya Cash (an alum of FX's underappreciated comedy You're The Worst). She's super cynical and irreverent, building a massive public fan base with a combination of savvy social media skills and bold talk about how screwed up the country is. Sound familiar?

Before long, she's whipped up public fears about super powered terrorists outside America, presenting blue-eyed, blonde heroes like Homelander as the solution (I don't think it's a coincidence that Stormfront shares her name with a real-life White supremacist website). And, of course, there's a tie to Nazi scientists and a rapacious, profit-driven pharmaceutical corporation.

The action here is gruesome as the books and then some. One moment, Homelander is casually crushing a criminal's face with his hands and the next minute, a metahuman who can make people's heads explode attacks a public gathering in a scene that feels both gory as a George Romero zombie movie and silly as an Ernie Kovacs sketch.

But the real point here is to unsettle fans used to the unquestioned good motives and bloodless action of classic PG-13-friendly heroes like Iron Man and Superman. It's also a pointed look at the way decades of comic book lore has centered the image of the crusading superhero who uplifts humanity on white characters — and how that desire for a powerful, white American hero to set things right on American terms can lead to awful consequences.

It's also part of a continuing subgenre I like to call the "Gonzo Superhero" style.

These are series and films like Warner Bros. Birds of Prey movie, Netflix's Umbrella Academy, DC Universe's Harley Quinn and Doom Patrol — bursting with adult themes, explicit language, graphic violence, overt sexuality and sophisticated storytelling, tossed at the viewer in a great shotgun blast of sensation. It creates an environment that, at times, mirrors the anarchic spirit of an energetic video game; unpredictable, more in-your-face and more grown up.

It can also feel self-indulgent, encouraging a cavalier attitude about extreme violence that is troubling. No one's angling to get a PG-13 rating on this show.

It's a formula Amazon must like. They already picked up The Boys for a third season before this second season has debuted, naming Supernatural star Jensen Ackles as Soldier Boy, the first super celebrity and the show's twisted version of Captain America.

Watching episodes of The Boys, I am reminded of a quote I read many years ago from a science fiction writer whose name I cannot remember. Paraphrasing him from my sketchy memory, he wrote: Watching a Superman confront ordinary problems is boring, because you always know the Superman will eventually win. But watching a regular person confront a superhuman problem; that's great drama.

That idea could be a mission statement for The Boys, which has made a twisted, telling adventure drama out of the struggle by average people to cope with superhuman challenges — which feels an awful lot like real life these days.