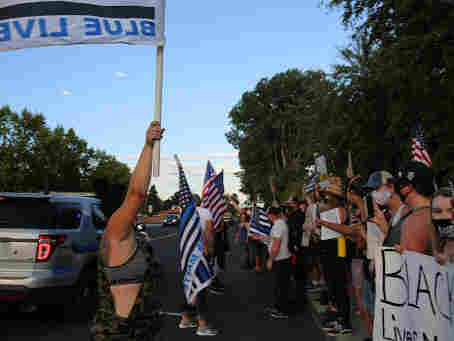 Protesters — on one side, Black Lives Matter and on the other, Trump backers — face off in Prineville, Ore., after a Black woman and the police chief posted contradicting videos about their meeting. Emily Cureton/Oregon Public Broadcasting hide caption

"The reason I did this was because I went to high school here, and I didn't have a good time in the community. I've always been targeted for being Black since high school," Stanfield said.

She remembers classmates throwing food at her or whispering the N-word in the hallways.

A couple weeks after the first Prineville protest, Stanfield met with local police chief Dale Cummins to discuss issues of race and policing. It didn't go well. She posted a video about the meeting on Facebook.

"We were repeatedly told that we are only .8% of the county. Basically, why are we making noise? Why are we asking them to do things when we are the only ones that care?" Stanfield narrates in the June 12 post.

The next day, Cummins responded with his own video on the police department's official Facebook page.

"Josie Stanfield made a video and quite frankly completely lied about the conversation. And the things she didn't quite lie about, she twisted around," the chief said. That video has since been removed.

Stanfield got a slew of threatening Facebook messages. One from June 18 reads: "I promise I will run you over in my lifted Chevy... Don't like it here go back to Africa." 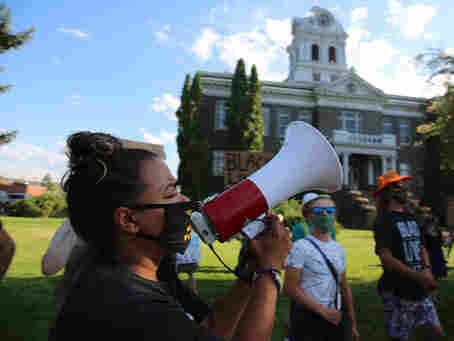 "I spoke to him (via FB) yesterday, and he was apologetic. I don't see that being an issue further," Capt. Larry Seymour replied through the department's Facebook account.

The conflict has now spread offline, into weekly protests in front of the county courthouse. Most weekends this summer, distinct groups faced off from either side of a state highway, as passing engines rev and horns honk.

On a recent Saturday, people on one side of the road held handmade cardboard signs supportive of Black Lives Matter or Stanfield specifically. They chanted: "No justice, no peace," and "Say their names."

More than a dozen members of the Oregon Three Percent Zone 5 militia showed up. Some carried assault rifles and zip-tie handcuffs. The zone leader, Jerrad Robison, said some people from the flag side of the street had asked them to come and keep the peace.

Many townspeople said they were there to protect Prineville from riots. Ken Clark and Brandi Gagnon sat behind a poster reading: "BLM is a RACIST movement... PROVE ME WRONG."

"It's 2020. Nobody cares about the color of your skin anymore. We really don't. Nobody does," Clark said.

"They're terrifying our children with every weekend of blasting off about something that doesn't matter," Gagnon added.

The protests are tense, and violence was just narrowly avoided during at least one event. In recent weeks, police have cited and arrested people after altercations and reckless driving.

These heated confrontations happen across the street from Prineville police headquarters. That Facebook video from the police chief about Stanfield had been viewed more than 39,000 times.

According to him, the video did not violate any department policies.

"I get criticism and that's just part of my job," he said.

When asked whether he had ever before used social media to call out someone by name who criticized him, Cummins replied: "I have never had to."

He declined to discuss details, citing pending litigation. Stanfield's attorney threatened legal action against the city unless it retracted the video.

Until recently, Cummins was in a state leadership role for police oversight, as one of 13 members of Oregon's Department of Public Safety Standards and Training police policy committee, which is meant to uphold professional standards by disciplining violators. He stepped down in August, telling the agency director in an email, "I unfortunately have to focus my attention on other matters at this time."

Speaking broadly, the chief said he doesn't believe systemic racism is an issue for local police and that the implementation of bias training and body cameras are evidence of progress.

"It is almost a little offensive when I hear it, because I don't want to minimize the movement and I understand the movement, but everybody equally matters to us. It doesn't matter the color of your skin. It matters that we do our best to protect you," he replied.

After 10 weeks, the video had disappeared from social media, with no public comment from Cummins. Instead, the city of Prineville posted an unattributed statement on its Facebook page Aug. 21.

It reads, in part, "We, as a community, must continue to have an encouraging and constructive dialogue with each other as we attempt to promote our core values. To further this goal, the City has removed a video from the Prineville Police Department's Facebook page. The video has remained posted in an effort of transparency, but has instead become a distraction to constructive dialogue."

Prineville City Manager Steve Forrester did not respond to requests for comment.

Stanfield, a mother of three, said that she doesn't feel protected by local police and that the consequences of Cummins' video about her go far beyond the unrest happening outside the courthouse.

"I hide in my house. I hide in my backyard. I hide in my front yard. Cars drive by, and I duck because I don't know who's going to see me and where I'm living," she said.

Stanfield described losing some hope through the ordeal. She said that changing people's minds in Prineville is unlikely and that moving the needle would require a total overhaul of the town's leadership, starting with a new police chief.

"I've had so many people say we didn't have racism here until I started the protest."

A previous version of this story misspelled Larry Seymour's last name as Seymore.