Accessibility links
In 'Having And Being Had,' Eula Biss Maps Capitalist Game Rules Without Breaking Them By rooting each meditation in lived experience, the author captures the way the capitalist value system has weaseled itself into the everyday — even implicating herself in its ills and rewards.

In 'Having And Being Had,' Eula Biss Maps Capitalist Game Rules Without Breaking Them

In 'Having And Being Had,' Eula Biss Maps Capitalist Game Rules Without Breaking Them 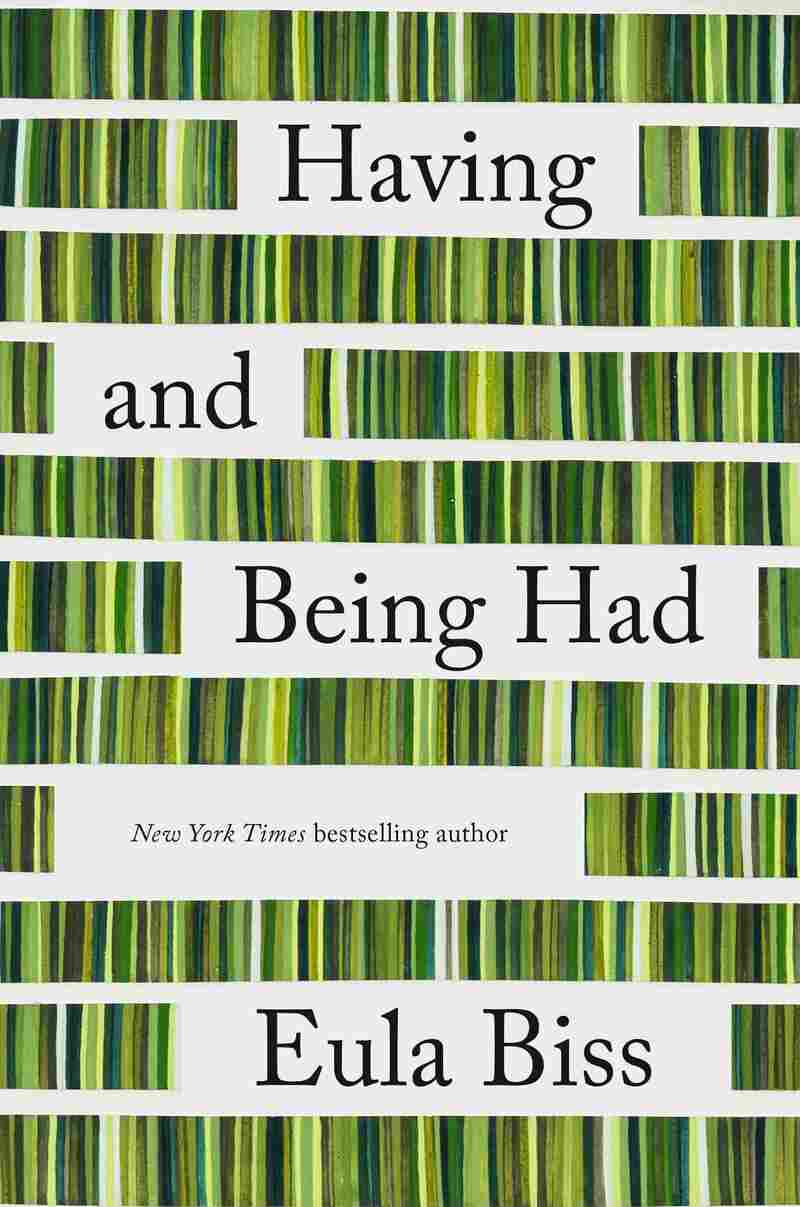 Having and Being Had, by Eula Biss Riverhead Books hide caption 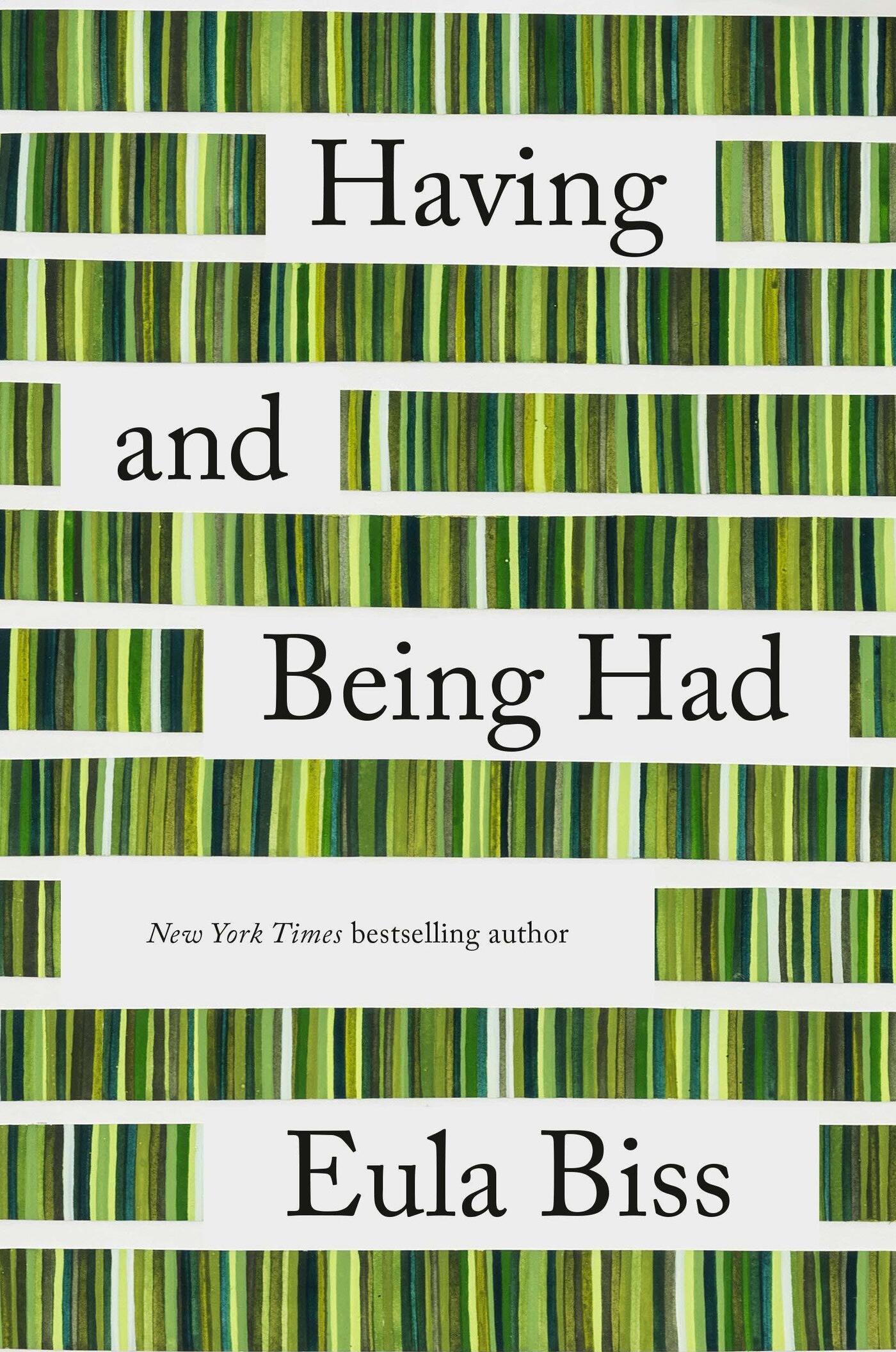 Having and Being Had, by Eula Biss

A few years ago, I couldn't stop thinking about Eula Biss's New York Times Magazine essay "White Debt." The essay is, in a sense, about literal debt—Biss had recently bought a house with a mortgage—but she immediately takes us beyond the prosaic meaning of the word.

The essay begins, "The word for debt in German also means guilt." From there, we hopscotch to what Biss is really in debt for—her white privilege, which she has done nothing to earn, and which is easy to forget, be complacent about, and complicit in.

I kept returning to "White Debt" because I was in awe of how Biss completely reframed whiteness. At the time, I was an adjunct teaching first-year writing at CUNY Baruch College, which made me acutely aware of my white debt. I was a white woman at the head of rooms filled with largely Black, Latinx, and Asian students, many of whom worked while in school and had long commutes from the outer boroughs of New York City.

I themed my courses around race, identity, and narrative, and assigned the Biss essay. We put Biss in conversation with James Baldwin's "Notes of a Native Son," Ta-Nehisi Coates's Between the World and Me, and Claudia Rankine's Citizen. I thought then that it was enough to expose young writers to work that dismantles the narrative of race in America.

If "White Debt" was about the ease of colluding in whiteness, Biss' new book Having and Being Had maps out the ease of colluding in capitalism. Once again Biss uses the purchase of her home north of Chicago—she is a professor at Northwestern University—as a jumping off point. While Having and Being Had does reckon with race, Biss's project here is broader: an inquiry into the American value system of buying and owning, and what we trap ourselves in when we invest in the trappings of the middle class.

Structured in four sections—"Consumption," "Work," "Investment," and "Accounting"—each filled with more than a dozen one-to-three-page chapters, Having and Being Had behaves less like a collection of essays and more like poetry, reminiscent of Claudia Rankine.

In notes at the end of the book, Biss explains that her meditations are built off diary entries that she started when she first bought her house, recording the discomfort in "moments in which I was also enjoying some sort of comfort or pleasure." Biss mines that contradiction, first as she piles up vignettes on objects—furniture, house paint, Pokémon cards—and later by trying to nail down definitions of the capitalist system that gives those objects value, and the work we perform to afford them. Along the way, she reflects on thinkers from Karl Marx to John Kenneth Galbraith to David Graeber, and writers from Emily Dickinson to Virginia Woolf to Joan Didion. (In a note titled "On the Whites," Biss writes, "My pursuit of the meaning of capitalism in this book was motivated in part by the whiteness of the whale.")

Each piece begins in the present tense, dropping the reader in medias res into a scene from Biss's life, followed by associative riffing. Receiving a deluge of catalogs causes Biss to pause at the IKEA catalog's cover message, "Designed for people, not consumers," amused over the "implication that consumers are not people." From there, she explodes the meaning of "consumer," in the same mode in which she once recast "debt" as "guilt"—a visit to the dictionary by way of Graeber: "consumption...was once the name for a wasting disease, and is now the word anthropologists use for almost everything we do outside of work...Consume, he notes, is from the Latin consumere, meaning 'to seize or take over completely.'"

By rooting each meditation in lived experience, Biss captures the way that the capitalist value system has weaseled itself into our everyday. She implicates herself, writing about getting paid $8,000 to allow Walmart to film a commercial in her home and paying her "mother's helper" only $8 an hour. Beyond her frankness, what Biss does so well here is enact an ongoing wrestling with the rules of the capitalist game—to stay in her discomfort, even if only for a page or three at a time, to keep trying to pin it down.

In her notes, Biss writes: "My work on this book was driven in part by the question of whether it was possible, given the game [of capitalism], to play by my own rules." Biss is not a writer who sets out to provide solutions, but the answer that appears to emerge is that it isn't — that is, not if Biss is unwilling to give up the comforts that she has invested in.

The marrow lies in Biss's grappling with what constitutes work, labor, and art, and what she wants from and for them. She is dissatisfied with the bureaucracy of her job at Northwestern, where she has long been an Artist in Residence, a position without tenure that pays $73,000 a year with benefits, more than any adjunct can hope for. She feels her work there interferes with her other work: "the work of writing, the work of research, housework and yard work, and the work of caring for a child." Or really, it interferes with her labor, which she defines via Lewis Hyde: "Work, if we are fortunate, is rewarded with money, but the reward for labor is transformation."

Teaching is transformative, paperwork isn't. Writing feels less like labor but being "in service to the art." And, oddly, she doesn't want to be paid for it.

Toward the end of the book, Biss writes "if I were paid wages for the work of making art, then everything I do...would be subject to the logic of this economy." This presents several conundrums that Biss, for once, does not scrutinize. She is in fact paid for her art, namely for this book (though it is her rule to disclose specific amounts of money, she does not do so for her advance). She would not have her job, nor would she have been awarded a Guggenheim fellowship, were it not for her art. And without that value placed on her art, she would not own a home.

What Biss seems to yearn for is not an alternate economic system with an emphasis on public and common goods, or one that values making art, but what she calls the "gift economy" she lived in as a young poet: "The poets I knew made their money like everyone else, as teachers or bartenders, but what they did for poetry, and for each other, was most often given away."

This made me uncomfortable. I am a writer and teacher of writing who aspires to the kind of investment in my work that Biss has received. I want to be paid livable wages for my work—I jumped ship from Baruch as soon as a private university offered me an adjunct position at nearly twice the pay. Having and Being Had made me question my aspiration for capitalist comforts, yes, but if making a salary and owning a home is not the answer, scraping by and giving away art doesn't seem like a viable alternative.

This discomfort is compounded because of the moment in which this book is arriving, which Biss of course could not have anticipated. We are in a pandemic that has sickened more than six million Americans and killed more than 185,000 thus far, and among the most vulnerable are people working low-paying "essential jobs," people who live in cramped quarters, and Black and brown people—those most beaten down by capitalism. The pandemic has left of millions of Americans unemployed and at risk of eviction, and has revealed the sham of our economy. We are in need of change, of ways to rebel against the system that Biss at one point defines via Graeber as "using money to get more money."

Having and Being Had—which illuminates capitalism for what it is, and records discomfort with it—is a start. But it is enough to dismantle the narrative of the system without pushing for change, both on the individual and larger levels?

As Having and Being Had winds down, Biss' friend tells her, "The only way to end [the book] would be to burn your house down." Instead, she digs a hole in her yard and stands in it.

Kristen Martin is working on a collection of essays that meditates on grief, death, and life. She consults with writers at the Columbia University Writing Center and teaches writing at NYU. Her essays and reviews have been published in The Baffler, Literary Hub, The Cut, BOMB, and Hazlitt.