Accessibility links
First Chinese-Language Production Of 'A Raisin In The Sun' Is Staged In Beijing Lorraine Hansberry's play is about a Black family's struggle against racism in 1950s Chicago. At the Beijing People's Art Theatre, director Ying Da is working to bring that story to Chinese audiences. 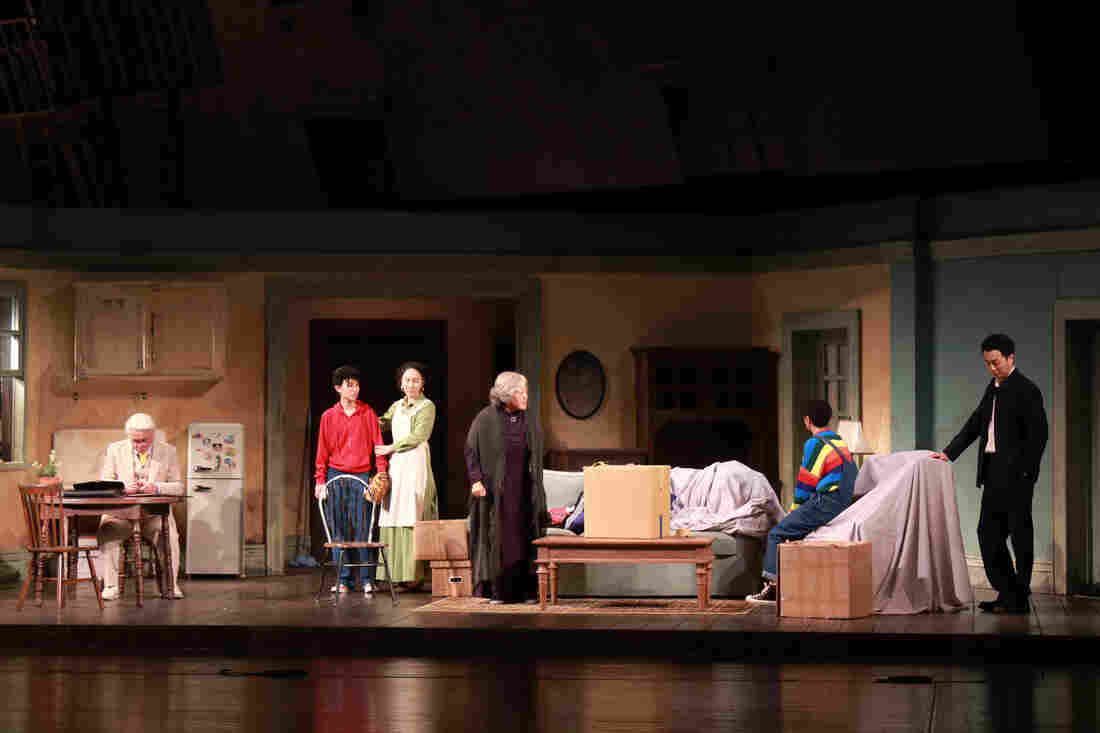 The cast of the Beijing People's Art Theatre production of A Raisin in the Sun rehearse onstage this past August. Amy Cheng/NPR hide caption 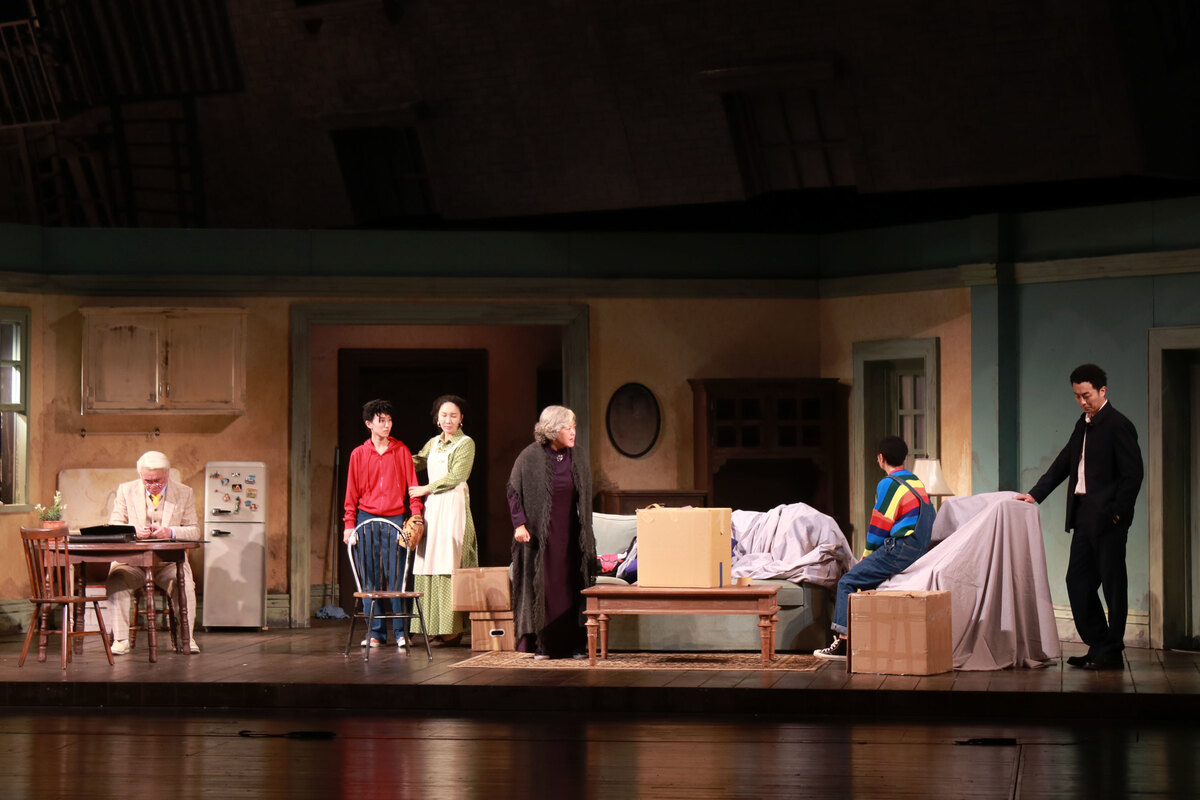 The cast of the Beijing People's Art Theatre production of A Raisin in the Sun rehearse onstage this past August.

A visitor to the Beijing People's Art Theatre this past August would have been treated to an unexpected sight on its wooden stage: Chinese actors, rehearsing A Raisin in the Sun, a play that tells the story of an African American family's struggle against racism in 1950s Chicago.

Beijing actor and director Ying Da is mounting the first-ever Chinese-language production of Lorraine Hansberry's play. The thorniest issue at hand: how to convey to a mostly Chinese audience that an all-Chinese cast is portraying an African American family.

The Chinese theater has historically relied on what American audiences view as blackface to portray characters of African descent on stage.

The first documented Chinese-language production of a foreign play was in 1907 of Uncle Tom's Cabin, the actors in midnight black face paint and curly wigs. Later, Chinese theaters would add chin or nose prosthetics to actors playing foreigners.

Unlike minstrelsy or blackface in the United States, this make up was done as a sign of empathy and realism.

"The aesthetic practice itself is slightly different because the goal for this realistic makeup in China is to as closely simulate verisimilitude and as an authentic kind of representation of a foreigner as possible, even though this is not possible," says Claire Conceison, a professor at the Massachusetts Institute of Technology and an expert on contemporary Chinese theater.

In the past, these different theatrical practices have led to a culture clash.

In 1983, Ying's father, actor and director Ying Ruocheng, helped playwright Arthur Miller to stage his play Death of a Salesman in Beijing. To play the Loman family from Brooklyn in that play, the Chinese actors planned to don blonde wigs and powder on make-up to adjust their complexion.

Miller was horrified. He felt the "realistic stage make-up" favored by Chinese theaters was an ungainly visual shortcut that could alienate audiences. But the Chinese cast — accustomed to using stage make-up to get into character — was at first bewildered when Miller scrapped the wigs.

"Was Miller liberating them from a practice that was outdated and problematic or was he kind of embodying a kind of American neo-imperialism that was grafting our political views and practices?" asks Conceison.

Can stage make-up meant to indicate Blackness be disassociated from minstrelsy and exoticizing racial caricatures? For A Raisin in the Sun, Ying Da consulted his friends and family, many of whom advised him to abandon all forms of stage make-up to indicate the Blackness of the Younger family. He also consulted Harvey Young, a theater historian and dean of the College of Fine Arts at Boston University.

Young points out Lorraine Hansberry's play has long been a theater classic. Does that mean any actor regardless of ethnicity and complexion can play the African American characters?

"Once you become part of the canon, how does that work travel? Are there limitations that need to be placed on a production of Fences or A Raisin the Sun as it moves from the US to Italy to China to Brazil?" says Young. Multiethnic casting in other canonical theatrical works such as those of Shakespeare, Young points out, is already widely accepted.

In the end, Ying settled on lightly bronzing the actors' faces and added wigs full of curls and cornrows. The look is more impressionistic than realistic: it signals the characters' Blackness while simultaneously acknowledging the theatrical artifice. The one white character gets a snow white wig. 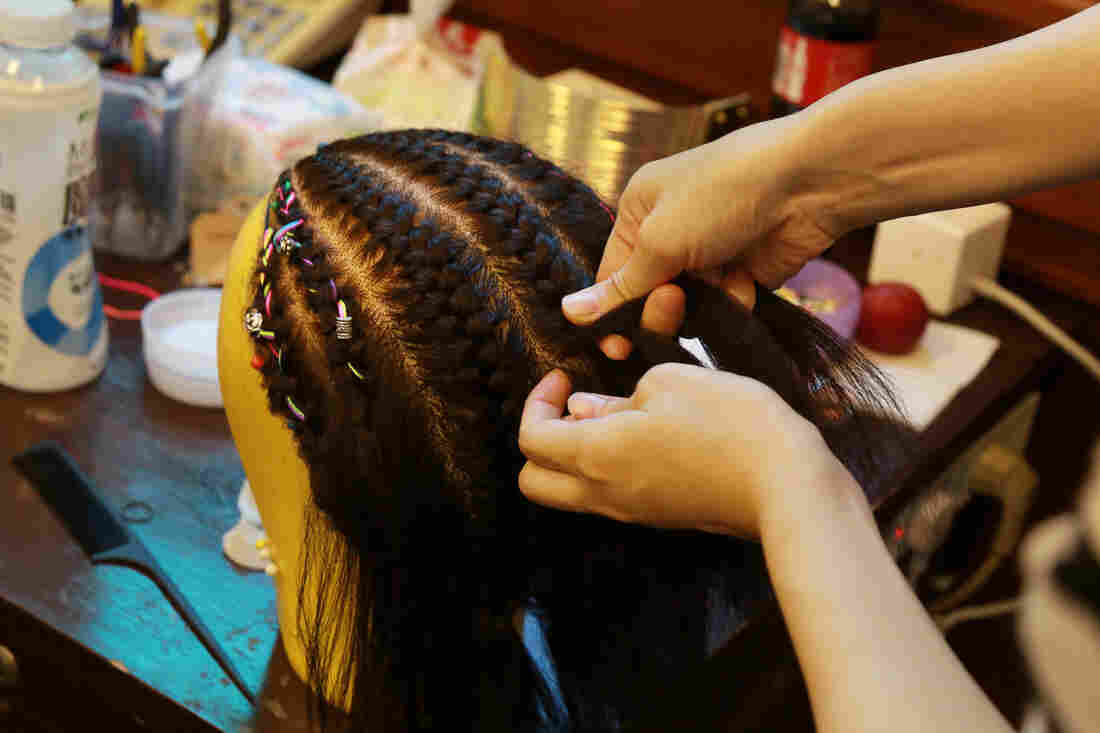 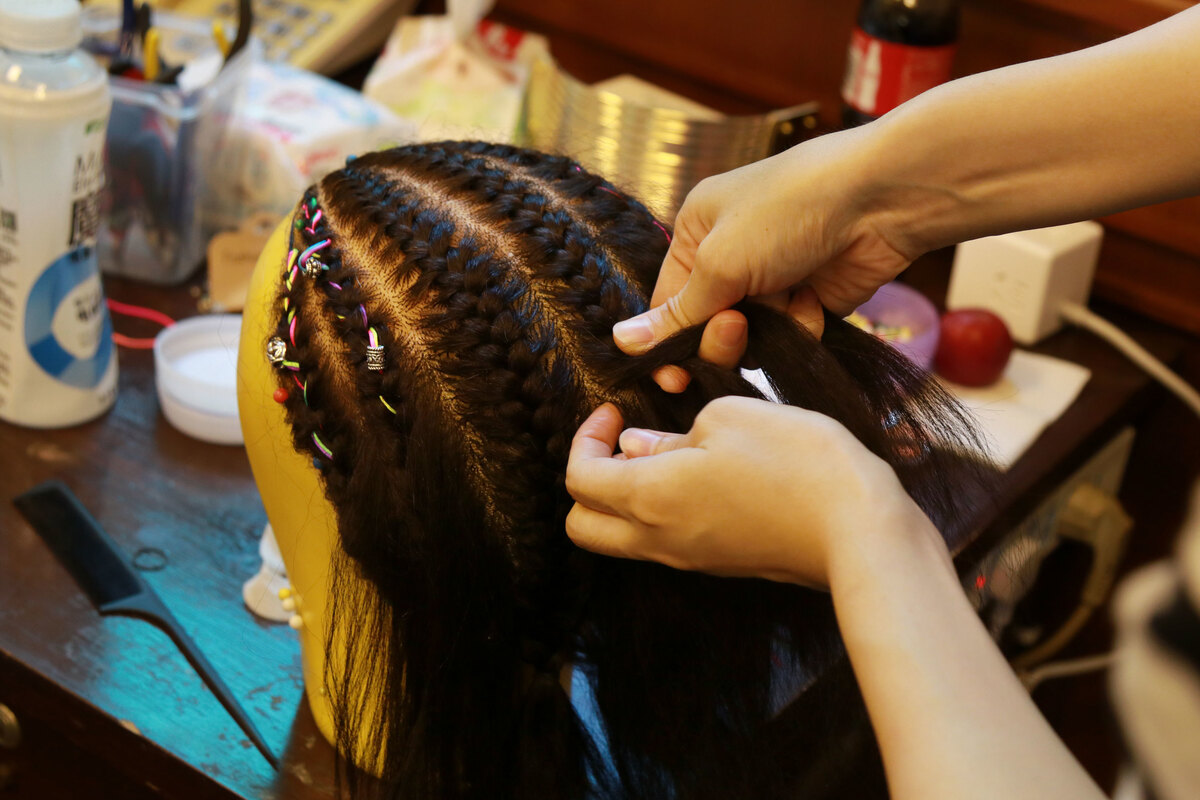 A Record of Racism

China often likes to credit itself with a lack of racism, because the vast majority of its citizens belong to one ethnic group, the Han. However, the absence of substantive ethnic diversity has created specific type of racism rooted in ignorance of the other.

Three months before Ying's production, thousands of Africans living in the southern city of Guangzhou were evicted by Chinese landlords wrongfully fearful that foreigners were vectors for the virus.

China, too, has an ugly record with tolerating diversity in complexion and belief. It has systematically curbed expressions of ethnic identity among Tibetans and historically Muslim ethnic groups and has extralegally detained at least hundreds of thousands of Uighurs, a Turkish ethnic group in China's western region of Xinjiang.

Ying Da is insistent his production's timing has nothing to do with such issues, or with the Black Lives Matter movement or the fury following the killing of George Floyd.

"No!" he exclaims several times, when I ask him about whether the current global discourse about anti-Black racism led him to choose this moment in particular to stage A Raisin in the Sun. "It's not that important here. This is probably a terrible thing to say to Americans."

Ying had planned to stage the play for early this year, but a coronavirus outbreak hit just weeks after they began rehearsal and pushing the opening night to September.

On opening night earlier this month, the theater was only half-full, a result of local regulation mandating theater-goers sit one seat apart from each other, fully masked.

Beijing's production of A Raisin in the Sun begins with a lost script.

Ying Da's mother, the translator Wu Shiliang, loved the play and unbeknownst to Ying, finished a translation of the script in 1963. But soon after, a decade of political turmoil and factional violence called the Cultural Revolution began.

Cultural production ground to a halt. Intellectuals, such as Ying's parents, and civil society members in particular were the targets of a vicious purge and repeated public humiliation. In the ensuing chaos, Wu's publisher soon lost her manuscript.

Then last year, an acquaintance texted Ying: a handwritten Chinese translation of A Raisin in the Sun had turned up at auction in Shanghai, recovered from discarded papers at a Beijing antiques market. The manuscript was signed with characters Ying recognized immediately. He quietly bought the script for an undisclosed sum. A Chinese publication of Wu's translation will be published this year, nearly six decades after she completed her manuscript.

The Chinese translation uses the vernacular from southern Beijing — historically the poorer half of town during dynastic times and home to the palace's craftsmen and artisans — to South Side Chicago in the 1950s. "Because I'm so familiar with my mother's language, with a few words here and there, the order in which she phrased things: you can tell the language is from her," says Ying.

Wu died in 1987, but Ying sees this staging as "my mother's production." 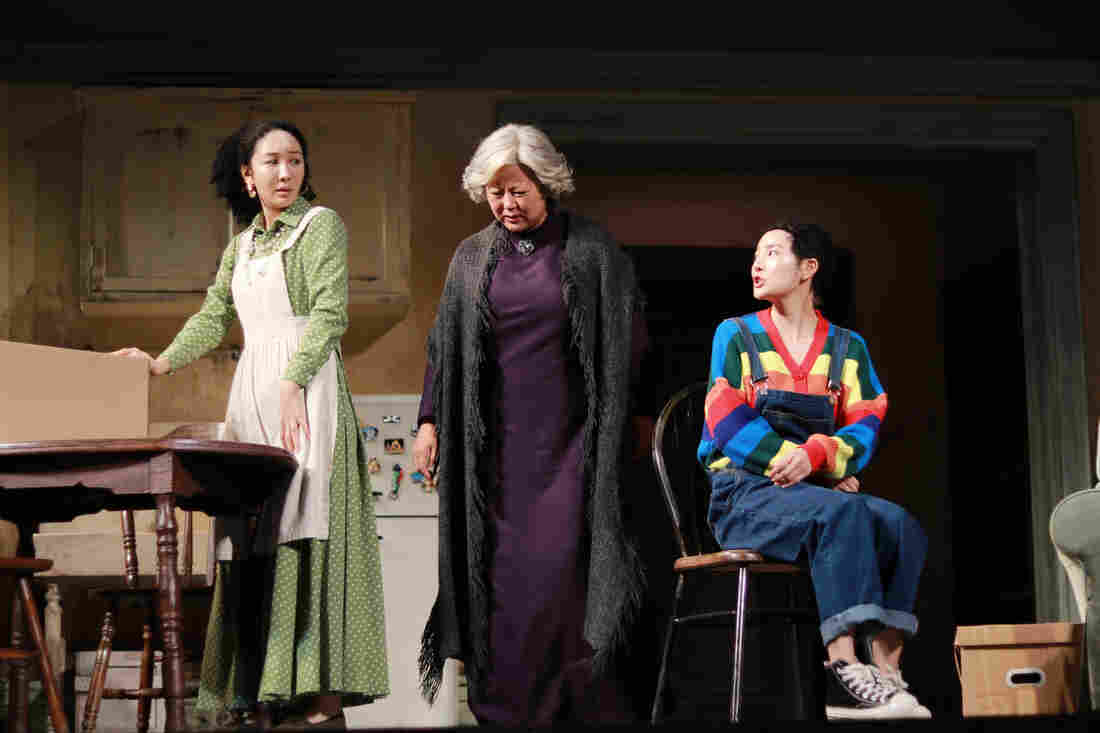 Xu Jingyao as Ruth (from left) Wang Qianhua as Lena and Xu Cenzi as Beneatha in A Raisin in the Sun. Amy Cheng/NPR hide caption 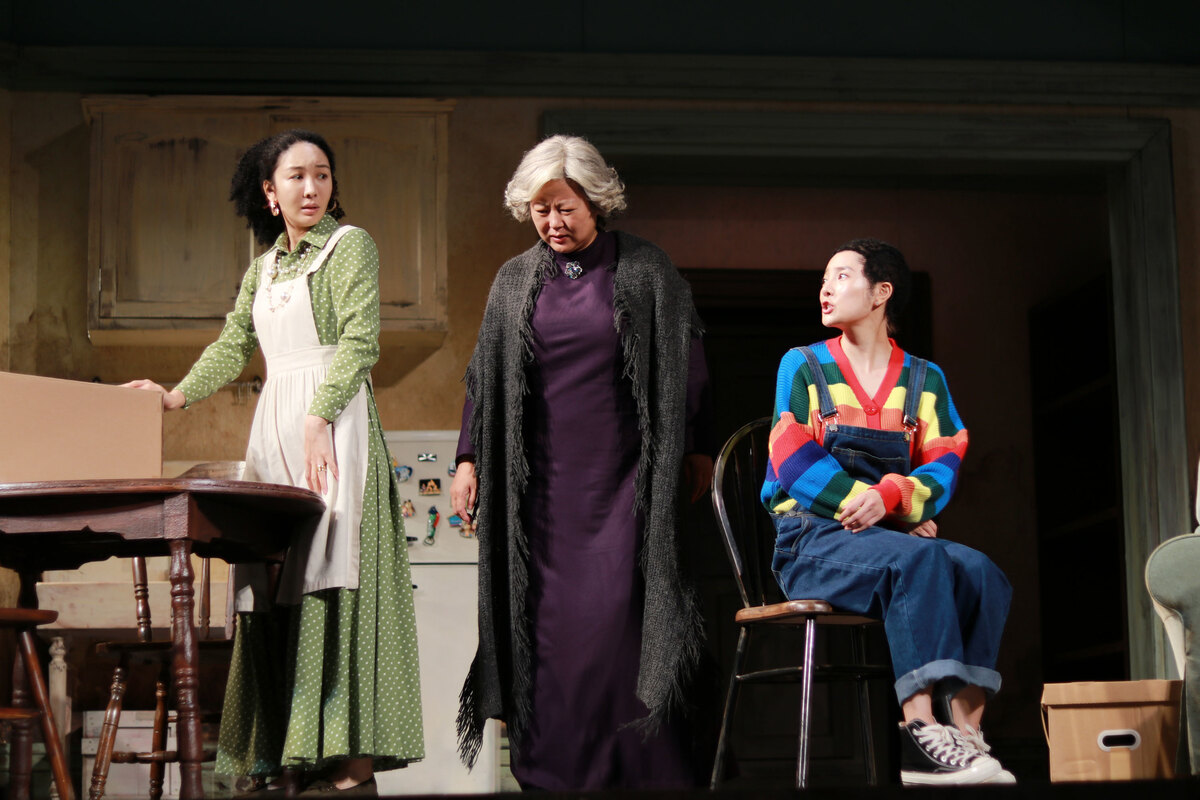 Xu Jingyao as Ruth (from left) Wang Qianhua as Lena and Xu Cenzi as Beneatha in A Raisin in the Sun.

'A negro play before anything else'

Asked in 1959 about whether her renowned play A Raisin in the Sun was written in order to be universally relatable, playwright Lorraine Hansberry replied firmly in the negative. "In order to create the universal you must pay very close attention to the specific," she patiently explained. "It's definitely a negro play before anything else."

But the power of Hansberry's play is also in its ability to evoke timeless themes audiences around the world can relate to, says Ying: "A play is to let the audience feel what they already feel but do not know how to say it."

Instead, in Ying Da's staging of A Raisin in the Sun, it is themes of class inequality in south side Chicago in come across sharp and clear in his mother's south Beijing accented-Mandarin.

"We want to act out the essentials of human nature — the yearning for freedom, happiness — that do not differ between race and nationality," says Xu Jingyao, who plays Ruth Younger, the play'smother, struggling to raise her family in a cramped Chicago apartment.

But she also says the specificity of Hansberry's writing and Wu Shiliang's translation give Chinese audiences access to 1950s Chicago: "I could immediately understand why we need to abandon racial and class oppression. Though that oppression is what gave rise to this play and also gives it its power."

The actors also say their make up and costumes let them access an unfamiliar identity.

"Acting is a little like putting clothes on; slowly getting into the skin of your character, filling your heart with the character's soul," says Wang Ning, the actor who plays Joseph Asagai, the Nigerian exchange student who becomes enamored with the Younger family's youngest daughter, Beneatha. 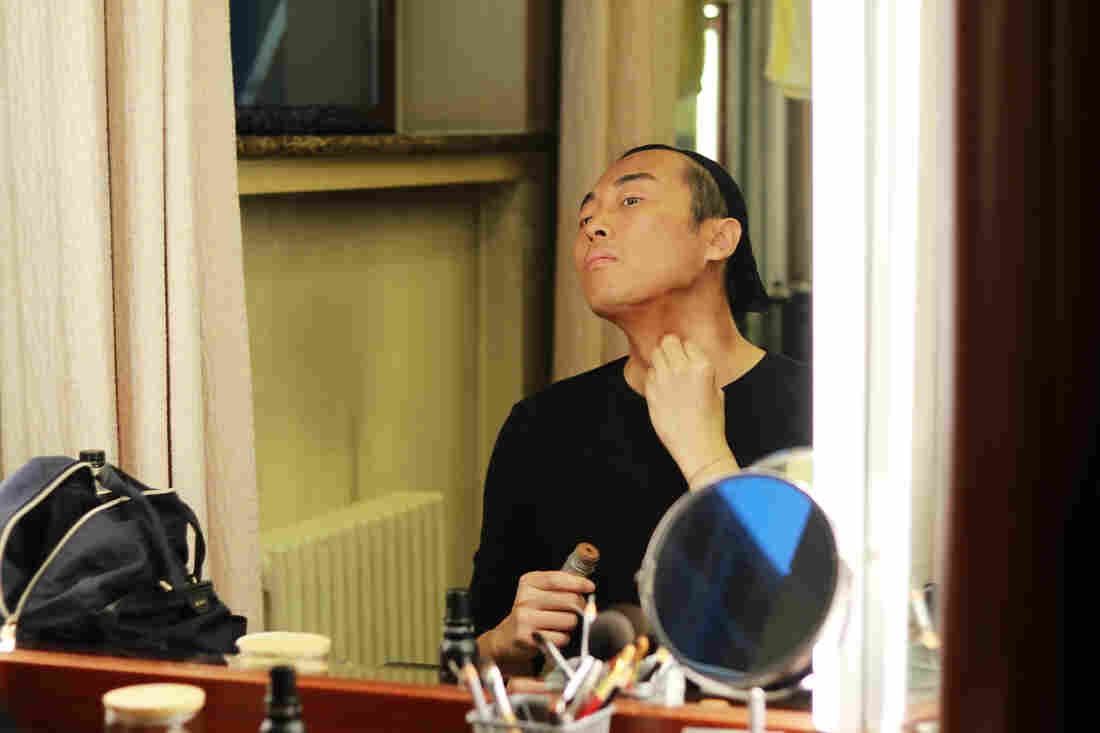 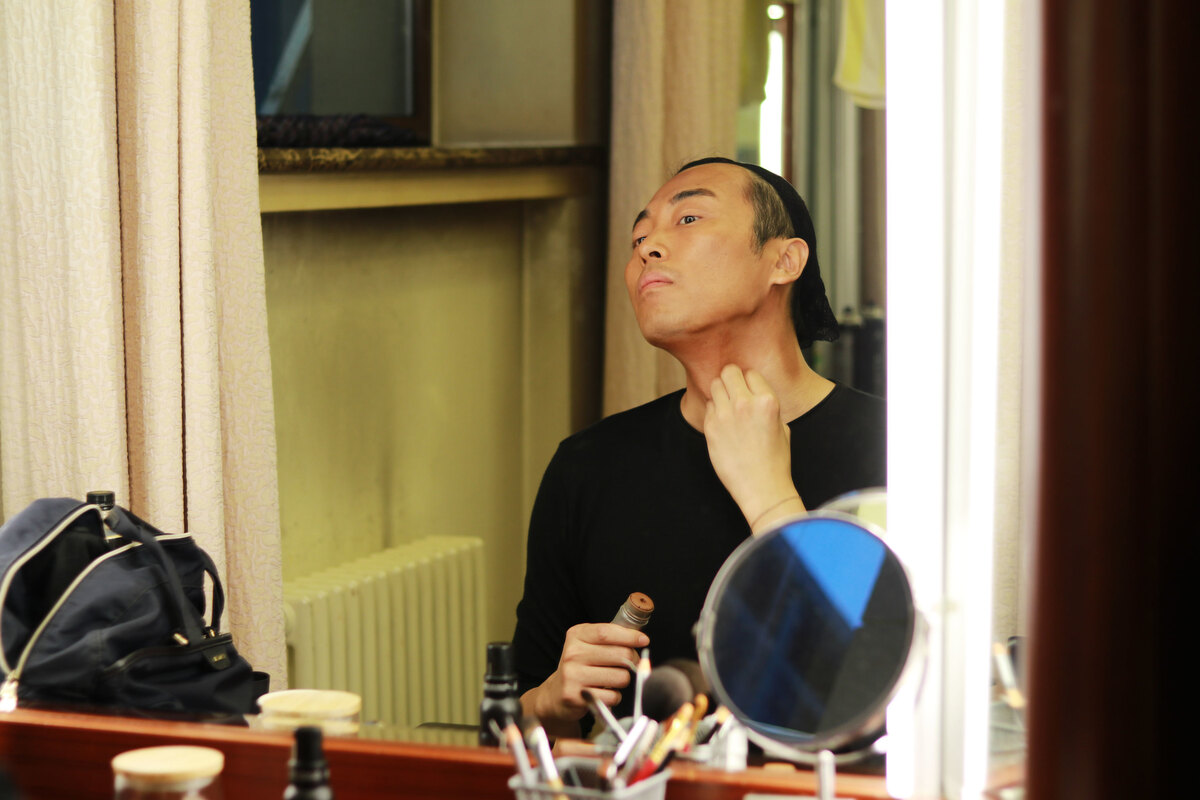 Actor Jin Han, who plays Walter Lee Younger, powders on dark stage make up on opening night of the production on Sept. 1.

To feel closer to his character, Wang says he chose to perm his own hair into a curly fuzz rather than wear a wig.

Right before a performance, Jin Han, the actor playing Walter Lee Younger, the play's ambitious father, examines himself in the mirror in his wig and stage make up.

"In that second, you suddenly believe, I am that person! That's when I charge onstage," he says with a grin.

There, Chinese audiences might momentarily understand the triumphs and travails of an African American family so different yet so similar to themselves.

An earlier Web version of this story incorrectly stated that at least hundreds of Uighurs have been extralegally detained by China. In fact, it is at least hundreds of thousands of Uighurs. And in the audio version of this story, as well as in a previous Web version, Harvey Young is mistakenly referred to as the dean of the College of Fine Arts at Boston College. He is a dean at Boston University.