Accessibility links
How To Build A Diverse and Equitable Workplace : Life Kit You might've heard the phrase "workplace diversity" in recent months. If you're a leader in your workplace — especially if you're white — this episode is for you. Here are some actionable steps to take to make your organization more equitable and inclusive. 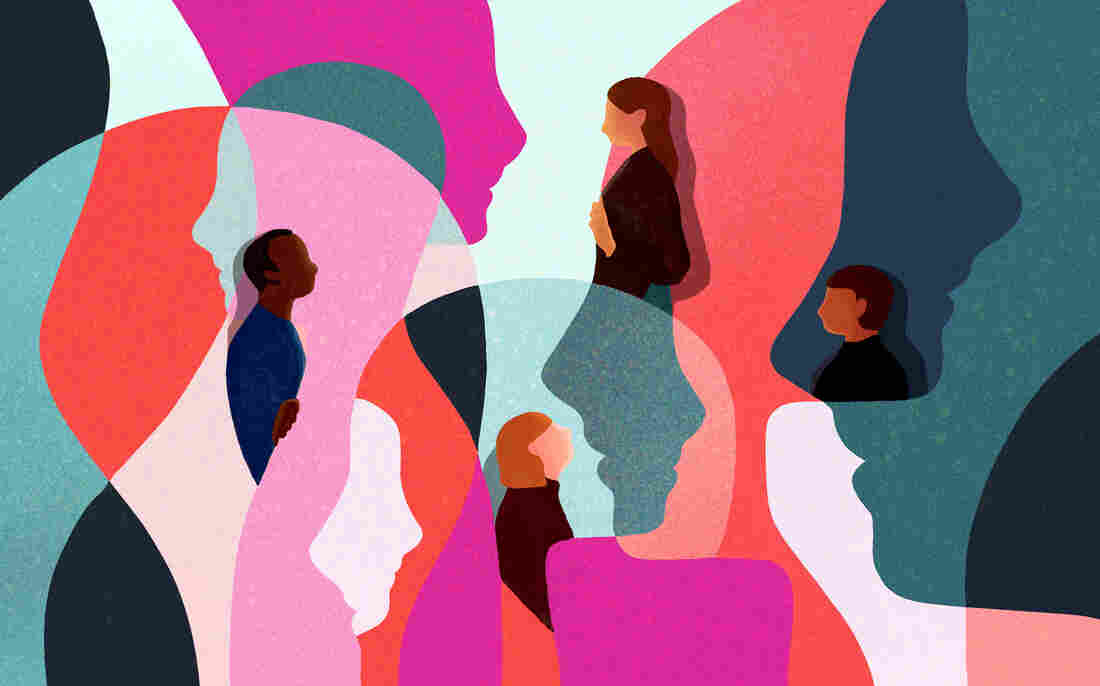 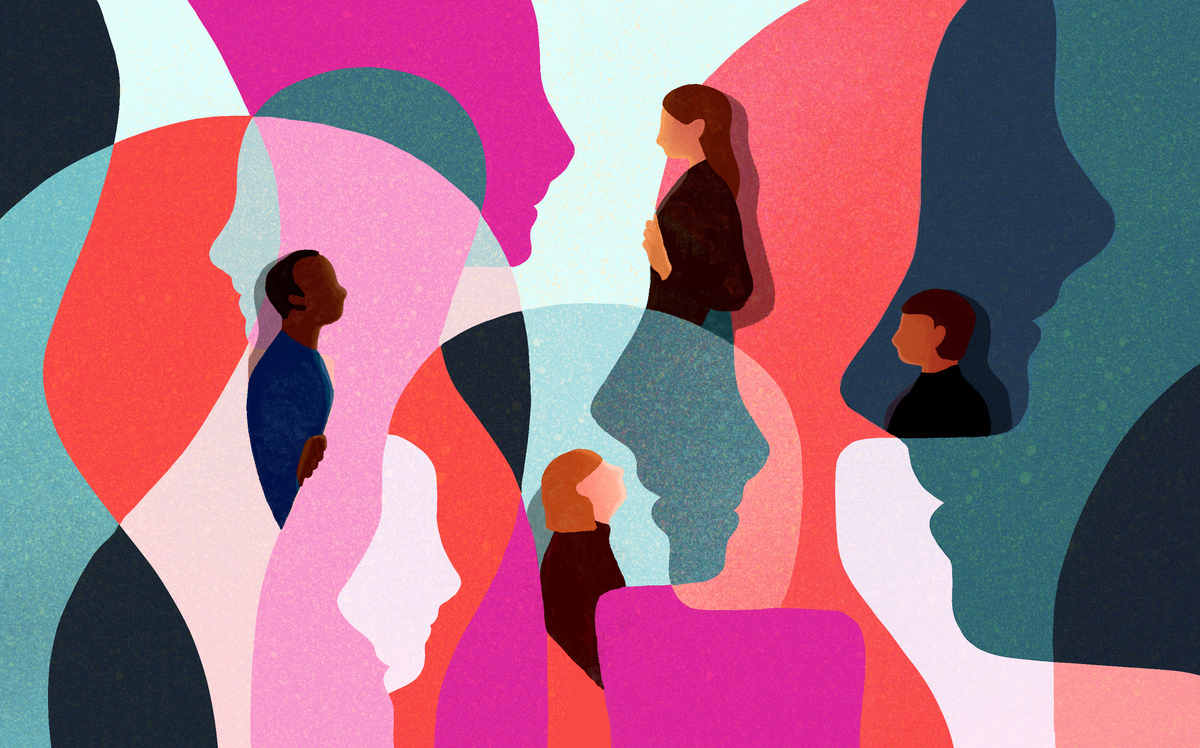 We're in the middle of a nationwide reckoning over race. One thing that's come up a lot in that conversation is workplace diversity.

After the police killing of George Floyd, companies from fast food chain Shake Shack to bidet company Tushy published statements condemning racism, stating they were committed to creating racially equitable organizations. But there is a difference between performative and active allyship.

"It's really toxic when you have people of color inside your workplace who see those public statements. And yet they feel the pain and the hardship of being a person of color in said company," says Minda Harts. She's founder and CEO of The Memo, and author of the book, The Memo: What Women of Color Need to Know to Secure a Seat at the Table.

The Right Mentor Can Change Your Career. Here's How to Find One

For years, the numbers have told the real story. The human resources consulting company Mercer found this year that across industries in the U.S., Black and Latino populations are underrepresented at every career level above support staff.

Black and African American employees make up 12 percent of support staff roles, but only two percent of executive level positions. While almost half of U.S. organizations have publicly committed to racial or ethnic equality efforts, only 13 percent of these companies offer programs specifically for women of color. 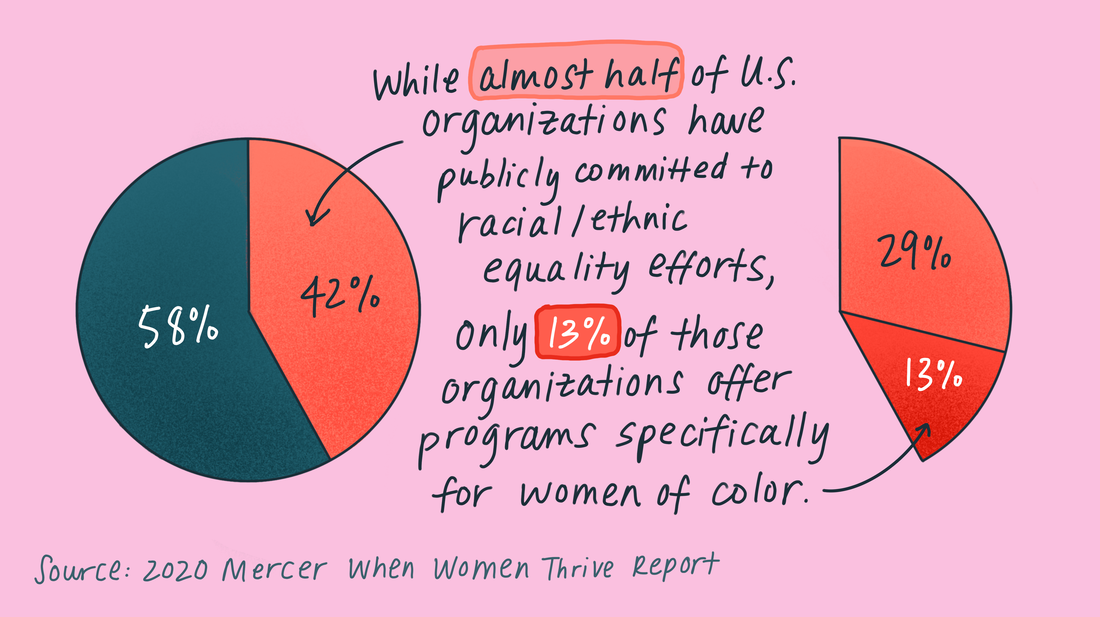 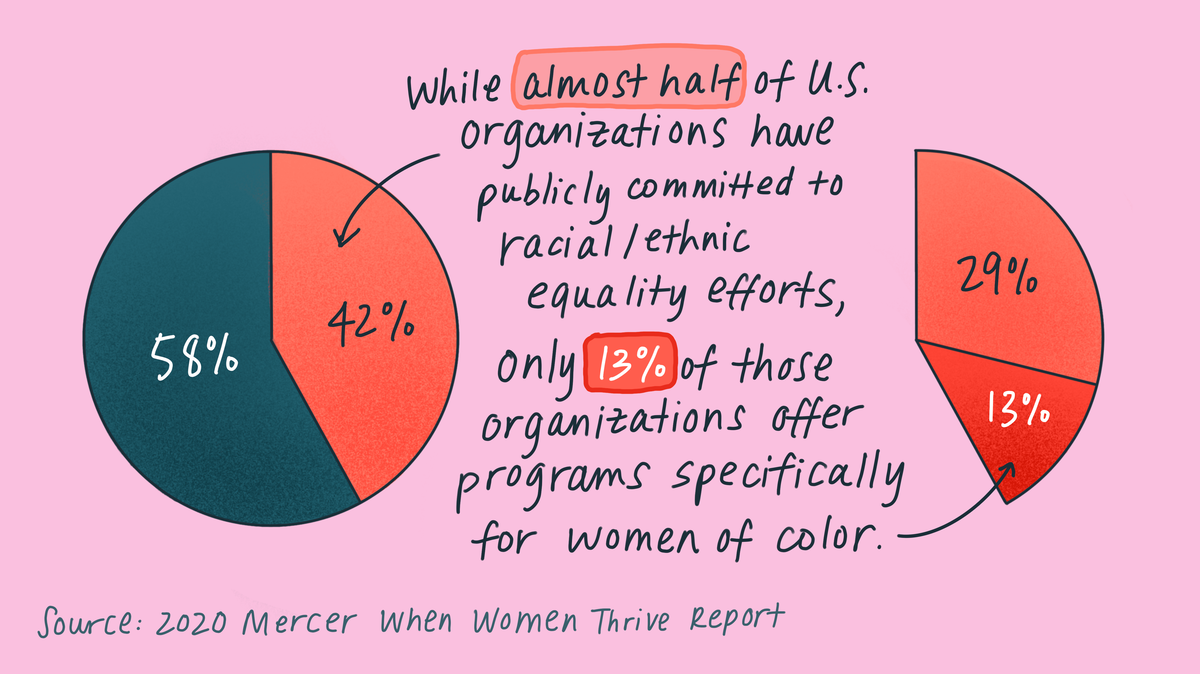 So what do leaders and managers really need to do to implement long lasting workplace diversity?

Companies should stop telling employees that they should assimilate to existing company culture in order to succeed, says Michelle Silverthorn, the founder and CEO of Inclusion Nation and author of the upcoming book, Authentic Diversity: How to Change the Workplace for Good.

Silverthorn says the numbers have stayed the same because the workplace is still set up to benefit white men.

"Unless we are willing to dismantle those structures and put into place systems that are actually equal and actually fair," Silverthorn says, "They are going to stay the same way that they have always been since, like, the 1920s."

NPR's Anjuli Sastry spoke with Silverthorn and Harts separately to get a better understanding of how managers — especially white managers — can hire and support diverse employees in their companies.

How does the hiring pipeline and recruiting factor into all this?

Silverthorn says it's a huge problem that many companies only recruit from the same pool of universities. "We keep on saying, 'Oh, the pipeline is broken,' but it's not broken. You're just looking in one place," she says.

Some organizations turn to their employees of color to recommend friends or people they think would be good job candidates. But, Harts says, that's not the solution either. "We can't continue to put the burden on our employees of color, because success is not a solo sport." 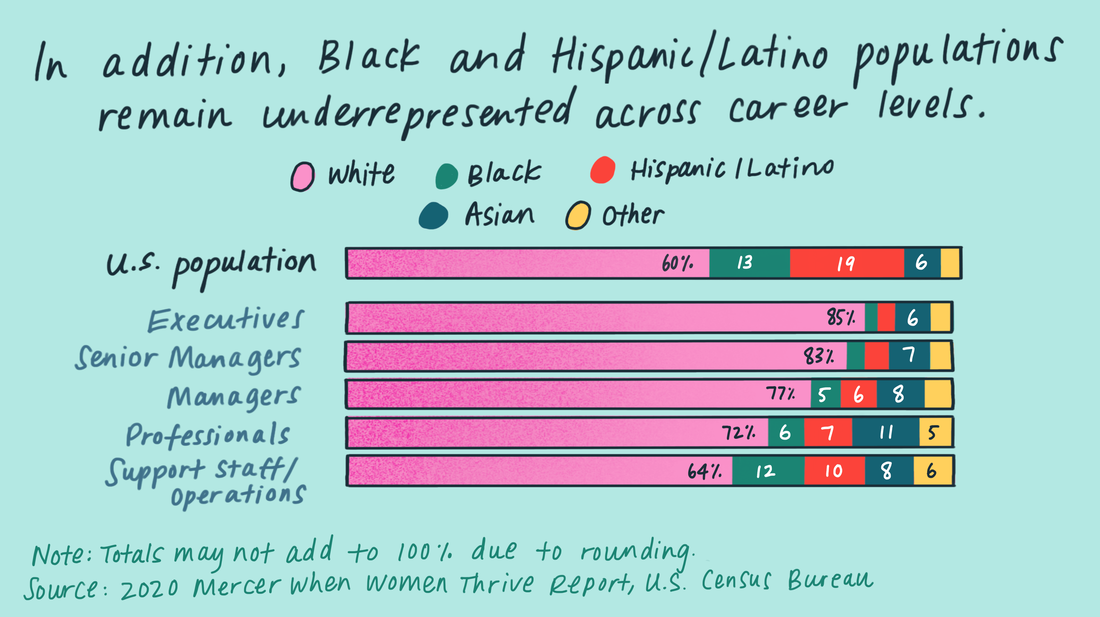 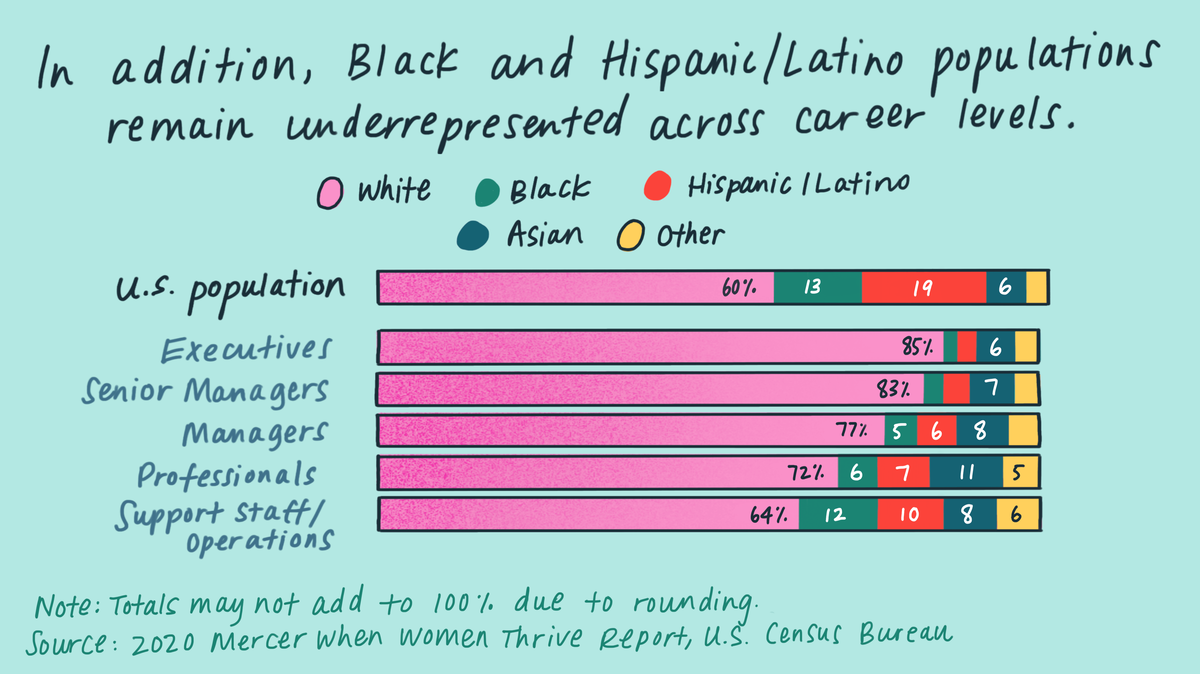 It's about being intentional and forming new pipelines. "If you haven't been recruiting at HBCUs — [historically black colleges and universities] — maybe during your next cycle, that's what you do," she says.

Takeaway 1: It starts with recruiting and hiring.

Silverthorn likes to give an example of two career paths: Dave and Jasmine.

"And, you know, Dave is a young white man," she says. "But I want you to look at Jasmine, she's a young Black woman. Where are those paths to her success? Where are the points in the path where, you know, she is not being allowed to take to that next level?"

She says that maybe Dave is succeeding because he's getting assignments and work through his fellow Daves. But, she says, "I want you to look at Jasmine! You have to figure out [what it is] in this company that is not working for her and fix that."

The Most Important Mail You'll Ever Send: A Ballot

Meanwhile, Harts found that of the more than 100 women of color she interviewed for her book, 70 percent told her they didn't feel like their managers were invested in their success. She says to start by looking at existing talent within your organization. That might mean making room for someone with new ideas at the company or setting up training for existing employees to explore management and leadership opportunities.

Also, be mindful of who does the "office housework" — the behind–the–scenes, administrative grunt work. It often goes to women, particularly women of color.

How might an organization improve the promotions process and salary transparency?

Part of taking a hard look at pay involves asking some basic questions. "When you look at your compensation, are you actually fairly compensating people – and not just their base compensation, but their bonus as well?" Silverthorn asks. "Are they being compensated adequately and equally across gender and identity and ethnic groups?"

Managers can also take a close look at job descriptions. Some of the questions Silverthorn asks when doing this: "Are these job descriptions, including the internal job descriptions, are they free from biased language? Are the required qualifications so specific that they are excluding people from marginalized identities? What does internal advancement look like for your [existing] BIPOC [Black, Indigenous, and people of color] employees?"

During this pandemic, a lot of leadership and managers might fall back on, well, we don't have money to give promotions. We don't have financial stability. Everything's frozen. What are some other ways to support employees?

Support isn't all financial. It can also mean simply making work a safe environment and providing opportunities of growth for employees of color. "It means giving employees the opportunity to show their full selves without fear of negative consequences," Harts says.

She acknowledges that providing extra support, especially while remote, can be difficult. "It's really going to require managers to extend themselves in maybe a way they hadn't before. It might mean these managers thinking about stretch assignments for these employees, to close existing opportunity gaps," she says.

Harts says that part of listening is creating what's called a 'psychologically safe' environment. She was once having a conversation with her boss and teammates when he looked at her orange fingernail polish and said to her, "You people love bright colors." He continued to joke about it for 15 minutes, she says. Nobody else on her team said anything. One way to be a better ally — and create a 'psychologically safe' environment — is to call out these kinds of microaggressions immediately and for managers to create a culture of zero tolerance around this, she says.

Silverthorn says it also means bosses getting introspective about their actions.

"Let's stop replicating the workplace of 100 years ago and let's start creating a workplace that works for people right now," Silverthorn says. "And really it starts with interrogating yourself."

She says maybe COVID-19 is providing companies with an opportunity. "If this pandemic showed us anything in this life, it is that if you give corporate America like a month to completely transform how they do work, they can do it. So why can't we do it with racism, too?"

Harts agrees: "Right now we really have a unique opportunity to make the workplace better than we found it. And there are no rules. We get to establish what the new rules look like."