Accessibility links
High School Football During The Coronavirus Pandemic. Safe Or Reckless? Athletic associations in more than 30 states allow high school football to be played during the coronavirus pandemic. Parents, boosters and fans say it's needed. But is playing safe? 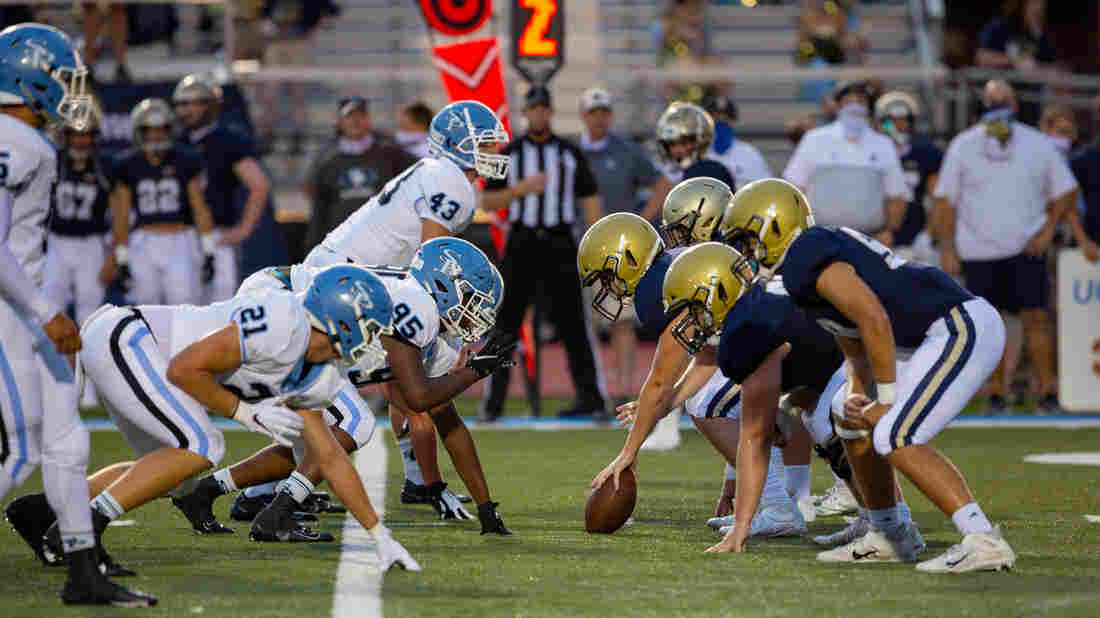 The Briarwood Christian Lions and Spain Park Jaguars faced off in Hoover, Ala. on August 28. It was their second game of the season being played during the coronavirus pandemic. Russell Lewis/NPR hide caption 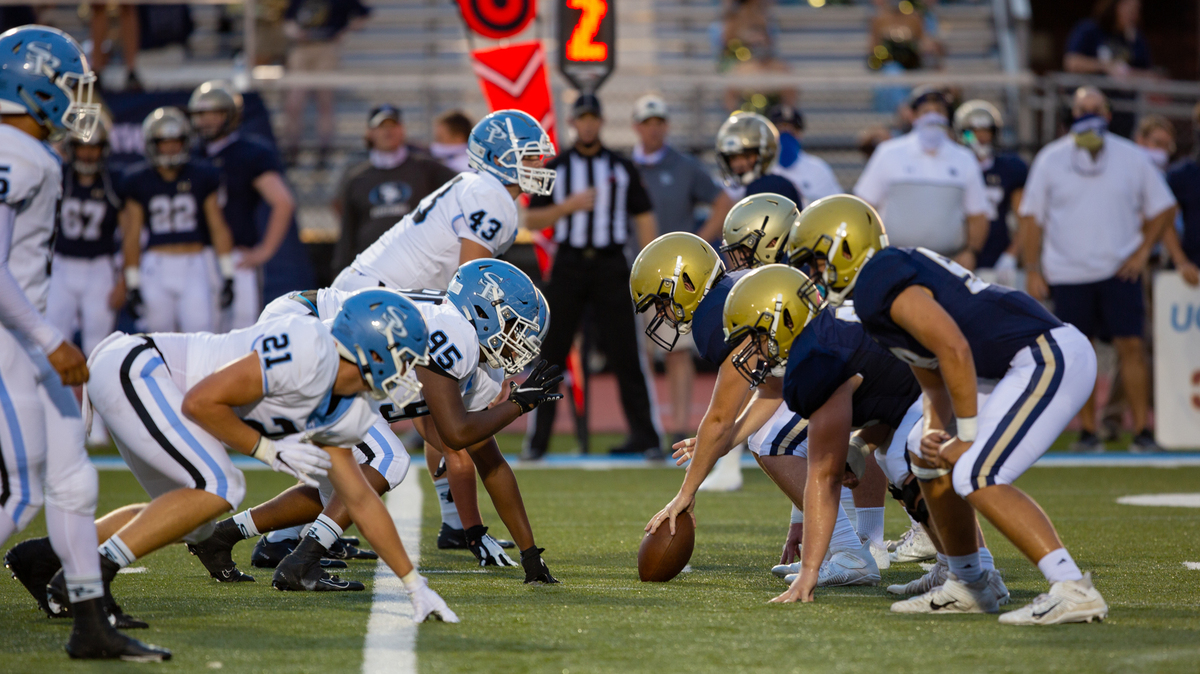 The Briarwood Christian Lions and Spain Park Jaguars faced off in Hoover, Ala. on August 28. It was their second game of the season being played during the coronavirus pandemic.

A semi-full slate of college football games is scheduled for this weekend as a season unfolds....anxiously.

Already, two of the five major Division 1 conference have decided not to play this fall because of the coronavirus.

At the same time, high school football is happening in more than 30 states this fall. And so is a debate over whether it's right, or reckless, to let teenagers play a game considered high risk for COVID-19 transmission.

With the required tip of the cap to Texas, high school football is a really big deal in Alabama too.

Last week's game between Spain Park and Briarwood Christian, outside of Birmingham, could've been any Friday night game. Until, of course, this P.A. announcement:

"For the sake of all our students involved, mask up, social distance and wash your hands. We certainly thank you!"

Many in the stands did mask up. But overall, the crowd probably would've gotten a C-minus grade in social distancing.

A Spain Park team official tried to get his players to be better, walking the sidelines saying, "six feet. Six feet apart."

"That's why I'm hoarse, 'cause I'm talking about space out," Spain Park head coach Shawn Raney said after his team's win. "We took five charter buses last week to Huntsville so we could space our kids out. It's a mess to tell you the truth for coaches, 'cause you're trying to coach a kid and win games with all that [coronavirus precautions]. It's tough but I feel like we've done a good job with our kids. I think we need to be out here."

Down in the southeastern part of the state, you'll never have to convince Mark Rose of the need for football.

He played for the legendary coach Pat Dye at Auburn. He's been a high school head coach for 23 years, he's currently at Russell County High, and was the fifth fastest in Alabama to win 100 games.

So it's notable when Rose says kids shouldn't be playing during a pandemic. 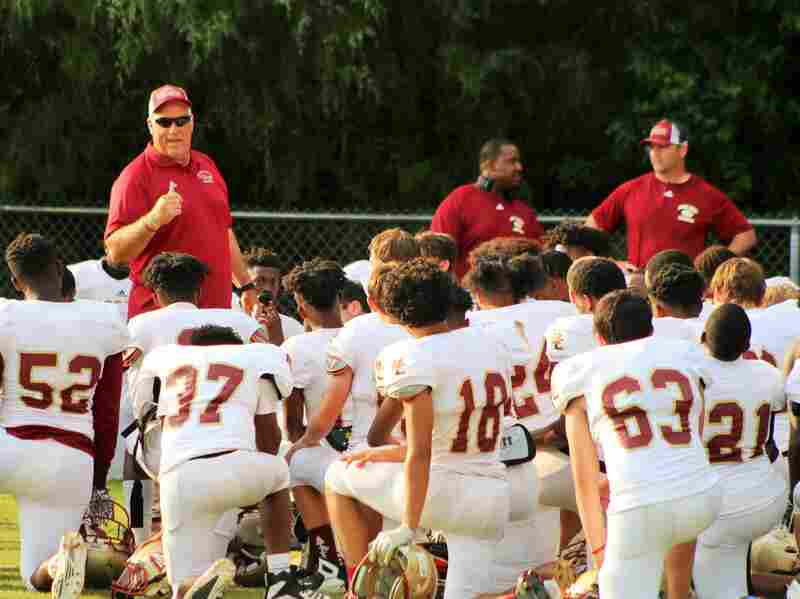 Russell County High School football coach Mark Rose speaks to players during a spring game in 2019. He's against having his team play this season without state-mandated coronavirus testing. Alabama high school officials, like in many other states, say there's not enough money for tests. Courtesy of Charesa Danielson hide caption 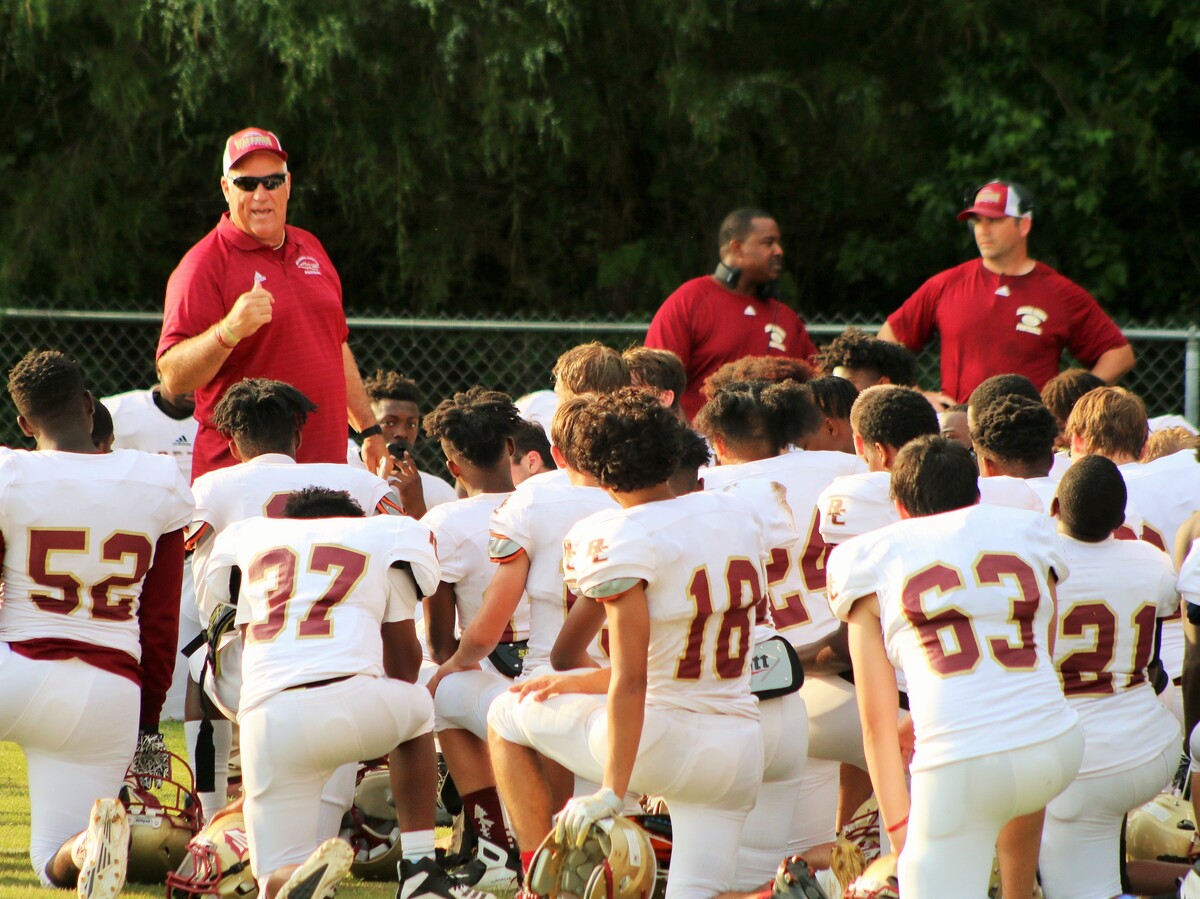 Russell County High School football coach Mark Rose speaks to players during a spring game in 2019. He's against having his team play this season without state-mandated coronavirus testing. Alabama high school officials, like in many other states, say there's not enough money for tests.

"I mean it's flat out child exploitation," Rose said. "Of course kids want to play. But we are charged to protect them."

Rose says he can't, because of a lack of COVID-19 testing. Kids get tested when they show symptoms. But in the state high school athletic association's COVID protocols, there's not a policy for testing football players, as there is in college and the NFL.

"[With] the NCAA, any school that can't test in football or any high-risk contact sport once per week, is shut down completely," Rose said. "We have no testing policy. Our testing policy is wait 'til somebody gets real sick and then go tell the parents to test them."

NFL's Top Doctor On How Football Plans To Return

"We're breaking every rule that every doctor in the world says. We're not going face-to-face [in] school, yet we're running players into each other all week, and sending them home untested. And then on Friday night, they want us to go out there and run 'em in, 100 on our sideline and 100 on the other sideline, and all we know is nobody out there has been tested."

Rose says an asymptomatic outbreak on his team landed a 33-year-old assistant coach in intensive care for nearly two weeks, and sickened a player's mother. The risk of spread is greater, he says, in his rural county where many of his players live in multi-generational homes.

"We're sending them back into homes with families that're vulnerable, and this is a mass social injustice," Rose said. "I can't stand by and watch it. It's disproportionately affecting minorities, and not only that, but poor rural folks in Alabama because they got multi-generations in the house.

"Some of the them folks at the [Alabama High School Athletic Association – AHSAA] need to come look some of these people in the eye and see the fear they have and see me telling them to keep their son home and work out, because I fear for their health. It's more important than football."

"I guess what Coach Rose would like to do is have the state or some entity pay for the testing for all the students and the coaches," said Ron Ingram, the Assistant Director at the AHSAA. "That would be admirable if the funding was there."

It's not – in Alabama or most other states. Ingram says Alabama acknowledges the risk of football and coronavirus, but believes it can be mitigated with safety protocols the state does have.

"We're not going to sit here and lament that we don't have something," Ingram said. "We're going to work with what we have. And what we have are dedicated, professional teachers, adminstrators, coaches that really want the best for their children, that God graced them with to look after."

Ingram adds it still needs to be established whether or not football is the potential spreader Mark Rose fears.

"Right now, we don't have enough data to say playing football ups that risk," he said. "That same teenager [who plays football], if he goes to the local McDonald's on a Friday night with his friends, that same risk, he still goes back home to the same parents and to the same grandparents."

If it's data they need, it's coming, says Dr. Michael Shingles. He's on a sports medicine committee advising high schools in Michigan, which this week reinstated high school football after earlier cancelling it for the fall.

"We're going to have an experiment in the United States right now because there are states that are going to [play high school football] and states that are not," Dr. Shingles said. "And we're going to find out [the impact], probably in the next couple of months, not from positive tests but from people getting sick and having major issues." 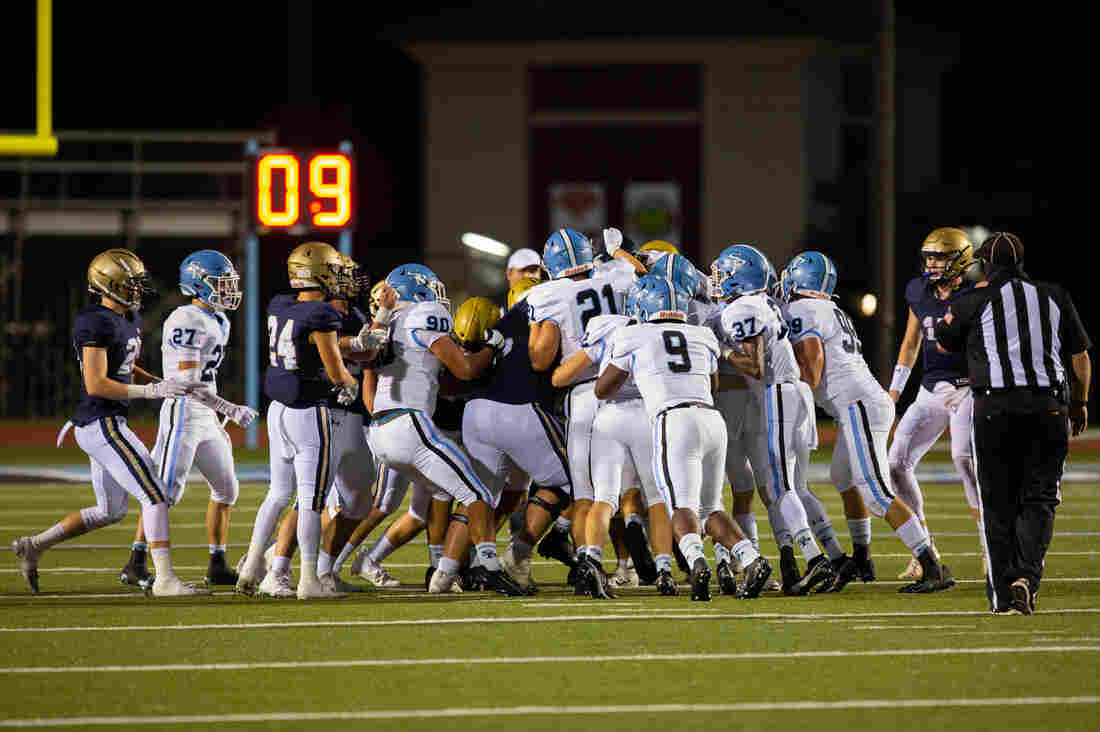 Players from both Spain Park and Briarwood swarm the ball carrier during a play late in the first half. Social distancing on the sidelines is emphasized but impossible on the field. Russell Lewis/NPR hide caption 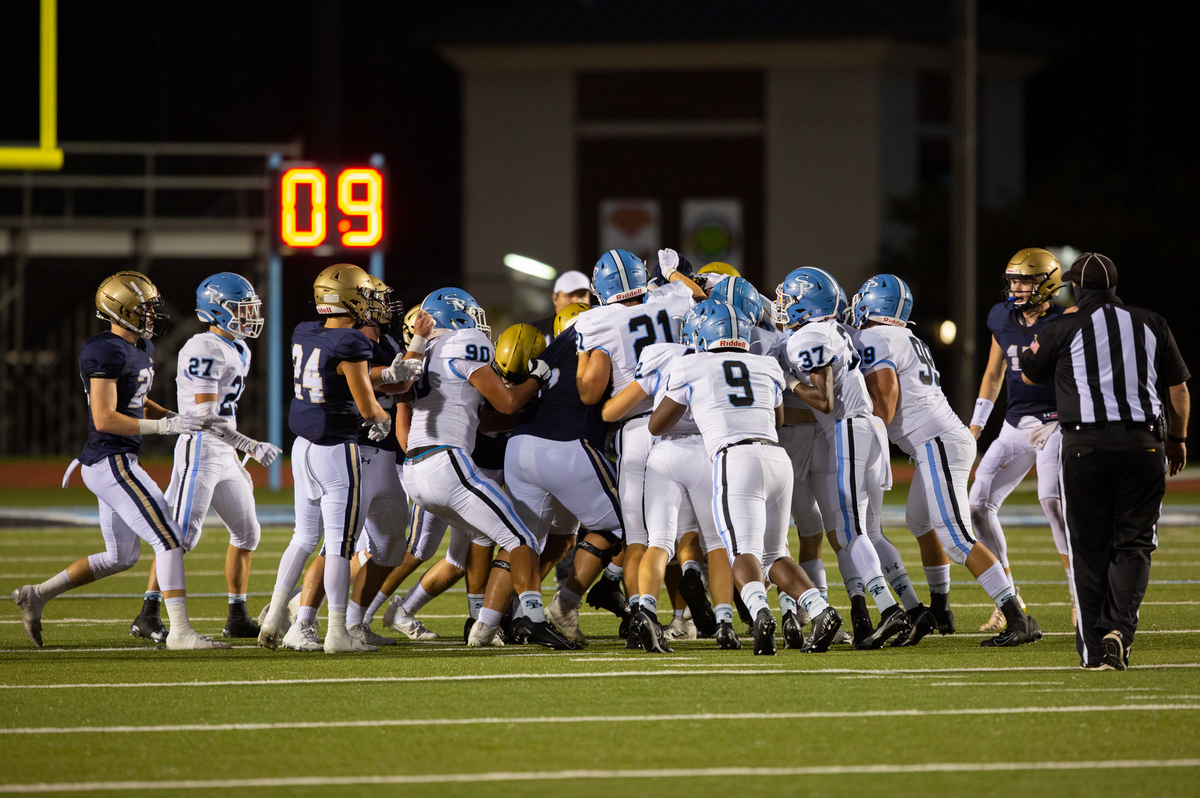 Players from both Spain Park and Briarwood swarm the ball carrier during a play late in the first half. Social distancing on the sidelines is emphasized but impossible on the field.

Mark Rose in Alabama would rather not have high school football players and their families be "guinea pigs."

Rose says he doesn't speak for officials in his school district, but he does for many other coaches who fear losing their jobs if they speak out. And who fear worse.

"I got coaching friends coming apart at the seams," Rose said, "worrying about somebody dying every day."

Rose was braced for a showdown when he made it clear he would not coach his team tonight, in Russell County's season-opening game, as a way to protest playing without testing.

But then the virus intervened.

This week, one of his players tested positive, possibly exposing as many as two dozen teammates.

Practices are shut down. Tonight's game is off. And Rose says it's uncertain when his Russell County Warriors will play football again.