Accessibility links
Michael Reinoehl, Portland Shooting Suspect, Killed By Law Enforcement Michael Reinoehl's death came as VICE News aired an interview in which he said he shot a Patriot Prayer supporter in what he believed was self-defense. 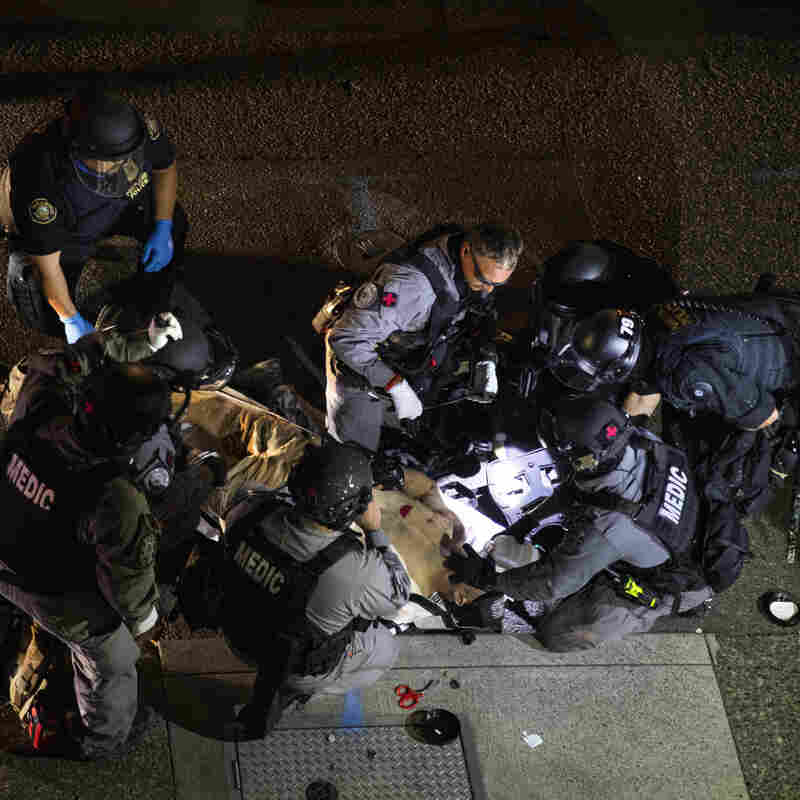 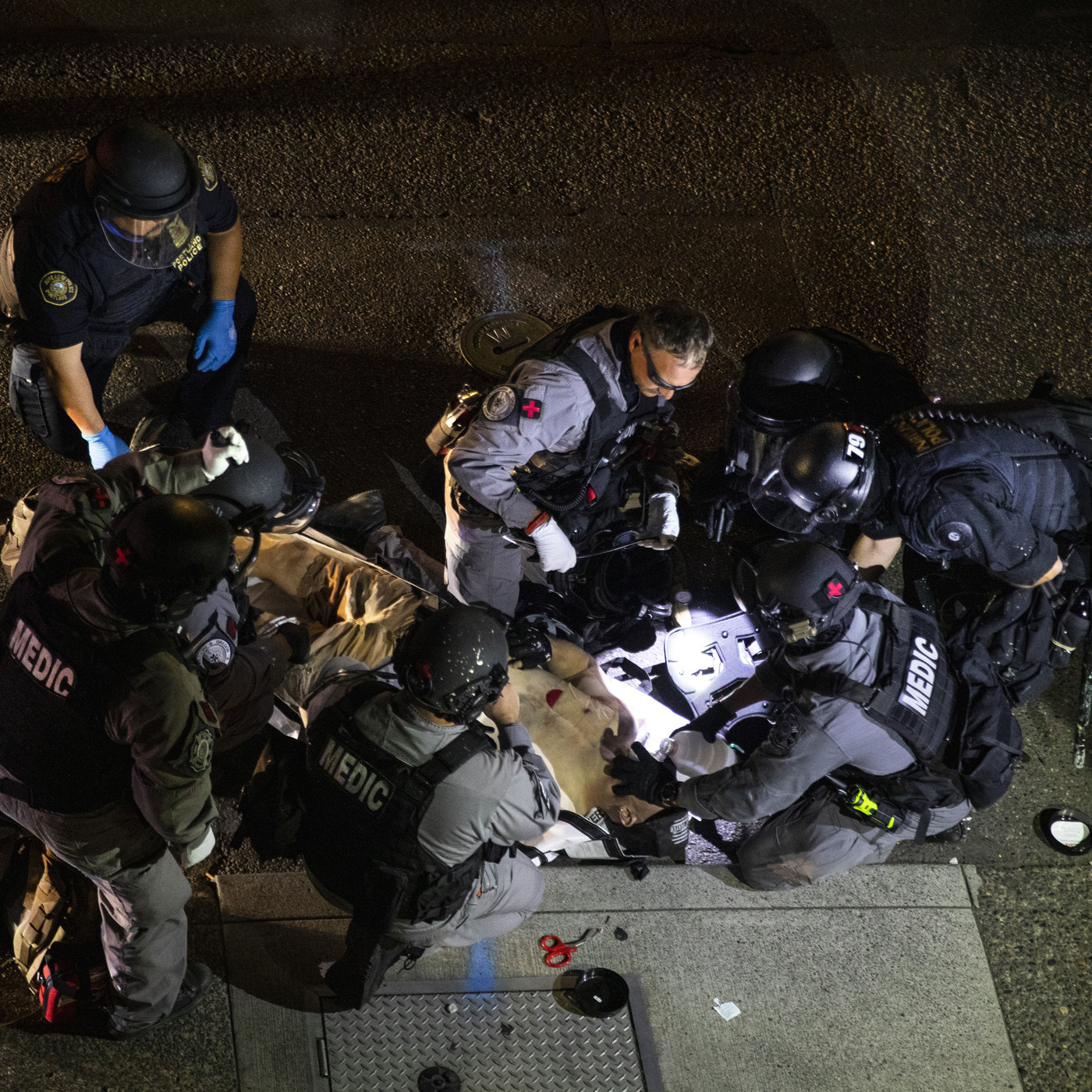 Emergency personnel treat Aaron Danielson in Portland, Ore., on Saturday. The man suspected of killing Danielson, Michael Reinoehl, was killed by law enforcement agents as they attempted to arrest him Thursday night.

Hours after an interview was posted online in which Michael Reinoehl took responsibility for the fatal shooting on Saturday of Patriot Prayer supporter Aaron Danielson in Portland, Ore., Reinoehl was killed by law enforcement officers as they attempted to arrest him in Olympia, Wash., according to the U.S. Marshals Service.

"Initial reports indicate the suspect produced a firearm, threatening the lives of law enforcement officers. Task force members responded to the threat and struck the suspect who was pronounced dead at the scene," according to the statement. The statement did not say whether Reinoehl, who identified with the militant antifascists known collectively as antifa, had fired his weapon.

The Olympian newspaper said Reinoehl was spotted as he left an apartment and that law enforcement officers from three different jurisdictions had fired at him.

Thurston County Sheriff's Lt. Ray Brady, speaking at a Thursday night news briefing, said the encounter occurred at about 7:30 p.m. local time. He said Reinoehl ran to a station wagon parked outside the apartment complex and that officers trying to stop him opened fire.

Finding that the station wagon was boxed in by law enforcement vehicles, Reinoehl sprinted from the car as he produced a gun, at which time officers fired again, Brady said.

Two witnesses told The Olympian that they saw two SUVs pull up and that a man got out of the car and began firing a weapon. They said they heard 40 to 50 shots and that officers returned fire and hit the man.

Four officers fired their weapons, according to Brady. They're from the Pierce County Sheriff's Department, Lakewood Police Department and the Washington State Department of Corrections, all assigned to the fugitive task force acting in their role as U.S. marshals, he said.

"The tracking down of Reinoehl — a dangerous fugitive, admitted Antifa member, and suspected murderer — is a significant accomplishment in the ongoing effort to restore law and order to Portland and other cities," U.S. Attorney General William Barr said in a statement.

'I wasn't going to do that'

In an interview with VICE conducted by freelance journalist Donovan Farley this week, Reinoehl seemed to acknowledge shooting Danielson. Farley reported that Reinoehl said he went downtown Saturday night to provide security for racial justice protesters who felt threatened by a caravan of Trump supporters who paraded through the city center.

Reinoehl said he and a friend ended up in a standoff with a man who he says had a knife.

"Had I stepped forward, he would have Maced or stabbed me," Reinoehl told VICE. "I was confident that I did not hit anyone innocent and I made my exit."

Reinoehl told VICE he considered the shooting an act of self-defense.

"You know, lots of lawyers suggest that I shouldn't even be saying anything, but I feel it's important that the world at least gets a little bit of what's really going on," he said. "I had no choice. I mean, I, I had a choice. I could have sat there and watched them kill a friend of mine of color. But I wasn't going to do that."

Reinoehl had not been arrested or publicly named as either a suspect or a person of interest in the killing of Danielson, 39. Earlier Thursday, a spokesperson for the Multnomah County district attorney said that the office had no comment and that the investigation remained ongoing.

Reinoehl's sister told OPB that Portland police asked her to identify a man in photos from protests after Saturday's shooting. She told them it was her estranged brother. The sister spoke on the condition that she not be named because, she said, her family has received death threats.

Photographs on social media show a man appearing to be Reinoehl with a fist tattoo on his neck; in photos, the tattoo looks similar to the symbol associated with the Black Lives Matter movement.

Reinoehl, who is white, has ties to the area with addresses in Portland, Clackamas and Sandy, Ore.

Reinoehl's sister described her brother as erratic and self-destructive.

"I do know he has a temper, and I do know he acts very badly to being provoked," Reinoehl's sister told OPB.

A shift on social media

It's not clear whether Reinoehl and Danielson knew each other or had interacted at other political rallies during Portland's summer of racial justice demonstrations before they crossed paths Aug. 29.

Reinoehl, 48, a former professional snowboarder, appears to have attended many of the nightly protests, according to his Instagram page.

His social media account depicts a dramatic shift at the end of May, coinciding with the killing of George Floyd by Minneapolis police.

Prior Instagram posts depict Reinoehl snowboarding at Ski Bowl near Mount Hood, Ore., photos of his children, a video of a hike on Rocky Butte, pictures with his dog, a photo from the top of Portland's Mount Tabor Park, as well as artful scenes of sunrises, sunsets, trees and nature.

But starting May 30, Reinoehl's posts are almost exclusively scenes from Portland's protests.

The Oregonian/OregonLive first reported that Reinoehl was being investigated in connection with Saturday night's shooting.

Around 8:45 p.m. on Saturday, two shots were fired near the corner of Southwest Third Avenue and Alder Street in downtown Portland.

The shooting was captured on video from a distance and posted online, so it's difficult to determine exactly what happened.

The footage begins with several seconds of shouting. A man in a white shirt appears to walk out into Third Avenue, he pauses, then shots are fired. The man in the white shirt briefly hesitates after the shots and then turns and runs. Someone shouts "Go! Go! Go!" Almost simultaneously, another man is seen taking a few steps in the other direction and then collapsing on the ground.

The whole incident appears to unfold in about 10 seconds. In that same video, police in riot gear arrive on the scene in less than a minute. Danielson died from a single gunshot wound to the chest, the Multnomah County Medical Examiner said Monday.

Danielson was a supporter of the far-right regional political group Patriot Prayer. Since 2016, when the group was formed, its members have engaged in violence during protests in Portland with anti-fascist demonstrators.

The caravan began at Clackamas Town Center and drove through downtown Portland. Many of the hundreds of vehicles were decked out in Trump flags and signs. At times, participants sprayed racial justice protesters with pepper spray from the back of pickup trucks. On a few occasions, vehicles in the caravan tried to drive through crowds of demonstrators, though no serious injuries were reported.

At the time he was killed, Danielson wore a Patriot Prayer hat and shorts with a pro-police patch sewn onto them.

Other interactions with law enforcement

Reinoehl has had several recent run-ins with law enforcement.

Court records show he was stopped by Oregon State Police on Interstate 84 in Union County at 12:47 a.m. on June 8 while he was apparently racing against his 17-year-old son.

The two vehicles were traveling at 111 miles per hour when Reinoehl was pulled over, according to state police records. A state trooper found unidentified prescription pills inside the 2005 Cadillac STS that Reinoehl was driving, an unspecified amount of cannabis, and a concealed and loaded Glock pistol. Reinoehl didn't have a concealed handgun license, according to state police.

Reinoehl was charged with driving under the influence of intoxicants, unlawful possession of a firearm, recklessly endangering another person — his 11-year-old daughter was in the car with him — and reckless driving, according to court records. In addition to his daughter, a kitten and a large dog were inside the car.

The incident was first reported in June by the Baker City Herald.

A month later, at 2:10 a.m. on July 5, Reinoehl was cited downtown by Portland police for resisting arrest, interfering with an officer and possession of a loaded firearm in a public place.

That case remains an ongoing investigation with the Multnomah County district attorney's office and the Portland Police Bureau, according to a spokesman for the DA's office.

A photo he posted June 3 on Instagram shows protesters and law enforcement on opposite sides of a metal fence.

"It might be time to take A New Perspective on things," Reinoehl wrote. "Things are bad right now and they can only get worse. But that is how a radical change comes about. Hopefully if we do it right the people will prevail and in turn Common Sense will save our planet."

On June 16, Reinoehl wrote on Instagram that he was among the many protesters who he said didn't know where their actions would lead.

"I am 100% ANTIFA all the way! I am willing to fight for my brothers and sisters!" he wrote. "We do not want violence but we will not run from it either."

"But it will be like a fight like no other! It will be a war and like all wars there will be casualties," he said. "I was in the army and I hated it."

While Reinoehl's sister said she had a vague recollection of her brother serving in the military, a U.S. Army spokesperson was unable to find any records connected to Reinoehl in an Army database.

"I did not feel like fighting for them would ever be a good cause," Reinoehl wrote. "Today's protesters and antifa are my brothers in arms. This is a Cause to fight for. This truly is fighting for my country!"

"He was going to get himself killed"

As the incident unfolded Thursday evening, multiple people called the Thurston County emergency dispatch line to report gunshots in Tanglewilde, outside Olympia. Callers reported people "running all over" and possibly 10 men, "all in their 20s and 30s," with weapons.

Dispatchers were preparing to send deputies to the scene when one noted: "Just for information, these may be the U.S. Marshals ... They were looking for a suspect in a shooting from Portland."

Late Thursday night, Reinoehl's estranged sister said she had heard rumors this week he was in custody. And she hoped they were true — for her brother's sake.

"I knew if he was out there he was going to get himself killed one way or another, but I didn't think it would be with the police," she said.

She said she was both angry with her brother and sad at his death.

"It's awful," she said. "This whole thing is awful. There's a lot of people out there who feel like violence is the only solution to fixing things now, people on both sides."