Accessibility links
Beirut Blast: Rescue Workers Hope To Find Survivor 1 Month Later The effort was launched after a sniffer dog named Flash signaled to his Chilean search and rescue team that someone might be alive under a pile of concrete and debris. 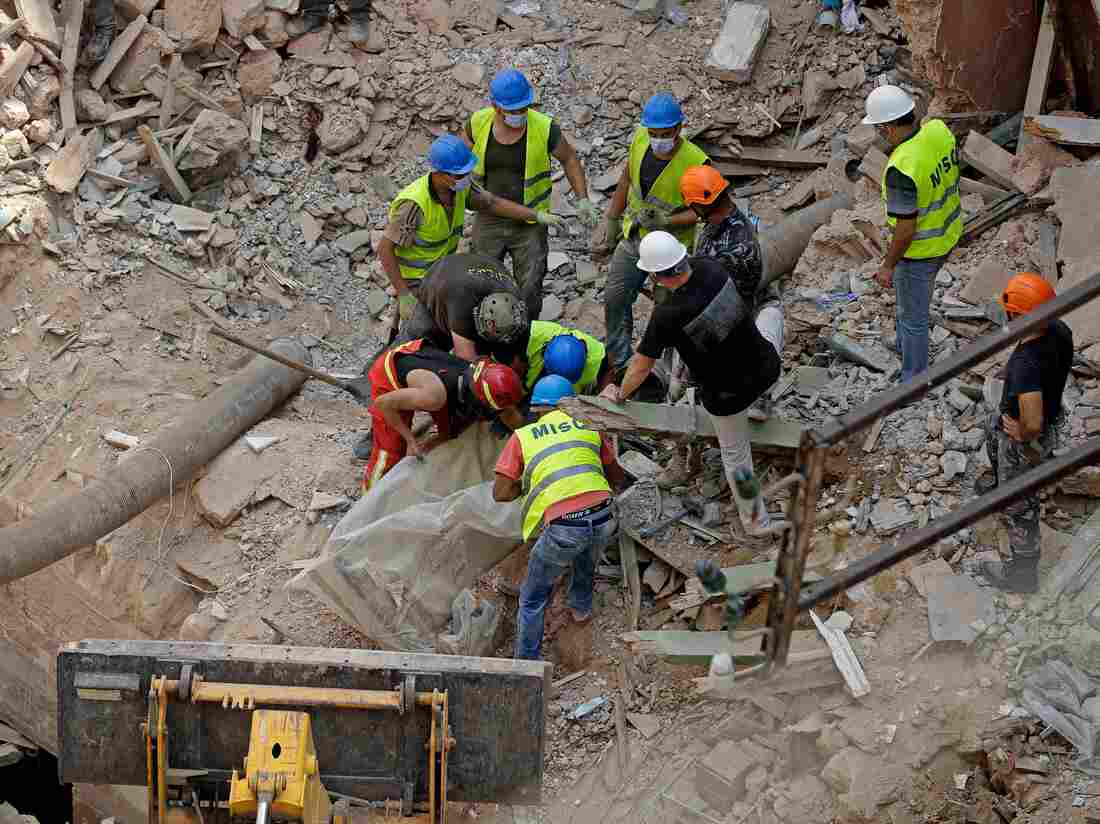 Rescue workers dig through the rubble of a badly damaged building in Lebanon's capital, Beirut, searching for possible survivors a month after a massive blast at the nearby port. Joseph Eid/AFP via Getty Images hide caption 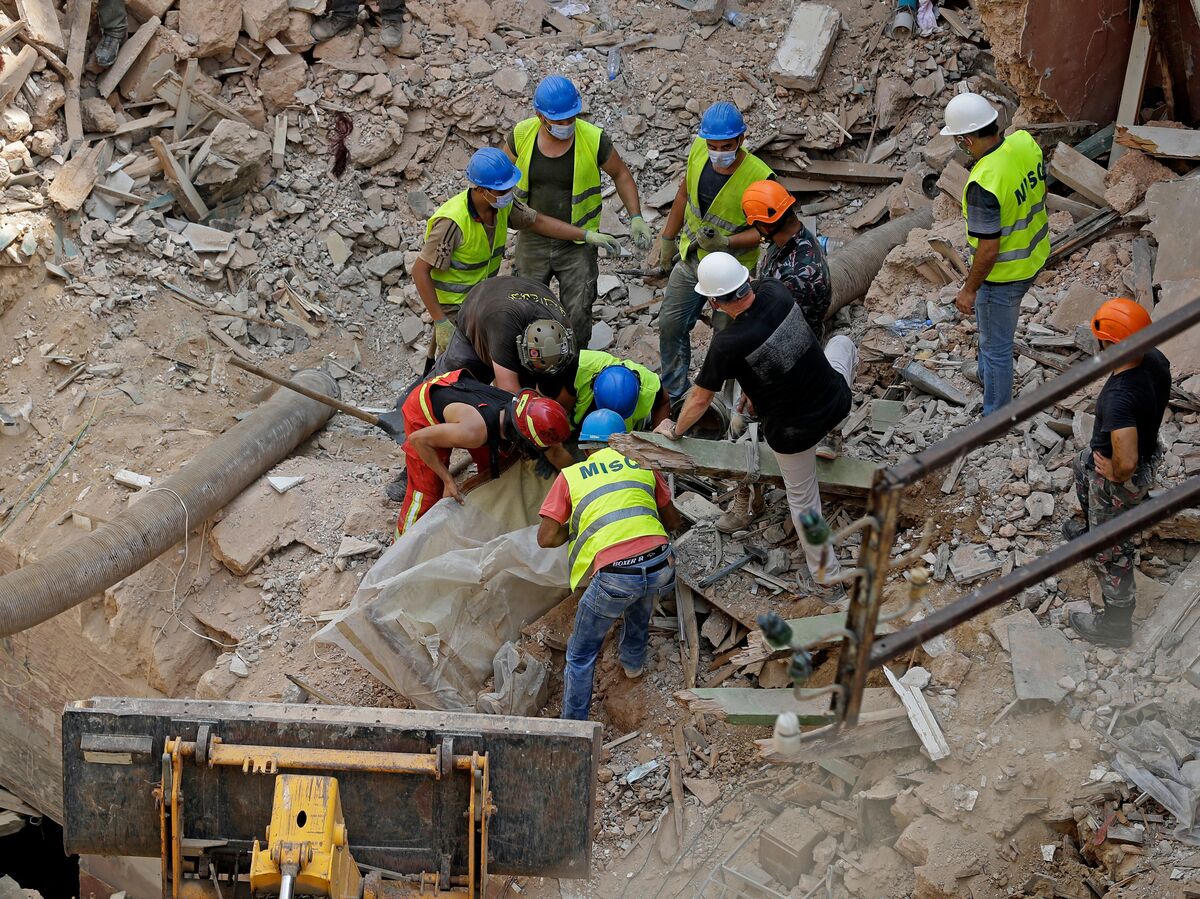 Rescue workers dig through the rubble of a badly damaged building in Lebanon's capital, Beirut, searching for possible survivors a month after a massive blast at the nearby port.

Rescue workers in Beirut are delicately exploring the rubble of a collapsed building where a specialist team says it detected signs of life — one month after Lebanon's capital was devastated by a massive explosion at its port.

The effort began after a sniffer dog named Flash signaled to his Chilean search and rescue team that someone might be alive under the concrete and debris in the neighborhood of Mar Mikhael.

Searchers said their sensors have confirmed the presence of a body — initially detecting a possible breathing cycle on Thursday and then what they believe could be a weak human pulse.

"The experts accompanying us have discovered that someone is breathing slowly from under the rubble, and at a depth of 3 meters under," the head of the Chilean rescue team said, according to Lebanon's state-run National News Agency.

The Chilean official, who was not identified by name, continued, "This prompted us to open three tunnels at a depth of 3 meters to reach the location of this person. Work is currently underway to reach the place where the pulse was discovered, yet there is no indication as to whether this person is alive or not."

People in the area were urged to silence their cellphones so that crews could listen for signs of life, according to Timour Azhari of Al-Jazeera. On Friday, onlookers were asked to leave, for fear that the multitude of cellphone and other signals might interfere with the sensors.

Rescue crews worked through the night to try to clear debris and get inside what remains of the old stone building. They reportedly planned to pause their work late Friday and resume on Saturday.

While the chance of finding someone alive is slim, searchers said it's a chance worth pursuing. And for a moment, at least, the news of a rescue operation has changed the mood in Beirut as people watch the operation in Mar Mikhael, which sits on the other side of a large highway from where the blast emanated.

The effort has captured the country's attention, with local news channels following it minute by minute. The rescue work took place as Beirut held commemorations to mark one month since the blast, from a moment of silence to the pealing of church bells.

After all the destruction and sadness, Lebanese say, they need a miracle.

The catastrophic explosion on Aug. 4 — caused by 2,750 tons of ammonium nitrate stored in a warehouse at Beirut's port — killed nearly 200 people and damaged or destroyed thousands of buildings. Until now, the official response has increasingly focused on recovering bodies as families and workers lost hope of finding more survivors.

Some updates:
•Chilean team took a break but is now back to the rescue site.
•Their drone broke but a group donated a new one.
•Rescue team dug under the exact designated area but still did not find any bodies.
•Rescue team has a certain strategy that we need to trust. pic.twitter.com/Jv99ySnYJO

With Lebanon's government and Beirut's infrastructure still reeling, parts of the rescue effort in Mar Mikhael have been crowdsourced, with the public helping to supply key equipment.

Melissa Fathallah, a 42-year-old protester, told NPR that volunteers put out a call for a crane late Thursday night after search teams were forced to stop their work. There was concern that a nearby wall, already cracked, might collapse and endanger the lives of rescuers and anyone alive in the rubble.

"They said we need a crane and we can't go in now," Fathallah said. "The person in charge at that time says we'll be back at 8 in the morning. This is a time-sensitive matter. You have someone who still has a heartbeat. So we're going to do the best we can to get to that heartbeat and to that person still alive."

Work was suspended for roughly two hours overnight so that engineers could evaluate the risk, according to a military statement.

Lebanon's president, Gen. Michel Aoun, is among those watching the rescue attempt. Aoun has urged the country's Civil Defense agency to keep up the search, his office said Friday.

Searchers also have deployed a drone to inspect the building, according to the National News Agency. A second drone was donated after the first one broke, journalist Luna Safwan reported.

The rescue workers are heroes for trying to find a survivor, Fathallah said. She added, "The government needed to play its role and its part. ... Our saying now is 'We are the government.' "