Accessibility links
'There's No Sign Of Life.' Rescue Team In Beirut Ends Search For Possible Survivor After 72 hours of searching the wreckage of a collapsed building in the Lebanese capital, the Chilean rescue team leading the operation has said they were unable to find a survivor in the rubble. 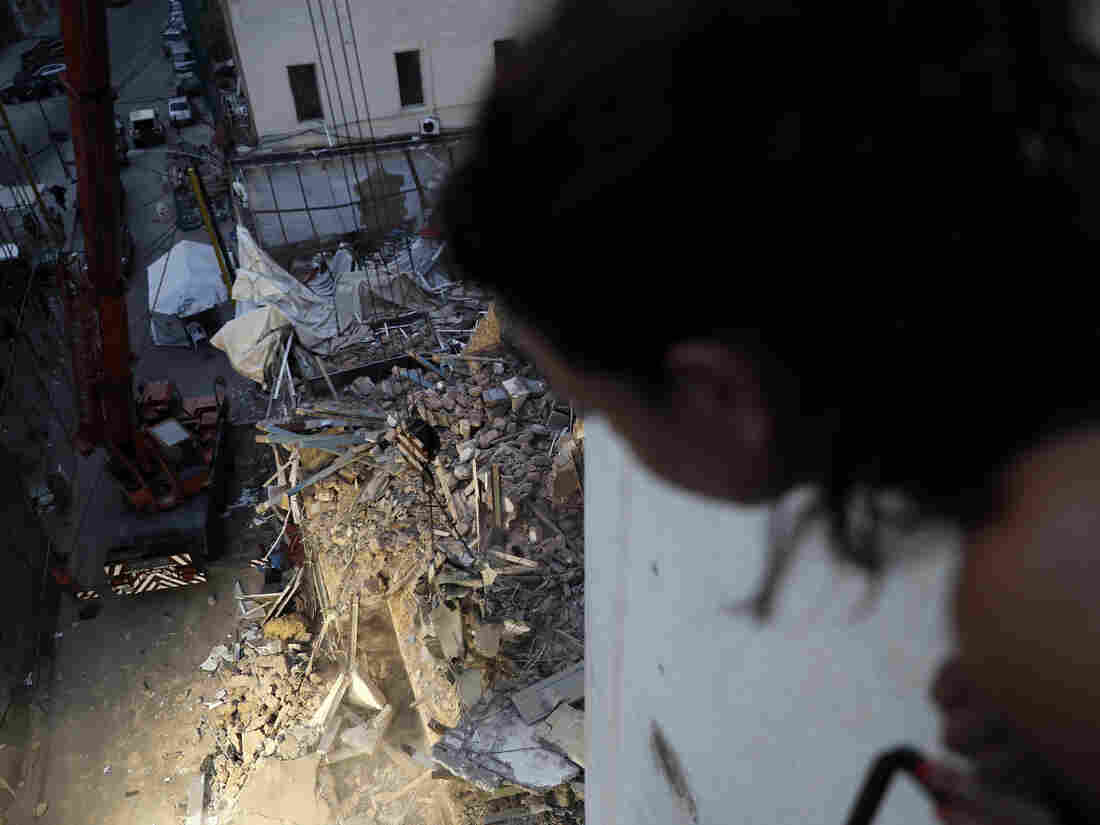 A woman watches from her apartment balcony as a crane removes the rubble of a building after a Chilean rescue team detected signals there may be a survivor at the site in Beirut, Lebanon, on Sept. 4, 2020. Hussein Malla/AP hide caption 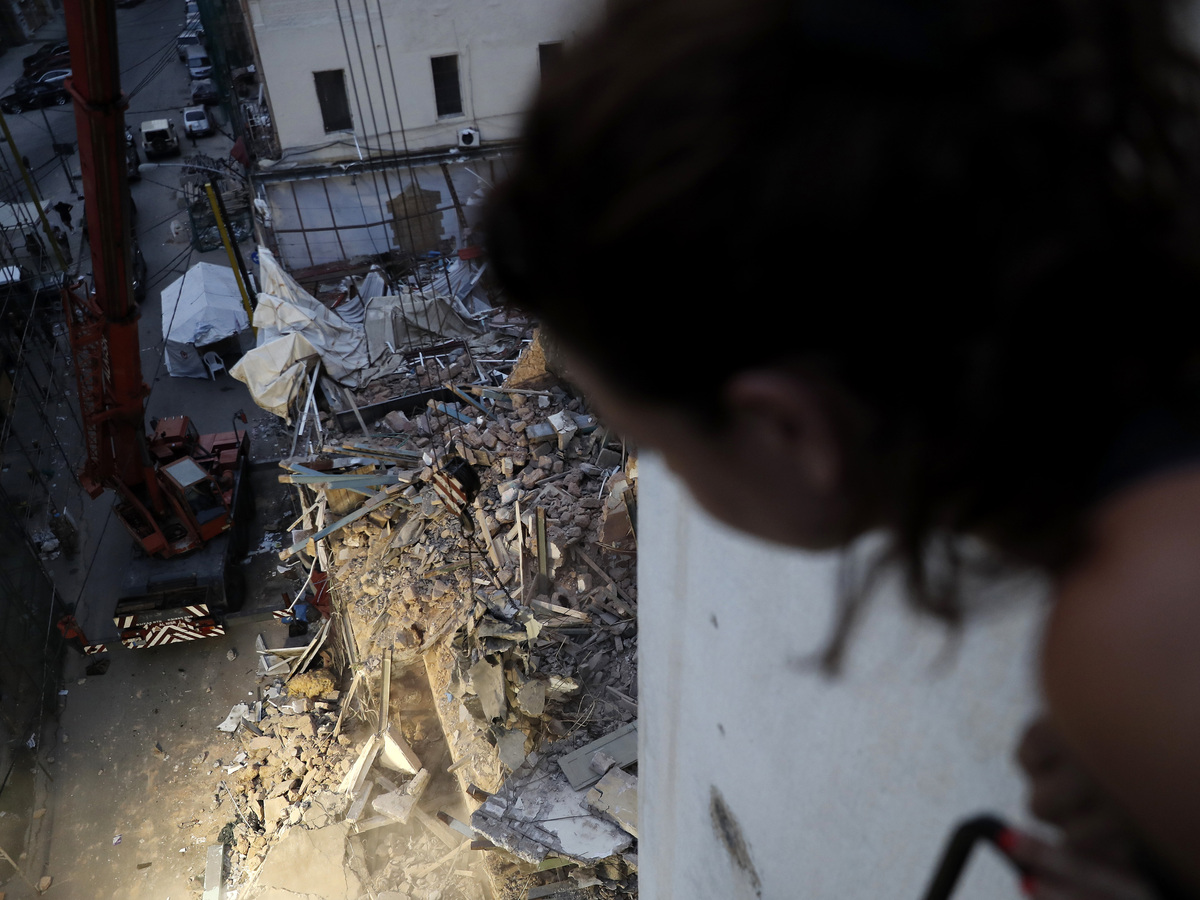 A woman watches from her apartment balcony as a crane removes the rubble of a building after a Chilean rescue team detected signals there may be a survivor at the site in Beirut, Lebanon, on Sept. 4, 2020.

Lebanon has held its breath for three days, waiting for rescue teams to emerge from the wreckage of a collapsed building with good news. The potential for finding a survivor had offered a brief glimmer of hope for Lebanon, still mourning after a massive explosion in Beirut's port ripped through half the city last month.

But after 72 hours of searching for a possible survivor trapped underneath the wreckage of a collapsed building in the city's Gemmayze neighborhood, the Chilean rescue team leading the operation has said they were unable to find signs of life in the rubble, extinguishing hopes of finding a survivor.

"Unfortunately, today, we can say there's no sign of life inside of the building," Francisco Lermanda, who headed the Chilean rescue team leading the operation, told reporters Saturday evening.

Lebanese and Chilean rescue teams had been digging relentlessly since Thursday afternoon. The Topos Chile search and rescue team had detected possible signs of life after their sniffer dog, Flash, had signaled to them that a human body may be in the destroyed building. Their sensors also detected signs of life — a respiratory cycle.

'Lots Of Destruction, But This Is The Future': Photos Inside The Homes Of Beirut

The news seemed impossible a full month after the massive explosion erupted from Beirut's port on August 4th and devastated large swathes of the city, killing nearly 200 people and injuring thousands. Hopes were buoyed by the prospect of a survior amidst the rubble, although authorities repeatedly warned that the chances of finding someone alive so long after the blast were slim.

Confidence in Lebanon's authorities has wavered following the explosion, caused by nearly 3,000 tons of ammonium nitrate stored haphazardly near a densely populated area of Beirut. Even before the blast, anger had already been simmering in the aftermath of a financial and economic meltdown last year, resulting in severe inflation and a popular uprising against politicians. The August 4 explosion further angered citizens after it emerged that high-ranking politicians and government employees had previous knowledge of the dangers of the stored explosive material — but made little effort to remove it.

The rescue operation has further fanned the flames of outrage towards a ruling class that critics say has not done enough to recover the bodies of victims who are still missing.

On Thursday night, search teams were forced to stop their work over concerns that the collapsed building was unsafe, and could endanger the lives of rescuers. The rescue team needed a crane to remove the wreckage, but local authorities said a crane wouldn't arrive until morning. In response, protesters demonstrated at the rescue site. Some activists climbed onto the wreckage, adamant they would continue the search for the potential survivor. 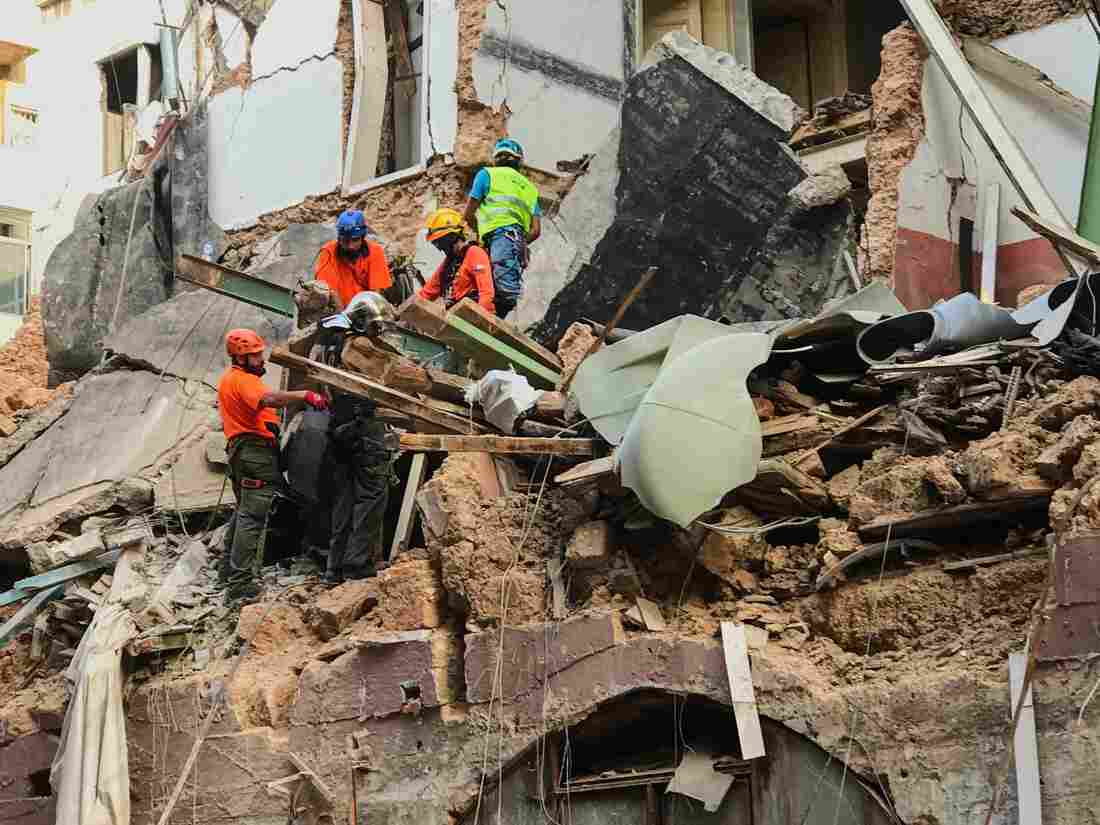 Rescue workers from a Chilean search team poured through the rubble of a collapsed building in the Beirut's Gemmayze neighborhood for three days in search of life. They ended the search late Saturday. Nada Homsi hide caption 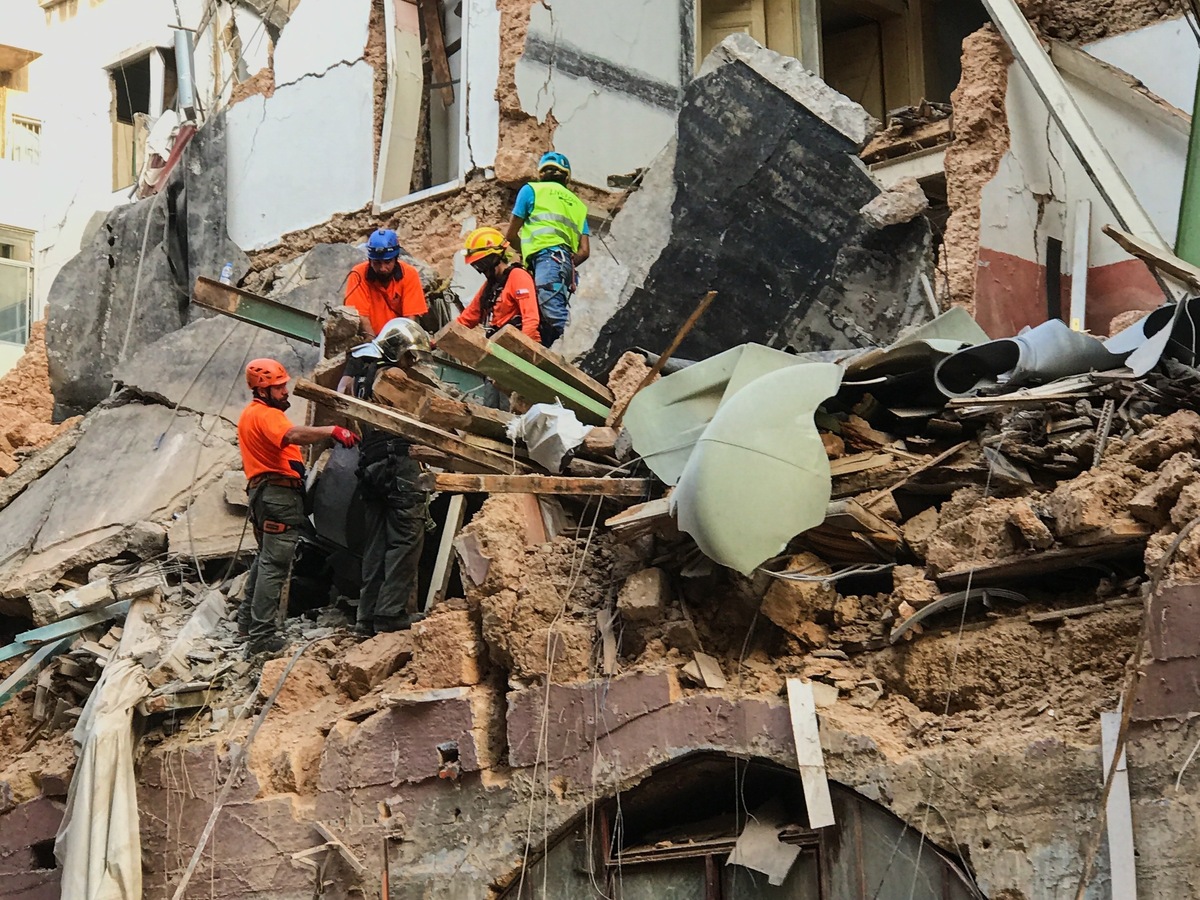 Rescue workers from a Chilean search team poured through the rubble of a collapsed building in the Beirut's Gemmayze neighborhood for three days in search of life. They ended the search late Saturday. 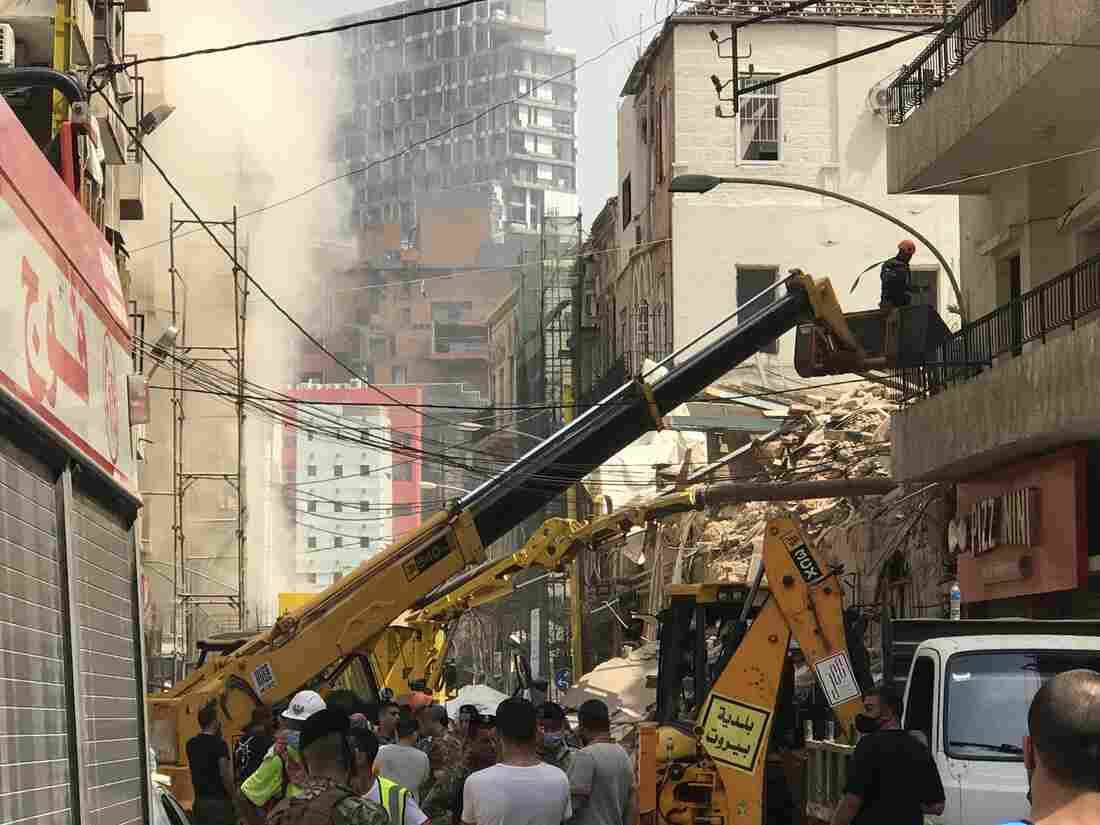 When it became clear that rescuers would need a crane to help with their search, volunteers organized for one to enter the search site. Nada Homsi hide caption 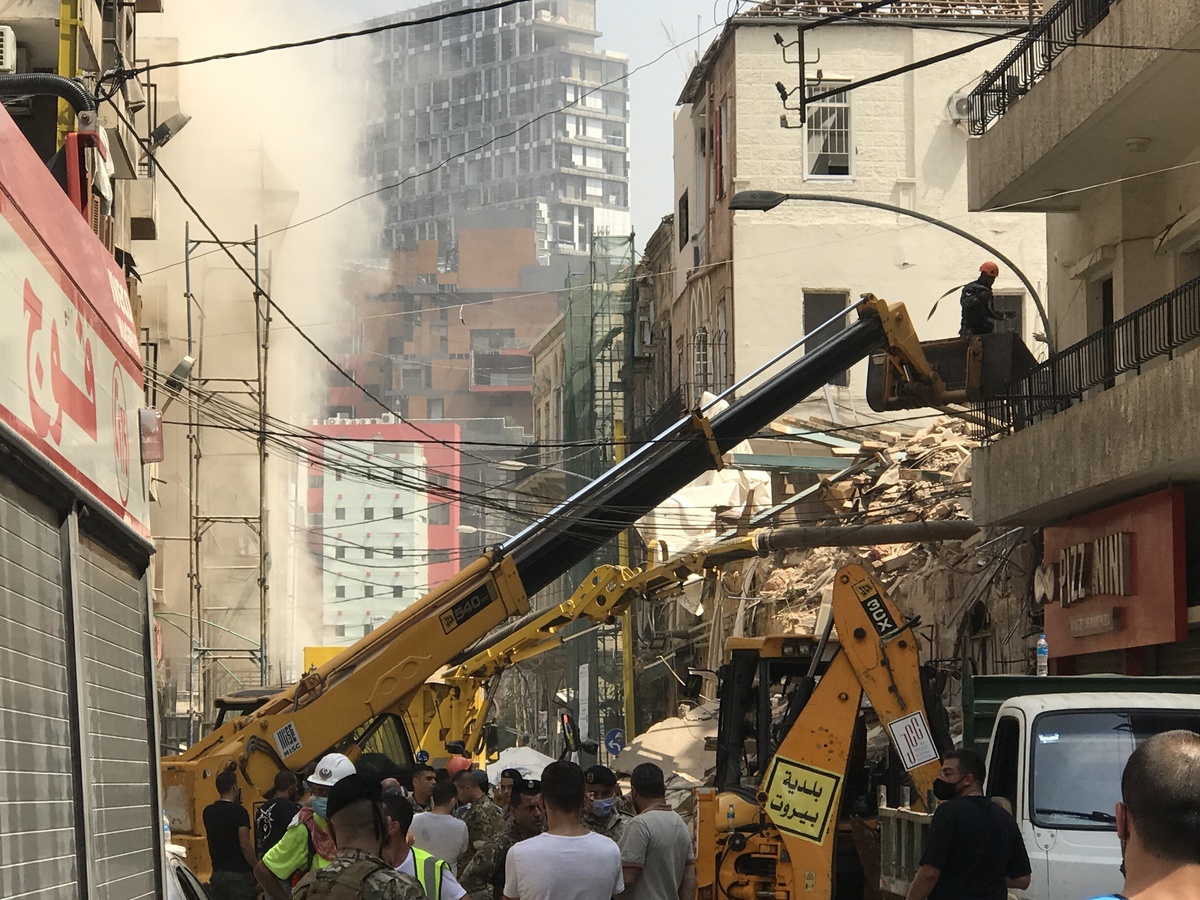 When it became clear that rescuers would need a crane to help with their search, volunteers organized for one to enter the search site.

"This is a very time sensitive matter — you have someone who still has a heartbeat," said Melissa Fathallah, a 42 year old protestor, of Thursday night's suspension of the operation. "So we're going to do the best we can to get to that heartbeat and get to that person while they're still alive."

In the end, volunteers organized for a crane to enter the search site. It arrived a few hours later, and the rescue mission resumed.

Following the explosion, thousands of volunteers flooded Beirut to clear rubble from blocked streets and fix the damaged homes of those affected in the blast. Fathallah, herself part of a volunteer aid initiative, said volunteers moved in to fill the vacuum left by negligent governance.

"Our saying now is, 'We are the government,'" she said.

As the Topos team and local rescuers worked through the rubble over the course of 72 hours, the Chilean team's sensors continued to detect respiratory cycles. But by the end of the search on Saturday, Lermanda, the team's leader, said three levels of the collapsed building had been searched, and no survivors were found. Not even a body was recovered.

Lermanda said the breathing cycles detected by the highly sensitive equipment may have come from someone on one of their own rescue teams.

The rescue mission captured a broken nation clinging to a shred of hope. And although no one was rescued, many Lebanese expressed relief that no one had been left to suffer inside for weeks.

In a tweet, the economist and political activist Jad Chaaban expressed satisfaction that Chilean and Lebanese rescue teams had worked diligently to uncover a possible survivor.

"At least the Chilean and Lebanese rescue teams tried. At least they gave all their hearts and sweat. Especially when those in charge did not care about doing massive searches, just asking people if they know someone living there," he wrote.