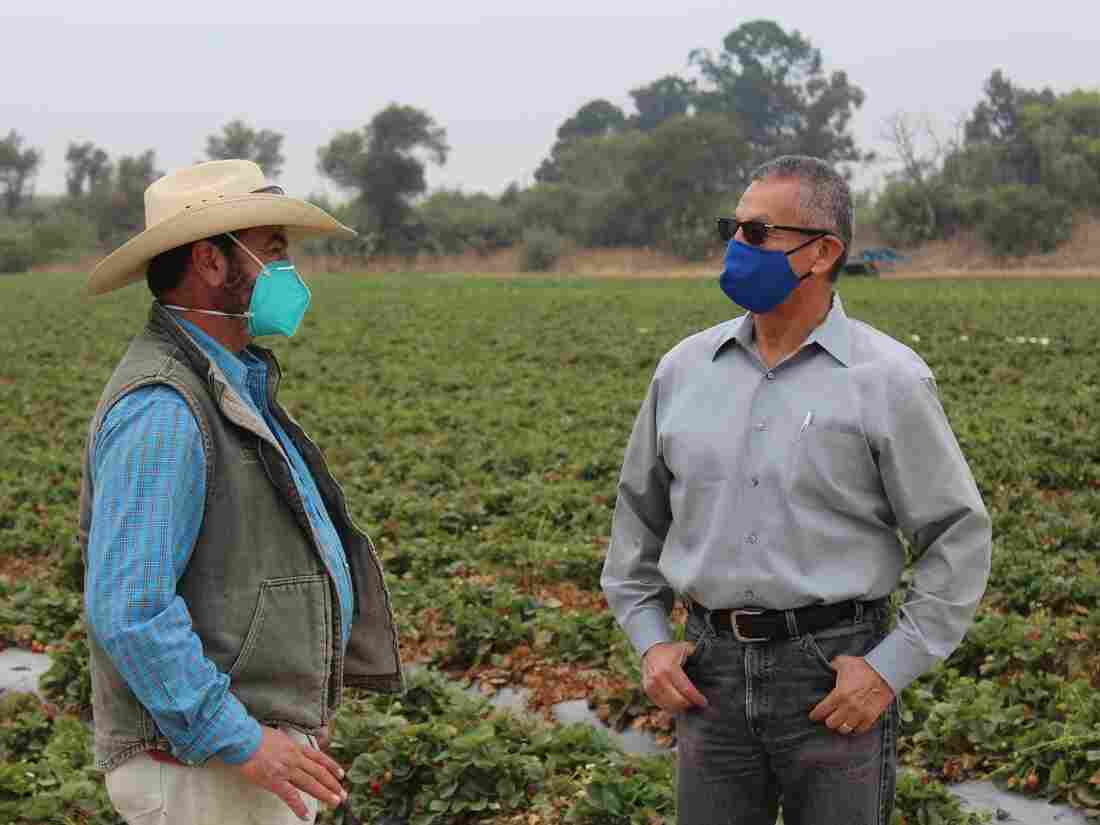 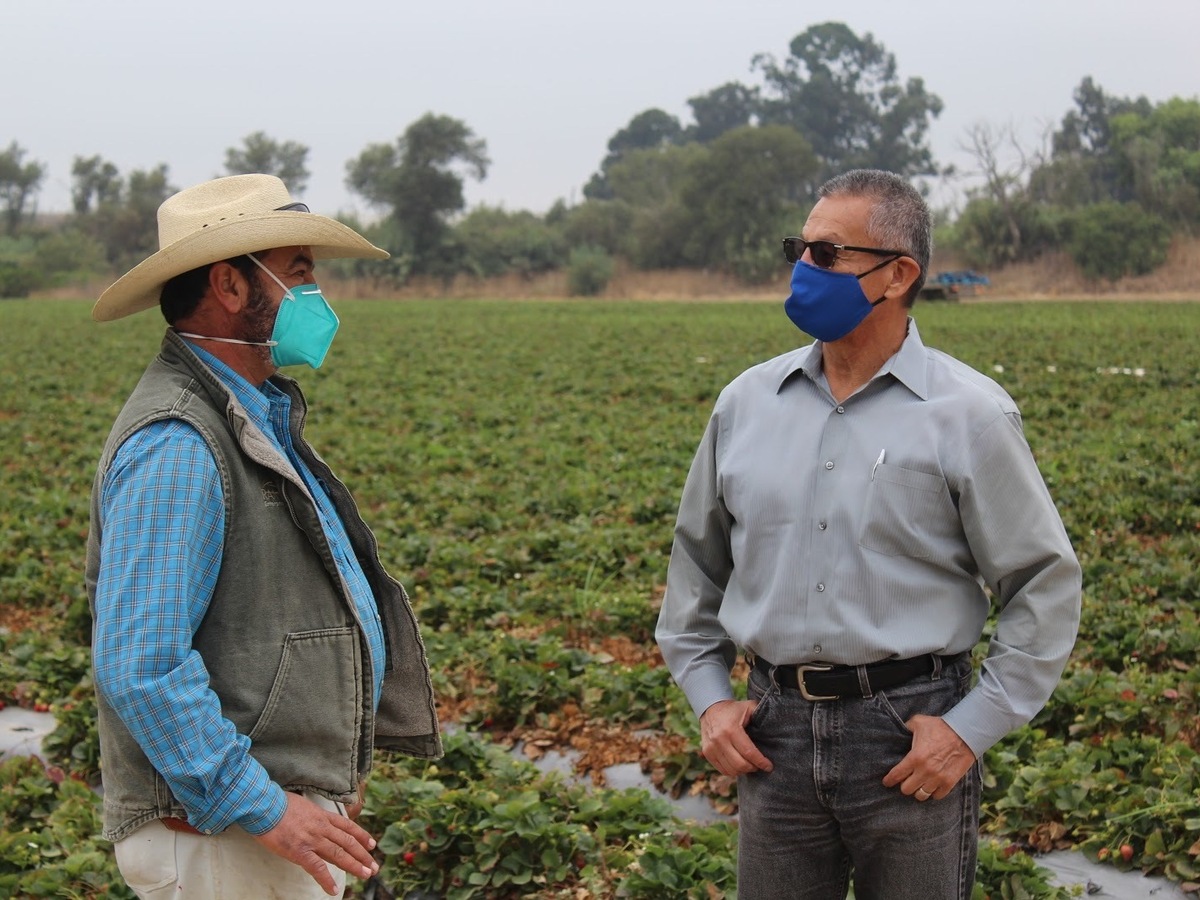 With precision, farm workers swiftly harvest rows of strawberries at an organic field in Salinas, Calif. It's hard work, even without a global pandemic and wildfires burning in the background.

Four major wildfires erupted across the state's Central Coast in mid-August, one near Salinas. Smoke blanketed the region, the sun glowed orange and ash rained down.

"It hurt our sinuses," said Jesús Ahumada, an agricultural foreman, in Spanish. "The smoke was so thick."

Ahumada leans up against his white pickup truck, which stands out against the green field. He supervises 65 farm workers. When the smoke was unbearable, they made a decision together to stop for their safety. They stopped for one day, Ahumada said.

That wasn't an easy call. Farm workers are paid at least minimum wage, but earn more money the more crates they fill.

Dr. Caroline Kennedy, medical director of the Clinic Services Bureau at the Monterey County Health Department, says it's been one hardship after another for the people who harvest our food; first COVID-19, now wildfire. Kennedy directs nine clinics in a county where agriculture is a leading industry.

Monterey County is home to the Salinas Valley, which is called the "Salad Bowl of the World." Here, vast farm fields of lettuce, broccoli and strawberries feed the entire country.

These farm workers, who are predominantly Latino, are disproportionately affected by the coronavirus. In Monterey County, more than 70 percent of COVID-19 cases are among Latinos.

Kennedy said housing is just one root cause, "Often, they go back to very congested living situations and everyone in the family is infected."

COVID-19 patients tell her they just can't take a deep breath, even weeks after being diagnosed. Or, they say, heavy labor is difficult. All of that is compounded by wildfire smoke. But, Kennedy said, when you're behind on bills, it's a tough choice to make.

"Do you stay home when the air quality doesn't make you feel well, or do you just go back to work?" Kennedy said.

A year ago, California's Division of Occupational Safety and Health, or Cal/OSHA, implemented new standards for protecting outdoor workers from wildfire smoke. It requires employers to provide proper respiratory protection equipment, such as N-95 masks, when air quality is harmful. Whether or not use of a mask is voluntary or required depends on how bad the air quality is.

The messaging is confusing, according to Richard Stedman, executive director for the Monterey Bay Air Resources District, which monitors air quality across Santa Cruz, San Benito and Monterey counties. When the air is bad, the general public is told to stay indoors.

"So when I see workers being advised that they can go out into the field and exert themselves as long as they have, in their possession, a mask, that's... that's not very protective," said Stedman.

According to the United Farm Workers, enforcement of the regulation is also problematic.

During Pandemic, Farmworkers Kept Their Jobs And Raised Risk Of Infection

The labor union conducted a statewide poll in late August to get a better understanding of the situation. Armando Elenes, UFW's secretary treasurer, said of the 350 workers who responded, many from California's Central Valley, about 84% said they didn't get a mask. Workers told Elenes they could see the haze and felt a burning sensation in their eyes.

But, he said, it's difficult to think about long-term health impacts when you're just trying to figure out next week.

"They, unfortunately, were more worried about trying to make ends meet and trying to pay the rent," Elenes said.

With over a dozen wildfires burning in California and a global pandemic that's making N-95s hard to find, the state's Office of Emergency Services answered calls for help. It shipped around 1.4 million masks to county agricultural commissioners in 35 counties.

Monterey County Agricultural Commission Henry Gonzales received over 330,000. He called them a godsend considering their scarcity.

Gonzales knows first-hand what this job takes. He was a migrant farm worker when he was a child. He said showing up to this job can be a risk, but the fruit and vegetables don't wait.

"They're ready when they're ready. And if you're not there to harvest, they're going to go waste," Gonzales said.

Waste that means less money for companies, smaller paychecks for farm workers and fewer strawberries in grocery carts; losses that might be necessary to protect farm workers' health.