Accessibility links
Philippines Pardons U.S. Marine In Killing Of Transgender Woman Lance Cpl. Joseph Scott Pemberton, 25, was sentenced in 2015 to a term of six to 12 years for homicide, a sentence that was later reduced to 10 years. 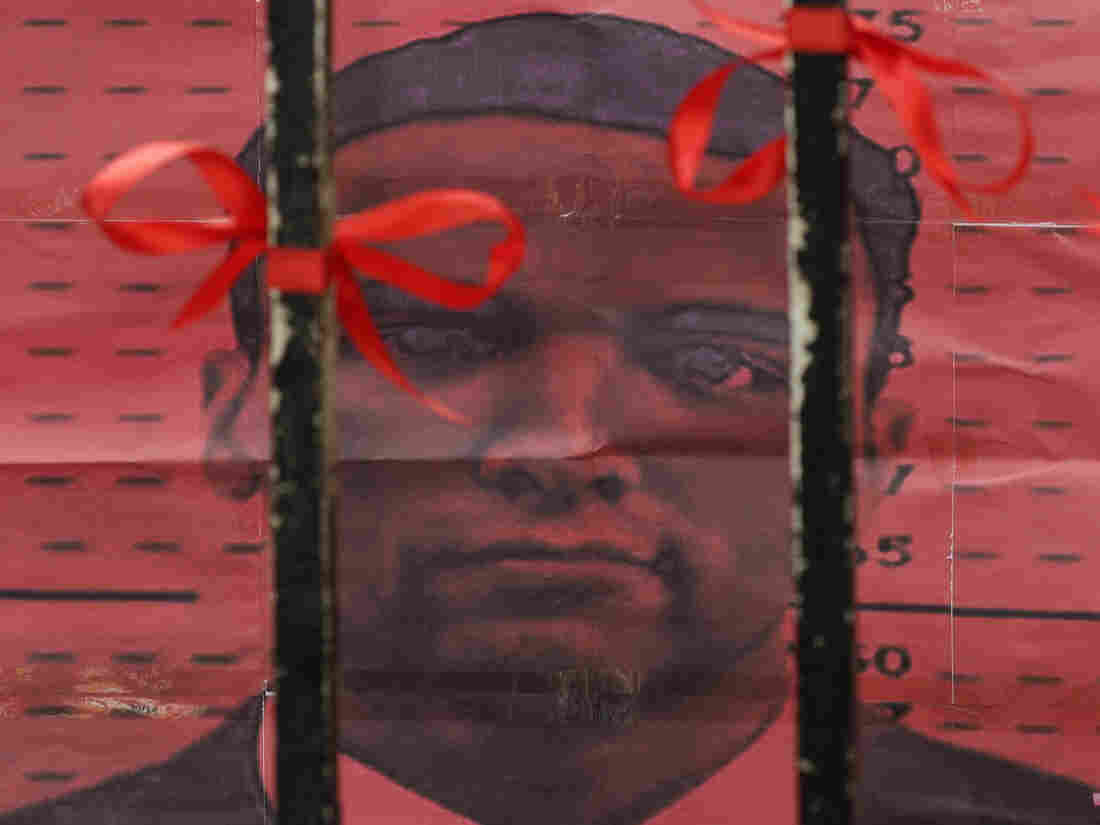 U.S. Marine Lance Cpl. Joseph Scott Pemberton is seen from behind the gates of the Department of Justice in Manila, Philippines. Philippines President Rodrigo Duterte granted Pemberton a pardon following his conviction in the 2014 killing of a transgender Filipino woman. Aaron Favila/AP hide caption 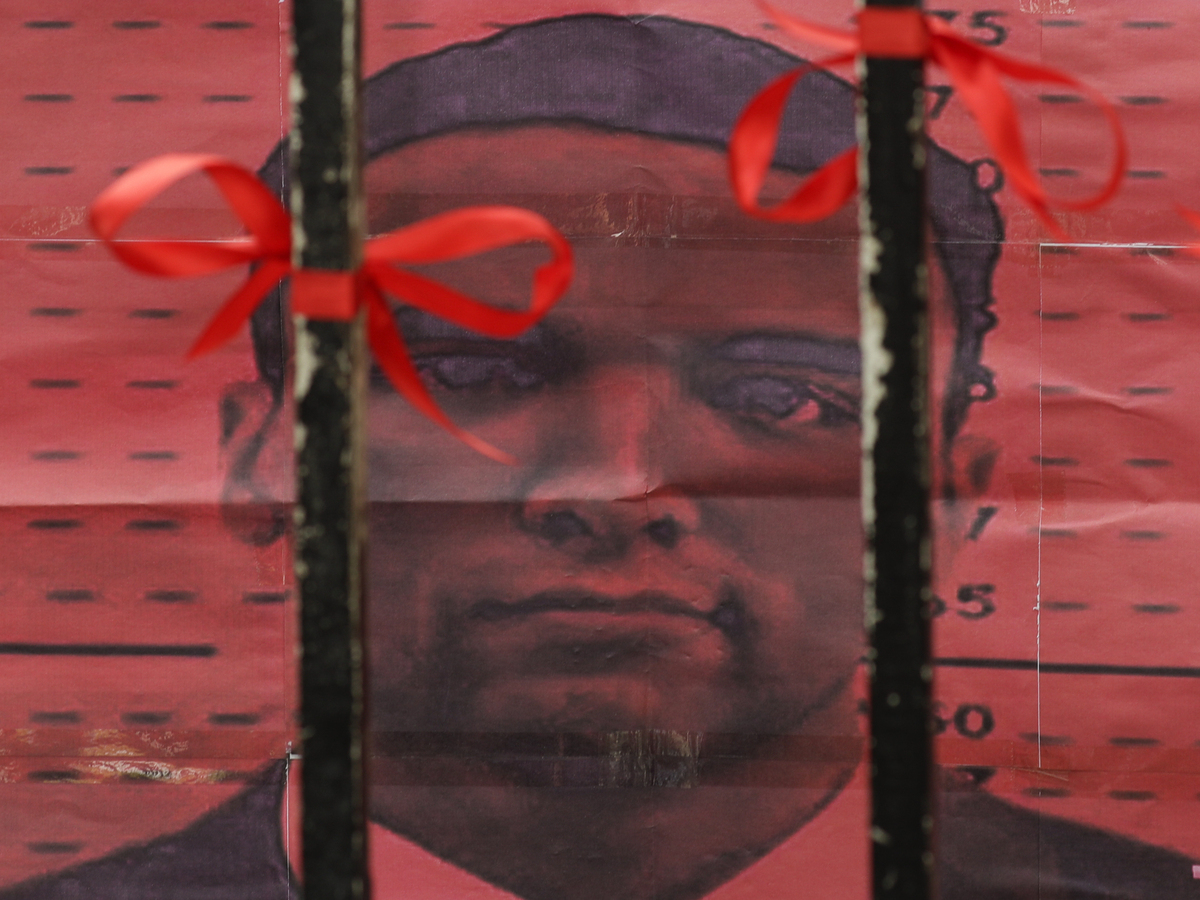 U.S. Marine Lance Cpl. Joseph Scott Pemberton is seen from behind the gates of the Department of Justice in Manila, Philippines. Philippines President Rodrigo Duterte granted Pemberton a pardon following his conviction in the 2014 killing of a transgender Filipino woman.

The surprise move to free the 25-year-old American Marine comes just days after the president's office said it would intervene to block his early release.

The pardon has angered Philippine nationalists who resent the U.S., and gay and transgender groups who fear the decision encourages hate crimes against them.

Pemberton was sentenced in 2015 to a term of six to 12 years for homicide, a sentence that was later reduced to 10 years. Prosecutors sought the more serious charge of murder but the judge at the time downgraded the charge because the element of "treachery" had not been proved.

Pemberton, then 19, and 26-year-old Jennifer Laude had met in a nightclub outside Subic Bay, a former U.S. naval base, when he was in the Philippines for joint military exercises in 2014. Closed circuit television video presented at trial showed the two entering a hotel together, and he is seen leaving alone. A hotel worker found Laude dead, her head slumped over a toilet with a broken neck.

The corporal testified that there had been a scuffle in which he put Laude into a headlock but that she had been alive when he left the room.

Hearing of his release, a lawyer for Pemberton quoted the serviceman as saying, "I am very happy." Attorney Rowena Garcia-Flores said when she met with him a few days ago, he expressed a willingness to apologize to the Laude family, even belatedly.

A lawyer for Laude's family called the pardon "revolting" and said it makes "a mockery of the judicial and legal systems in the Philippines."

The early release order rekindled perceptions that American military personnel who run afoul of Philippine laws can get special treatment.

Last week, presidential spokesman Harry Roque had said in a news conference, "Our compatriot cannot be treated like an animal." He said that Pemberton's "light penalty" showed that "Americans continue to have the status of conquering colonials in our country."

Pemberton, an anti-tank missile operator from New Bedford, Mass., was one of thousands of Americans who have participated in exercises under the U.S. Philippines Visiting Forces Agreement, the legal framework for the temporary visits of U.S. forces.

Duterte ended the allies' agreement earlier this year, but later backtracked and lifted the termination.

On Monday he reversed course in the case of Pemberton, granting him a full pardon.

Aides said the decision to pardon Pemberton advanced the president's stated foreign policy to be friends to all, enemies to none. Duterte defended his decision in a public address that aired Monday, asserting that Pemberton "should be allowed the good character presumption," because he had behaved well behind bars. "If there is a time when you are called upon to be fair, be fair," Duterte said.

Laude family lawyer Virgie Suarez was quoted by The Washington Post as saying, "There are too many Filipino convicts already in their twilight years serving their sentence." Suarez said, "Why give it [the pardon] to a foreigner, a U.S. soldier who committed an atrocious crime?"

The president's spokesman said that while Duterte's pardon has "erased whatever punishment" Pemberton faced, "what will never be erased in the president's mind is the conviction of Pemberton, who is a killer."

During his four years in office, Duterte has frequently pursued a hostile line toward the United States, decrying it as a former colonial power, while he gravitated toward China.

The pardon could help to mend those strains. It comes at a time when Chinese aggressiveness in the South China Sea has unified neighboring countries, including the Philippines, unsettled by China's behavior in the disputed waters.

The decision has sparked protest from several quarters.

Christine Palabay, secretary general of the left-wing activist group Karapatan, said in a statement that the pardon of Pemberton "is a hard slap on the LGBTQ community and a blatant affront to our national sovereignty."