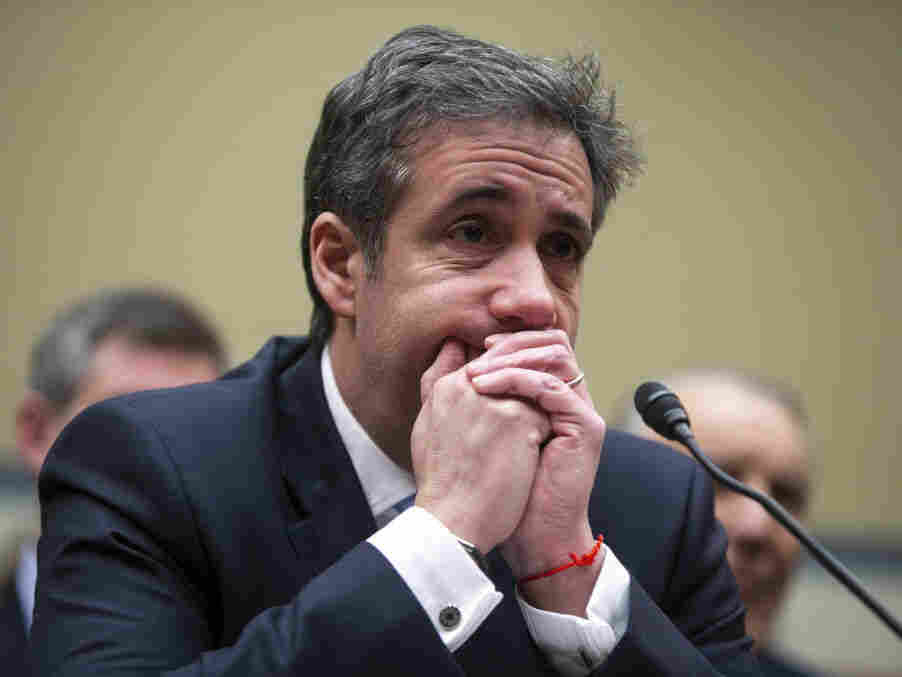 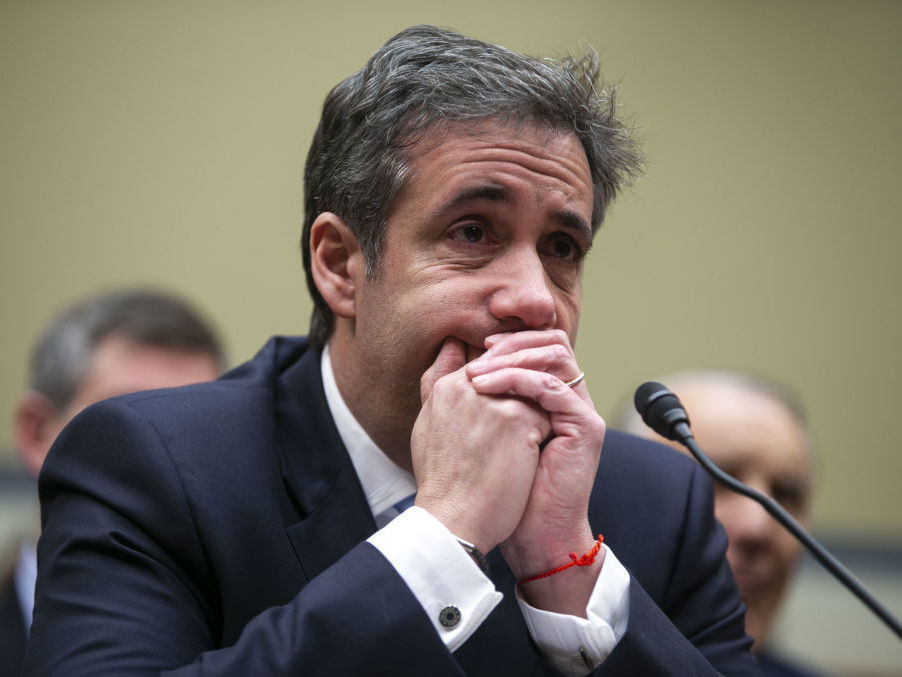 Long before he came into office, Donald Trump was so preoccupied with then-President Barack Obama that he hired a look-alike actor — a "faux-Bama" — to castigate and then pretend to fire on video.

That's just one of many episodes recounted and accusations levied by Michael Cohen, Trump's former personal attorney, in his new book, Disloyal: A Memoir, which is being published Tuesday and which NPR obtained before its publication.

Cohen includes a photograph of the "faux-Bama" episode in which Trump is seated at a desk across from a man who looks vaguely like the 44th American president. In the middle of Trump's desk are two books, one of which has "Barack Obama" emblazoned across the front. (Allegedly, the video was made for the 2012 Republican National Convention, but not used. If true, the incident is a remarkable ouroboros of a reality TV star cosplaying political power, who then comes to hold exactly that political power.) 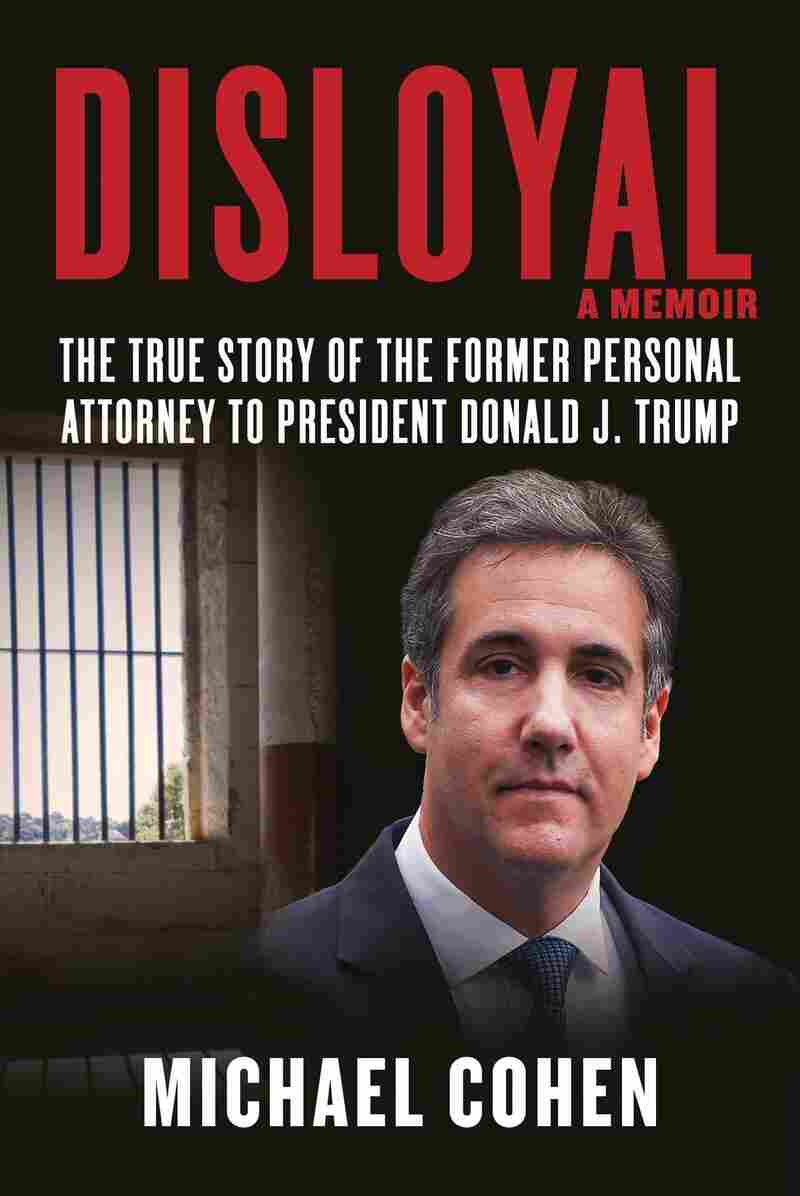 In Disloyal, Cohen describes the many years he says he spent as a faithful soldier, first as a teenager who read and reread Trump's book The Art of the Deal, later as a successful taxi-medallion owner and personal injury lawyer who bought his dream home in a Trump-branded property on Manhattan's Upper East Side, then as a loyal lieutenant in Trump's inner circle for many years, and finally as a spurned figure whom the president cast aside.

White House press secretary Kayleigh McEnany has dismissed Cohen, saying that he is attempting to profit off lies with this book.

Over Disloyal's 400-plus pages, Cohen rips through accounts of dozens of incidents, ranging from Trump allegedly cheating mom-and-pop vendors for services rendered at Trump properties to those of the president making racist remarks to his own involvement in trying to make a deal for a Trump Tower in Moscow. That's in addition to Cohen's narrative of the payoff that Trump made to adult film actress Stormy Daniels shortly before the 2016 presidential election — which was made via Cohen.

According to Cohen, Trump told his former lawyer that Black and Latino voters were "too stupid" to vote for him, and said that any country run by Black leaders was a "sh**hole." On another occasion, after the death of South African President Nelson Mandela, Cohen says that Trump told him that apartheid-era South Africa had been "beautiful" and that Mandela had "f***** the whole country up."

Cohen also goes in deep on what he describes as the president's idolization of Russian President Vladimir Putin, whom he says Trump reveres because of his immense personal wealth and his immersive control of his country. "An entire society and civilization bent to the will of a single man was how Trump viewed the ideal historical form of government," Cohen writes. "With him as the man in charge, of course."

Cohen also alleges several episodes in which he says Trump was casually sexist to women and grabbed women in the Trump Organization office and kissed them on the lips.

In describing the runup to the 2016 presidential election, Cohen describes how the campaign and Trump allegedly used the media to boost him to victory. "The biggest influence by far" in Trump's victory, Cohen argues, "was the media. ... Rallies broadcast live, tweets, press conferences, idiotic interviews, 24-7 wall-to-wall coverage, all without spending a penny."

In addition, Cohen fills out details on his assertion that the Trump team fixed online polls to enhance the then-candidate's reputation — utilizing the services of Liberty University's John Gauger — and how closely he worked with David Pecker, the former CEO of American Media, whose publications include the National Enquirer, to "catch and kill" allegations of Trump's relationships with women as well as to take down political rivals, including Sen. Ted Cruz.

Cohen also describes how he personally alternated between trying to butter up and bully reporters. The latter includes NPR's Tim Mak when at his former employer, the Daily Beast, Mak reported an allegation that Trump's former wife, Ivana Trump, had accused him of raping her during the couple's divorce proceedings. According to Cohen, he told Mak that if he pursued the story, that he would go after the journalist personally along with "everybody else you possibly know," adding: "I'm warning you, tread very f****** lightly, because what I'm going to do to you is going to be f****** disgusting. Do you understand me?" (The New York tough-guy tone is no accident: Cohen describes at length how he saw himself as a consigliere in an organization not unlike the Mafia.)

But, Cohen says, he also saw something quite different as well: "I bore witness to the real man, in strip clubs, shady business meetings," he writes, "and in the unguarded moments when he revealed who he really was: a cheat, a liar, a fraud, a bully, a racist, a predator, a con man."

As is typical in political memoirs, Cohen also saves space for some petty score-settling, reserving particular disdain for one of his nemeses in the White House, former Trump campaign manager Corey Lewandowski as well as Trump's son-in-law Jared Kushner, whom he describes as "an aristocratic man-child possessed of supreme arrogance and a completely amoral will to power."

Cohen says he began writing Disloyal from prison, where he was sentenced after pleading guilty in 2018 to lying to Congress and for financial crimes and campaign finance violations involving hush-money payments made to women who have said that they had sexual relationships with Trump.

Cohen was released earlier this year and placed on home confinement due to coronavirus concerns. After his initial release, the Federal Bureau of Prisons returned him to prison, saying that he had refused the conditions of his release; in July, a federal judge ordered him back to home confinement, finding that it was retaliation for Cohen's plans to publish his book.