Accessibility links
Many Black People Say Police Killings Aren't 'Going To Be Fixed Overnight' Many Black Americans who spoke to NPR said while they don't believe this current movement will change everything today, they hope it will help lead to change in generations to come. 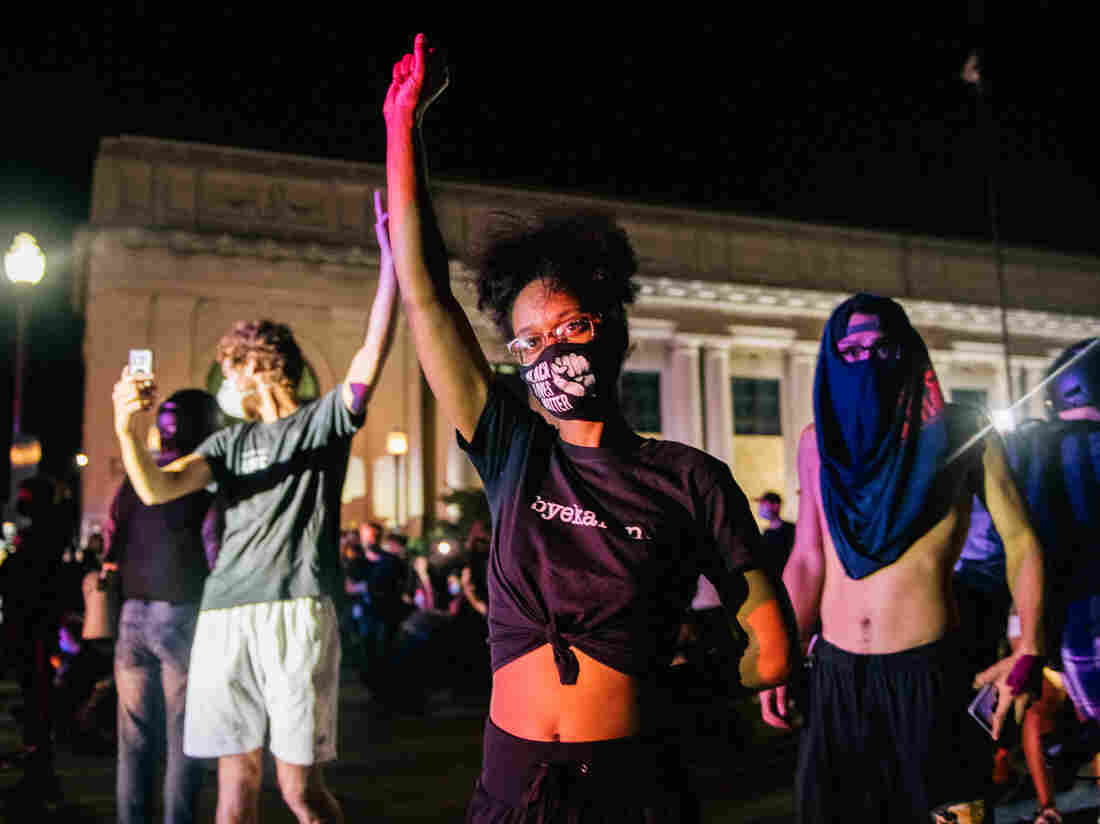 Protesters raise their fist in the air in front of law enforcement last month in Kenosha, Wis., after the police shooting of Jacob Blake. Brandon Bell/Getty Images hide caption 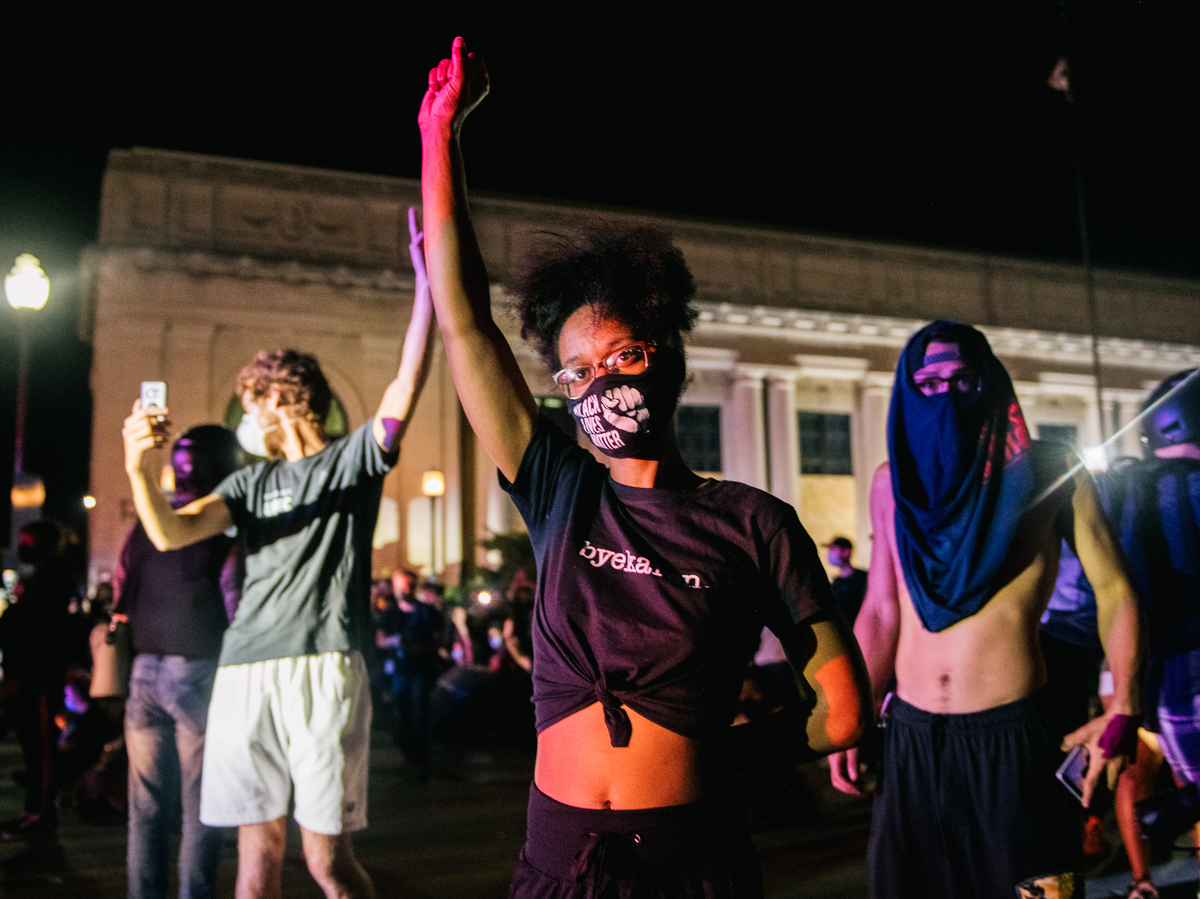 Protesters raise their fist in the air in front of law enforcement last month in Kenosha, Wis., after the police shooting of Jacob Blake.

The police shooting of Jacob Blake in Kenosa, Wis., resonated with Roy Divine, who grew up 30 miles from the Milwaukee suburb, but says it "didn't feel that different" than the police killing of George Floyd that sparked nationwide protests earlier this summer.

"This isn't going to be fixed overnight, but I'm optimistic that young folks and the older folks like myself who support them understand and accept that it's going to take some time," he said. "And the change is going to come, and we're committed to seeing that change."

Divine and other Black Americans told NPR that while they don't believe this movement for racial justice will change much today, they hope it will help down the line. This summer, amid a national reckoning on race, NPR has been asking Black Americans to share their personal stories and their views on recent events.

The shooting of two Black men has bookended the summer: Floyd was killed by Minneapolis police on Memorial Day, and Blake was paralyzed after being shot in the back by a police officer in late August in Kenosha.

Protests exploded last month in Kenosha, where two protesters, Anthony M. Huber and Joseph Rosembaum, were fatally shot. Kyle Rittenhouse, 17, faces homicide charges in connection with those shootings. And protests broke out Wednesday in New York over the death of Daniel Prude, a Black man who died of asphyxiation after being restrained during an arrest in Rochester in March.

While Americans are increasingly polarized along racial and political party lines, nearly 65% of Americans agreed in a recent poll by Ipsos for NPR that the country "needs to continue making changes to give Black Americans equal rights with white Americans."

Only 13% said that it is "very likely" that police treatment of Black Americans will improve in the coming years, and another 48% said it is "somewhat likely," the poll shows. Ipsos conducted the poll of 1,008 U.S. adults Aug. 28-31. Its margin of error for the overall sample is 3 percentage points.

Keyana Miller, 23, a sixth-grade teacher in Chattanooga, Tenn., told NPR she doesn't think this moment is a tipping point, but she said she'll see change in her lifetime.

Black Activist Burnout: 'You Can't Do This Work If You're Running On Empty'

Miller said her grandmother had "colored" written on her marriage license. "I cannot even believe or cannot even fathom that today."

Levi Blue, a 28-year-old gene therapy researcher in Durham, N.C., said he is hopeful that Americans are seeing the movement in a "different light." "Now we're here at this point in 2020, where it seems like now more of America is starting to come to the realization [that Black Lives Matter] as well on its own."

"I definitely in my own time didn't have to face what some of my ancestors did," Blue said, adding that as his generation benefits from the activism of the ones before him, he hopes those after him will have that same opportunity. "I don't have to drink from the colored water fountain or nothing like that. So I'm reaping the benefits of what they went through at that time. But I also do think it is up to our generation as well to continue that fight so that more people after us will be able to reap more benefits as well."

Nearly 500 people have responded since NPR reached out to Black Americans in early June. Some described how this moment does — and does not — feel like a turning point for racial justice in the United States.

"I'm positive that a change is going to come," said Divine, 51, who now lives in Madison, Wis. "I do believe that this younger generation, folks that are my kids' age and younger, they get it."

Divine has three daughters and believes that as they, and their peers, come into positions of power, they will help create a culture in which racial justice is more attainable.

"And so as they become a little bit more empowered, and grow, not just empowered, but are in power, they will be able to make those changes."

Aaron Lawrence, a 37-year-old community college counselor who lives in Sacramento, Calif., told NPR that when he started at his job, there were just three counselors of color. Now, there are seven, and that representation has led him to be more hopeful for the future of racial justice in the country. He said his students are interested in the movement, which makes him feel encouraged.

"There's more representation, which brings more resistance," Lawrence said. "I'm hopeful because there are more fighters and there are more people speaking the right language of change that needs to be had, and it needs to be had in certain areas. You're hearing that at a national stage. I just hope it leads to action and it doesn't fizzle out like a flavor of the month type of thing with Black Lives Matter because that's known to happen at different institutional levels."

Mary Frances Berry, an author, a professor of American social thought and history at the University of Pennsylvania and former chairwoman of the U.S. Commission on Civil Rights from 1993 to 2004, said in July that this is likely the largest movement for racial justice following the civil rights movement in the 1960s and the 1890s movement for reparations.

But she said she also believes this could be one more in a series of changes that helps the movement become significant enough to cause a larger, more important change.

"So far as I can tell, the movement has a Black Lives Matter agenda, which they came up with before this massive protest, but that most of the things that are on that agenda are not being discussed by the people who make policy decisions," Berry said.

The Black Lives Matter movement started in 2013 to "build local power and to intervene when violence was inflicted on Black communities by the state and vigilantes," according to its website, and the organization is working to create a "world free of anti-Blackness, where every Black person has the social, economic, and political power to thrive." It is calling for many changes to the current system, including a #WhatMatters2020 campaign that encourages Black voters to go to the polls by increasing voter registration, combating disinformation and educating constituents. The primary issues for #WhatMatters2020 range from economic justice to health care to criminal justice reform.

Some activists are calling for changes such as those included in the 8 Can't Wait campaign, from banning chokeholds to requiring de-escalation techniques. But other activists are fighting for changes of the 8 to Abolition campaign, which includes defunding the police, freeing people from jail and providing public housing. These movements have yet to see the kind of long-term changes they are looking for, especially on the federal level.

"I see a moment," Leslie Watkins, a 52-year-old attorney from Dallas, told NPR. "And I think from this moment comes incremental change. I see legislative efforts, I see on the local level, state levels, national levels, but you can already start to see it fizzle out some, the attention to it, the passion behind it."

While federal changes have stalled, local changes are being made. The Minneapolis City Council is moving to eliminate the city's police department and replace it with "a department of community safety an violence prevention." Louisville, Ky., banned no-knock warrants. The Seattle City Council voted to redirect some police department funding, leading Seattle Police Chief Carmen Best to resign. And San Francisco Mayor London Breed plans to redirect millions of dollars away from law enforcement.

Meanwhile, some school districts, including those in Minneapolis and Portland, Ore., have canceled their contracts with police departments.

"[This moment] has created some sort of organic something in people's minds that this is something that has to be addressed," Watkins said. "And maybe it's not our generation. Maybe it's the next generation. Maybe it's the next generation after that. So I think it's not a tipping point, but one of those steps in the progression of history that brings us to a good point in this country. We're not at that point yet, but I think this is getting us closer."