Accessibility links
Peru Locked Down Early. Now It Battles One Of The Worst Coronavirus Outbreaks Peru's per capita COVID-19 death rate is higher than any nation's except for tiny San Marino. The government's awareness campaign slogan is "COVID does not kill by itself. Let's not be accomplices." 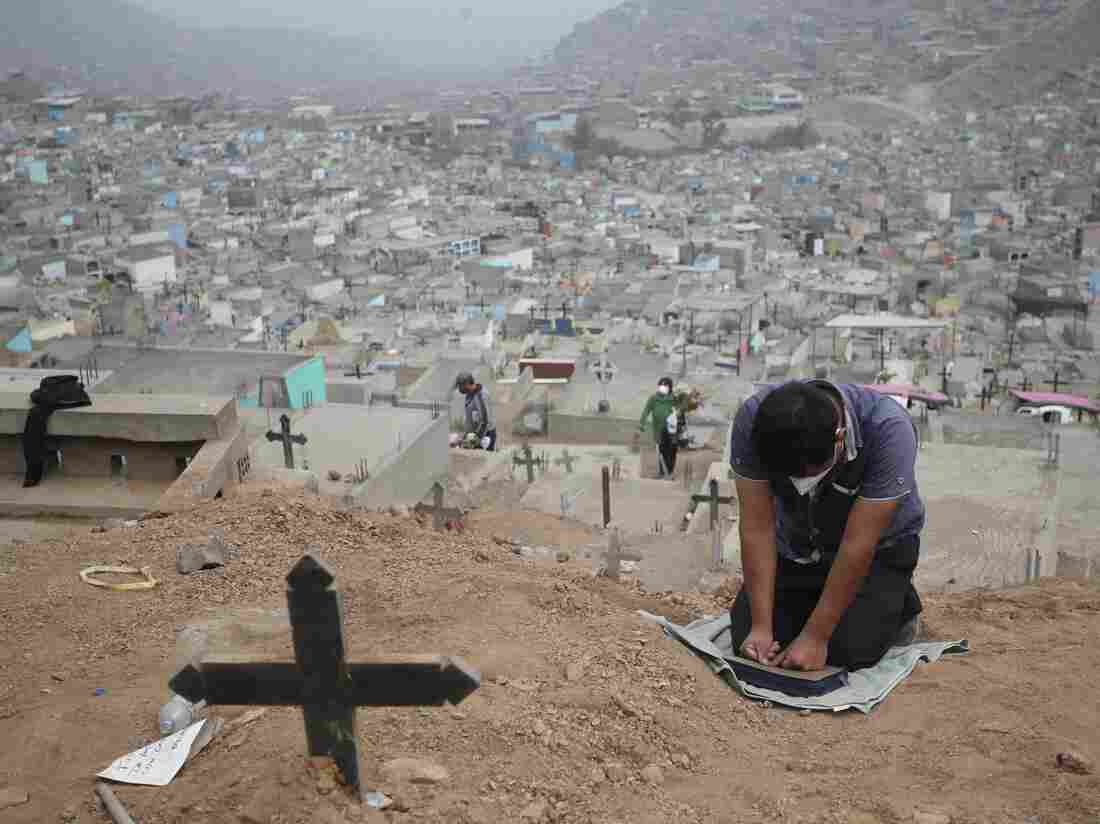 A relative prays at the Mártires 19 de Julio Cemetery on the outskirts of Lima, Peru, on Aug. 20. Peru has one of the world's highest per capita coronavirus-related death tolls, according to Johns Hopkins University. Raul Sifuentes/Getty Images hide caption 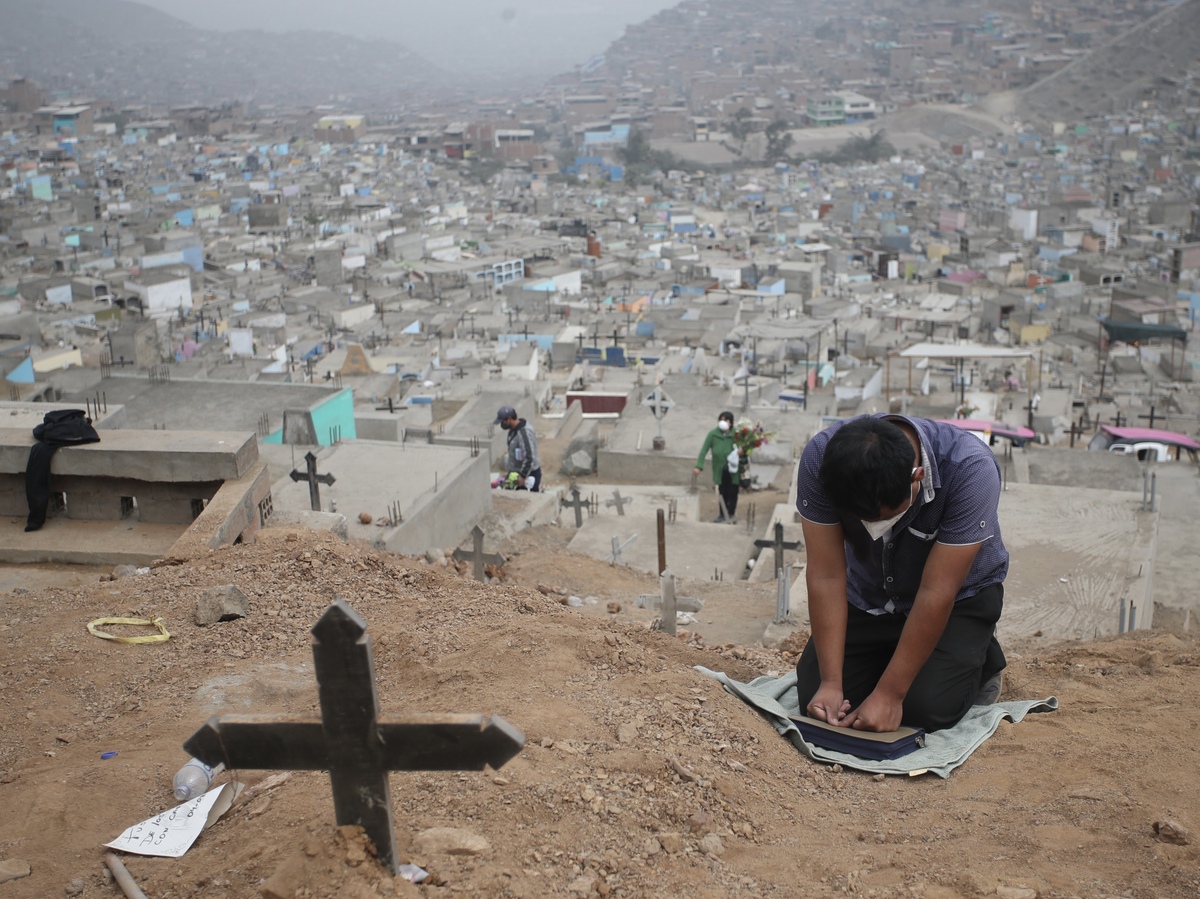 A relative prays at the Mártires 19 de Julio Cemetery on the outskirts of Lima, Peru, on Aug. 20. Peru has one of the world's highest per capita coronavirus-related death tolls, according to Johns Hopkins University.

Peru's government has launched a campaign of emotional shock tactics to persuade its citizens to help stop the coronavirus from causing more death and misery in a country with one of Latin America's biggest outbreaks.

Peruvian President Martín Vizcarra acknowledges the campaign "may seem too harsh." Yet he says: "We are in a war. ... You have to call things as they are."

The "war" that Vizcarra says they are waging is a result of the virus's painful and unexpectedly widespread impact on his country of more than 30 million people. Peru has now registered almost 30,000 coronavirus-related deaths, the largest toll in Latin America after Brazil and Mexico. That is despite the Peruvian government's imposing a nationwide quarantine less than two weeks after detecting the country's first case on March 6.

Peru's per capita COVID-19 mortality rate of 93.28 per 100,000 is higher than that of any other nation except the tiny European republic of San Marino (population: 34,000), according to an analysis by Johns Hopkins University.

The awareness campaign has the slogan "COVID does not kill by itself. Let's not be accomplices." Half-a-minute, heart-wrenching videos are being broadcast on Peruvian TV and shared online in an effort to drive home the case for masks and social distancing.

They show scenes from everyday life — people happily cracking open beers on a street corner, men playing a soccer game and a family visiting a grandmother.

After a few seconds, the scene abruptly cuts to the consequences: an elderly relative on a ventilator in a hospital, gasping for breath.

The need for such hard-hitting messages was underscored on Aug. 22 by a tragedy at the Thomas Restobar nightclub in Lima, the capital. The club held an illegal Saturday night party that was raided by the police. There was panic. Thirteen people died in the ensuing stampede. Officials later revealed that 11 of the dead tested positive for the coronavirus.

13 Killed In Stampede At Peru Nightclub Operating Against Health Orders

The scale of the pandemic has left Peruvians feeling "sad and angry," says veteran Lima-based journalist Jacqueline Fowks. It has also ignited debate about what has gone wrong and why.

Fowks cites the fact that 7 out of 10 Peruvian workers are in the informal sector and often "couldn't afford to isolate" because they're dependent on daily earnings.

But she also lays much of the blame on the country's "very poor" health system, which failed to conduct effective testing and contact tracing and, in some areas, collapsed.

Before the coronavirus pandemic, Peru had one of the region's strongest economies, thanks to a commodities boom. Yet while average health spending per capita in Latin America and the Caribbean was $1,026 in 2017, Peru spent only $680, according to the Organization for Economic Cooperation and Development.

The Peruvian government had plans to increase the health budget but failed to carry these out, says Dr. Godofredo Talavera, president of the Peruvian Medical Federation.

"The government doesn't fulfill its promises," he told NPR, as he stood within a throng of angry doctors and nurses at a recent protest rally outside the Health Ministry. "We don't have oxygen! We don't have ventilators!" he said.

No one disputes that Peru is being hit hard by the pandemic, yet some believe the official numbers for coronavirus infections and deaths are inflated. Peru has mostly relied on rapid testing that measures only antibodies, says Dr. Rubén Mayorga, the World Health Organization's representative in Peru.

Mayorga says these show if someone had the virus at some point: "You can have somebody who has [died of] ... something else, but since you have a COVID-19 antibody test, you will be declared as having died of COVID."

What is not in doubt, however, is the devastating economic impact of the virus on Peru. Its gross domestic product in April was about 40% lower than it was the same month last year, a record decline. The speed with which the economy is shrinking has since slowed, but the country's Economy Ministry estimates output to be down 12% in 2020 overall.

Miguel Jaramillo, an economics expert with the Lima-based think tank Grade, expects parts of the economy to rebound quickly. But he says he is concerned about "the long-term consequences of the loss of human capital — a generation that is going to have a very hard time finding a job."

Jaramillo says that four years ago, he was a member of a presidential commission into the reform of social protection. Its findings came to nothing. He hopes the pandemic will now prompt Peru to learn from past mistakes.

"I hope we don't waste this opportunity to ... create a real system of social protection and make a serious effort to formalize the economy," he says.

In the last few months, Ramos has lost more than two-thirds of his income. He has already laid off five of his seven employees. He says he loses sleep every night, lying awake and "trying to dream up ways of reinventing the business."

Others are still less fortunate. To see that, you only need visit the poorer parts of Lima, says journalist Fowks: "You will see a lot of people in the streets, walking around asking for money, asking for food, asking for any kind of help."