Accessibility links
Wild Boars Are Causing Havoc In Germany, But Humans Are Making It Worse They're stealing laptops and causing mayhem at children's birthday parties. Authorities warn if the boars rely on people for food, it could have dangerous consequences for both animals and humans. 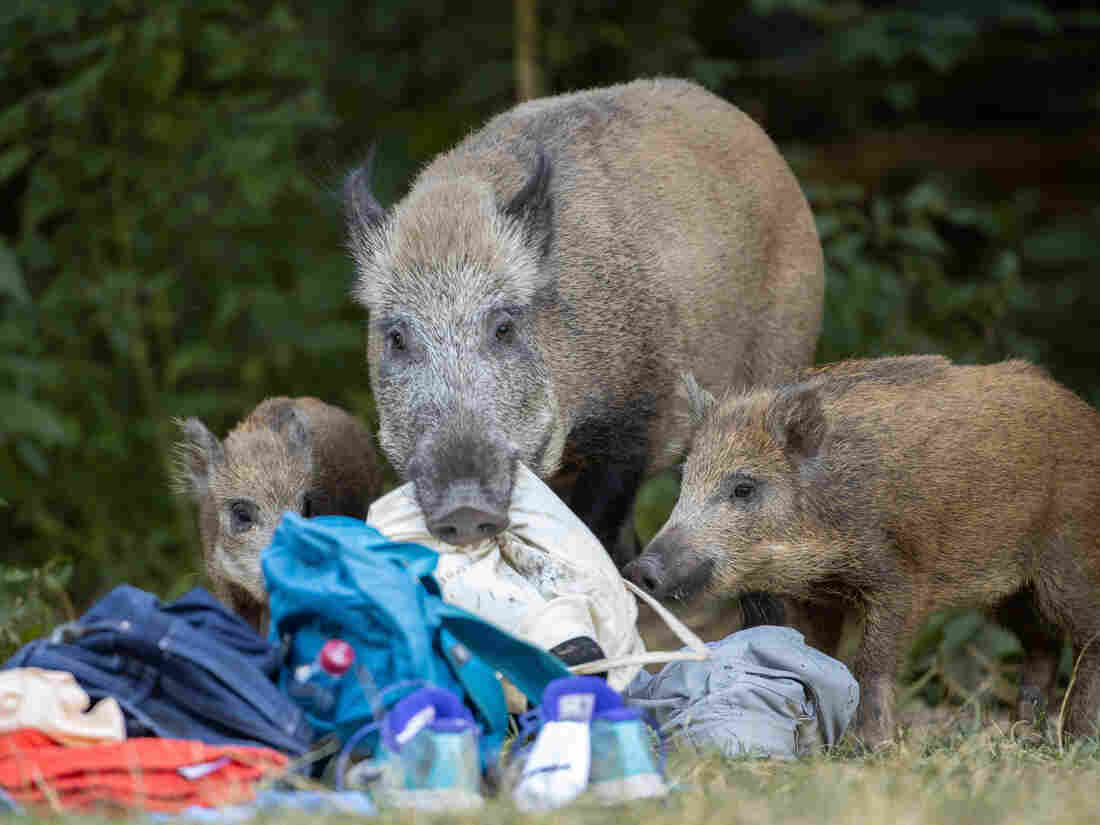 A wild boar and two of its young roam around Teufelssee, or Devil's Lake, in Germany in August. Ingolf König-Jablonski/dpa/picture alliance via Getty Images hide caption 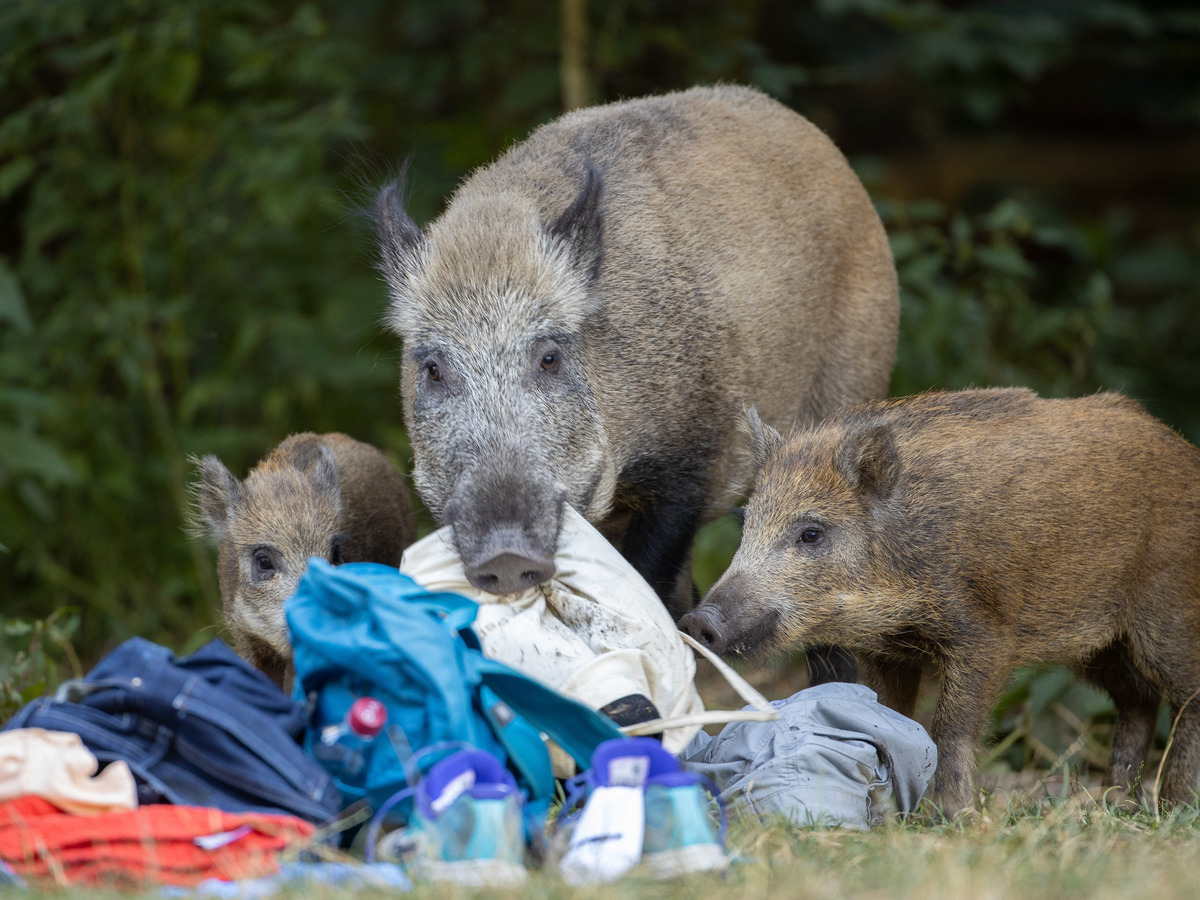 A wild boar and two of its young roam around Teufelssee, or Devil's Lake, in Germany in August.

At first glance, swimmers along Germany's Baltic coast thought the creature swimming toward them was a dog. A sailor had seen the animal, too, miles away from shore in the open sea, and thought it was a porpoise. But they were all mistaken. It was a wild boar.

The animal had been swimming for hours. From where? Nobody knew, but judging from a video taken of its arrival in mid-August, it didn't seem tired from the journey.

After paddling ashore at Schönhagen beach in northern Germany, the boar tried to bite a man, who defended himself with a shovel, before it scurried away through hordes of panicked sunbathers.

The episode was just the latest in a summer when wild boars popped up repeatedly, leading to viral photos and videos, their antics shared millions of times.

The Central European boar has coarse hair, tiny eyes and sharp teeth connected to powerful jaws. The wild boar subspecies is native to Germany, and when confronted by humans, it is known to injure and occasionally kill.

This reputation seemed to be forgotten in early August when a female boar was photographed alongside her two piglets as she snatched a man's laptop in a bag at Teufelssee, or Devil's Lake, in Berlin, prompting the man to run after them. The scene was made more comical by the man's clothes: He wasn't wearing any. The lake is popular with nude sunbathers.

The photos went viral, and German animal rights activist Sonja Wende was one of millions who clicked on them. (The man managed to get his laptop back.)

"It was such a funny situation, where you have this cheeky little boar that is grabbing this laptop and running around the beach, and this naked man is chasing after her and trying his best to get his laptop back," Wende says. "There was no damage for anyone, except everybody was just having a blast and there was so much fun."

The fun didn't last long. The following week, tourists from across the region flocked to the lake to catch a glimpse of the boar, nicknamed Elsa, and her cute piglets. The crowds led animal experts to worry that the boars would soon come to depend on humans for food, which could ultimately endanger their lives — and people's safety.

Experts are worried about these boars contracting African swine fever from eating diseased pork among the rubbish humans leave behind. If that should happen, it would likely lead to an outbreak in Germany. There have been outbreaks in Poland in the past year.

"The situation got to be worse because there were more people coming to see them, and they were getting close and closer to the animals," recalls Marc Franusch of the Berlin Forestry Commission. "And then many of them take some food and they think it's a sign of having a heart for wild boars if we bring them some food. But it's quite the opposite."

So many came to see the boars, Franusch says, that at one point they surrounded Elsa and her piglets in a tight circle, a situation that could have easily spurred the mother boar to attack someone.

"So we were forced to take a position, because we are responsible for the surroundings," he says.

A colleague of his at the forestry commission warned that authorities might have to kill Elsa and her piglets if the animals continue to rely on humans for food. When the food becomes scarce, the boars may attack people to get it.

The commission doesn't have specific plans to kill Elsa and her young, Franusch says. But he worries about what's going to happen in the autumn, when fewer people visit the lake and when she — and especially her piglets — have to find their own food.

"They are used to finding food in the surrounding[s] of people. They aren't able to find the necessary food in the forest area by themselves," he says. "They never learned this."

Franusch says it's likely that when winter comes, Elsa and her piglets will roam out of the forest into the suburbs of Berlin. They'll find food in garbage bins, a situation he says would not end well for them.

Wende has urged tourists to stop feeding the boars and maintain their distance. But it might be too late.

A video posted to Twitter at the end of August captures moments from what appears to be Elsa and her two piglets ransacking a children's birthday party near Teufelssee. Freelance journalist Charlie Hawley shot the video, which shows children scampering away or jumping into trees. Elsa and her piglets ate everything in sight.

Hawley says the boars scurried off before returning to eat as much cake and candy as they could.

At the end of the day, their bellies full of sugary human food, Elsa the boar and her piglets slept somewhere in the forest, maybe near Teufelssee. And they waited for the humans — with their food, their garbage, their clothing-optional beaches and their birthday parties — to return.

Esme Nicholson contributed to this report.