Accessibility links
Senators Push For Medal Of Honor For Late Black Medic Who Saved Lives At Normandy Cpl. Waverly Woodson Jr., a member of an African American battalion, treated scores of soldiers wounded on D-Day but was passed over for the medal. Lawmakers and relatives have tried to change that. 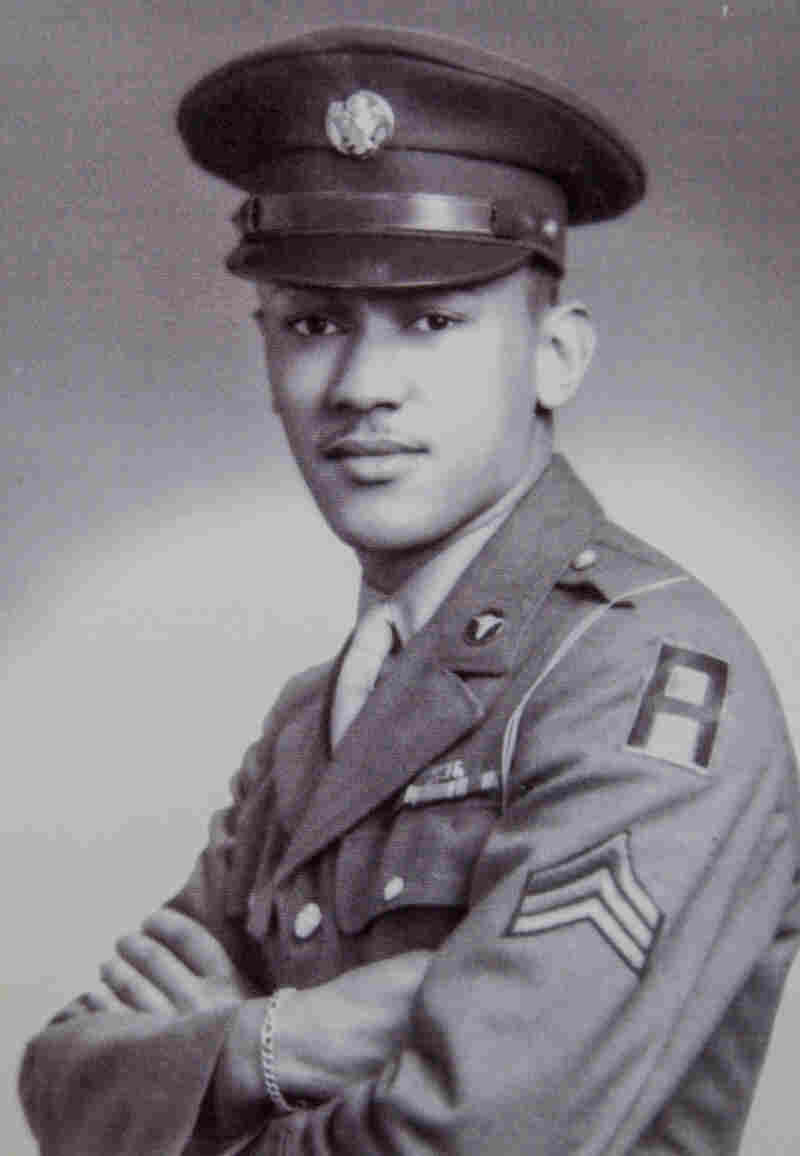 Cpl. Waverly B. Woodson Jr. was an Army medic in an African American battalion who helped save scores of lives at Normandy on D-Day. On Tuesday, U.S. lawmakers introduced legislation to posthumously award him a Medal of Honor. Woodson family via AP hide caption 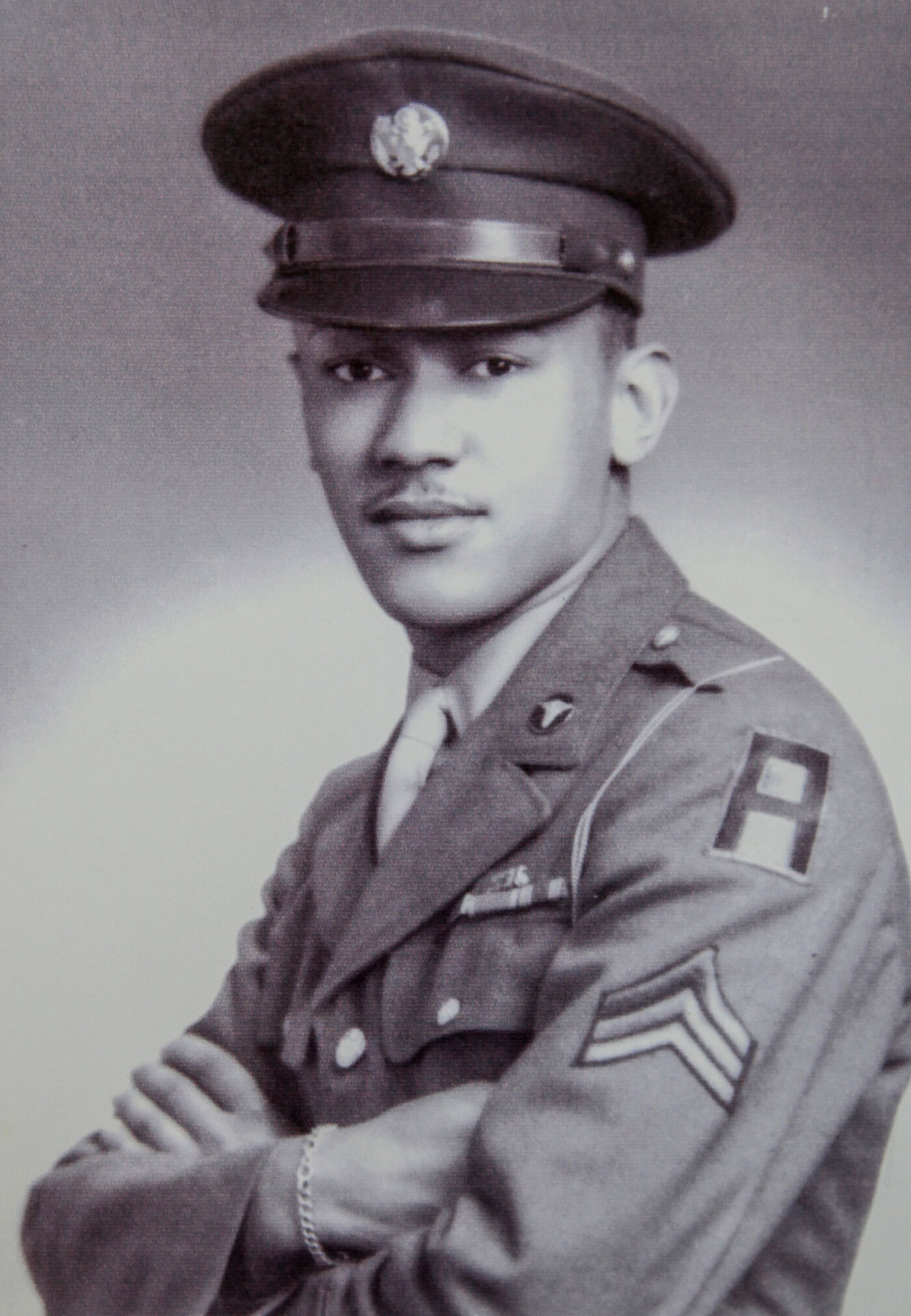 Cpl. Waverly B. Woodson Jr. was an Army medic in an African American battalion who helped save scores of lives at Normandy on D-Day. On Tuesday, U.S. lawmakers introduced legislation to posthumously award him a Medal of Honor.

Cpl. Waverly B. Woodson Jr. was an Army medic in the only all African American combat unit in the Normandy invasion on D-Day.

He got seriously wounded that June 6, 1944, but went on to help save scores of his fellow soldiers' lives.

On Tuesday, a bipartisan group of lawmakers introduced legislation to posthumously award Cpl. Woodson a Medal of Honor for his heroism.

"His valor was never fully recognized due to the color of his skin. That's unacceptable," said Democratic Sen. Chris Van Hollen of Maryland.

Woodson was part of the 320th Barrage Balloon Battalion, whose mission was to set up hydrogen-filled balloons and cables to deter Nazi planes from attacking.

Paris-based journalist Linda Hervieux wrote about the Black battalion in her 2015 book Forgotten. U.S. lawmakers have cited the work as supporting research in urging the military to review Woodson's case.

He worked through his pain to save lives.

Hervieux says Woodson was seriously injured before he made it to the shore of France's Omaha Beach. While on the landing craft, he was hit with shrapnel in his inner thigh and rear.

"He worked through his pain to save lives," Hervieux tells NPR. "He pulled out bullets, he patched wounds, he dispensed blood plasma, he amputated a right foot. And when he thought he could do no more, he rescued four drowning men. Thirty hours after, he collapsed from his own injuries."

Woodson survived and received a Purple Heart and Bronze Star Medal, but he was passed over for the highest honor. He died in 2005. 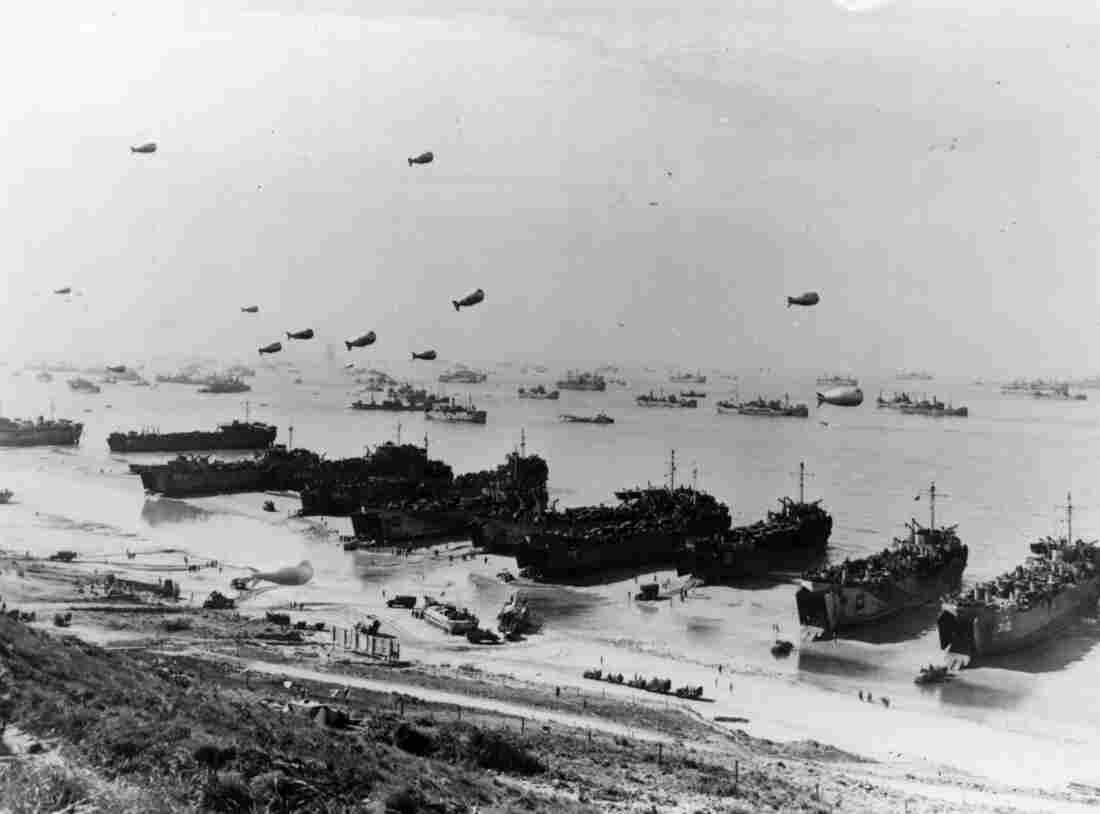 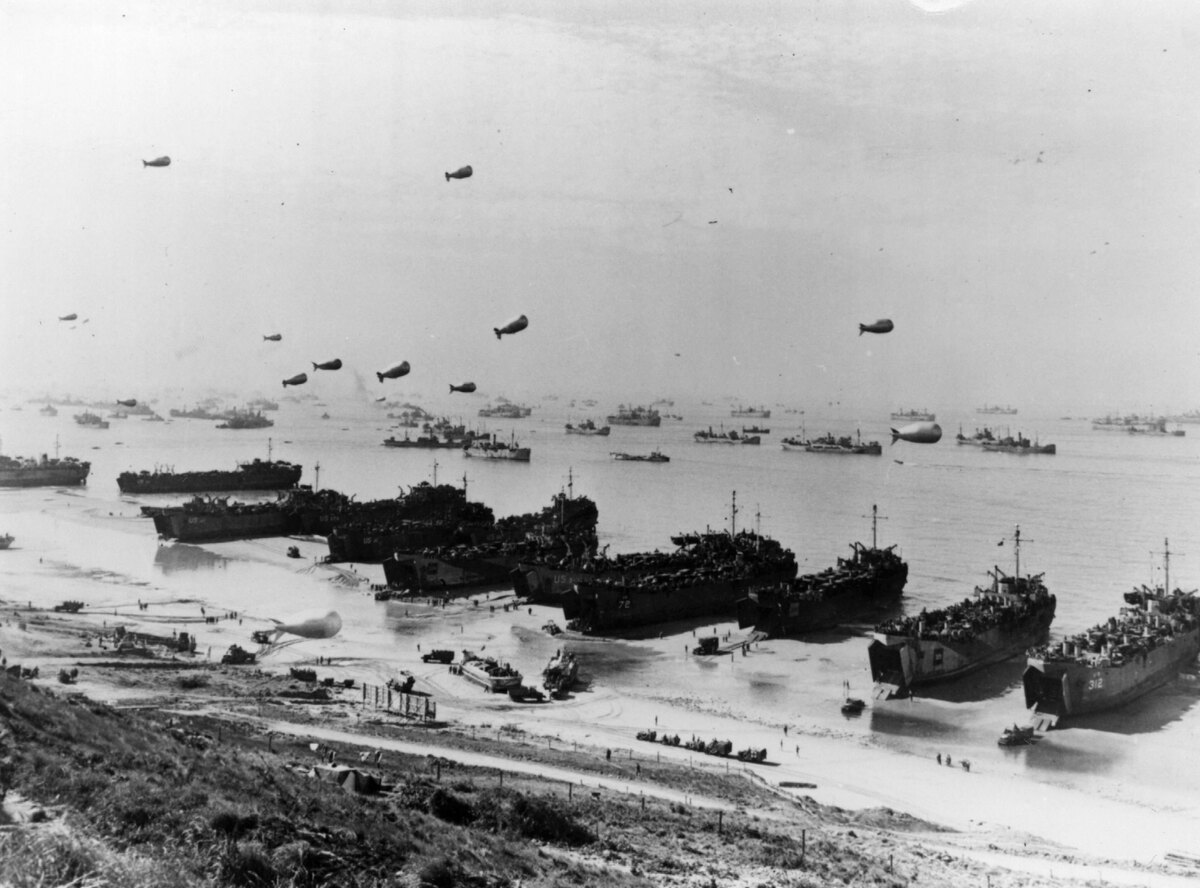 Barrage balloons and ships at Omaha Beach during the Allied assault in Normandy, France.

In 1997, President Bill Clinton belatedly awarded Medals of Honor to seven Black men who served in World War II. Woodson was not among them.

The Army has cited missing records as a reason for not reviewing the case. But many World War II archives were destroyed in the fire at the Army's Personnel Records Center in St. Louis in 1973. The lawmakers pushing for Woodson's recognition say the fire should not be a barrier.

According to Hervieux, there is considerable proof of Woodson's heroism that day.

In her research, she found a memo from a War Department aide to the Franklin Roosevelt White House. Reading from the letter, Hervieux says: "A Negro from Philadelphia has been recommended for a suitable award. ... This is big enough that the president can give it personally as he has in the case of some white boys."

Sen. Van Hollen, who has pushed for Woodson's greater recognition since 2015, said in a news conference Tuesday that the Medal of Honor is about correcting a historical injustice.

"One million Black Americans served during World War II — that's one in every 16 American service members," he said. "But of the hundreds of Medals of Honor awarded at that time, not a single one went to a Black service member."

When Woodson spoke about D-Day, he often said it didn't matter what color your skin was on Omaha Beach, according to Hervieux's research.

"There is no such thing as a color barrier, if I'm sitting here with material that you need as a white person. A bullet will kill you, it'll blow your head off," Woodson said in a 1994 interview with ABC News.

But there wasn't equality for Black soldiers in the segregated Army, or when they returned to Jim Crow America. Historians even maintained there were no Blacks among U.S. forces on D-Day, according to Hervieux. 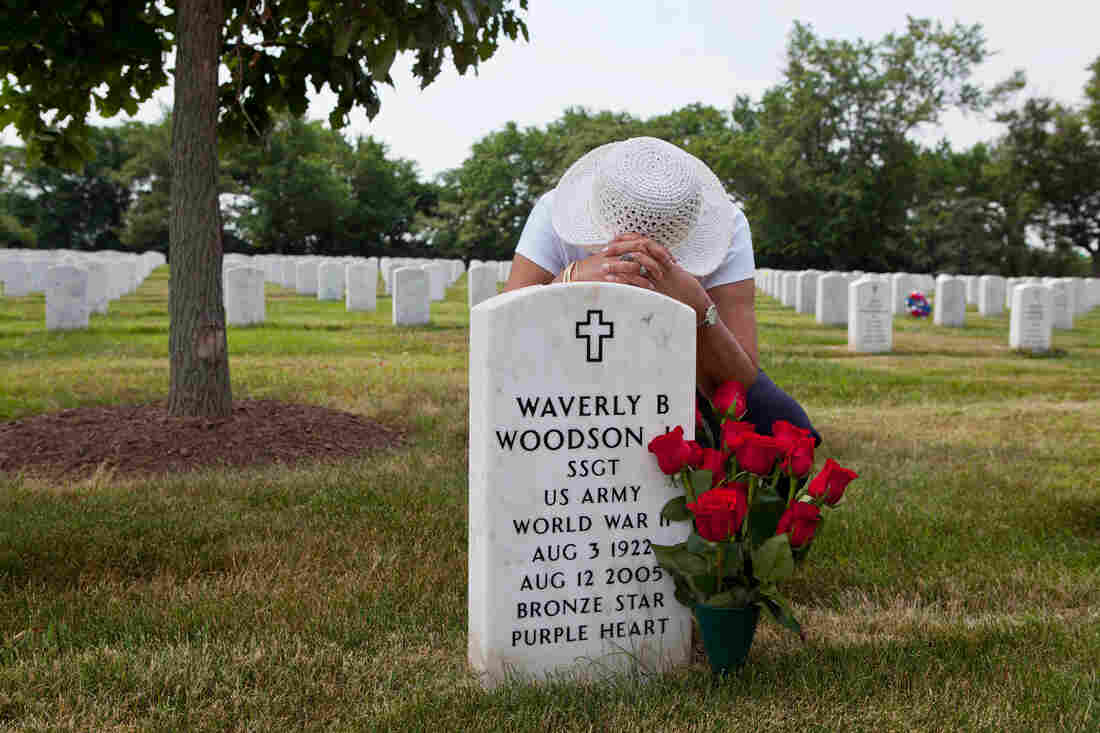 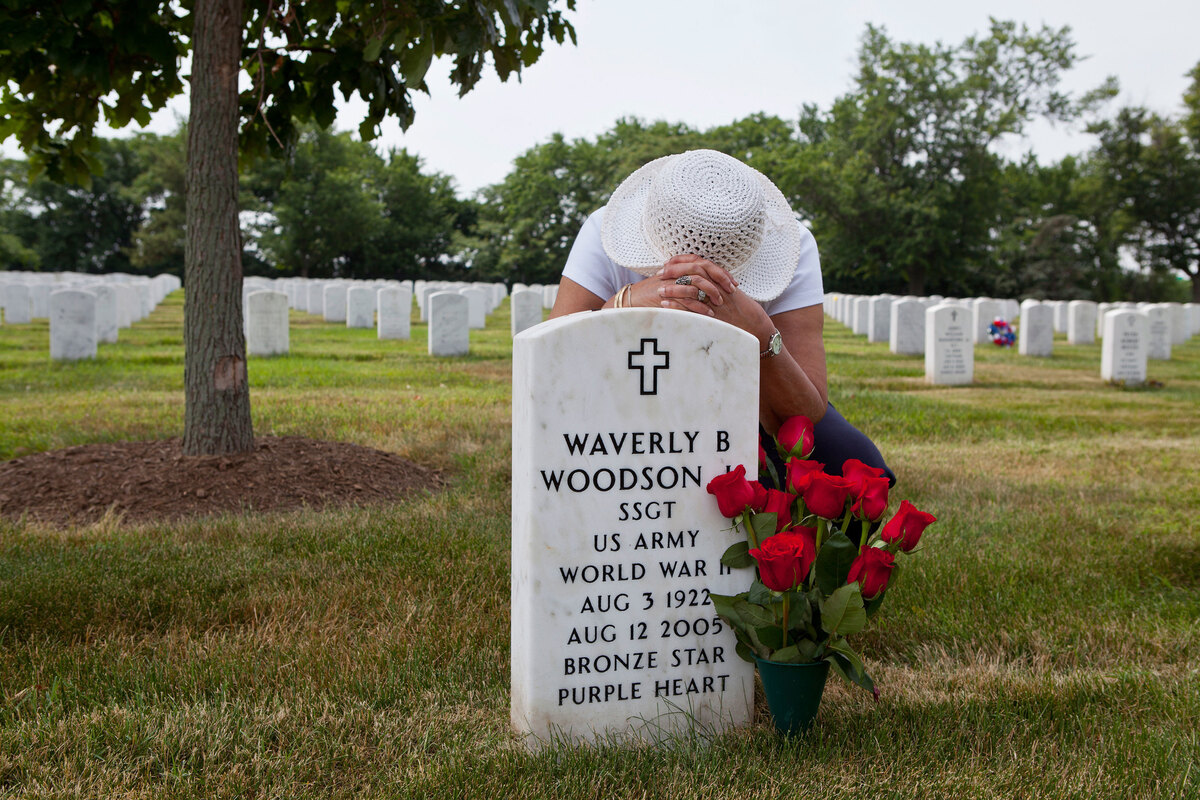 Joann Woodson kneels at the gravesite of her husband, Cpl. Waverly Woodson Jr., at Arlington National Cemetery in Arlington, Va.

"The memory of Black soldiers at D-Day has been scrubbed in many of our textbooks and on movie screens," she says.

Hervieux says she learned about the 320th battalion when the French government honored several members while marking the 65th anniversary of D-Day in 2009.

Fifteen years earlier, France awarded medals to Woodson and other battalion members, and invited the veterans and their families to Normandy.

Woodson's widow, Joan Woodson, says she has wonderful memories from the trip.

"They were so gracious to us, I will always remember that," she tells NPR over the phone from her home in Clarksburg, Md. "We were flown over on Air France and they treated us like royalty when we got there. It was an amazing moment."

Woodson, 91, has helped organize a petition and has been a major force behind the move to belatedly recognize her husband's valor.

"I feel that he deserves to have the recognition that he was denied or they didn't follow through with," she says. "Because everything he did, he definitely qualified to receive that honor."