Accessibility links
Robert Hadden, Ex-Doctor Accused Of Abusing Dozens Of Patients, Is Indicted Robert Hadden has been arrested in connection with the abuse of dozens of female patients, including minors. He has been accused of abuse in the past but avoided jail time in a previous case. 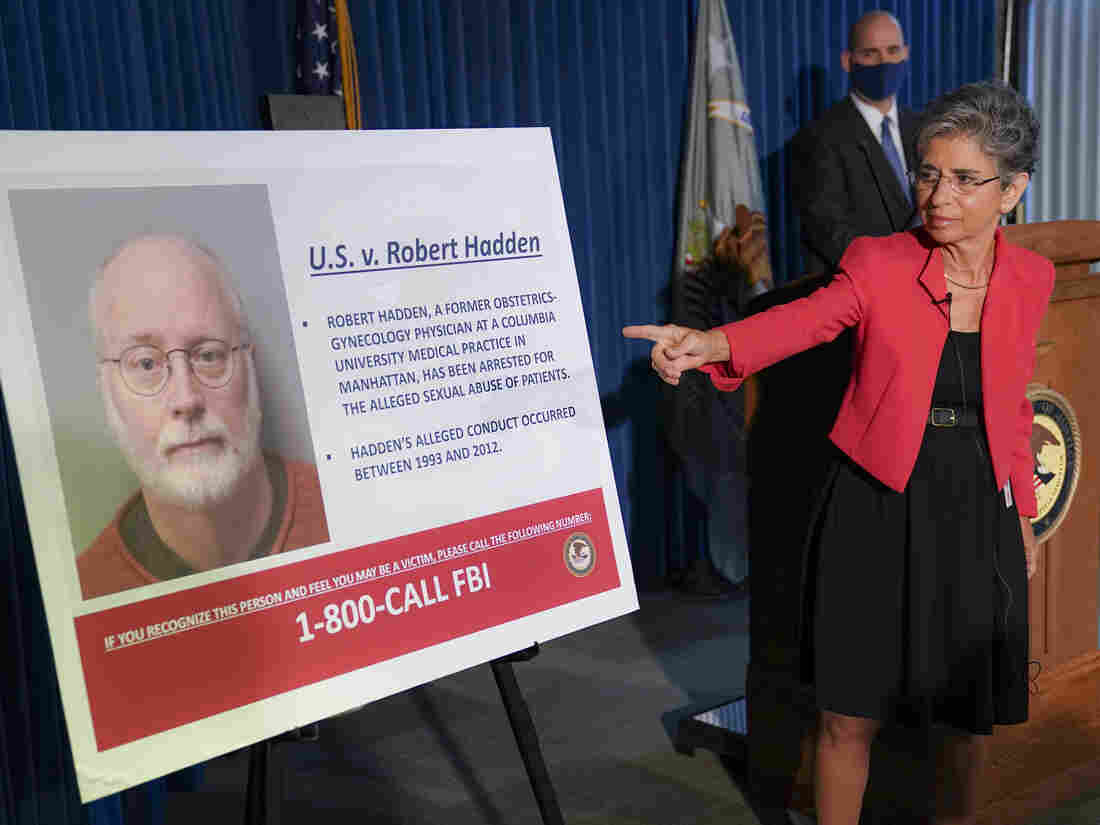 Audrey Strauss, acting U.S. attorney for the Southern District of New York, points to an image of Robert Hadden during a news conference Wednesday to announce his arrest and indictment. John Minchillo/AP hide caption 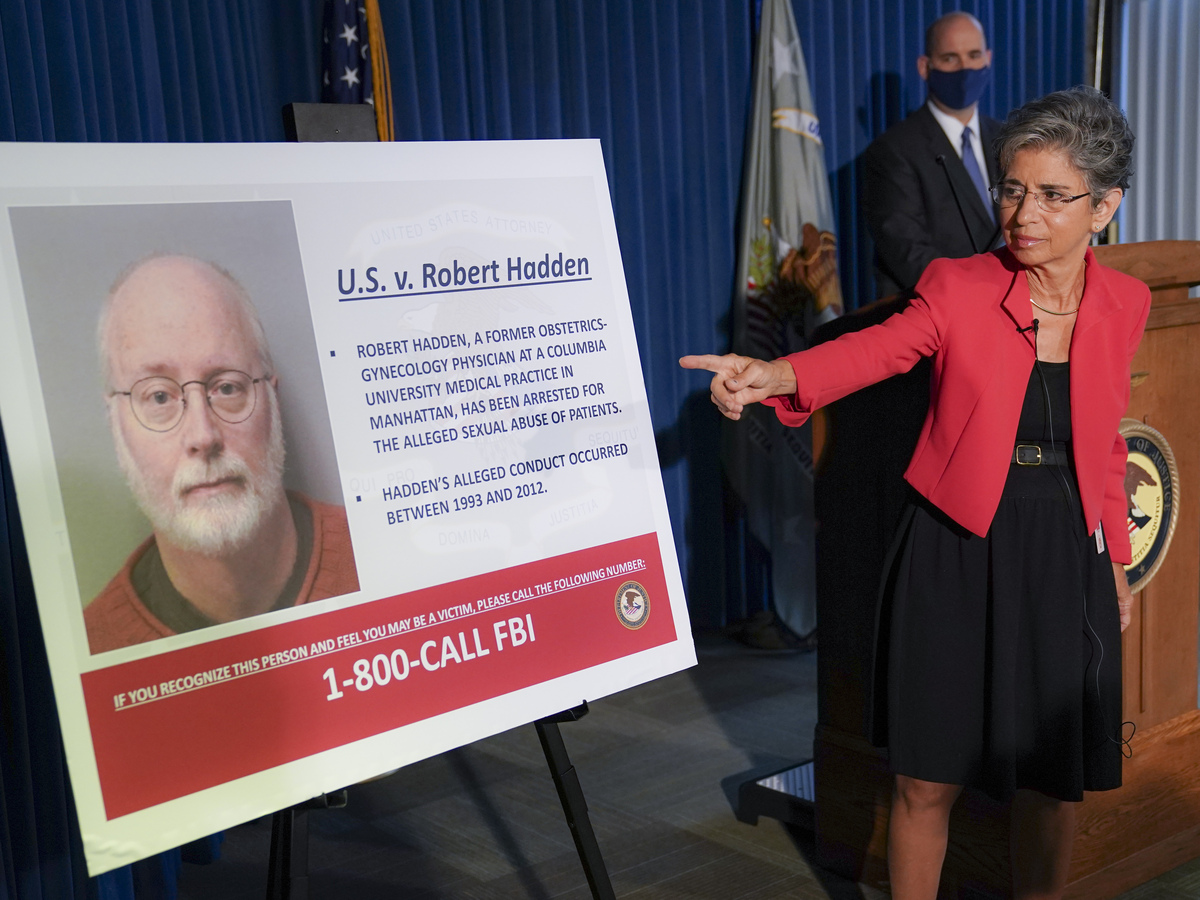 Audrey Strauss, acting U.S. attorney for the Southern District of New York, points to an image of Robert Hadden during a news conference Wednesday to announce his arrest and indictment.

For nearly 20 years, a Columbia University gynecologist in New York City sexually abused dozens of female patients, including minors, according to a federal indictment unsealed Wednesday.

Robert Hadden, 62, was arrested that morning in connection with sexual abuse that took place from 1993 to 2012, including acts against a young girl whom Hadden had delivered at birth, court documents say.

Audrey Strauss, the Acting United States Attorney for the Southern District of New York, described him as a "predator in a white coat"

Hadden is facing six federal counts of "enticing and inducing individuals to travel interstate to engage in illegal sexual activity." Each of those counts could carry a maximum of 20 years in prison.

The six alleged victims who crossed state lines were not identified by name in the indictment, and it's not clear if Evelyn Yang, who is the wife of former Democratic presidential candidate Andrew Yang and has publicly accused Hadden of abuse, is among them.

In an interview with CNN that aired in January, Yang said Hadden sexually abused her in 2012 when she was pregnant and under his care.

"It started with inappropriate questions ... that were unrelated to my health," Evelyn Yang told CNN. She said the doctor examined her more frequently than was medically necessary. "I feel like I put up with some inappropriate behavior that I didn't know at the time was straight-up sexual abuse/sexual assault."

Yang said the most serious assault happened when she was seven months pregnant. She said the doctor grabbed her and undressed her, then examined her internally without a glove on. There was no one else in the room, she added. "At that moment I knew it was wrong, I knew I was being assaulted."

It wasn't immediately clear if Hadden has legal representation in the face of the grand jury indictment; NPR reached out to a lawyer who previously represented him but did not immediately get a response.

This is not the first time Hadden has faced accusations of sexual abuse. The Manhattan District Attorney's Office pursued a case against him years ago, and he was indicted in 2014 for alleged criminal sex acts. Yang was among those who testified before a grand jury at the time.

Two years later, the district attorney's office agreed to a controversial plea deal that allowed the disgraced doctor to avoid jail time. As The New York Times reported, "under the agreement, Mr. Hadden gave up his medical license and pleaded guilty to a single felony count of criminal sexual act in the third degree, and one misdemeanor count of forcible touching."

In the indictment unsealed Wednesday, prosecutors describe a pattern of behavior similar to the one that Yang publicly recounted. They say he would arrange to be alone with patients by sending medical staff out of the room, then worked to gain their trust by sharing information about himself and asking them personal questions.

He allegedly "inappropriately touched, squeezed and even licked his victims in the course of what his victims thought were medically necessary gynecological and obstetric examinations," Strauss said.

Many of his alleged victims were young and unfamiliar with what would be considered normal during a visit to the gynecologist, prosecutors said.

"The abusive behavior alleged here took place over the course of nearly two decades, which means there could be many victims out there we have not heard from," said William Sweeney Jr., the assistant director in charge of the FBI's New York Field Office.

In a tweet about the federal indictment, Yang said, "Thank you to everyone who made today possible."