Accessibility links
Trump's Attacks Put Military In 'Presidential Campaign Minefield' President Trump came into office with high praise for current and former generals, but now he's attacking them in ways that are unprecedented, according to military analysts. 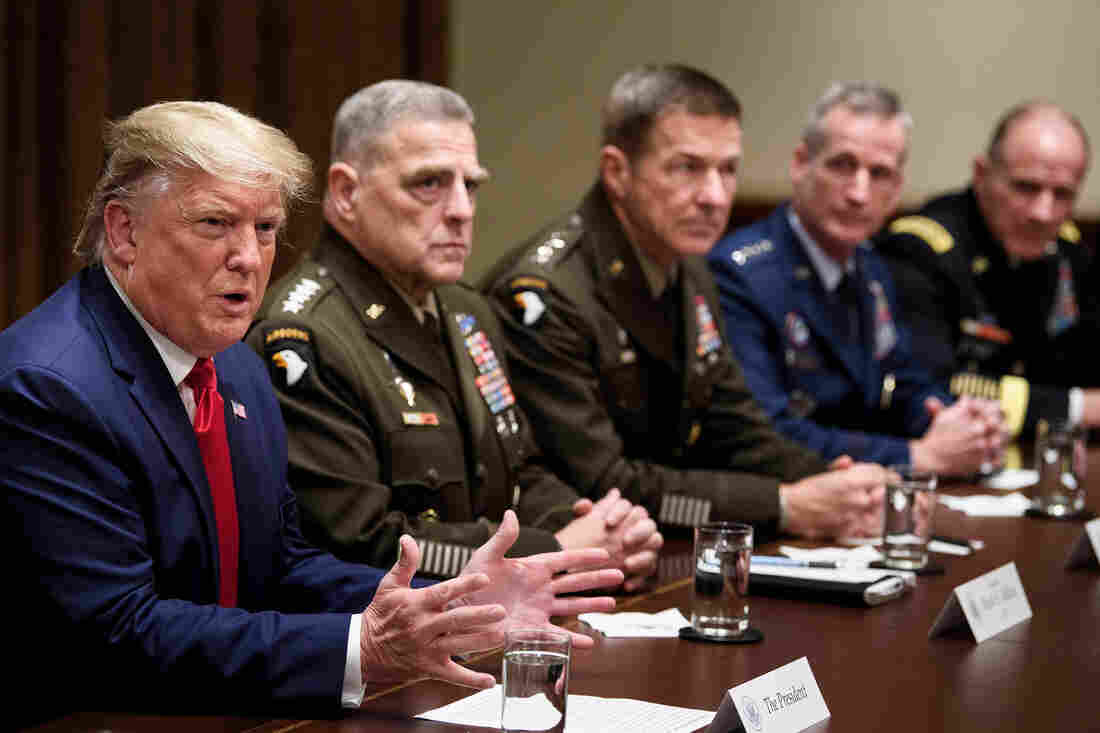 Army Gen. Mark Milley (second from left), chairman of the Joint Chiefs of Staff, and others listen as President Trump speaks during a meeting with senior military leaders in October. Brendan Smialowski/AFP via Getty Images hide caption 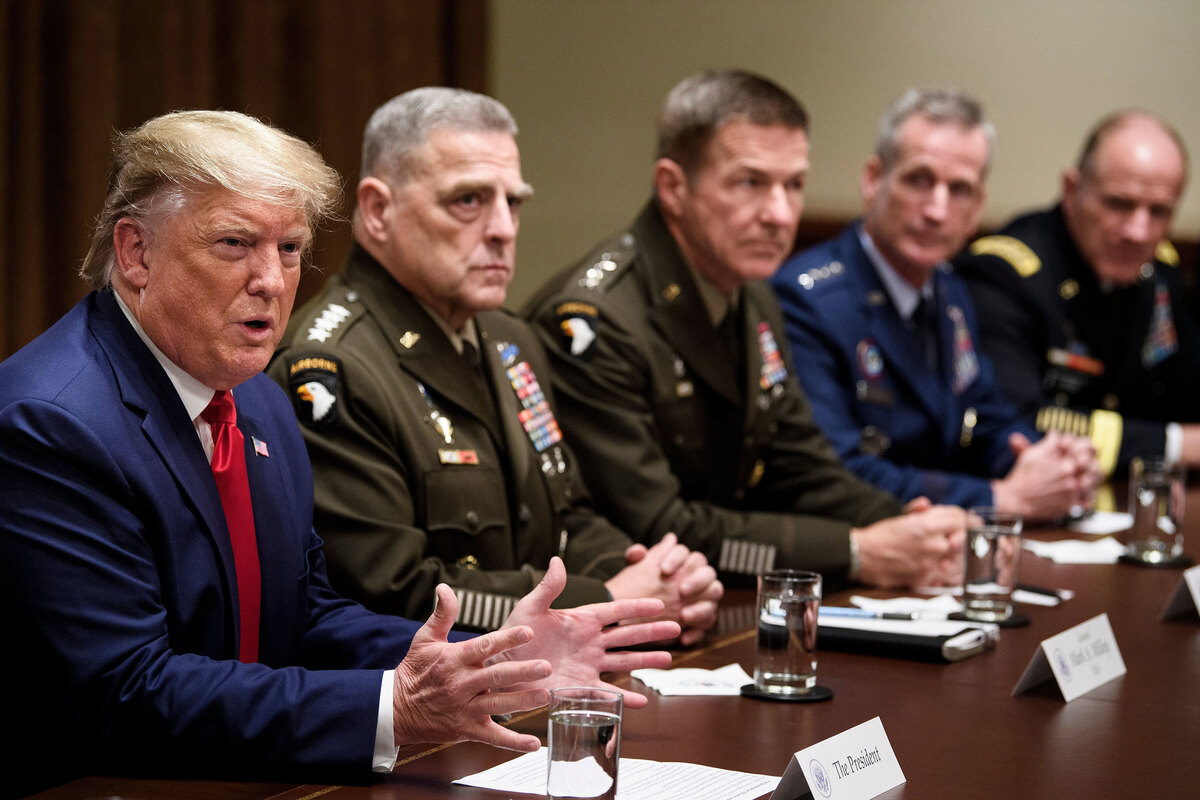 Army Gen. Mark Milley (second from left), chairman of the Joint Chiefs of Staff, and others listen as President Trump speaks during a meeting with senior military leaders in October.

During a press conference at the White House on Labor Day, President Trump lashed out at Democratic rival Joe Biden, claiming the former vice president threw open the borders, shipped away jobs and sent America's youth to fight in "crazy endless wars."

Then the president veered into talk of the military, taking aim at the Pentagon brass and separating them from the rank-and-file troops.

"I'm not saying the military is in love with me; the soldiers are. The top people in the Pentagon probably aren't because they want to do nothing but fight wars so that all of these wonderful companies that make the bombs and [make] the places and make everything else stay happy."

Eliot Cohen, a military expert at Johns Hopkins University's School of Advanced International Studies, could not recall such a character attack on top military leaders by a commander in chief.

"In a word, I don't remember anything remotely like this, ever," Cohen said. "FDR grumbled about [Army Gen.] Douglas MacArthur, but that was because he thought he wanted to be president. Other presidents grumbled about generals not doing what they were told, or not doing it quickly enough."

Richard Kohn, an emeritus professor at the University of North Carolina at Chapel Hill and a longtime observer of the military, said what's unusual is both Trump's harsh rhetoric and the public nature of it all.

"No president in my experience or in my scholarly work has ever made such disparaging remarks toward the military as a whole," he said. "A few have criticized some aspects of military service, or individual leaders at the top of the military, or even the leadership but almost always in private."

For example, President Barack Obama and his aides often complained the Pentagon leadership was trying to box them in over troop increases in Afghanistan — but always in private. John Kennedy told his aides the Joint Chiefs were too eager for military action during the 1962 Cuban missile crisis as opposed to the blockade he chose to end the crisis.

For Peter Feaver, an expert on civilian military relations at Duke University, Trump's comments and his actions amount to an effort to politicize an institution that's supposed to be nonpartisan.

"The U.S. military is right where it least wants to be," he wrote, "in the middle of the 2020 presidential campaign minefield."

The Pentagon had no comment on what the president had to say this week about "the top people in the Pentagon." But one senior officer — Gen. James McConville, the Army chief of staff — was asked to offer his views at a forum. He tried to tread carefully, insisting that recommendations to a president about military action have everything to do with national security and not business deals.

"I can assure the American people," McConville added, "that the senior leaders would only recommend sending our troops to combat when it is required in national security and in the last resort. We take this very, very seriously in how we make our recommendations."

"Even by Trump's standards, this blame the military approach is bizarre," O'Hanlon said. "It did not launch the Iraq or Afghanistan wars or anything else like that: The civilians made those calls. Indeed DOD leadership held Trump back from possible war in Korea three years ago, underscoring the risks of his brinkmanship and talk of 'bloody nose' attacks."

Still, Trump also appointed former Marine Gen. James Mattis to run the Pentagon — before souring on him. Mattis tried on a number of occasions to hold back Trump from taking military action — and toned down the missile strike on chemical weapons facilities in Syria.

Part of Trump's frustration likely comes from his failure to fulfill his campaign pledge to bring troops home from Afghanistan, Syria and Iraq. Trump actually increased U.S. troops to Iraq in 2017 by the thousands.

The U.S. Plans To Reduce Troops In Iraq

The U.S. Plans To Reduce Troops In Iraq

And while U.S. troops have decreased — or are decreasing — in all three countries, Trump complained about the continued American presence — and the money being spent. Even though, the Islamic State caliphate was "defeated 100%," the president was convinced by military leaders to keep hundreds of troops in Syria to prevent the Islamic militant organization from resurging.

"Some people don't like to come home. Some people like to continue to spend money," the president told reporters on Labor Day. "One coldhearted globalist betrayal after another, and that's what it was."

Moreover, Pentagon leaders have balked at other requests from Trump. When the president threatened to send in the military to quell protests and unrest after the death of George Floyd at the hands of Minneapolis police, Esper publicly said active-duty troops should not be used.

Sources said Trump was furious and threatened to fire him, though cooler heads prevailed.

And when Pentagon civilian and military leaders moved to ban the Confederate flag from military bases and favored renaming bases named after Confederate generals, the president disagreed, saying both were part of American heritage.

Add to all that the former senior officers and officials who have publicly — and sharply — criticized him. Mattis called Trump divisive. Retired Gen. Stanley McChrystal, questioned in a TV interview, labeled the president immoral, while retired Adm. Bill McRaven said Trump was a threat to the republic.

Trump lashed back, calling Mattis "overrated" and McChrystal "dumb" and dismissing McRaven as an "Obama backer."

A commander in chief, she said, "requires a consistent temperament for the good of the military as well as civilian leaders underneath the president."

Moreover, Schultz said Trump has tried to use the military as a political prop — or political enemy.

"At various points, [Trump] has referred to 'my military' or 'my generals' and with great affection," she said, "and apparently at other times with deep contempt."

It seems the president, the University of North Carolina's Kohn said, is trying to drive a wedge between officers and rank-and-file troops for political gain.

"Trump has from the beginning pandered to the enlisted force," Kohn said, "implicitly setting them against the officers just as he attacks other elites and poses as a champion of the mass of the American public."

All that likely adds to Trump's perception that there's a divide between the top brass and the rank-and-file soldiers. Trump did enjoy wide support among the enlisted ranks, more so than officers.

At the start of the Trump presidency, a poll by Military Times found that 46% of troops had favorable view of him, and 37% had an unfavorable opinion. Now those numbers have reversed.

In the latest results — based on more than 1,000 active-duty troops surveyed in late July and early August, about half — 49.9% — had an unfavorable view, while 38% had a favorable view.

Military leaders are aware they can be pulled increasingly into the election and have advised their subordinates and political leaders about their concerns. They are carefully watching to make sure they're not drawn into any overt political scenes.

Feaver, the Duke professor, remains concerned as well, especially in the next two months as the race tightens, and Trump looks to shore up support or expand his base.

"The first threat is the lingering possibility that violent protests on city streets will once again raise the prospect of President Trump deploying active-duty troops to support local law enforcement," he said. "It might be more likely than not that this issue will return as a live option before Election Day."

During protests in Washington, D.C., in June, Trump ordered active-duty troops to take part, but Pentagon officials kept them outside the city, preferring to use police and National Guard forces. But what if Trump insists next time?

For Feaver, "the really ominous threat" is the prospect of the military being drawn into a contested election "by forcibly preventing a losing candidate from grabbing political power."

Such a scenario has been suggested by military analysts and opinion writers, but readily dismissed by Pentagon officials. Still, Feaver said, "the concerns are palpable and likely to grow."

Members of Congress recently asked the top military official, Milley, about such a possibility.

"In the event of a dispute over some aspect of the elections, by law U.S. courts and the U.S. Congress are required to resolve any disputes, not the U.S. military," Milley wrote. "I believe deeply in the principle of an apolitical U.S. military."