Accessibility links
Huge Fire At Beirut's Port Causes Panic Following Last Month's Explosion The fire erupts at a warehouse storing oil and tires in the port's duty-free zone, sending waves of fear through the devastated city. By early Thursday evening, the fire was reportedly under control. 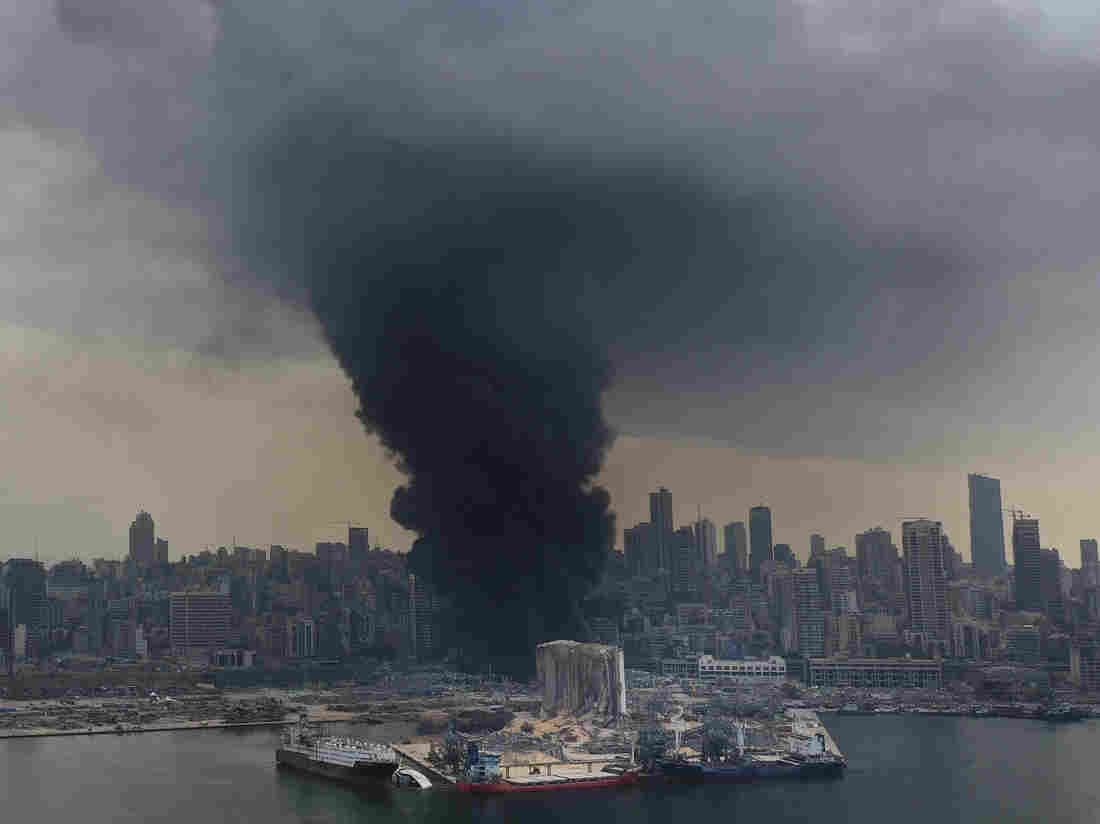 A column of black smoke rises from a fire Thursday at a warehouse at Beirut's port. A Lebanese official said the fire is under control, according to local media. Hussein Malla/AP hide caption 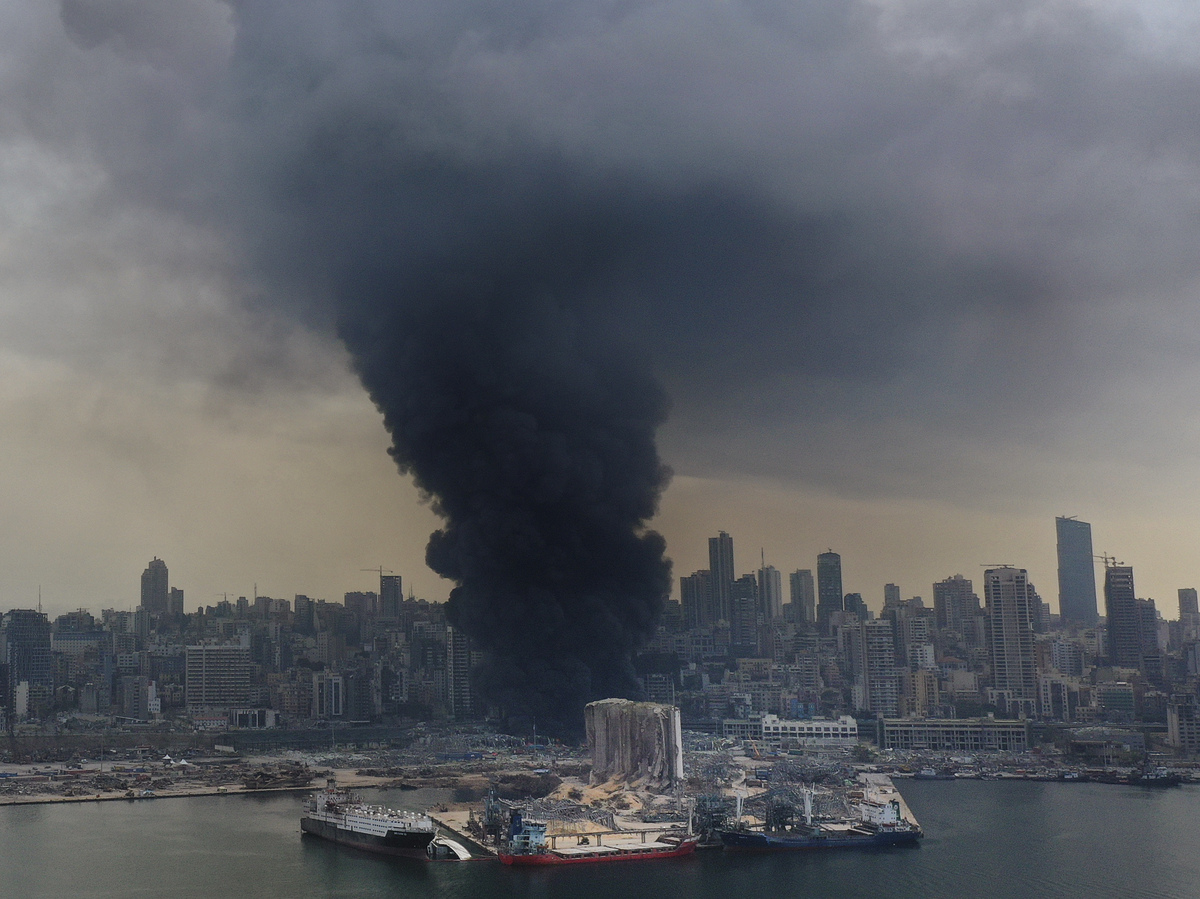 A column of black smoke rises from a fire Thursday at a warehouse at Beirut's port. A Lebanese official said the fire is under control, according to local media.

In Lebanon, a huge fire at Beirut's port has blackened skies and sent waves of panic through the devastated city, which is still reeling from last month's massive explosion in the same area that killed nearly 200 people and injured thousands more.

By early evening local time Thursday, the fire was said to be "under control" by caretaker Public Works Minister Michel Najjar, who is in charge of overseeing the port, according to local media.

The fire erupted at a warehouse storing oil and tires in the port's duty-free zone, according to the Lebanese army, and military helicopters were called in to help extinguish the flames. Video posted on social media showed smoke blanketing nearly all of Beirut.

The head of the Lebanese Red Cross, George Kettaneh, told local media that authorities did not fear another explosion due to the fire.

But as the flames spread, terrified port workers reportedly sprinted away from the scene, fearing a repeat blast. Some Beirut residents told NPR that they fled the city.

The army called for the evacuation of citizens from the port and its surrounding roads, and Kettaneh warned that people should wear masks and close their windows.

Save the Children said in a statement that the fire could have a significant impact on children's physical and mental health so soon after August's blast.

"Children in Beirut have experienced a terrible shock, and they need time to recover; today's fire and panic will only make things worse," said Jennifer Moorehead, Save the Children's country director in Lebanon. 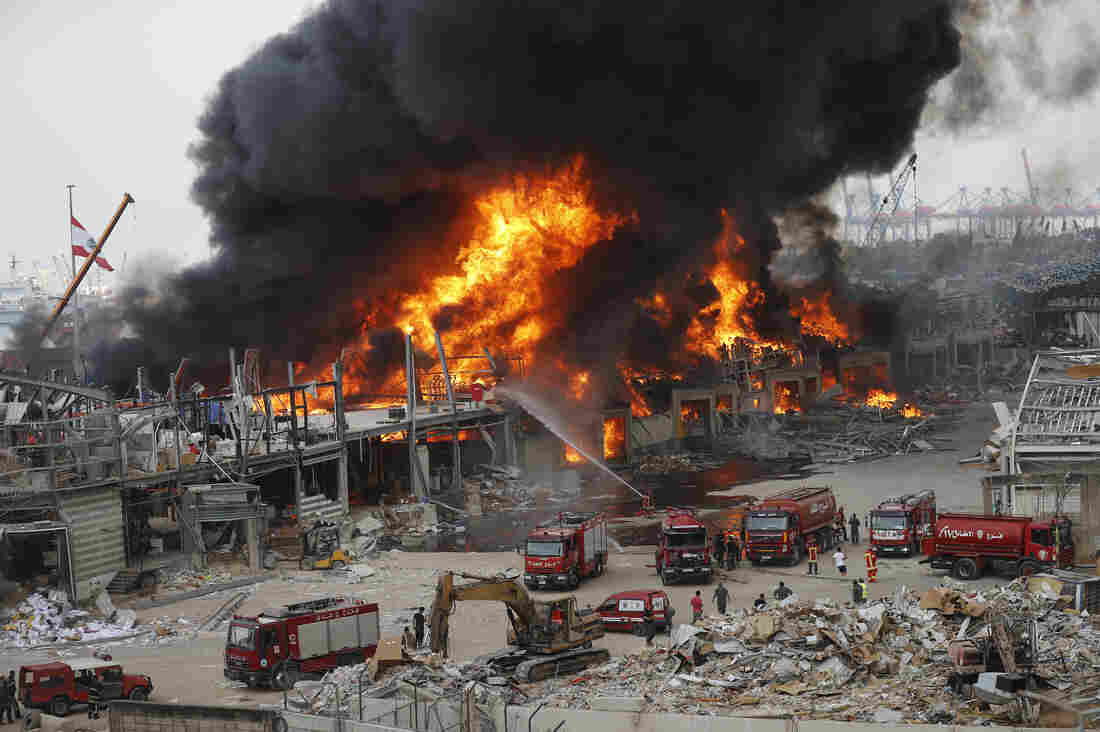 The catastrophic explosion on Aug. 4 started as a fire that ignited nearly 3,000 tons of ammonium nitrate stored haphazardly for years in Beirut's port. It later emerged that high-ranking politicians and government employees had been aware of the massive amount of explosives but did not address the issue.

It wasn't immediately clear what ignited the fire Thursday. Port director Bassem al-Qaisi told local media that it is "too early" to know the cause, and Lebanese Prosecutor General Ghassan Oweidat has called on security forces to conduct an immediate investigation.

Najjar, the caretaker public works minister, told local media that sparks from welding at the warehouse might be the cause. It is also thought to be what sparked last month's fire that caused the explosion, damaging thousands of buildings in Beirut.

Just last week, more than 4 tons of ammonium nitrate were discovered in the port during an official inspection. It was removed but stoked anxieties among residents that any fire at the badly damaged port could trigger another blast.

Earlier this month, a surge of hope emerged as rescue teams thought they had detected something miraculous — possible signs of life in the rubble of a building nearly a month after the blast. Sadly, after three days of careful digging, the rescue team concluded there was no survivor to be found.